Esthetics is a prime factor for people. It becomes crucial when it is related to teeth. Natural teeth add beatification to the face. Any lost teeth needs to be replaced. Earlier, missing teeth were replaced by removable partial denture (RPD) followed by fixed partial denture (FPD). Both carry its disadvantages.1 Patients feel difficult in wearing RPD due to the presence of clasps which may impinge into the soft tissue leading to local trauma. This shortcoming has been replaced by FPD though, for one missing tooth, the tooth anterior and posterior to it requires cutting. This is the biggest drawback with FPD, and moreover, sensitivity of abutment teeth after crown reduction plays an important role in decreasing trend of FPDs among patients.2

Dental implant has emerged as new treatment moda­lity for edentulous areas. Nowadays, dental implants are considered as the method of choice for replacing missing teeth. It has ability to restore the functional and esthetic need of patients. The placement of implant provides benefit to the patient as it provides good esthetic results with no crown preparation as is done in case of FPD. Although it has become the treatment of choice for most of the dentists, still the complications arising from dental implant placement are the biggest challenge.3

Maxillary anterior teeth are more prone to fracture in children and are considered to be esthetically important teeth. The success rate of dental implant in maxillary anterior region depends on location and angle of implant. The adequate distance between implant and anatomical structures is the foremost requirement. The NPC is a bony connection between the nasal and oral cavities and contains relative neurovascular bundle. The thorough knowledge about the anatomical variations of the NPC is fundamental for avoiding neurovascular bundle damage.4

Earlier, the implant site was assessed with the help of two-dimensional (2D) imaging modality, such as intraoral periapical radiograph and panoramic radiographs. Since these imaging modalities are 2D, there are restrictions of implant planning leading to implant failures.5 With the advent of CBCT, this limitation has been overcome. Cone-beam computed tomography provides all three dimensions and has been proved as tool to radiology, especially in the success of implant. It provides high spatial resolution and offers less patient exposure as compared with full-mouth radiographs and CT. Cone beam computed tomography images become essential when there is the proximity of area to vital structures.6 The present study was conducted to determine the variation in morphology of NPC with the help of CBCT images.

This study was conducted on 460 patients. All were informed about the study, and written consent was obtained. Ethical clearance was taken from the institutional ethical committee. Inclusion criteria were patients above 18 years of age. However, patients with cleft lip/palate, impacted teeth, and any pathology of NPC were excluded from the study. 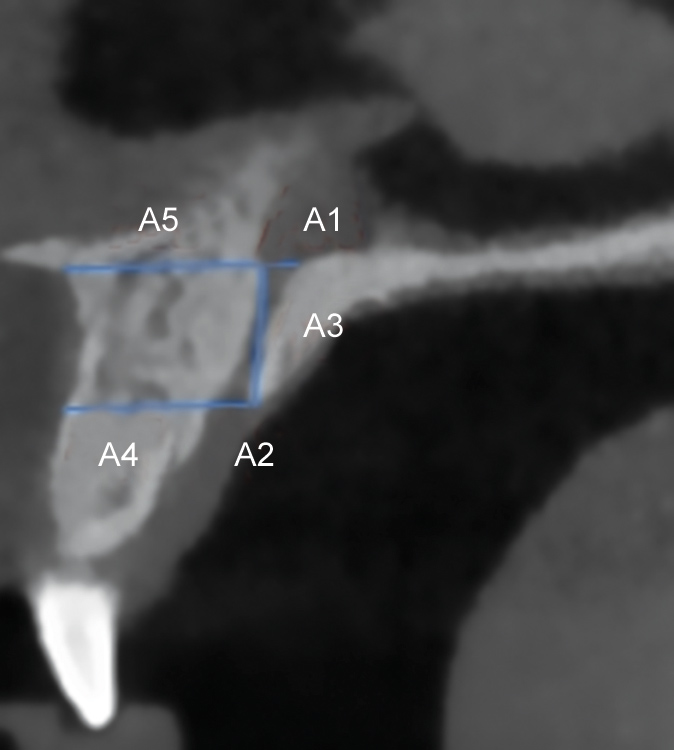 All were subjected to CBCT using NewTom machine with the field of view of 11 cm × 8 cm and resolution of 0.3 mm × 0.3 mm × 0.3 mm operating at 120 kVp at 5 mA. The NNT software with slice thickness of 0.1 mm was used in this study. All CBCT images were assessed for NPC dimensions (sagittal sections) and anatomy (coronal sections). The analysis was performed by expert radiologist. Sagittal sections of CBCT images were used for the measurements of dimensions of the NPC. Following measurements were carried out: A1—diameter of nasal opening, A2—diameter of oral opening, A3—length of the canal, A4—width of the buccal bone plate over the oral opening, and A5—width of the buccal bone plate over the nasal opening (Fig. 1).

Effect of gender on measured dimensions 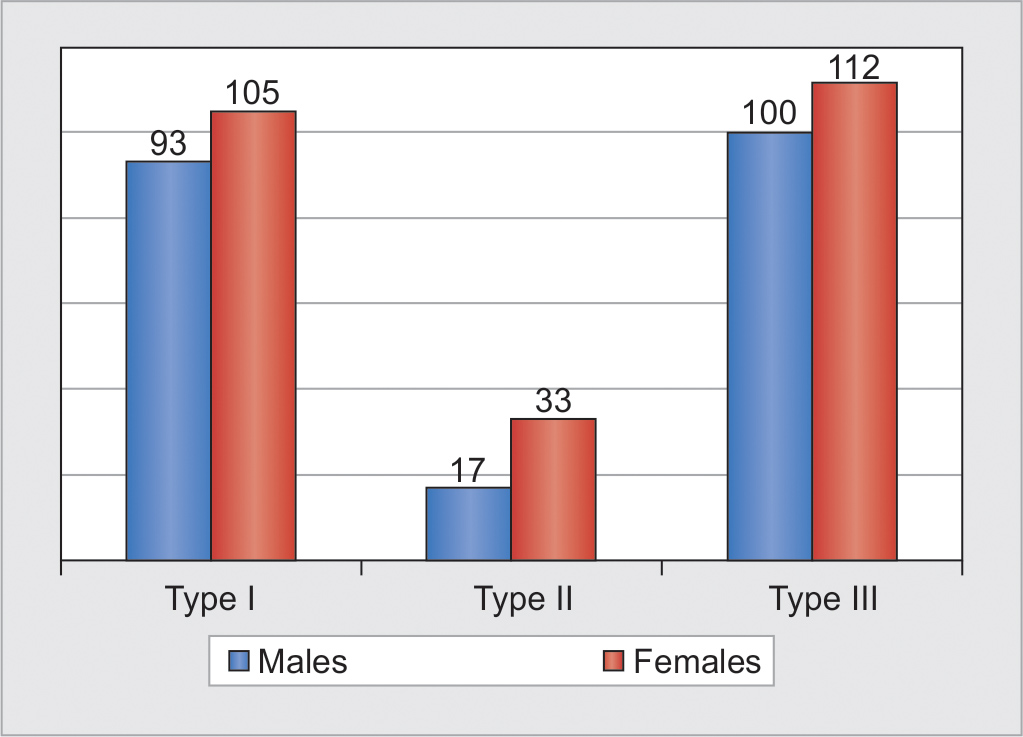 Maxillary anterior teeth play an important role in the development of esthetics of an individual. These teeth are more vulnerable to get fractured. With the advent of implants in dentistry, the replacement of missing maxillary anterior teeth has become easy. It has nowadays preferable choice of patients also. For the placement of dental implant in anterior region, the exact location and morphology of NPC are the foremost requirements.8 Several previous studies have studied the pathology in regard to NPC region, but the anatomical disparity in the dimensions and morphology of NPC remain poorly acknowledged. The present study was conducted to determine the morphology of NPC.

Song et al9 have demonstrated that the length of the NPC is 12.0 mm (8.4–15.8 mm) in dentulous maxillae, and Mraiwa et al10 have reported a mean length of 8.1 ± 3.4 mm. In our study, we included 460 patients of both genders. The mean length of NPC was 11.40 ± 2.52 mm in males and 9.38 ± 2.44 mm in females. Males showed significantly more length as compared with females. Our results are in agreement with Safi et al11 We found the effect of gender on measured dimensions of NPC. It was found that diameter of nasal opening (A1), oral opening (A2), and width of the buccal bone plate over the oral opening (A4) were significantly higher in males as compared with females. This is in agreement with Acar and Kamburoğlu.12

Albeit, a recent study conducted by Nasseh et al13 observed that the form of the NPC is variable: predominantly cylindrical or funnel shaped. For the canal length, the inclination related to the hard palate, and the incisive foramen anteroposterior diameter, no statistical significance between genders was observed except for the canal height that was found shorter in females.

Kajan et al14 in their study on Iranian population found that mean values for oral and nasal opening of NPC were 3.53 ± 1.01 and 3.7 ± 2.3 mm respectively, whereas in the present study, it was 3.38 ± 1.52 and 3.40 ± 1.02 mm in males and 2.90 ± 1.42 and 2.98 ± 1.00 mm in females. In our study, we found that type III canals were higher in both males and females as compared with types I and II. Similar findings were seen in a study by Güncü et al15 who found type III canals in 46.5% of study population. Thakur et al16 did not reveal statistically significant differences in the number of openings at the nasal fossa, diameter of the nasal fossa openings, and diameter of the incisive fossa.

We evaluated width of buccal cortical bone in different forms of NPC. There was no statistically significant difference in different canals. Bronstein et al7 in their study found that buccal bone plate is affected by gender.

The shape, curvature, and angulation of the canal and its anteroposterior dimensions are the imperative factors for placement of implants in the maxillary incisor region. In addition to this, the number of openings, length of the canal, mediolateral dimensions, and level of its division may prove to be a significant parameter when implants within the NPC are being considered. In dental status, the periodontal condition of remaining central incisors should also be evaluated when the bone level and NPC dimensions are assessed.

Peñarrocha et al18 conducted a study on 13 patients having atrophic edentulous maxillae with a mean age of 54.8 years, which includes 5 males and 8 females. Seventy-eight implants were placed: 13 in the NPC, 12 in the pterygomaxillary region, 6 in the zygomatic bone, 2 in the frontomaxillary buttress, and 45 in other locations. A reduced sensitivity was noted in six patients in the anterior palate after surgery, which resolute in all cases within a few weeks. Two nasopalatine implant failures were observed before prosthesis placement, and no failures was recorded after prosthetic loading of implants. A high success rate of 84.6% was observed after an average follow-up of 2 years. They inferred that NPC can be considered as a possible site for an anterior implant placement when restoring atrophic patients using implant-supported prostheses.

Cone beam computed tomography has revolutionarily changed the dental implant success rate. The complexity of NPC can be well visualized by the three-dimensional imaging modality, such as CBCT. It has the advantage of providing fine details in all three sections, such as sagittal, coronal, and axial. Thus, the placement of dental implant in maxillary anterior region is no more a complex procedure.1

The exact morphology and shape of NPC can be determined with the help of CBCT images. All three sections, especially sagittal and coronal views, provide useful information. Morphology and anatomy of nasoplatine canal can be considered as an important parameter when implants within the NPC are being considered.

The limitation of 2D imaging has been overcome by the advent of CBCT. With this imaging technique, the exact approximation of anatomical structure from dental implant can be determined, thus ensuring the success of treatment modality.