The uses of ceramics are not new in dentistry. Ceramics, especially Y-TZP, are widely used in dentistry, especially in the field of prosthodontics and restorative dentistry because of their excellent mechanical, physical, and optical properties.1 However, during certain procedures such as CAD–CAM machining and grinding, use of diamonds, stone, and abrasives and during sterilization procedures resulted in the development of surface flaws,2 leading to stress concentration at specific sites.3

The Y-TZP ceramics demonstrated superior strength due to its phase transformation phenomenon. During this phenomenon, there is approximately a 4% increase in volume due to tetragonal to monoclinic transformation.4 This transformation may also occur during air-particle abrasion, grinding, and temperature changing during autoclaving as low thermal degradation.5,6

There is a wide variety of CAD–CAM zirconia materials available in the market, which have shown excellent physical and mechanical properties when compared with high alumina ceramics.7 However, it is unclear whether or not a different surface treatment along with low-temperature aging and ML affects the physical properties of CAD–CAM-machined Y-TZP ceramic.

Hence, the goal of this study is to assess and compare the influence of different surface treatments and their accumulative effect on biaxial properties and phase transformation of Y-TZP ceramics.

Fifty disk-shaped specimens of Cercon® base (Degudent, Hanau, Germany) (Fig. 1) were prepared as per International Organization for Standardization (ISO) 6872 1995 standard. The standard described that a test piece should have a minimal thickness of 1.2 ± 2 mm and a diameter of 12 to 16 mm. The specimens were initially milled in large dimensions to compensate for the shrinkage occurring during sintering. In the previous surveys, it was noted at around 25% for Cercon. The specimens were then sintered in a sintering oven at 1,350°C for about 1.5 hours as per the manufacturer recommendation. The materials used in this study are presented in Table 1.

The groups are organized as follows:

Control group (C): Consisted of CAD–CAM-machined specimens. Not subjected to any treatment after fabrication. 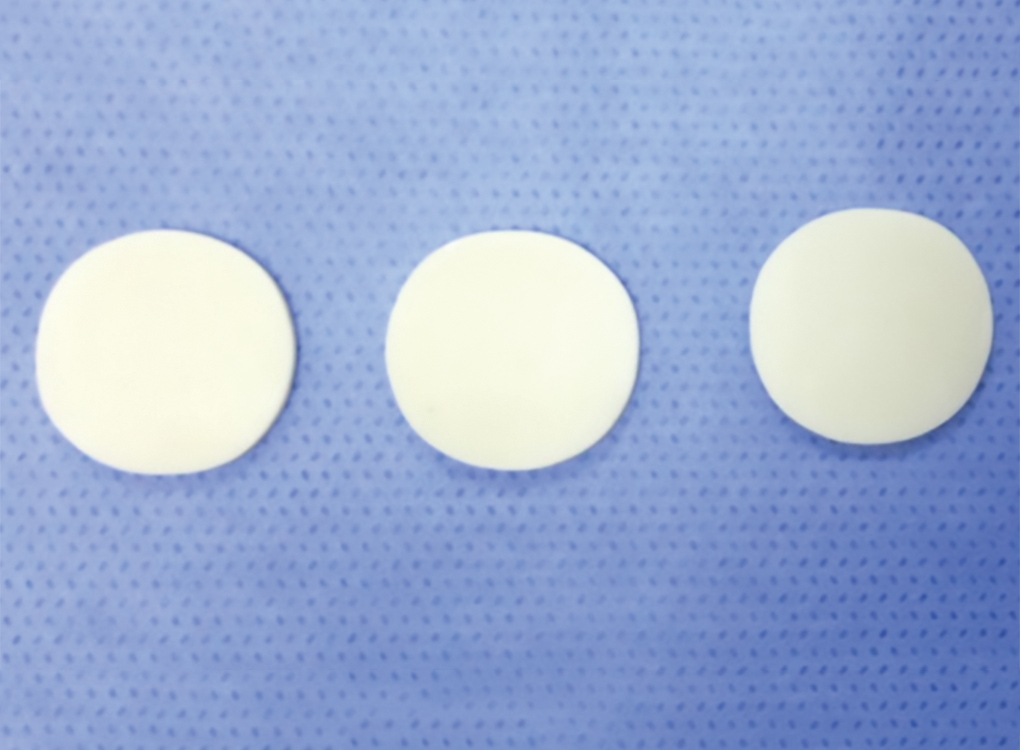 Brand, composition, and manufacturers of materials used in this study

Air-particle abrasion group (Si): Specimens were sandblasted with 30 μm silica-coated alumina particles (CoJet™ sand) at 0.28 mm pressure. After sandblasting, all the specimens were cleaned in the ultrasonic cleaner for 10 minutes.

ML group: A cyclic load of 10,000 cycles was applied centrally to the specimen in 37°C water at 2 Hz using the load between a minimum and a maximum force from 20 to 250 N. During the loading, the maximum force was set to mimic occlusal loading in the posterior tooth region, which was approximately 25% of mean biaxial flexural strength.

LTD group: Specimens were autoclaved at 127°C at 1.5 bar pressure for 12 hours, which induces LTD in zirconia.

Density measurements: It was performed on each sintered specimen using the Archimedes principle, calculated using the equation

The testing was executed as per ISO 6872 spec. Instron 8871 Servohydraulic system (Instron®, US) was employed (Fig. 2). A jig was constructed to contain the specimen. It was designed with a support circle of 11 mm diameter, and three steel balls were positioned at 120° angles. A loading pin was used of length 2 mm and a diameter of 1.5 mm. Samples were placed on the supporting balls and then loaded with indenter at a crosshead speed of 1 mm/min until a fracture occurred. Failure load was recorded using graph data manager software. Biaxial flexural strength (MPa) was calculated using following formula as per ISO 6872 1995 standard. 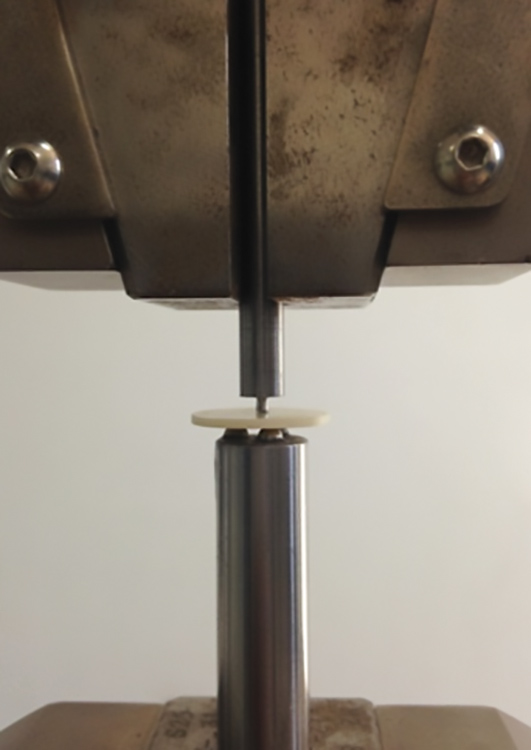 The XRD analysis was carried out to determine the crystalline phase. Five specimens were taken from each group for the analysis. The XRD data were obtained with a θ-20 diffractometer r (Models: Rigaku Ultima IV and JEOL JDX 3530) using Cu–Kα radiation. Garvie and Nicholson’s method was applied to determine the monoclinic phase in samples. It is stated in terms of percentage of tetragonal phase that was transformed to monoclinic phase.

where I = intensity at angular position 20°. 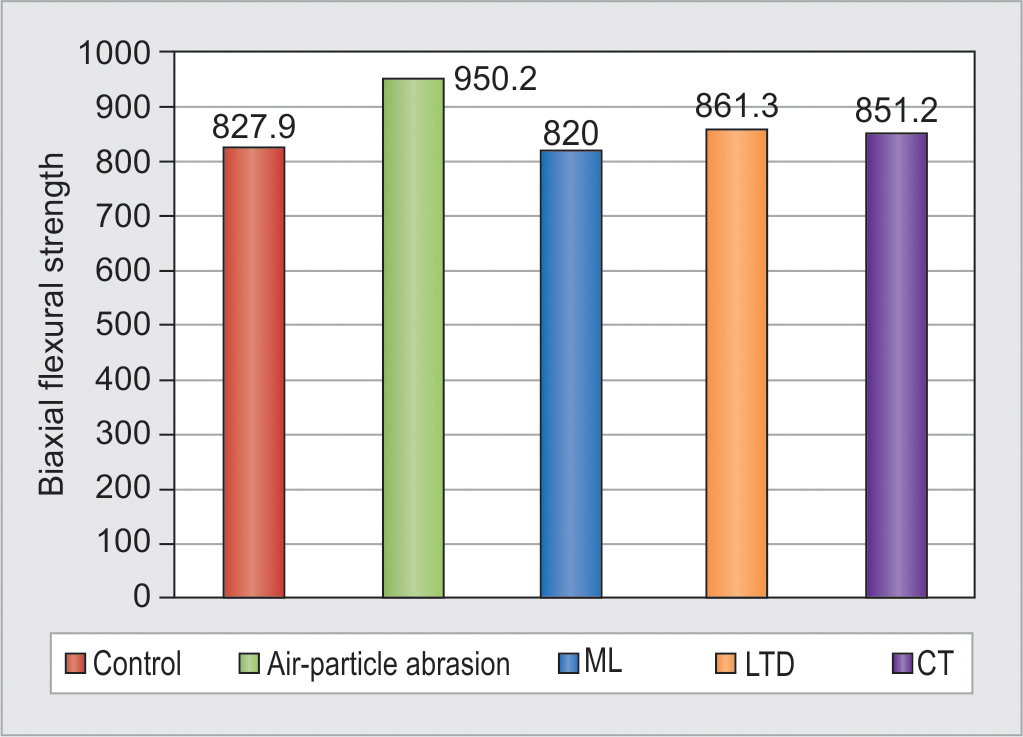 Weibull analysis was borne away to see the variability of flexural strength values. The formula used is as follows:

*The mean difference is significant at the 0.05 level

Relative amount of monoclinic zirconia (%) of the tested groups

Table 5 shows that there was no monoclinic phase present in the control group; however, another group showed a variable amount of m phase. The variation was observed from 0 to 27%. Si group and the ML group showed 8 and 6.2% m phase respectively. The LTD and the CT groups showed variations in the m phase from 26.43 to 12.58%.

As observed in previous studies, airborne-particle abrasion during sandblasting or polishing procedure may create internal flaws. The results of this study indicated that after airborne particle abrasion with 30 µ silica-coated alumina particle, there was an improvement of biaxial flexural strength of specimens. This can be explained by the fact that tetragonal to monoclinic phase transformation creates a layer of compressive stress that counteracted the degradation of strength by surface flaws. However, the surface flaws created by sandblasting have not exceeded the compressive layer thickness, which could have resulted in a decrease in strength rather than an increase in strength.12

In this study, air-particle abrasion resulted in approximately 8% monoclinic to tetragonal phase transformation. Studies in the past have shown similar results, where the authors have found that the improvement of strength was because of an increase in monoclinic phase percentage.13-16 A study conducted by Zhang et al17 concluded that increase in strength of Cojet sandblasted specimens was attributed to their smaller size as well as their soft and round configuration. Curtis et al18 reported similar behavior with 25 µm Al2O3 particles.

The results in this present study showed that the mechanical cyclic loading at 10,000 cycles in water, using a force of 250 N, did not significantly (p ≥ 0.05) affect the biaxial flexural strength of specimens. These findings are in agreement with a study conducted by Itinoche.19 However, the ceramics used were different from the current study. Curtis et al20 evaluated the effect of biaxial flexural strength of zirconia after subjecting the specimens under various forces varying from 500 to 800 N for 2,000 cycles and found that the strength of samples was not deteriorated.

The present study’s LTD has not shown any significant reduction in biaxial flexural strength of specimens. Previous studies have shown that autoclaving at 134°C for 1 hour has the same effect of 3 to 4 years of aging.21,22 Therefore, accelerated aging test was performed with autoclaving at 134°C for 10 hours under 0.2 MPa pressure, which induces LTD in zirconia.22 Similar findings have been reported by Pröbster and Diehl.23 Another study reported that there is no statistically significant difference in flexural strength of zirconia aged at 37°C for 1 year.24

Shimizu et al25 carried out an experiment to determine the effect of temperature on the specimen flexural strength after placing them in saline solution for 3 years and distilled water at 121°C for 2000 hours. His investigation confirmed that there was no significant change in flexural strength in ceramic specimens even after such long LTD treatment.25

An interesting finding of this present study was that the biaxial flexural strength of the CT specimens increased as compared with the control (C) and ML but less as compared with air-particle abrasion group (Si) and LTD group. This can be explained by the fact that compressive force generated by tetragonal to monoclinic transformation has overcome the deteriorating effect of different surface treatment. The same observation was reported by Guazzato et al26 and Kosmac et al12 in their studies, where they had observed the effect of air-particle abrasion and aging.

The “m” values observed in this study were in the range of 5 to 15. These are the normal values quoted for dental ceramics.14 However, previous studies have shown higher values.3,27-29 Few groups demonstrated less Weibull modulus as compared with control group. This signifies that surface treatment might have affected the reliability of clinical performance of ceramics. Weibull values were demonstrated in Table 2. However, larger Weibull values represent that there are fewer critical flaws and indicate a smaller error in judgment of clinical strength.14

Characteristic properties of zirconia are attributed to its tetragonal to monoclinic phase conversion. The observations of the present study are in agreement with previous studies, where the C group consisted of 100% tetragonal zirconia.3,12,30

The Y-TPZ remains stable in the tetragonal state between 1,145°C and below room temperature. Different surface treatments such as air-particle abrasion or ML lead to phase transformation.3,12,14,31,32 This could be explained by the fact that when they are exposed to stress, change in crystal cell structure occurs due to tetragonal to monoclinic transformation.33,34

One of the major shortcomings of this study was that it does not mimic the clinical condition exactly, which may produce different results due to the presence of saliva and pH changes. The long-term evaluation of the zirconia restoration under clinical condition should also be studied, especially for long span.

The conclusions are as follows:

Source of support: This study was supported by Grant No. 2015230 from Scientific Research Project of the Deanship of Research, University of Dammam, Kingdom of Saudi Arabia.