Odontogenic infections originate from a tooth or from its supporting structures, generally secondary to a pulp necrosis, periodontal disease, pericoronitis, apical lesions, or complications of dental procedures, which can be restricted to the alveolus or can reach the jaws and face through maxillofacial spaces.1 The course of the disease depends on the balance between patient’s condition and microbial factors, that is, the combination of virulence of microorganisms, and local and systemic conditions of the patient determine host’s resistance.2

Multispace infections in the head and neck are less common nowadays because of the improvement of oral hygiene and widespread use of antibiotic therapy.3 However, researches debating the progress of odontogenic infections to deeper spaces of the neck were performed during the past decade, indicating high prevalence rates around 27%.4,5

The purpose of this study is to report a case of a multispace infection involving the upper-, middle-, and lower-thirds of the face due to a odontogenic infection and to discuss about the management of this serious condition.

A 47-year-old female patient was admitted to the emergency room of a public hospital in Campina Grande, Paraíba, Brazil, reporting severe pain and cervical-facial volume increase for approximately 10 days associated with mandibular trismus, odynophagia, headache, and nausea, without focal neurological deficits. The patient had type II DM decompensate, denied allergies and presented conscious, eupneic, stained, presenting with high fever, and toxemic aspect. Physical examination revealed edema and erythema in the cervical, submandibular, periorbital, and temporal regions on the left, and hard and painful swelling associated with some floating points. The left visual acuity was preserved; however, it presented restriction and pain to the movement of the ocular globe (Fig. 1). 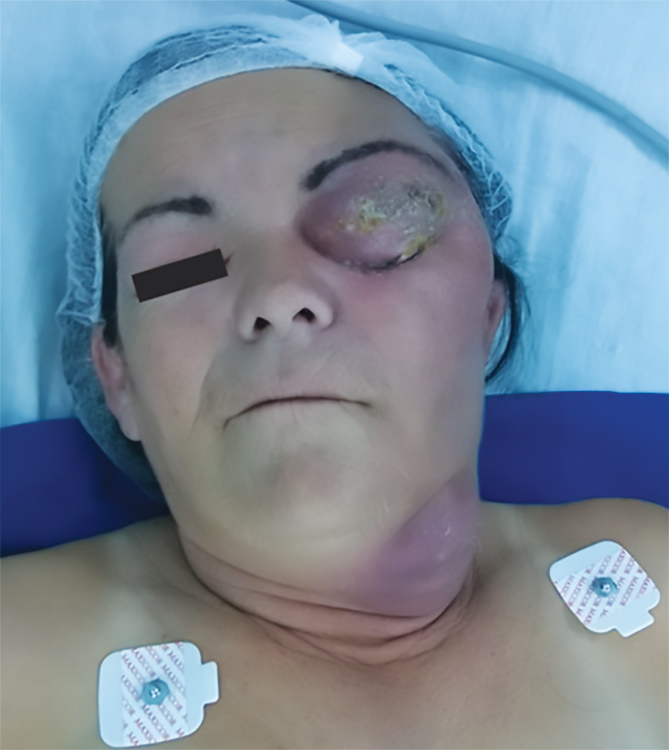 Computed tomography (CT) scans (skull, cervicofacial, and chest) revealed thickening and densification of the subcutaneous cellular tissue in the left frontoparietal region extending to the ipsilateral cervical region with the presence of gaseous foci extending from the most cranial point of the orbit level and (Fig. 2) heterogeneous thickening and appearance of areas of hypoattenuation in the ipsilateral masticatory muscle and sternocleidooccipitomastoid, corresponding to fluid content. Thoracic and cervical CT showed an area with attenuation of soft parts, anterior to the musculature, leading to a bulging of the region; however, no mediastinal impairment was revealed.

Thus, according to the anamnesis, as well as the physical and imaging exams, the diagnostic hypothesis of odontogenic cervicofacial infection was raised. In spite of the clinical severity of the condition, emergency hematological tests revealed a slight leukocytosis (12700/mm3) with increased segment (83%, 9,960/mm3), with no left shift and glycemia of 230 mg/dL.

A first emergency surgical drainage was performed covering areas with fluctuation points in the orbital, retro­auricular, and left submandibular regions. After clear elimination of the pus, culture material was collected, followed by the removal of the infected roots from the jaws, and then Penrose drains number 1 were inserted. Empirical antibacterial therapy with ceftriaxone (1 gm IV 12/12 hours) and metronidazole (500 mg IV 8/8 hours) was prescribed in combination with parenteral hydration and administration of analgesics and hypoglycemic drugs. Eight days after the first surgical approach and before the result of the culture/antibiogram (presence of Gram-negative bacilli – Pseudomonas spp.), a second surgical drainage was needed to eliminate residual fluid content. The antimicrobial schedule was changed to levofloxacin (750 mg IV 1×/day) associated with meropenem (1 gm IV 8/8 hours) according to the antibiogram. 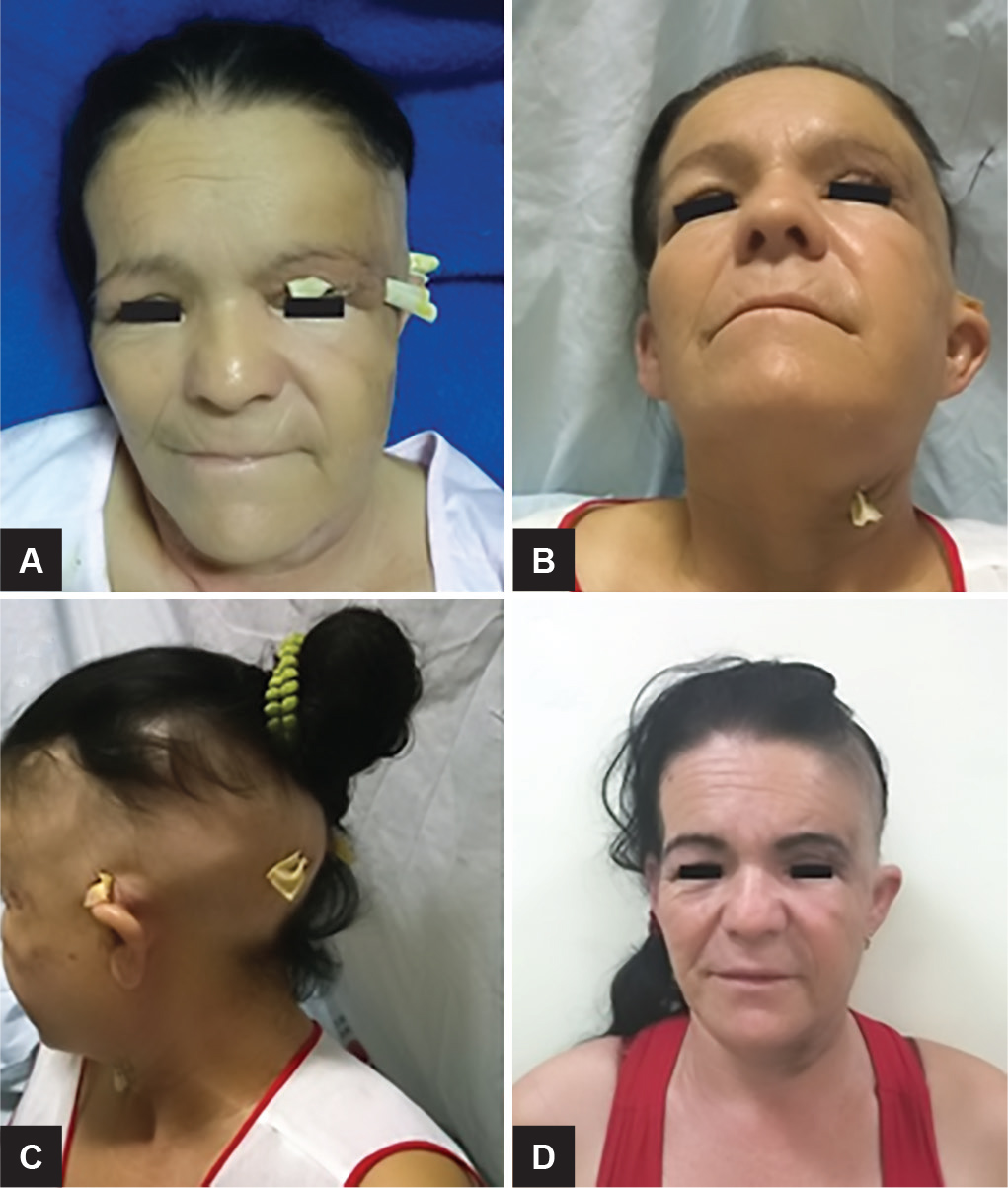 The drains were removed 72 hours after surgery, the patient progressed satisfactorily with total remission of the infectious condition, without any ocular sequelae, with a good range of mouth opening, and was discharged 25 days after the initial hospitalization (Fig. 3).

Odontogenic infections are the most common cause of head and neck infections. Its clinical presentation is highly variable depending on the location of the dental focus and whether or not the infection is spotted.1 According to the study of Procacci et al,11 infections can spread to the orbit along four principal pathways: First and most commonly from molars or premolar root into the maxillary sinus. Then, the inflammatory process spreads to the orbit through bone erosion of the orbital floor or through the ethmoid sinus or infraorbital channel. Second, from soft tissues between the buccal cortical plate and periorbital tissues; and third, infections spread initially to the infratemporal or pterygopalatine fossa and then reach the orbital cavity though the inferior orbital fissure, and least but not less important, by hematogenous spread through facial and ophthalmic veins and consequent septic embolization and thrombophlebitis.

Infections that reach the orbital cavity can cause impairment of visual acuity, proptosis, pain and limited ocular motility, extraocular muscle palsy, pupil dilation, rising of intraocular pressure, and visual loss. Abscesses that extend to the posterior orbital space can be life-threatening because the infection can spread through the optic canal and ophthalmic veins to the meninges and reach the brain.12,13 The infection also might spread downward reaching the submandibular and sublingual space which can lead to Ludwig’s angina and mediastinitis.3 Ludwig’s angina is a serious head and neck condition characterized by rapid progression with edema, odynophagia, trismus, and necrosis of the soft tissues of the neck and mouth floor and is associated with a high mortality rate.1,2 In our case, the patient presented with signs of involvement of the orbital region with edema, erythema, restriction and pain during ocular movements, submandibular edema, trismus, and odynophagia but without loss of visual acuity and airway or mediastinum involvement.

About the treatment of odontogenic infections, clinical and surgical approaches have been described in literature. The use of antibiotics is proposed as unique therapy or in association with a surgical treatment. However, surgical incision and drainage combined with the immediate or secondary removal of the odontogenic focus are based on the therapy.6,11,12,14 A comprehensive imaging of odontogenic space infections is achieved by CT with soft tissue windows or possibly by magnetic resonance imaging to thoroughly evaluate the soft tissues involved. Contrast-enhanced CT can indicate the location and the relation of the infections to neurovascular structures, where abscesses appear as hypodense area with an enhanced rim.15 Computed tomography was used in the present case showing hypodense areas with presence of gaseous focus that extended from the left temporal space to ipsilateral submandibular space.

The involved microbiota in odontogenic infections is polymicrobial consisting of Gram-negative and Gram-positive anaerobes and facultative anaerobes, such as anaerobic coccus, Prevotella, and Fusobacterium species.6 Since microbiology and antibiotic sensitivity of dental infections are well known, it is acceptable to initiate empiric treatment without culture and antibiograms using one of several known antimicrobial schedules (penicillin, amoxicillin, clindamycin, and metronidazole).1 However, in severe cases, such as cervicofacial infections or involving multiple fascial spaces, it is prudent to collect sample for culture and antibiogram.

Sharma et al,9 in a retrospective study of 445 cases of cervicofacial infections, found that cases which involve Gram-negative bacilli tend to have more complications with persistence of the infection, requiring repeated surgical approaches. This also occurred in the present case where there was the persistence of the infectious disease needing a second surgical approach and a positive result for Gram-negative bacilli (Pseudomonas spp.) on culture. Similarly, initially empirical antibiotic therapy was introduced during emergency therapy (ceftriaxone and metronidazole), and consequently, modified according to the result of the obtained antibiogram (meropenem, levofloxacin, and metronidazole).

Some systemic alterations are described in the literature as factors that predispose dissemination and perpetuation of the infection as decompensated DM, because it affects the response of the immune system of the host. Although this fact still seems to be controversial inside the literature, some studies show a positive correlation between DM and odontogenic infections,3,7,8 while other authors state that such correlation is not true.9,16 For Rao et al,16 the length of hospital stay of diabetic patients can be attributed to the control of glucose levels rather than the resolution of infection. In our case, the patient had a background of decompensated DM with glycemic levels above 200 mg/dL and presented with persistent infectious disease even after reestablishment of glycemic levels within normal limits, leading to a longer hospitalization time (25 days).

Although the prevalence and complication incidences of odontogenic infections had decreased due to the advancement of diagnostic techniques, availability of effective antibiotics, and improvement in oral hygiene, still there are conditions that require attention and appropriate treatment to prevent a progression of the disease to deeper fascial spaces. In cases of cervicofacial infections, besides an earlier diagnosis, an appropriate treatment is crucial to save patients’ lives.

Odontogenic infections can be treated without severe damages if approached earlier in the onset of their clinical manifestations. However, if this treatment is postponed and the infection spreads into deeper fascial spaces, it can compromise vital structures, and consequently, threaten the patient’s life. In these cases, extensive and aggressive treatment should be performed.