Prevalence of a Second Root and Canal in Mandibular and Maxillary Canines in a Saudi Arabian Population: A Cone-beam Computed Tomography Study

How to cite this article Mashyakhy M. Prevalence of a Second Root and Canal in Mandibular and Maxillary Canines in a Saudi Arabian Population: A Cone-beam Computed Tomography Study. J Contemp Dent Pract 2019;20(7):773–777.

Aim: This study evaluated the prevalence of a second root and canal, gender differences, and bilateral symmetry of mandibular and maxillary permanent canines in a Saudi Arabian population using a cone-beam computed tomography (CBCT).

Materials and methods: The first step was to evaluate CBCT images of 208 patients with 794 canines (410 mandibular and 384 maxillary canines). The second step was to identify the number of roots, number of canals, and canal configurations based on Vertucci’s classification to investigate the prevalence of a second root and a second canal, gender differences, and bilateral symmetry. A Z test evaluated differences in the independent proportions; a Chi-square test determined differences between genders and Cohen’s Kappa test assessed bilateral symmetry.

Clinical significance: Mandibular canines showed bilateral asymmetry (8.9%) in the number of canals between the right and left sides, which could be of clinical importance when planning root canal treatment (RCT) on contralateral canines.

Increasing knowledge of root canal morphology is essential for proper root canal treatment (RCT). Anterior teeth in the maxillary jaw mostly have a simple and straightforward morphology that generally presents with one root and one canal. Mandibular anterior teeth have a more complex anatomy and the presence of two canals is common.1–5 Mandibular permanent canines typically have a single root with one root canal.4,5 Many studies on mandibular canines from different populations reported the presence of up to two roots and two canals with Vertucci’s types I–IV canal configurations.6–12 Two-rooted mandibular canines have reached 5%5,7, while single-rooted canines with two root canals were reported to be approximately 15%.1,4,13

In a Saudi Arabian population, only one recent in vivo cone-beam computed tomography (CBCT) study evaluated the anatomy of permanent mandibular canines.14 In this study, the authors evaluated 454 mandibular canine teeth and found that a single-rooted canine with Vertucci’s type I classification was the most prevalent type (95.4%). Two-rooted mandibular canines comprised 0.2% and two canals were present in 4.6% of the cases. The remaining studies conducted with the same population were case reports of anatomical variations.15–18

An extensive literature search revealed no studies that reported anatomy of permanent maxillary canines and only one study evaluated permanent mandibular canines in a Saudi Arabian population. Therefore, the present study evaluates (a) the prevalence of a second root and canal in mandibular and maxillary canines, (b) gender differences, and (c) bilateral symmetry of canines morphology in a Saudi Arabian population using in vivo CBCT.

CBCT images were retrieved from the database of College of Dentistry, Jazan University, Jazan, Saudi Arabia from 2016 to 2018, following receipt of the Institute’s ethical research approval. This study included mandibular and maxillary permanent canines with fully developed roots and closed apices. This study excluded root canal-treated, calcification, resorption, or distorted CBCT images. The CBCT machine used in this in vivo retrospective study was a 3D Accuitomo 170 (MORITA, Japan) with the scanning parameters: FOV 170–120 mm, 90 kV, 5–8 mA, 17.5 seconds exposure time, and 0.250 mm voxel size. All CBCT images were processed and reconstructed using Morita’s i-Dixel 3D imaging software, and acquired serial axial, coronal, and sagittal sections to evaluate external and internal morphology of maxillary molars. The same endodontist assessed the CBCT images twice, with a 5-week interval in between each assessment, and evaluated the following parameters:

The researcher entered the collected data into the Statistical Package of Social Sciences software program for Windows (SPSS V25; IBM, Chicago, IL), followed by coding and analysis. The results report frequencies and percentages with a 95% confidence interval (CI). The Z test determined whether differences existed in the independent groups. A Chi-square test assessed differences between males and females as well as left and right locations, and Cohen’s Kappa test determined the presence of bilateral symmetry and assessed intrarater reliability. The level of significance for all statistical tests was set at p < 0.05.

For reliability, one observer (the author) evaluated 30% of the total sample twice with an interval period of 5 weeks in between each evaluation. Results of Cohen’s Kappa test revealed an almost perfect agreement between observations with a value of 85.8% and asymptotic standard error of ±9.8%. 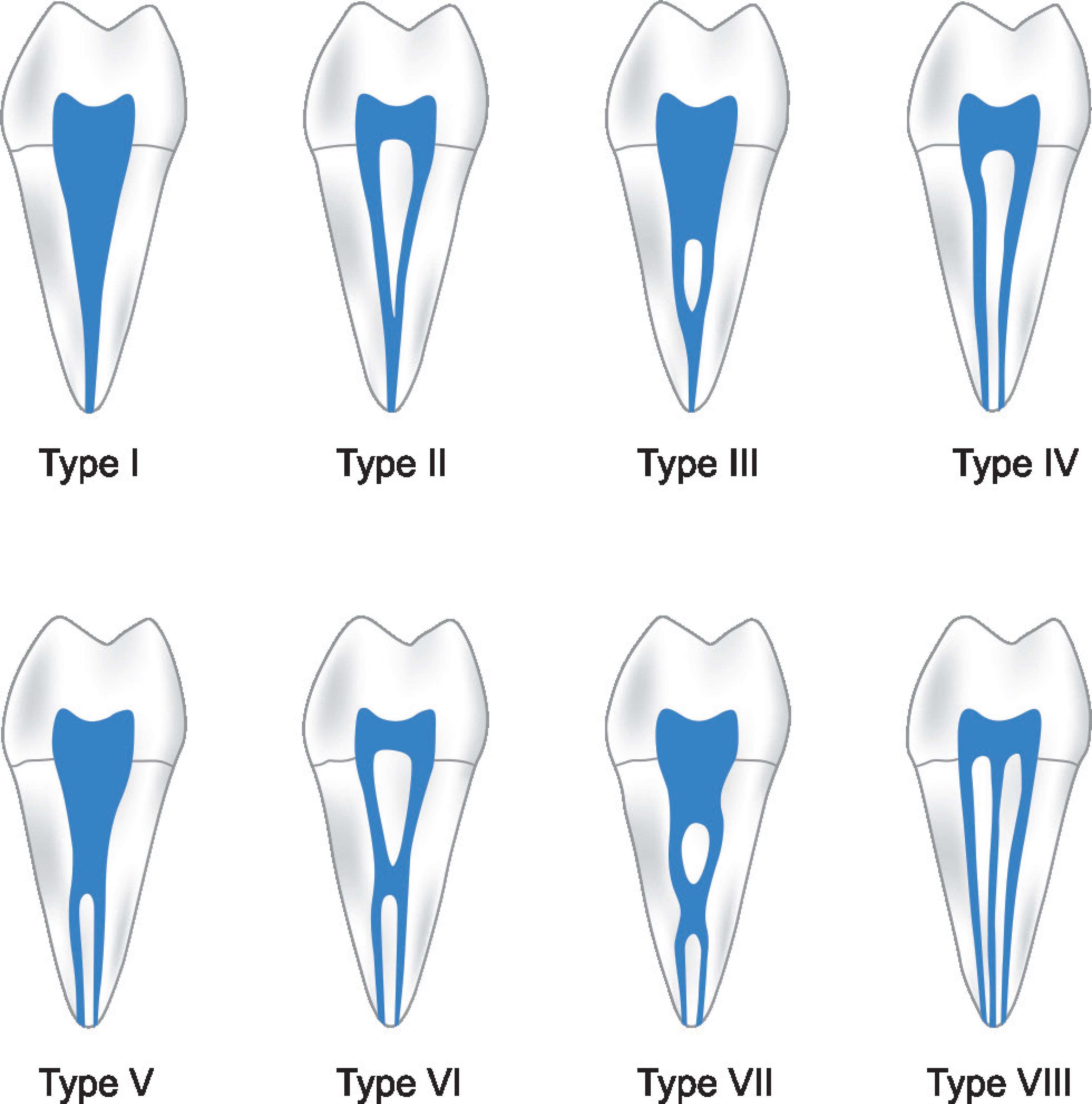 Prevalence of Second Root and Canal 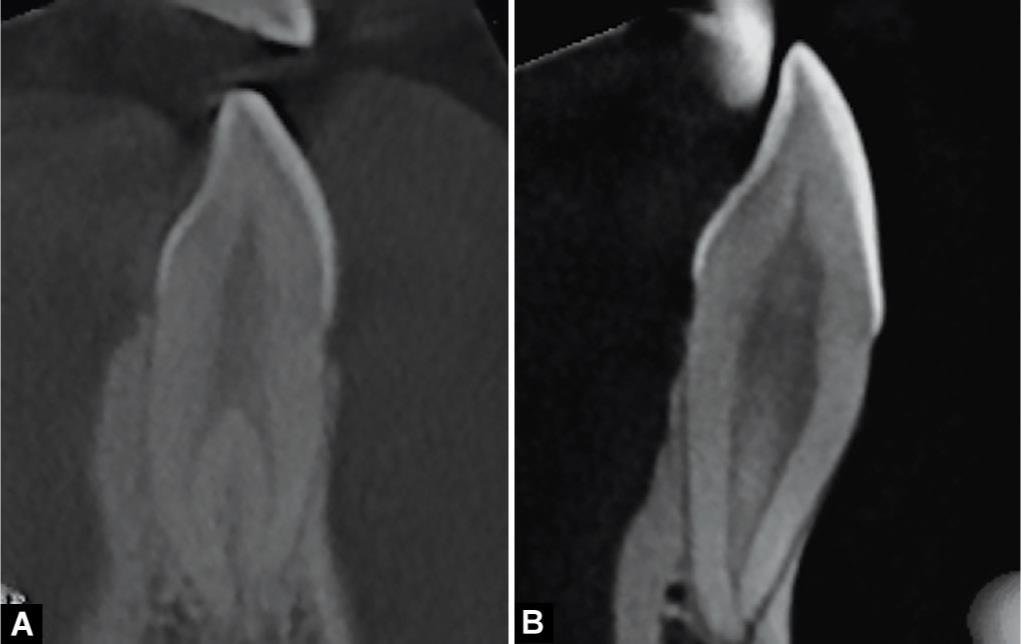 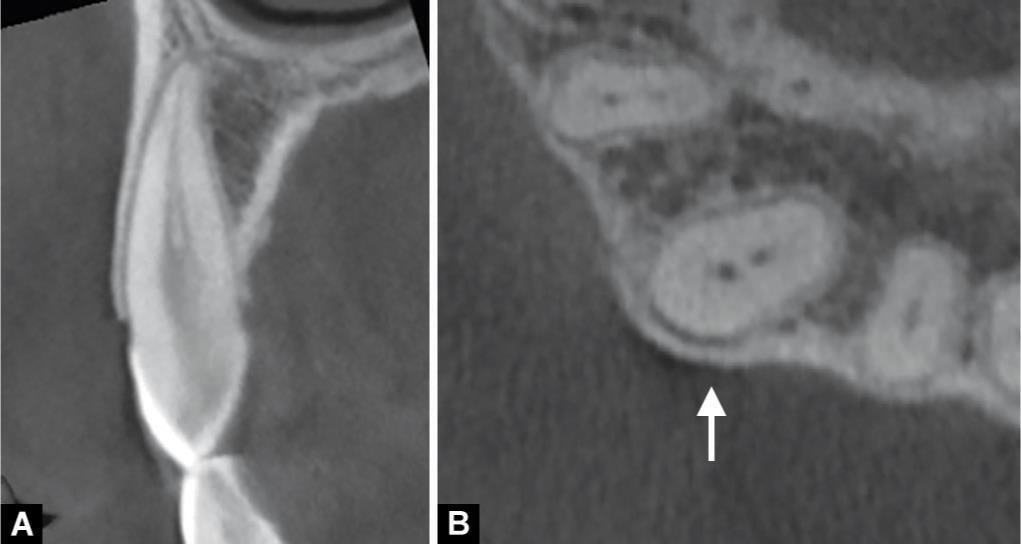 Bold values refer to the symmetry between the variables

Researchers have investigated root canal anatomy using different in vitro and in vivo techniques and, recently, the use of in vivo CBCT has become paramount to obtaining proper details of the root canal morphology during the dental visit.21,22 CBCT is a 3D technology with low radiation dose,22 which allows for the examination of a relatively large sample size safely and noninvasively to achieve a reliable prevalence.3,23

The present in vivo CBCT study investigated the prevalence of a second root and canal of mandibular and maxillary canines. The prevalence of two roots and two canals in mandibular canines was 2.7% and 9.3%, respectively. In teeth with two canals, internal configurations were Vertucci’s type III in 6.1% and type V in 3.2%. Our results revealed a higher prevalence than a finding in a recently published study in a Saudi subpopulation,14 where they reported 0.2% and 4.6% for roots and canals, respectively. The authors of that study found Vertucci’s canal configuration types I–IV in teeth with two canals. In the same study, Aldahman et al.14 evaluated 454 mandibular canines using in vivo CBCT in a central region of Saudi Arabia (Riyadh city). The differences and inconsistencies of their results and ours might be explained by the regional differences where the study samples were obtained, since our sample came from the southern region of Saudi Arabia (Jazan city). Additionally, the small sample size in both studies might be another reason for the differences, suggesting the need for a larger sample size from different regions of the country to extract outcomes that are more reliable.

In maxillary canines from the present study, there were no two-rooted teeth and only 1% two canals were present. Vertucci’s canal configuration type III appeared in teeth with two canals. Our results are consistent with those of an in vivo CBCT study from a Portuguese population in which all teeth showed only one root and two canals present in only 1.4% of 962 maxillary teeth with Vertucci’s type II, III, or IV in canines with two canals. A 2019 in vivo CBCT study in Malaysian population reported only one root and one Vertucci’s type I canal classification in 404 maxillary canines.20 Our study is the first in a Saudi population that evaluated maxillary canines and it seems that the presence of two roots or canals is rare in this population as well.

Pan et al.20 reported results similar to ours, noting no differences between genders in regard to the number of roots and canals. Soleymani et al.12 studied an Iranian population that showed that males have a higher prevalence of two roots and double canals in mandibular canines; in contrast, a study of a Portuguese population by Martins et al.32 revealed that women had significantly more roots and root canals than men.

In maxillary canines, our result is consistent with other studies from different populations20,32 in that studies showed no differences between males and females in regard to the number of roots and canals.

Maxillary canines showed higher similarities in the left and right sides, with 100% for the number of roots, 98.9% for the number of canals, and 98.9% for canal configurations. There were no studies to compare bilateral symmetry of maxillary canines; however, it was not of clinical significance. In contrast, the asymmetry in the number of canals (8.9%) and canal configurations (9.9%) of mandibular canines could be of clinical significance when a practitioner treats opposing canines in the same patient. The researchers of a 2019 systematic review of 102,610 teeth using in vivo CBCT from 28 countries concluded that some groups of teeth had a similar morphology among different populations, such as maxillary anterior teeth, while other groups of teeth showed a range of diversity.33 Therefore, the results of this anatomical study on mandibular and maxillary canines were within the global range and did not show notable diversity.