Materials and methods: A research survey was conducted at Jacksonville University School of Orthodontics. Thirty-one residents and faculty were the participants. The survey sample was collected from the university patients’ pool. A survey was given to participants at two time points. At the first time point (T1), the participants were given full records without lateral cephalogram. At the second time point (T2), they were given full records with lateral cephalogram. Two measures were analyzed: (1) a change in orthodontic treatment decision and (2) a change in the orthodontic treatment plan. A traditional McNemar’s test was used on paired binary data. We used the conditional logistic regression model with robust variance at a participant level to adjust for a participant-level clustering effect to test the difference in treatment decision before and after. A statistical significance was determined at p = 0.05.

Results: It was found that 93.6% of the treatment decisions and 70% of the extraction decisions were consistent after the introduction of lateral cephalograms. There was no statistically significant association observed between two outcome measures and the use of cephalograms (p = 0.80).

Conclusion: Sufficient evidence does not exist to warrant lateral cephalometric radiographs be taken as a part of standard diagnostic records on every individual seeking orthodontic treatment.

Clinical significance: Evidenced-based selection criteria for prescribing lateral cephalometric radiographs should be developed to reduce the amount of radiation exposure to the general public.

The lateral cephalometric radiograph is a standard component of clinical records taken for orthodontic diagnosis and treatment planning.1,2 Radiographic cephalometry was contemporaneously introduced in 1934 by Hofrath in Germany and by Holly Broadbent in the United States.3 Although its original intent was to longitudinally assess growth and development in the craniofacial complex, the cephalometric radiograph was adopted by clinical orthodontists to diagnose any skeletal imbalances underlying the dental features of a malocclusion. Cephalometric analyses were developed to characterize a patient’s dental and skeletal relationships relative to population norms. The normative data on growth were derived from several longitudinal studies undertaken between the 1940s and 1960s.4,5 Cephalometric radiographs also evaluate the relative position of the teeth as a result of orthodontic movement and the overall effects of the growth of the craniofacial complex. Although not recommended as a screening tool, cephalometric radiographs have on occasion revealed anomalies or degenerative changes in the cervical vertebrae as well as pathologic conditions within the cranium.1

The late 1990s saw a shift of treatment goals from Angle’s ideal occlusion to the soft-tissue paradigm. A higher priority was placed on achieving a harmonious balance of the oral and facial soft tissues, while less emphasis was placed on skeletal and dental relationships or for that matter the long-term stability of the orthodontic result. Thus, with a change in the treatment objective, the diagnostic emphasis has transitioned from dental casts and cephalometrics to intra- and extraoral clinical examination and digital photography.1 No normative data have been generally agreed on, unlike cephalometric numbers. It is irrefutable that the introduction of cephalometry had a significant effect on our understanding of growth and development and our ability to appraise the results of treatment. However, the need for cephalometric analysis seems to differ substantially among orthodontists.6

Patient protection and safety should always be a priority, and the risk of cancer associated with frequent high-dose radiation cannot be overlooked. While doses and risks for dental radiology are small, a number of epidemiological studies have provided evidence of an increased risk of brain,7,8 salivary gland,8,9 and thyroid tumors.10,11 The effects described above are believed to “have no threshold radiation dose below which they will not occur.”12 The “as low as reasonably achievable” (ALARA) principle should be strictly respected and shadowed to lessen patients’ exposure to harmful radiation. So, orthodontists should weigh the benefits of cephalometric radiographs against the sequelae of increasing a patient’s exposure to radiation, the effects of which pile up from multiple sources over time. The objective of this paper is to assess cephalometric radiography and analysis utility in modern orthodontic diagnosis and treatment planning. The null hypothesis considered was that there is no change in the orthodontic diagnosis and treatment planning with or without the use of lateral cephalograms.

The present observational study was conducted to measure the consistency of treatment plan decisions with and without a cephalometric X-ray. Ethical clearance was obtained from the Institutional Review Board of the Jacksonville University School of Orthodontics (2012–62). The clinical cases were collected from Jacksonville University patients’ pool. The complexity of the cases was determined by an experienced faculty and judged as borderline (extraction/non-extraction) with a variety of malocclusions. The full records included (1) intra-/extraoral photographs; (2) digital models (Orthocad); (3) age of the patient; and (4) cephalometric radiograph and tracings. Exclusion criteria for the selected cases were any syndromes, trauma history, and pathosis. A total of 14 cases were included in the study. Thirty-one orthodontic residents and experienced orthodontics faculty at Jacksonville University Florida were recruited for the study.

The study design was clustered paired data, with each case having a decision before and after receiving lateral cephalograms, and multiple cases (12–14) were nested within each participant. The paired cases on treatment decision before and after was cross tabbed and calculated to get the concordant rate and the discordant rate. To test the difference before and after, though the traditional McNemar’s test was used on paired binary data but did not account for the clustering effect. A conditional logistic regression model with robust variance at the participant level to adjust for the participant-level clustering effect was used to test the difference in treatment decision before and after. Analyses were conducted using SAS version 9.4 (SAS Institute Inc, Cary, NC) and Stata version 14 (StataCorp LP, College Station, TX).

Considering the individual cases, 3 of the 14 patient cases were responsible for 75% of the changed decisions; for the other 11 cases, there was a minimal change in the treatment decision regardless of the cephalograms. These results were not found to be linked to any orthodontists. Considering the individual subjects from our sample, it was revealed that some of them consistently recommend extractions, and some of them consistently do not recommend extractions regardless of X-rays, and the rest vary their recommendations. The study design allowed for a “washout” period of 2 months between time points to eliminate memory bias. 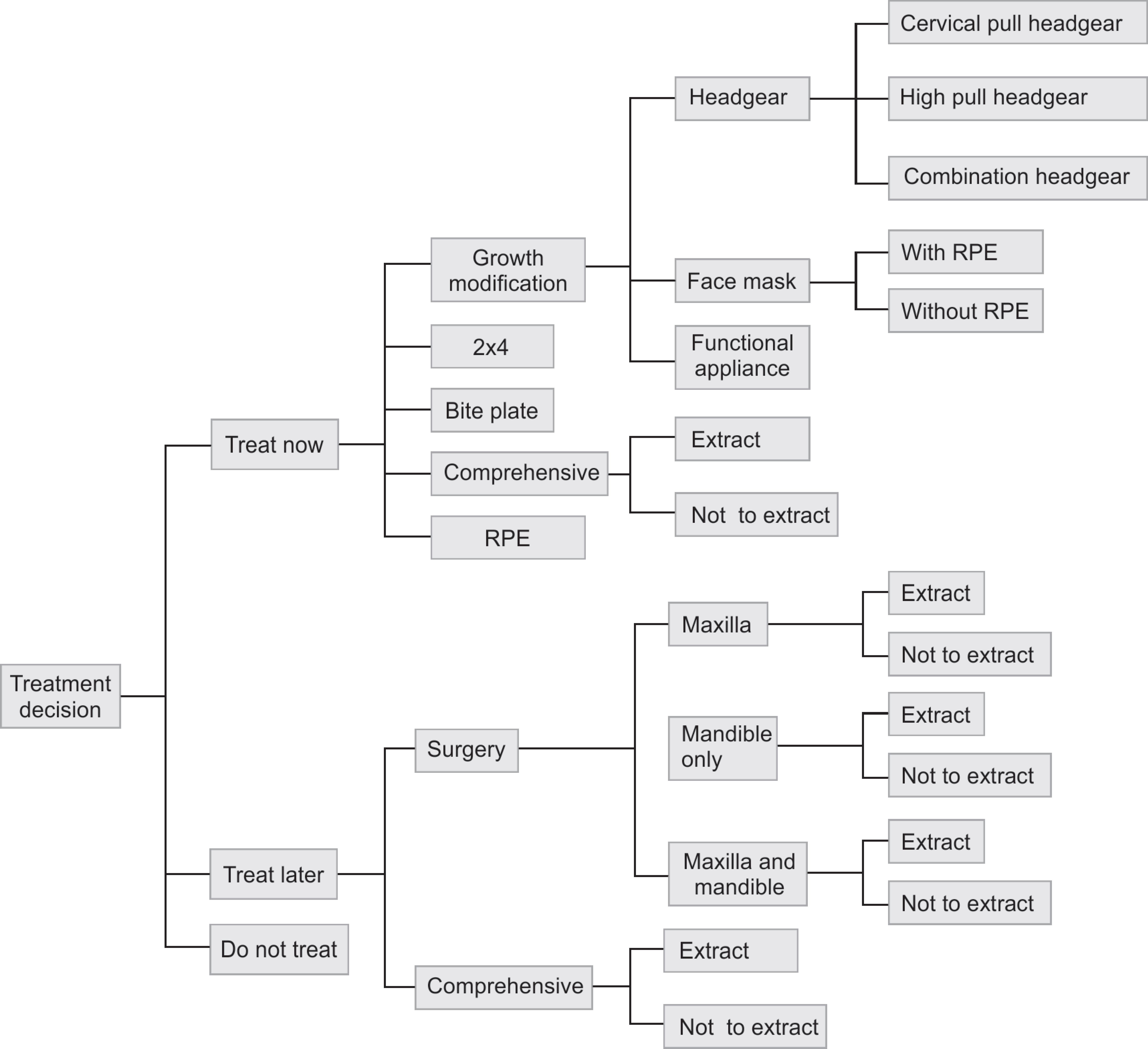 According to Han and Vig, the information gathered “from diagnostic procedures will yield degrees of diagnostic value.”13 Atchison et al. noted that “the primary purpose of the radiographic examination is to provide additional information that may not be evident clinically.”17,21 The clinician must consider the biologic implications of ionizing radiation and whether the prescribed radiographs will contain vital information that cannot be obtained by other means such as medical and dental history, clinical examination, study casts, or photographs.14 The relative contribution of cephalometric radiography from a risk–benefit perspective has not been validated from an evidence-based perspective.15

The most recent clinical guidelines practice from the American Association of Orthodontists recommend that a lateral cephalometric radiograph be taken as a part of diagnostic records for the “evaluation of the size, shape, and positions of the craniofacial structures and dentition, and to aid in the identification of skeletal anomalies or pathology.”22 A survey regarding diagnosis and treatment planning revealed that 90% of the orthodontists in the United States routinely take pretreatment cephalometric radiographs.23

There is no doubt that the lateral cephalometric radiograph still has a place within the battery of orthodontic diagnostic tests. Cephalometrics proves very useful in determining the “offending jaw” in the case of a skeletal malocclusion, helps determine the angulation and anteroposterior position of the anterior teeth relative to the basal bone reveals the mandibular plane angle, and can be used for the cervical vertebral assessment (CVA) to assess skeletal maturation.5

However, the question remains whether lateral cephalometric radiographs should be ordered routinely on all patients seeking orthodontic care. Based on our study and older studies, one can certainly question the diagnostic value of obtaining these radiographs on individuals presenting with a class I malocclusion and a well-balanced soft-tissue profile. It is clear that selection criteria for prescribing lateral cephalometric radiographs should be developed to reduce the amount of radiation exposure to the general public.

Radiation concerns typically relate to the elevated risk of developing cancer, which has been documented throughout the last century. Radiation therapy was used in the past to treat ankylosing spondylitis, a form of arthritis, and various other conditions. It was found these individuals had an increased incidence of leukemia, breast cancer, and thyroid cancer.24

As it is anticipated, each radiographic image has its sources of drawbacks like magnification distortion or positioning errors, which may increase the amount of ionization.25–27 Making matters more difficult is the fact that radiation dosimetry can be challenging to quantify. While surface exposure can be measured relatively easily, this measurement alone does not consider the size of the radiation beam or the radiosensitivity of the tissues exposed. Cells that are rapidly dividing or are primitive or nonspecified are more prone to radiation damage to DNA and aberrant mitotic division. Hence, children are considered more sensitive to radiation than adults, an important consideration since the majority of individuals seeking orthodontic care are growing children.8

Some envision the day when imaging technology for orthodontic diagnosis and treatment planning becomes so advanced that radiation level concerns will become a nonissue.28 However, until that day arrives, many would argue that the profession has an ethical obligation to protect the current generation of patients from extraneous radiation exposure, honoring the ALARA principle. The guidelines in the United Kingdom for clinical orthodontics limit the use of a lateral cephalometric radiograph to29 (1) a skeletal discrepancy when labiolingual movement of incisors is planned; (2) patients with moderate skeletal discrepancies in a teaching environment; (3) the location and assessment of unerupted, malformed, or ectopic teeth; (4) limited serial radiographs for assessing growth and planning joint orthodontic–orthognathic surgery patients.

A limitation of the present study was that the orthodontists could not examine the patients themselves and had to rely on records for their decisions. This may have led to some assumptive variations in the diagnosis and treatment planning.

Within the limitations, it can be concluded that for most treatment-planning decisions in these 14 patients, the availability of a lateral cephalometric radiograph and its tracing did not make a significant difference. Finally, this study supports previous literature that sufficient evidence does not exist to warrant pretreatment lateral cephalometric radiographs be taken as a part of standard diagnostic records on every individual seeking orthodontic treatment.

There is a paucity of sufficient evidence about the benefits of cephalometric radiography in orthodontic treatment planning regarding treatment time reduction, quality performance, or prediction of results. Hence, cephalograms should be used cautiously and as a supplementary rather than a routine diagnostic tool.