Aim: To study the cellular cannibalism (CC) in the tumor cells of ameloblastoma.

Materials and methods: Hematoxylin and eosin (HE)-stained sections of ameloblastoma cases (50) were retrieved from the archived specimens and screened for cellular cannibalism (CC) by stellate reticulum-like cells. Further characterization of CC was performed using CD68 and lysozyme antibodies.

Conclusion: CC is a new addition to the pathogenesis of ameloblastoma.

Cellular cannibalism is highly unique phenomenon characterized by a large cell enclosing a slightly smaller cell within its cytoplasm.1 Recently, we reported CC in oral squamous cell carcinoma (OSCC) tumor cells, which can be easily identified on HE-stained sections.2,3 Moreover, increased CC was reported in higher TNM stages and histopathological grades of OSCC.3 It is believed that selected malignant cells become extremely virulent and engulf their siblings to survive under adverse conditions such as low oxygen level or nutrition depletion.4,5

There are various markers implicated in the pathophysiology of cannibalism. However, the most pronounced are CD68 and lysozyme. CD68 is a transmembrane glycoprotein from the scavenger receptor family and is expressed on monocytes and tissue macrophages. It also possesses lysosome-associated membrane protein-like domain.7 Lysozyme is an enzyme with a single-chain polypeptide of 129 amino acids and is mainly responsible for the digestion or degradation of the engulfed material.8 These two markers were expressed in the cannibalistic tumor cells.4,5

With this view in mind, HE-stained sections of ameloblastoma were screened for CC by stellate reticulum-like cells and further characterized using CD68 and lysozyme antibodies.

The Institute’s Scientific and Ethics Committee approved the study. Samples were selected based on the convenient sampling method. A total of 50 paraffin-embedded specimens of ameloblastoma were retrieved from the archives. Distribution of the cases based on the histopathological variants is mentioned in the Result section. From formalin-fixed tissues, two sections were obtained. These sections were then stained with routine HE stain and immunohistochemistry for analysis of cannibalism.

Cannibalism is appreciated only at a high-power magnification and, hence, sections were not screened at scanner view. Sections were screened with a 40× objective under a compound microscope at three different fields, which displayed maximum density of the CC. Two experienced oral pathologists participated in the identification of cannibalism. In case of disagreement, the third investigator was consulted. By observing three different fields, mean CC per high-power field (HPF) was calculated. After careful evaluation overlapping, dyskeratotic cells, koiocytic cells, and degenerating cells were excluded from the evaluation.

A 3 mm section from the paraffin-embedded tissue was subjected to the immunohistochemistry staining using the streptavidin–biotin–peroxidase complex method. The primary antibody used was CD68 (macrophage associated monoclonal antibody, KP-1 clone, 1:50; BioGenex, Fremont, California, USA) and lysozyme (rabbit polyclonal antibody, BioGenex). CD68 was incubated at the room temperature for 1 hour and the lysozyme was incubated at the room temperature for 30 minutes. Pretreatment for CD68 includes treatment with citric acid in three cycles for 5 minutes. No pretreatment was done for lysozyme antibody staining. Diaminobenzidine was used as a chromogen for visualization. The normal lymph node tissue was used as a positive control for both the markers.

Histopathological evidence of CC was observed in 15 (30%) cases [follicular 10 (66.66%), unicystic 3 (20%), and acanthomatous 2 (13.33%)] (Fig. 1). In acanthomatous ameloblastoma, the CC was observed in the central metaplastic squamous cells (Fig. 2), while in 3 cases of unicystic ameloblastoma, CC was seen in stellate reticulum-like cells of intraluminal (2) and mural proliferations (1). The CC ranged from 1 to 2 with a mean of 1.46 ± 0.51 per HPF. The histomorphological features of CC were similar to that of other malignancies. Both partial (Figs 1A and C) and complete CC (Figs 1B and D) were observed with internalized cells surrounded by a clear halo. The nuclei of the cannibalistic cells displayed a small concavity or crescent-shaped morphology due to the pressure effect from the internalized cells (Figs 1 and 2). The completely engulfed internalized cells were seen in various stages of degeneration. All the cases, which showed histopathological evidence of cannibalism, were subjected to immunohistochemistry. All the 15 cases of ameloblastoma showed a negative expression of CD68 as well as lysozyme.

Although CC is exclusively seen in malignant neoplasms, in our previous paper, we have reported this phenomenon in aggressive benign pathologies like central and peripheral giant cell granulomas and giant cell tumor of long bones.10,11 As giant cells in giant cell granuloma are derived from monocyte–macrophage lineage, the cannibalistic activities in such cells are attributed to the inherent phagocytic nature of the cells. Hence, scientifically, this cannot be regarded as true cannibalism. However, in the present paper, we reported cannibalistic activity in the stellate reticulum-like cells of ameloblastoma. Central stellate reticulum-like cells gradually undergo lack of nutrition due to the increasing size of the ameloblastic follicle. It is evident from the intrafollicular degeneration, which is the most common phenomenon in ameloblastoma. Since this phenomenon in ameloblastoma could possibly be related to nutrition in the tumor cells, it can be considered as true cannibalism. And this is the first report of true cannibalism in any benign tumor of the human body. 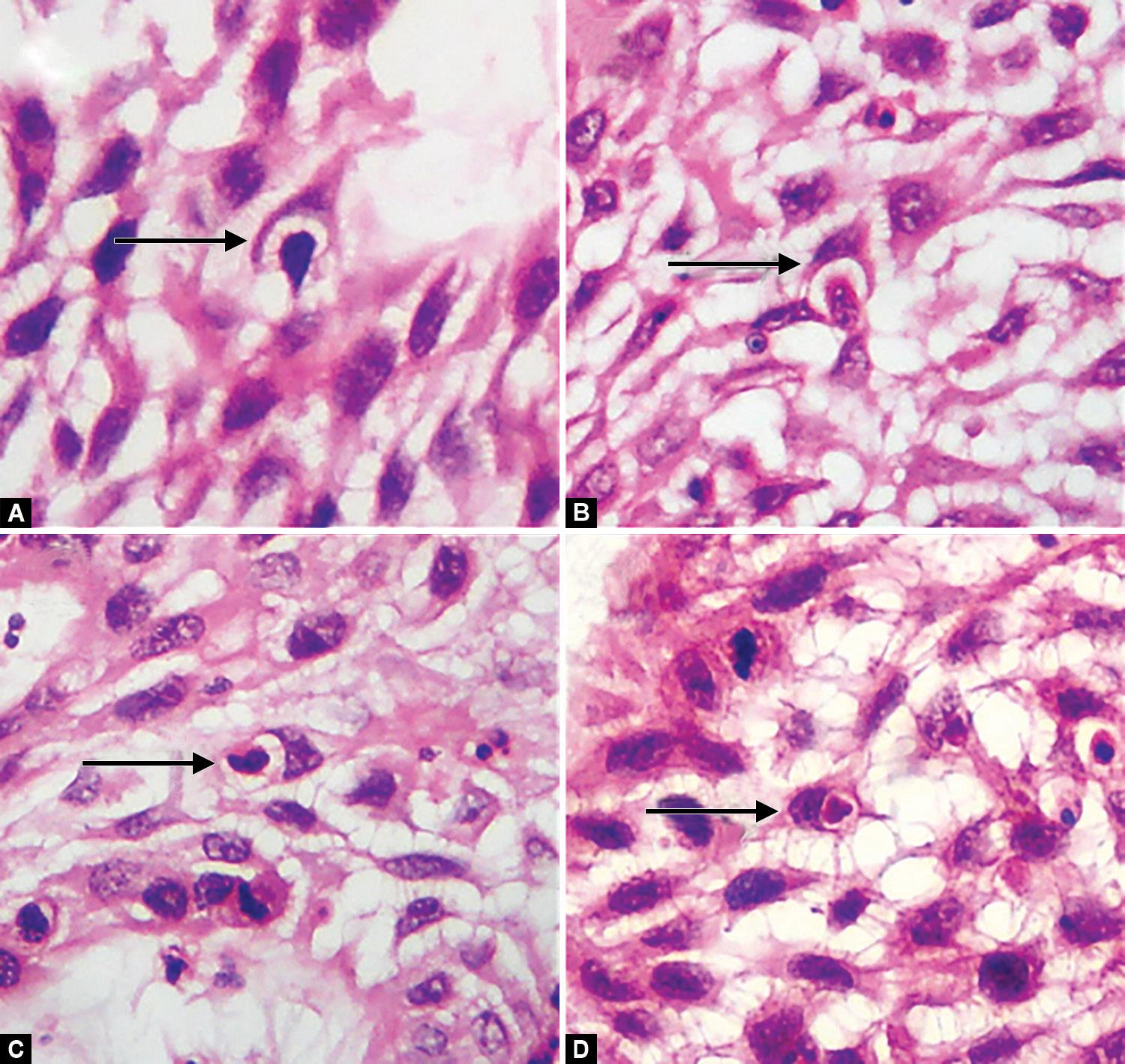 Figs 1A to D: Photomicrograph of follicular ameloblastoma showing partial (A and C) and complete (B and D) CC in stellate reticulum-like cells (black arrows) (HE stain; total magnification ×400)

Genetic markers implicated in CC are CD68, lysozyme, caveolin-1, actin, ezrin, cathepsin-B, nine transmembrane segment, vimentin, and Rho-ROCK-actin/myosin pathway. CD68 and lysozyme markers are implicated in degradation and digestion of the engulfed material. In OSCC, cannibalistic cells show the expression of CD68 and lysozyme.3 Moreover, a positive expression of phagocytic markers was also observed in non-cannibalistic cells of OSCC. This could represent early genotypic expression without phenotypic evidence of CC in tumor cells. In the present study, both CD68 and lysozyme showed negative expression in stellate reticulum-like cells and ameloblasts-like cells. The reason could be attributed to very less number of CC activities (1–2 with a mean of 1.46 ± 0.51 per HPF) in the stellate reticulum-like cells. Probably, cases with increased cannibalistic activity might show detectable levels of CD68 and lysozyme. However, there were no cases with high mean cannibalistic activity per HPF. Hence, it is inappropriate to draw any firm conclusion on these findings due to the limited sample size.

CC has always been considered as a sign of aggressive behavior in many tumors. It correlates with a poor grade of tumor differentiation, lymph-node metastasis, and poor prognosis of the patient.2,3 Even in benign tumors like central giant cell granuloma and peripheral giant cell granuloma, CC was strongly associated with recurrence in the patients.10,11 We believe that in the case of ameloblastoma also, CC can be considered as a marker of aggressive behavior and recurrence. However, it is too premature to comment on this aspect and further studies are needed in this direction to authenticate the aforementioned hypothesis.

In conclusion, this is the first ever evidence of CC in stellate reticulum-like cells of ameloblastoma which has not been explored till date and is a new addition to the pathogenesis of ameloblastoma. We recommend further studies on a larger sample size with detailed clinicopathological correlation. Detailed molecular investigations of this mysterious phenomenon could open new avenues for targeted therapy. However, based on the current findings, it would be premature to comment on its translational aspect in treating ameloblastoma.

The presence of cannibalism in ameloblastoma suggests the aggressive nature of the tumor. This feature can be used for predicting biological behavior and prognosis in ameloblastoma. Molecular markers associated with cannibalism can be a potential therapeutic target for future medicine-based treatment strategies.