Aim: To evaluate and compare in vitro the dentinal crack formation in root canal dentin after root canal instrumentation with hand K-Flex files, ProTaper Next, and self-adjusting engine-driven files.

Materials and methods: Ninety-two human mandibular first molar teeth were randomly divided into four groups (n = 23) as per the instrumentation protocol: group I—unprepared teeth (control); group II—hand K-Flex files (Sybron Endo); group III—ProTaper Next X1 and X2 (Dentsply Maillefer); group IV—self-adjusting file (ReDent Nova, Israel). All the roots were sectioned perpendicular to the long axis of the tooth at 9 mm, 6 mm, and 3 mm from the apex and thereby obtaining sixty-nine samples, which were then subjected to a stereomicroscopic examination for detection of dentinal cracks. Statistical analyses were done using the Chi-square test with SPSS (version 19), and p value was set at p < 0.05.

Results: Statistically significant differences were seen between the instrumented groups. No dentinal cracks were found in the unprepared roots and those prepared with hand K-Flex files (0/23). Self-adjusting-file-instrumented group showed significantly less incidence of crack formation when compared to the ProTaper Next group with p = 0.001.

Conclusion: Self-adjusting file is an efficient engine-driven NiTi instrument for root canal instrumentation with the least occurrence of crack formation in the root canal dentin compared to the ProTaper Next system.

Clinical significance: The introduction of NiTi rotary file systems has metamorphosed the endodontic treatment by their better cutting efficiency and cleaning potentiality. Yet, evidenced-based clinical studies are to be conducted on the incidence of microfractures that can lead to vertical root fractures, which will be produced irrespective of the motion kinematics and design feature and thereby compromising the clinical maintenance of the endodontically treated teeth.

The rotary nickel titanium instruments over the last decade have metamorphosed the design conceptualization and techniques of root canal preparation, which was made possible by the flexibility and enhanced by specific geometric design features.1 The file design is also likely to affect the shaping forces on the root dentin and have been associated to an increased risk of developing cracks.2

The advancement in NiTi instruments have led to the introduction of thermomechanically processed super-elastic NiTi wire termed M-Wire, which rendered the NiTi instruments more flexibility and resistance to cyclic fatigue.3

The ProTaper Next (Dentsply Maillefer) NiTi instruments manufactured recently from the M-Wire technology has a unique off-centered rectangular design. This feature diminished the screw effect, dangerous taper lock, and torque on any given file by minimizing the contact between the file and dentin.4

The recently introduced self-adjusting file (ReDent Nova, Israel) is a hollow file designed as compressible, thin-walled, pointed cylinder composed of a thin NiTi lattice. When inserted into the root canal, it adapts itself to the canal shape both longitudinally and also along the perimeter of the cross section, thereby applying a constant delicate pressure on the root canal walls and thus providing a three-dimensional adaptation during the cleaning and shaping process.5

However, there is no consensus concerning the role of motion kinematics in creating dentinal damage, and limited data are available to compare the dentinal crack formation with these newly introduced NiTi files. Hence the purpose of this in vitro study was to evaluate and compare the dentinal crack formation after instrumentation with Hand K-Flex files, ProTaper Next, and self-adjusting files.

Ninety-two extracted human mandibular first molars were selected, cleaned, and kept in distilled water. The external root surfaces were inspected under a microscope (Carl Zeiss, Germany) to exclude the possibility of any external defects or cracks.

Specimen Preparation and Embedding of the Specimens in Acrylic Resin Blocks

Access cavity preparation was done using an Endo-Access bur and the mesiobuccal and mesiolingual canals were localized. The distal roots with the respective part of the crown were sectioned at the furcation level and discarded. The determination of the working length was performed with a dental operating microscope by inserting a #10 K-Flex file to the root canal terminus and subtracting 1 mm from the measurement.

Instrumentation of the root canal was done for each system according to the manufacturer’s instructions. Canals were lubricated with an EDTA-containing gel and irrigated with 3 mL of 5% NaOCl solution after use of each file. At the end, the canals were rinsed with 1 mL of 17% EDTA solution, followed by a final NaOCl rinse.

Group I: It served as control where no instrumentation was done.

Group II: Instrumentation with hand K-Flex files till an apical size of 25.

Sectioning and Microscopic Examination (Figs 5 and 6)

All roots were then sectioned perpendicular to the long axis at 9, 6, and 3 mm from the apex using a diamond disc with water coolant. Each specimen was examined for the presence of dentinal cracks by two operators who were blinded about the study group. Digital images of each section were captured at 40× magnification using a digital camera (S6200; NIKON CORP, Tokyo, Japan). The results were expressed as number and percentage of cracks in each group. 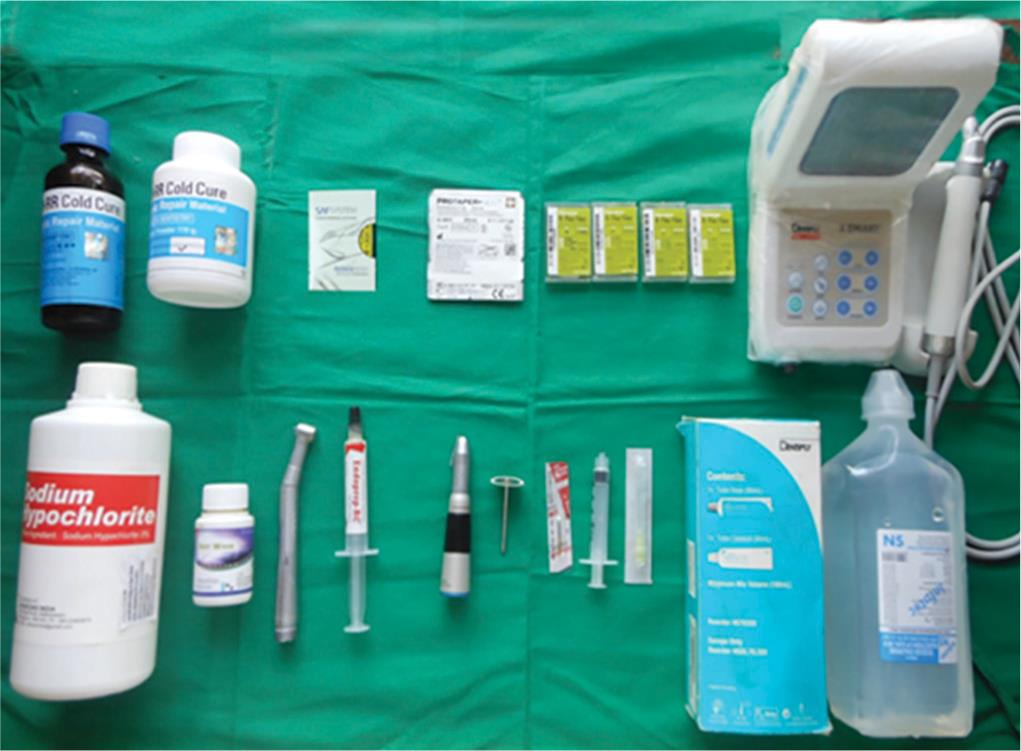 Fig. 1: Materials used in the study 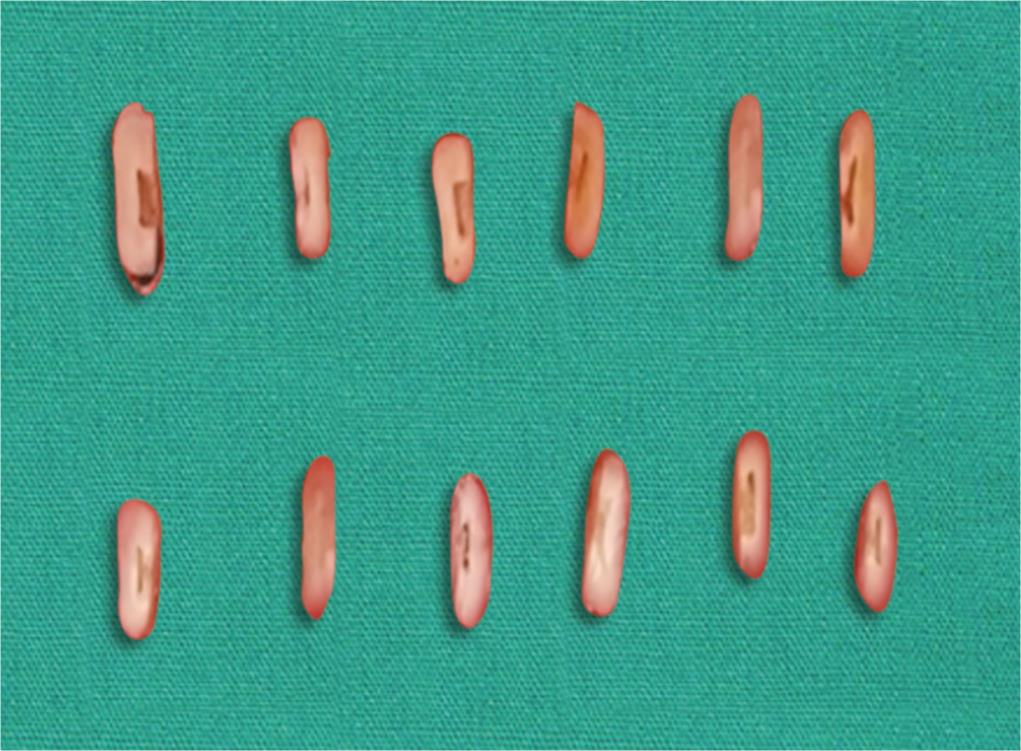 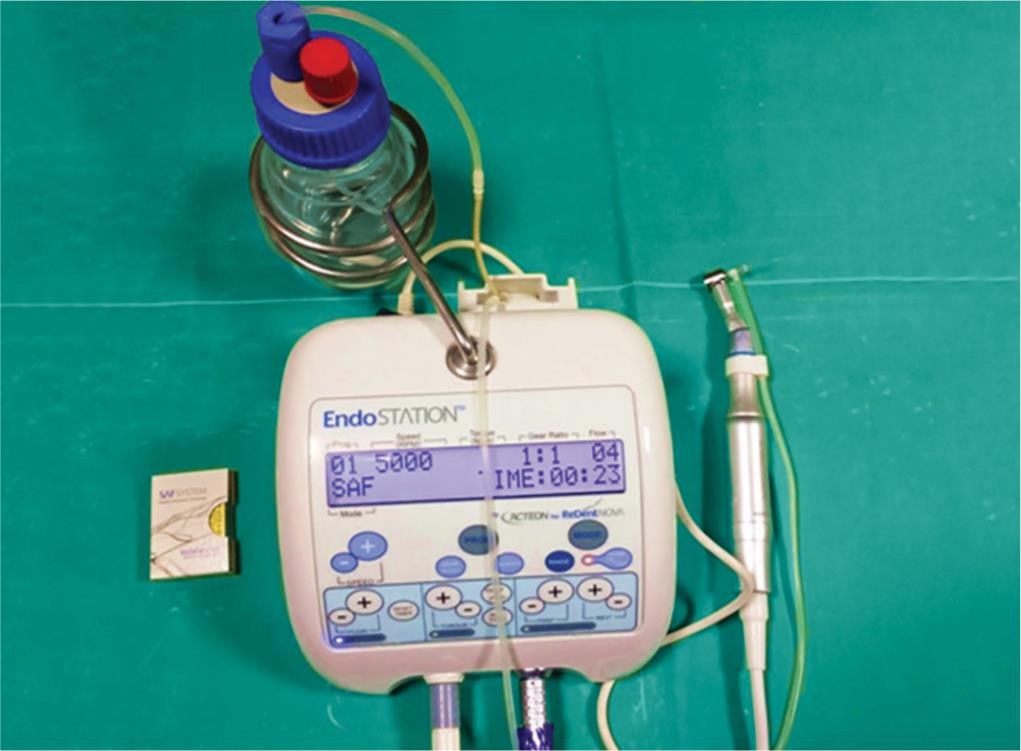 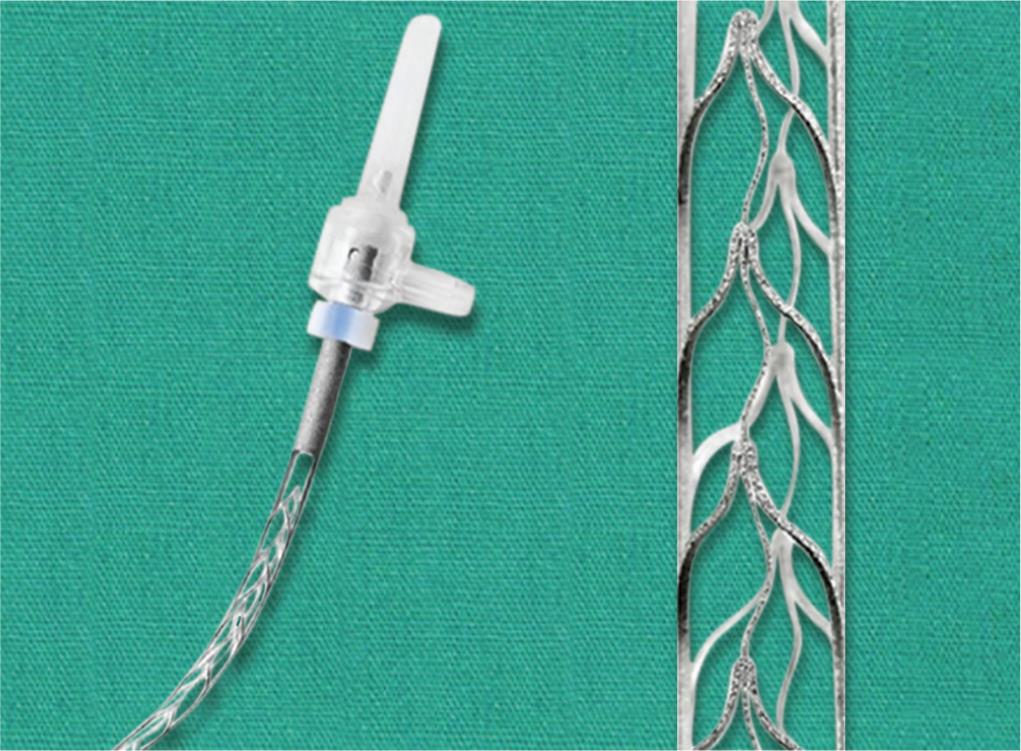 Figs 5A to C: Section with cracks; (A) Coronal third; (B) Middle third; (C) Apical third

Figs 6A to C: Section without cracks; (A) Coronal third; (B) Middle third; (C) Apical third

The data were tabulated and subjected to a statistical analysis using the Chi-square test with SPSS (IBM, USA-Version 19.0). The level of significance was set at p < 0.05.

The group I and group II revealed no cracks in the root canal dentin, and the highest incidence of crack formation was seen in group III (14/69)—3 in apical section, 6 in middle section, and 9 in coronal section, as represented in Figure 7, which was statistically significant when compared to group IV (1/69) with p = 0.001 as shown in Tables 1 and 2.

The biomechanical root canal preparation is one of the most inexorable step in achieving endodontic success. During a root canal preparation, the contacts between the instrument and canal walls can create a transient stress concentration in the dentinal canal wall. The studies have also reported that the zeal of rotary root canal instrumentation results in excessive dentin removal, generating increased stress and friction on root canal walls, which may contribute to the inception of dentinal cracks or craze lines.6–9 The nickel titanium instruments with new design features in relation to tip size, taper, helix angle, cross section, and pitch are continually manufactured in an attempt to overcome the canal preparation errors. The technological advancement in metallurgical sciences has led to the introduction of new alloys with superior mechanical properties.

The present in vitro study compared the incidence of dentinal crack formation in the mesial roots of human mandibular molars at three regions—apical, middle, and coronal—after instrumentation with hand K-Flex files, ProTaper Next, and self-adjusting files, and subjecting these samples to a stereomicroscopic examination.

The samples chosen in this study were examined under a stereomicroscope before the commencement of experimental research to determine the presence of pre-existing cracks, craze lines, or fractures. The periodontal ligament with its viscoelastic property plays a major role in dissipating stress generated by load application during the masticatory process. Therefore, the root surfaces were coated with a layer of polyvinyl siloxane material before placing within the acrylic block to simulate the periodontal ligament, as described by Milani et al.10 The sectioning procedure had no influence on crack formation as exhibited by the control group. This is due to the storage of samples in distilled water to prevent dehydration and the sectioning procedure, which were done under water coolant.11 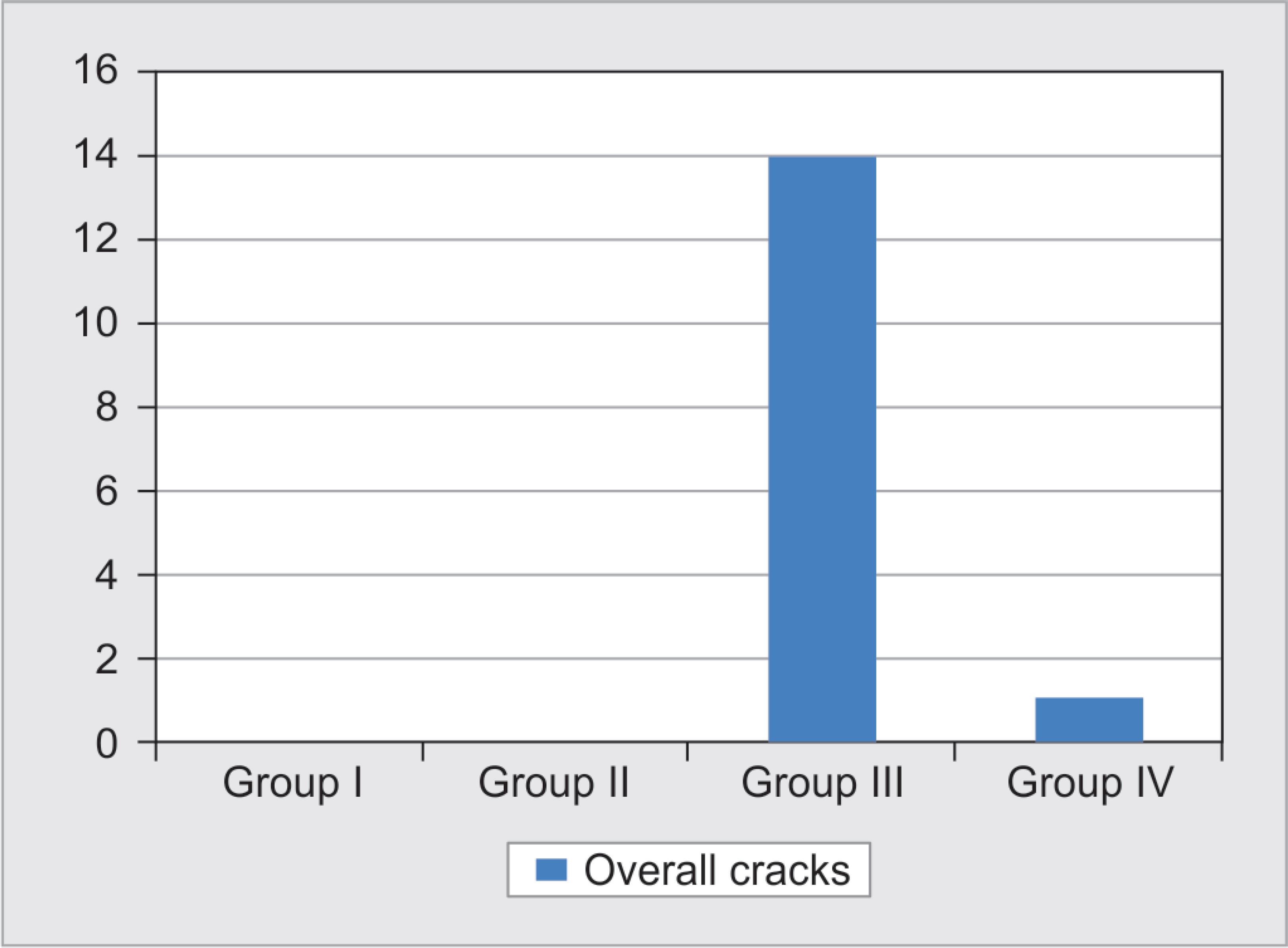 The samples prepared with hand K-Flex files (group II) did not exhibit cracks in the root canal dentinal wall after the stereomicroscopic examination. These findings were in agreement with several other studies and could be attributed to the absence of a belligerent rotary motion and less taper of hand K-Flex files compared with the engine-operated NiTi rotary instruments.12–15

The samples prepared with the ProTaper Next rotary file system (group III) exhibited the highest number of cracks at all levels of the root canal (i.e. apical third, middle third, and coronal third), with the highest being at the middle third (26%) as shown in Figure 7. These results may be attributed to the highest stress concentration at the most curved mid root area and may also be related to the offset rectangular design of the ProTaper Next rotary instrument, creating a swaggering motion. As a result of this design, any given ProTaper Next file can cut a bigger envelope of motion compared to a similarly sized file with a symmetrical mass and axis of rotation, resulting in excessive dentin removal. The observation of the present study is in accordance with Capar et al., who reported the incidence of dentinal crack formation after instrumentation with the ProTaper Next X2 file.14,15

Adorno et al. revealed the incidence of dentinal crack formation after instrumentation with rotary NiTi files, which were due to the excessive dentinal removal and thereby debilitating the roots.16 The present study demonstrated a higher incidence of dentinal crack formation at the mid-root area and can be attributed to the highest stress concentration at the most curved mid-root area.

The rotary NiTi files that are currently utilized are of great assistance when treating straight or round cross-sectioned root canals. However, these instruments are less effective when dealing with flat or oval canals. Flat oval root canals are common in distal roots of lower molars, upper and lower bicuspid, lower incisors, and canines. The buccal and lingual areas of such flat root canals and the area facing the isthmus in tear-shaped ones cannot be adequately prepared by current rotary files. All current rotary files have one or another type of spiral blade and helical formation that machines the root canal into a round cross section. Substantial untouched areas may be left on the buccal and lingual sides of root canals, which may serve as a potential habitat for the bacteria.17

The self-adjusting file system (ReDentNova, Israel)—the newly introduced system—is claiming to close the gap between what we believe we do and what we can actually achieve in long oval or flat canals and their three-dimensional (3D) reality.

The samples instrumented with a self-adjusting file exhibited minimal cracks (1%). This is because the rotational movement was not applied and these files exerted a constant delicate pressure on the root canal dentinal walls, which allows the uniform removal of dentin along the whole perimeter of the root canal. The in and out vibrating movements of the file instead of full rotation have resulted in less stress concentration in the root canal. The efficacy of self-adjusting file in shaping C-shaped canals have demonstrated a significantly better performance than the ProTaper system by adapting itself to the canal shape both longitudinally and along the cross section, ensuring three-dimensional adaptation. Furthermore, the continuous irrigation through the self-adjusting file minimized the friction and facilitated the removal of dentin. These observations are in accordance with those of Yoldas et al., who reported the absence of dentinal cracks in a canal instrumented with the self-adjusting file system.17–19

Unfortunately, the in vitro condition of the study limited the clinical pertinence due to the invariability in study design and evaluation techniques. In the present study, only the roots were prepared instead of the entire tooth, which did not mimic the clinical scenario.

Within the limitations of the study, it can be observed that