Prevalence of Temporomandibular Joint Disorders in Adults in Jeddah, Kingdom of Saudi Arabia: A Cross-sectional Study

Aim: Assess the prevalence of temporomandibular dysfunction (TMD) in adults in Jeddah, Kingdom of Saudi Arabia.

Materials and methods: This was a cross-sectional study of adults aged 18 years and above during their routine visit to primary care dental centers in the city in 2018. Five-hundred participants enrolled in this study. Primary healthcare centers are clustered geographically in five areas of the city (north, south, west, east, and center) by the ministry of health. One-hundred participants were recruited from each area. The TMD/pain screener questionnaire was completed by participants. The first item used a scoring mechanism of 0–2 (a = 0, b = 1, c = 2), and the second and third items were scored 0–1 (a = 0, b = 1). A total score of 3 or more indicates the presence of TMD. t test was used to evaluate gender differences in TMD prevalence with a significance level of p %3C; 0.05.

Results: There were 250 females and 250 males participants. The mean age was 40.6 years (range: 18–89 years; standard deviation: 13.7 years). Answers to the first question showed that 52% of participants had no pain in the temple area, or jaw in the last 30 days, 46% of participants had intermittent pain, and 2% had persistent pain. Twenty-seven percent of participants had pain or stiffness in the jaw upon waking up, whereas 39% of participants had pain while chewing food, 29% experienced pain from opening the mouth or moving the jaw, 34% during jaw habits such as holding the teeth together, clenching, or chewing gum, and 18% during other jaw activities such as talking, kissing, or yawning. A total score of 3 or more was found in 175 participants, indicating a prevalence of 35%. TMD was significantly more prevalent in females (105 participants, 42%) than in males (70 participants, 28%) with p = 0.0008.

Conclusion: The prevalence of TMD in adult population in Jeddah is considered high. It is significantly more prevalent in females than in males.

Clinical significance: TMD prevalence is relatively high in adults of Jeddah, Kingdom of Saudi Arabia. Public health efforts should be directed at increasing TMD awareness in patients and healthcare professionals.

There are multiple other definitions in the literature for TMD, which make interpreting research results complicated. Nevertheless, it is a common disease with high prevalence rates. The need for a standardized assessment tool was first approached by Helkimo, who developed a clinical TMD severity index.2 In 1992, the research diagnostic criteria for temporomandibular disorders index (RDC/TMD) was introduced with a similar goal of unifying research attempts. Recently, a diagnostic criteria for temporomandibular disorders (DC/TMD) tool was recommended to be used instead, in both clinical and research settings.3 The TMD/pain screener instrument is a self-reported questionnaire (Fig. 1). Given its excellent sensitivity, specificity, and cost-effectiveness, it was chosen to screen the studied population for TMD pain.4

TMD signs and symptoms can be confusing for both patients and healthcare providers. Martins et al. reported a lack of knowledge in a sample of professionals in primary healthcare regarding the association of tinnitus and TMD.9 Resche et al. surveyed dentists and specialists about their understanding of TMD evaluation and management.10 They found significant variations in the answers of surveyed practitioners and concluded that TMD diagnosis and treatment was controversial. A similar study was conducted by Lee et al. to evaluate dentists’ knowledge and beliefs about TMD in Korea.11 They also found a high level of controversy in the diagnosis and management of TMD. This was an epidemiological observational cross-sectional study conducted in Jeddah, Kingdom of Saudi Arabia in 2018. The local institution’s ethical board review approval was obtained, and all patients signed an informed consent after reading the details of the study. The sample was obtained from adults aged 18 years and above during their routine visit to primary care dental centers in the city. Five-hundred participants enrolled in this study. The primary healthcare centers are geographically clustered in five areas of the city (north, south, west, east, and center) by the ministry of health. One-hundred participants were recruited from each of these areas. Collected data included demographic information as well. The TMD/pain screener (Fig. 1) was translated to Arabic and patients were asked to fill it out themselves. The first item has scores of 0–2 (a = 0, b = 1, c = 2). Second and third items are scored as (a = 0, b = 1). The sum was computed and values from 0 to 2 indicate the absence of TMD, while a total score of 3 or more indicates the presence of TMD. t test was used to evaluate gender differences in TMD prevalence with a significance level of p < 0.05. 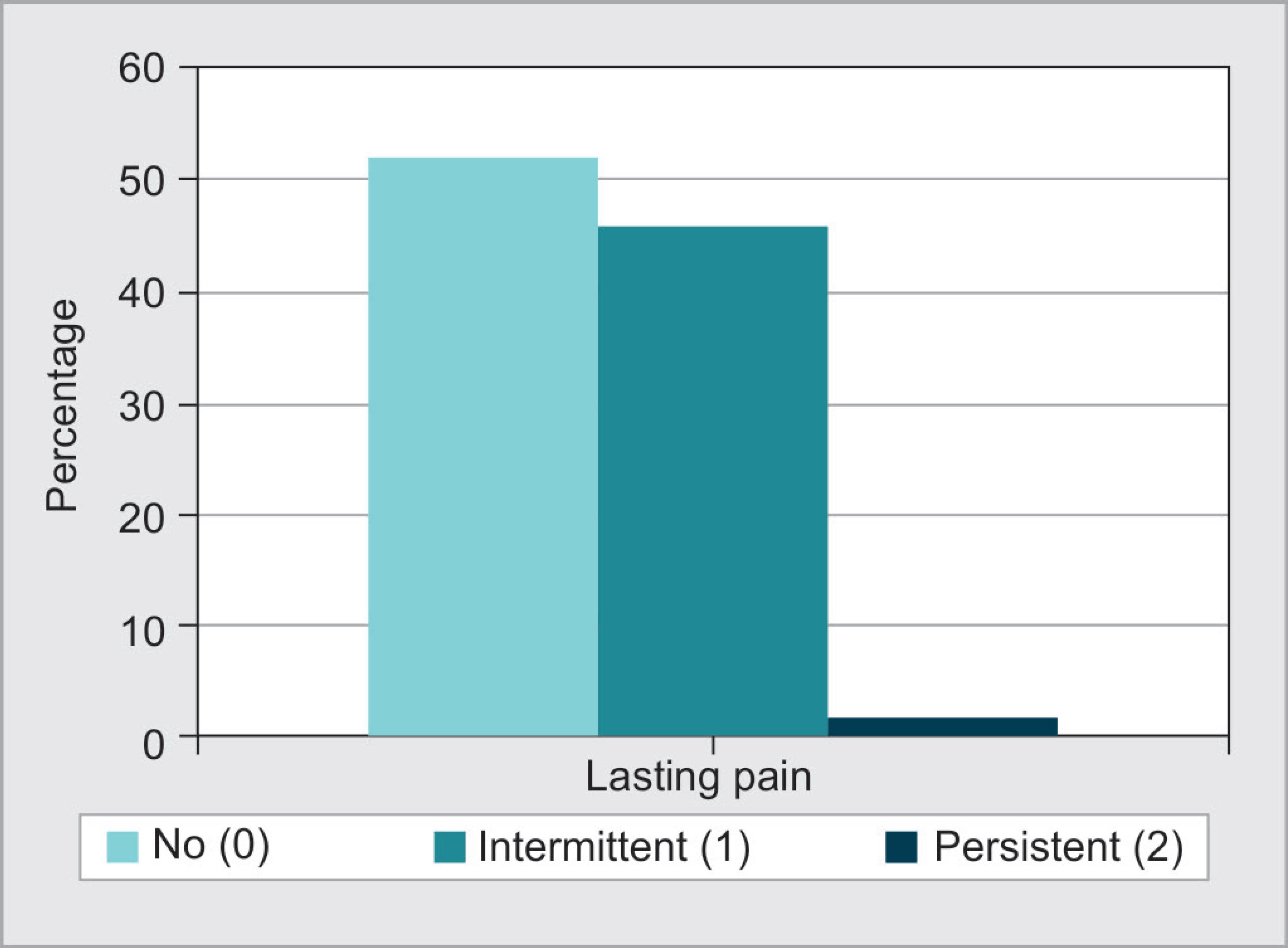 Fig. 2: The chart demonstrates answers to the first question of the TMD pain screener form: in the last 30 days, which of the following best describes pain in your jaw or temple areas in either side?

The prevalence of TMD is variable in the literature. This may be the product of the variability in defining TMD. Moreover, researchers used multiple assessment questionnaires or examination methodology, which makes it harder to compare findings. In this study, we used the TMD/pain screener questionnaire form. It is a validated tool to screen for TMD.4 It consists of three simple questions in a multiple-choice format. This tool showed a sensitivity of 99%, and specificity of 97% for detecting the presence or absence of TMD. It is a simple and cost-effective instrument for screening patients for TMD. It was developed for use in clinical and research settings.

TMD is a multifactorial disease and multiple causes has been implicated in the literature. Occlusal instability has been speculated to play a major role in the development of TMD,16,17 while others found no significant difference in relation to occlusion.18 Parafunctional habits such as bruxism is believed by many to be a major contributing factor in the development of TMD.19 Hormones may play a role in TMD. In contrast to testosterone, estrogen was found to elevate the levels of interleukin 1 and interleukin 6.20 A history of trauma to the lower jaw may be linked to TMD. Additionally, systemic diseases such as rheumatoid arthritis, systemic lupus erythematosus (SLE), and ankylosing spondylitis may contribute to the development of TMD.21–23

To the best of our knowledge, this is the first study to assess TMD prevalence in the adult population of Jeddah, Kingdom of Saudi Arabia. Our sample was obtained from the different geographic areas of the city in order to achieve a representative sample. We found TMD prevalence in 35% of the adult population of Jeddah. This is relatively high, but consistent with some of the previous studies conducted in different population subsets of Kingdom of Saudi Arabia. Zwiri and Al-Omiri reported that 49.7% of students in North Saudi University had at least one sign or symptom of TMD.13 They also reported that it was higher in females, which is in agreement with our findings. Contrary to this study, they used a non-validated questionnaire. Al-Khotani et al. did a cross-sectional study on children and adolescents attending schools in Jeddah, Kingdom of Saudi Arabia.14 They used the TMD/pain screener followed by examination according to the RDC/TMD. They reported that 27.2% were diagnosed with at least one TMD-diagnosis. AlHussaini et al. used an electronic questionnaire to assess prevalence and severity of TMD in female dental students in Riyadh, Kingdom of Saudi Arabia.12 They used Fonseca’s anamnestic index (FAI), and also evaluated the anxiety level using Zung anxiety self-assessment scale (SAS). They reported that high anxiety level was related to TMD and was present in 62.8% of their sample. The higher prevalence rate in their study could be explained by the gender selection in their examined population. Alzarea et al. evaluated 400 edentulous patients during their visit at Al-Jouf dental school in Skaka, Kingdom of Saudi Arabia. They reported that TMD prevalence in this group of patients was 60.5%.15 The occlusal instability may explain the high prevalence rate in their findings. 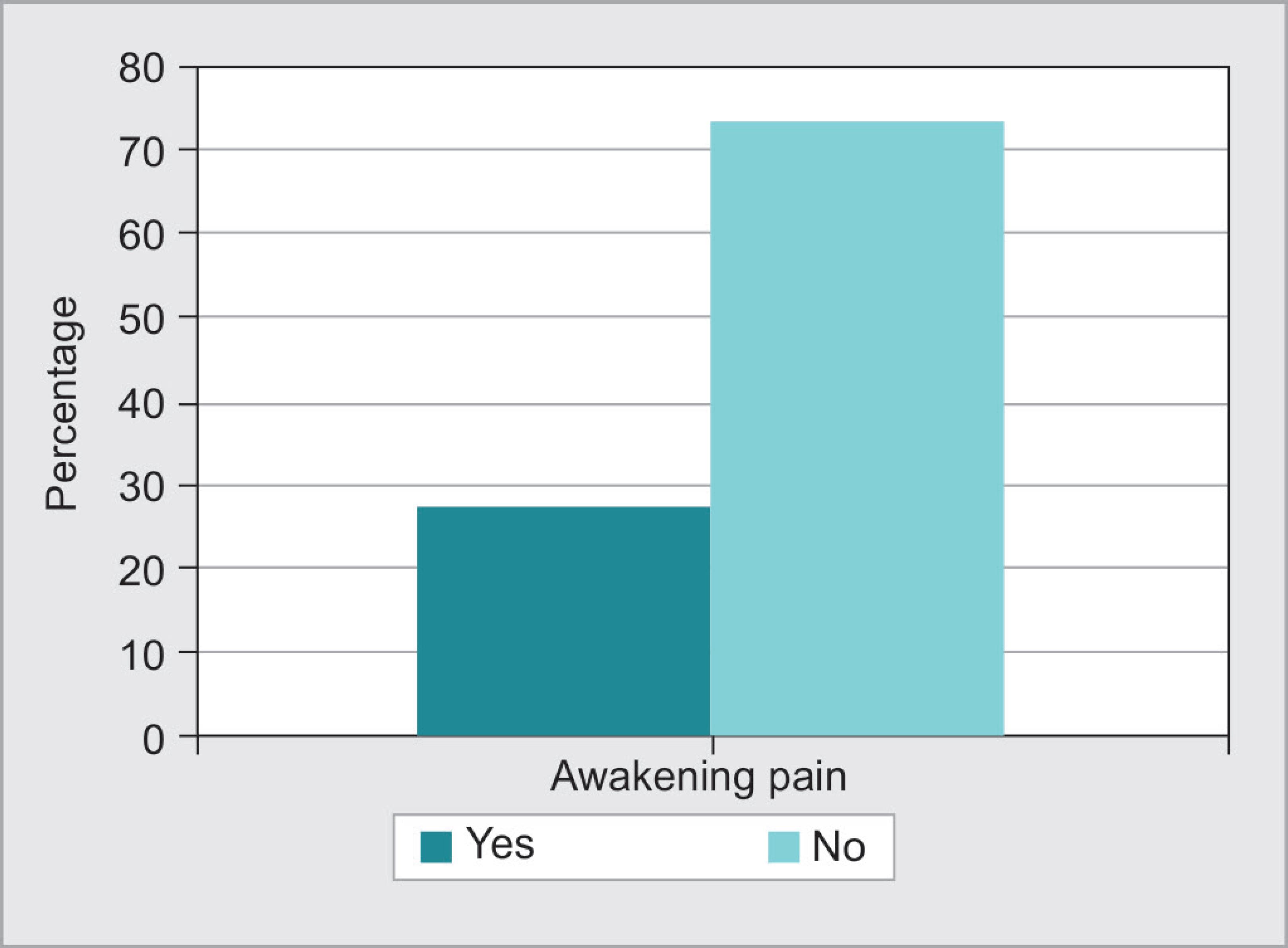 Fig. 3: The chart demonstrates answers to the second question of the TMD pain screener form: in the last 30 days, have you had pain or stiffness in your jaw on awakening? 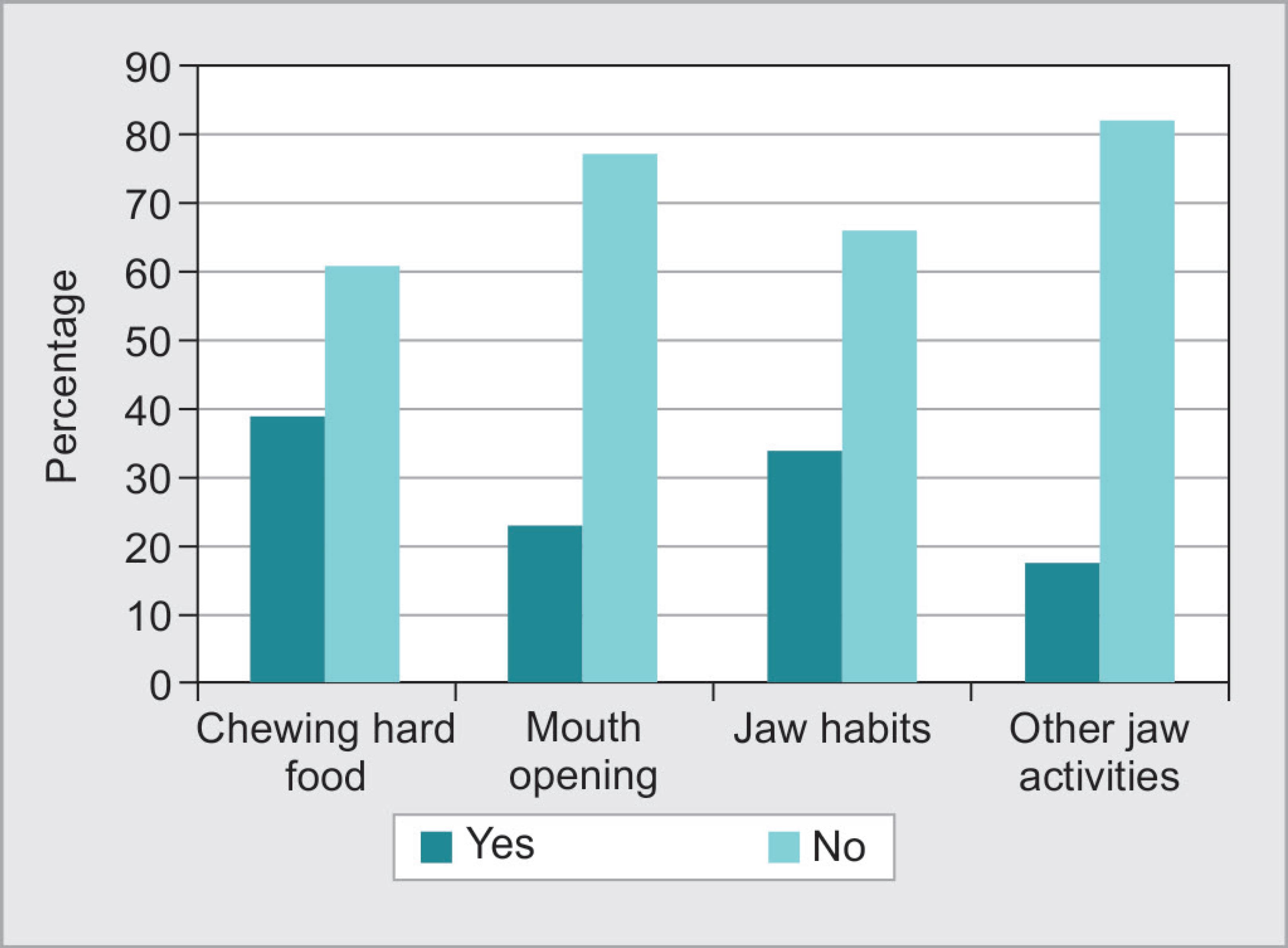 Fig. 4: The chart demonstrates answers to the third question of the TMD pain screener form: in the last 30 days, did the following activities change any pain in your jaw or temple area on either side?

Our results showed that TMD was significantly more prevalent in females (p = 0.0008). This is consistent with many previous studies.24–28 The exact reason for this gender difference remains unknown. A possible etiology includes differences in joint collagen type in the TMJ retro-diskal zone,29 laxity of joint ligaments,30 hormonal factors,31 and higher intra-articular pressure.32 Bueno et al. conducted a systematic review to evaluate the gender difference in TMD prevalence in adults.25 They selected five articles for meta-analysis with a combined total of 2518 patients. They found that females were two times at a greater risk in developing TMD.

The prevalence of TMD in other countries is also variable in the literature. Talaat et al. evaluated the prevalence of TMD incidentally during routine dental examinations using the RDC/TMD.33 They found a prevalence rate of 10.8% mostly affecting women (65.85%). Jessila et al. examined the prevalence of TMD in a Northern Finland birth cohort at the age of 46 years.34 They used a modified DC/TMD protocol and reported that 34.2% of the sample (1962 subjects) had TMD signs. The prevalence was higher in women than in men. These findings are similar to our results. Bengt et al. published the prevalence of TMD in adult patients attending general dental practice in Sweden using a questionnaire and examining mouth opening range.35 They reported a mean prevalence of 5% and mostly in patients aged 30–45 years; however, they used a non-validated assessment method. Loster et al. examined 260 young polish volunteers selected randomly from high schools at the age of 18 years and found that 26.5% of them had one or more diagnoses on the research diagnostic criteria for temporomandibular disorders (RDC/TMD) axis I.36 Iodice et al. used a self-developed questionnaire to study the prevalence of TMD in adult Italian population sample. They found that 30.7% had TMJ clicking, 16.3% had TMD-pain, and 10.3% had TMJ crepitus.37 Glass et al. conducted a telephone survey asking questions about TMD symptoms in Kansas City metropolitan area.38 That study found that the prevalence of jaw soreness, diurnal clenching, nocturnal bruxism, and joint noises ranged from 10–19%.

A limitation of this study include a relatively small sample size; however, the high prevalence rate of TMD in the adult population of Jeddah, Kingdom of Saudi Arabia warrants further public and professional awareness of TMD.

TMD is a multifactorial process with varying prevalence rates in different populations. According to our findings, TMD prevalence in the adult population of Jeddah, Kingdom of Saudi Arabia is considered relatively high. It was significantly higher in females than in males. Public health efforts should be directed at increasing TMD awareness in patients and healthcare professionals. Future studies should include a larger sample size using a validated screening tool such as the TMD/pain screener. It should also investigate the potential etiology in the studied population.

18. Huber MA, Hall EH. A comparison of the signs of temporomandibular joint dysfunction and occlusal discrepancies in a symptom-free population of men and women. Oral Surg Oral Med Oral Pathol 1990;70(2):180–183.