Aim: The present investigation aims to find out the frequency of congenitally missing upper lateral incisors among skeletal class I, II, and III malocclusions and to find out its variability among different genders.

Materials and methods: The study sample included orthopantomograms (OPGs) and a lateral cephalogram of 1,000 patients retrieved from previous records. Of the selected samples, 290 were males and 710 were females. Orthopantomograms helped diagnose the presence of unilateral/bilateral maxillary lateral incisors.

Anodontia is the absence of teeth. Hypodontia means absence of less than six teeth. Agenesis is defined as teeth that were unsuccessful in developing at birth. Absence of the tooth causes alignment problems, arch length discrepancies, and dental asymmetry.1,2

That the formation and maturation of the teeth are strictly governed by factors such as genetics is a well-established theory. Few missing teeth in an individual are identified to be associated with several genetic and syndromic conditions.3–6 Mutations in MSX1, PAX9, and AXIN2 in families with multiple missing tooth7–9 have been proved by several studies in molecular genetics.

Moyers stated that there are five major recognized reasons for agenesis of teeth. He stated that heredity, syphilis, and rickets might predispose to agenesis. Some mutational and evolutionary changes in the dentition also lead to disturbances in formation of the tooth.10

Bilateral missing upper lateral incisors are more common than unilateral ones. Unilateral agenesis is often associated with the microdontia of the corresponding contralateral tooth, which in turn requires higher biomechanical claims in orthodontic therapy or often leads to extraction of the hypoplastic tooth to prevent any asymmetric effects as well as a midline shift.6–8

The definitive diagnosis requires a mandatory X-ray examination in order to confirm the assumed diagnosis. After clinical and radiological proof, a decision regarding the treatment options must be made, whether it should be treated by orthodontic space closure or by space opening and implantation. Individual evaluation of the treatment choices requires a multidisciplinary approach to achieve the best possible result for the patient. The treatment depends on a number of factors such as facial, occlusal, functional, and periodontal features, as well as individual long-term stability.7–10

The demand for orthodontic treatment in cases of missing upper lateral incisors is high because of the obvious impact that this condition has on both dental and facial esthetics. This is a challenging situation that every orthodontist will encounter on a regular basis.

The aim of the present investigation was to determine the frequency of congenitally missing upper lateral incisors among skeletal class I, II, and III malocclusions and to find out its variability among different genders.

A retrospective study was carried out between January 2017 and December 2017. Orthopantomograms (OPGs) and a lateral cephalogram record search of all of the orthodontic Odia patients aged 12–18 years were taken, which were available in the Kalinga Institute of Dental Sciences, KIIT, Bhubaneswar, Odisha. This retrospective study excluded ambiguous OPGs and a lateral cephalogram of subjects with no proper birth record and distorted images. Ethical Clearance was obtained from institutional ethics committee (IEC approval no. KIMS/KIIT/IEC/135/2017).

Were set as per the following criteria:

On the basis of the inclusion and exclusion criteria, 1,000 OPGs and a lateral cephalogram were selected. Demographic variables such as gender and age were determined, as shown in Figures 1 to 3.

Of the selected samples, 290 were males and 710 were females. Orthopantomograms helped diagnose the presence of unilateral/bilateral maxillary lateral incisors. ANB angle was calculated from the lateral cephalogram in order to divide the subjects into various skeletal malocclusions. Cranio-facial syndromic patients were excluded from the study. The OPGs with evidence of impacted maxillary lateral incisors were also not included in the present investigation. 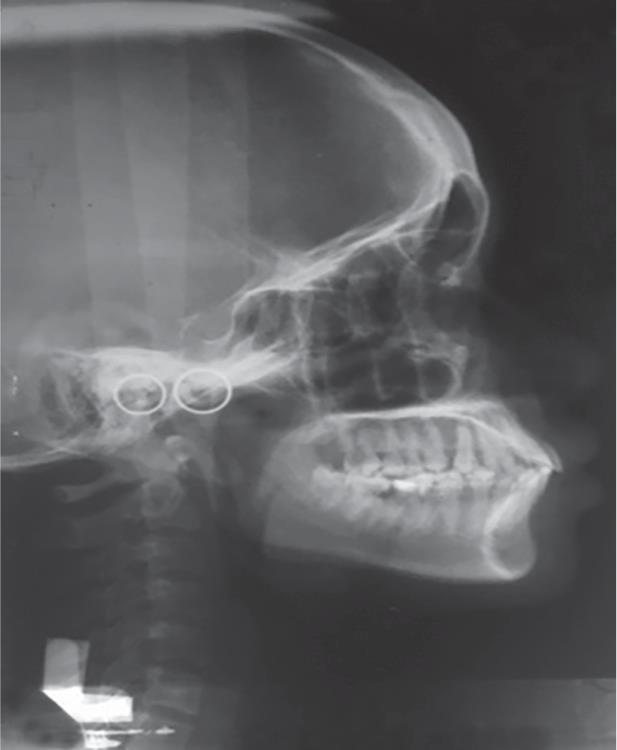 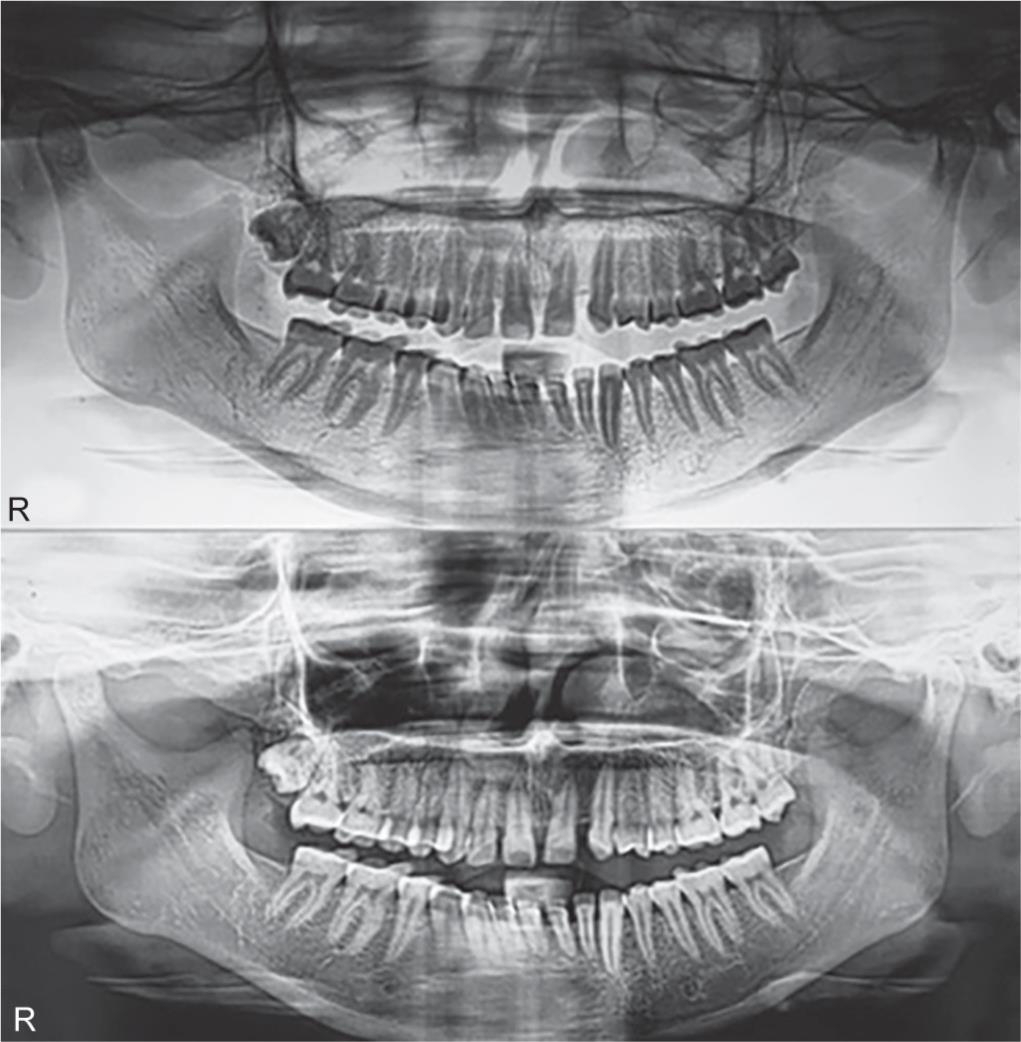 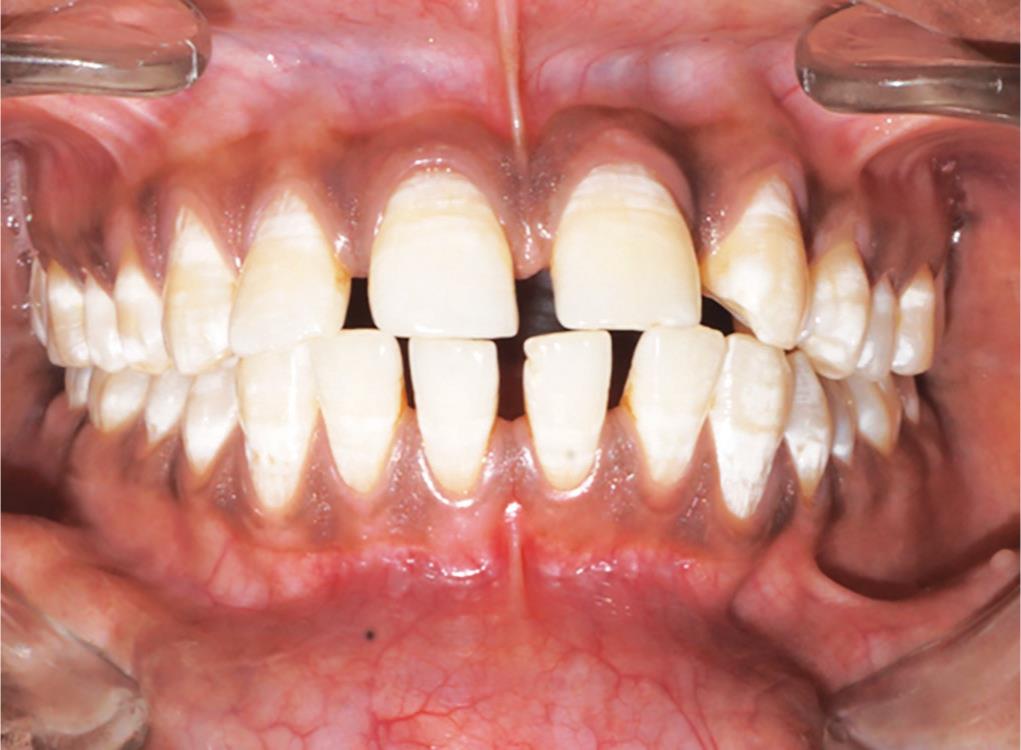 Retrospective data reveal no study being carried out to compare the frequency of congenitally missing upper lateral incisors among Skeletal class I, II, and III malocclusions in an Odia adolescent population. In the present study, the sample size was large in a sequence to acquire epidemiological and clinical information correlated to the non-existence of lateral incisors in upper arch. The utilization of OPGs permitted entry to a supply of dependable, widespread, and effortlessly available data.

The prevalence of congenital missing permanent lateral incisors in the upper arch varies significantly amongst studies.11–16 It is essential to have significant epidemiological data on various classes of malocclusion, sequentially to calculate approximately the overall time requirement for correction and management.

The samples that were considered in the present study were selected to achieve a comprehensible and suitable representation of the prevalence pattern of agenesis of the upper permanent maxillary lateral incisor in the orthodontic Odia adolescent population in Bhubaneswar, Odisha, India.

Researchers of other populations also reported a different prevalence pattern of agenesis of maxillary lateral incisors, leading to a conclusion that variations are present between different races. The reasoning to the above differences might be attributed to a racial and ethnic origin.

An investigation was done by Sofaer et al.17 in 1971 on a sample of 17,000 high school students from Hawaii. The sample ranged from a full complement of teeth to a congenitally missing maxillary upper lateral incisor. The clinical examination of the patient was done and it was cross checked with radiographs. Generally it was observed that in cases where there was a missing lateral incisor, the size of the normal central incisor was comparatively larger.

A radiographic study was conducted by Le Bot et al.,18 where a sample size of 200 males from the French population with maxillary lateral incisor agenesis was considered for checking the prevalence of missing third molars. The authors concluded that 39.6% of the study samples who reported with missing teeth had an agenesis of third molar in comparison to the control group, with a prevalence of 12.4% in the control group.

Review of literature reveals tooth agenesis being related to some tooth conditions such as supernumerary tooth, retained deciduous tooth and ectopic eruption, microdontia or peg-shaped incisors, taurodontism, and transposition. Conversely, the linkage between dental anomalies and missing MLI has been sparsely documented in the database.

A study done by Aphraim and Shubha19 stressed the importance of early diagnosis of missing lateral incisors in the mixed dentition period, its consequences, and the potential earliest management during this period.

In the present investigation, a prevalence of agenesis of missing lateral incisors as high as 3.77% was documented. In the present study, a striking increase in percentage of MLI agenesis was found in females.19 An estimated 2.8% of the females had missing upper laterals when compared to males with a prevalence of 0.9%.

A similar study was done by Horowitz11 in a sample of 1,000 subjects of the Portuguese population. He found an incidence of 1.11% of missing lateral incisors. Another study was conducted by Aasheim and Ogaard21 in a Nordic sample being screened for orthodontic examination. The authors revealed that the frequency of missing upper laterals was around 2%, which was similar to our study. Kabbani et al.22 evaluated the prevalence of a congenital absence of maxillary lateral incisors in 8,000 school children with an equal number of males and females (age range: 12–15 years) in a Syrian population. The authors concluded that prevalence of isolated maxillary lateral incisors agenesis was 1.15%. Some studies have recorded an overall prevalence of congenitally missing teeth in a range from 2% to 16.3%.23

The variability in results amongst different population might be due to genetics or environmental influences.

The teeth that most commonly fail to erupt are those that erupt in vital terminal areas of the dental lamina. The most commonly impacted tooth are the upper lateral incisor, second premolars, and third molars.

There is a close connection between agenesis of lateral incisors in the upper arch and second premolars. At molecular level, some factors affecting neural structure formation might have an influence on tooth formation. This can lead to some defects in molecular factors, which influence neural growth, leading to failure of tooth formation. The mutations in genes responsible for tooth development are marked as PAX9, MSX1, and AXIN2. Among these, MSX1 is usually related to congenitally missing third molars, second premolars, maxillary first premolar, and incisors.

The agenesis of laterals in upper arch is frequently seen in females when compared to males.11,13,14,24,25 The findings of our study also supports this literature. The explanation for the above finding could be attributed to variation in sexes owing to their differences in tooth eruption and skeletal growth.20

Though the results of the present study do not have much statistical significance as indicated by the results, it has immense clinical importance. It is very important on the part of the clinician to diagnose the type of missing laterals either unilateral or bilateral, check for the type of skeletal bases and the gender, and accordingly plan the treatment.26–29

Totally, 2,662 dental patients in Palestine were evaluated for the prevalence of missing lateral incisors. The percentage was found to be 1.91%. Unilateral agenesis is accounted for 66.6% of the total cases. Around 79% of the unilateral cases were on the left side, while 21% were on the right side. Bilateral agenesis accounted for 33.3% of the total cases.30

Isolated bilateral absence of maxillary lateral incisors is associated with decreased mesio–distal widths in both maxillary and mandibular anterior segments.31,32

The management of maxillary lateral incisors can be done either by orthodontic space closure of canine mesial positioning and reshaping or by a prosthodontic intervention.33,34 Osseointegrated implants can be used to replace congenitally missing upper lateral incisors.35–38 Customised lingual orthodontic appliances and the adjunctive use of direct skeletal anchorage derived from two palatal mini-implants was used in a patient to close the space of a congenitally absent lateral incisor.39

The strength of our study is that there is surprisingly little information in the literature on the prevalence of missing maxillary lateral incisors and the skeletal pattern in an orthodontic population. Orthodontic patients do not necessarily replicate the number of individuals in the population with tooth agenesis; this will be dependent on the availability of orthodontic treatment and its uptake in this particular population. However, retrospective studies rely on good record keeping and orthodontic patients often have more complete records. Review of literature suggests that orthodontic space closure in missing laterals produced stable results and were accepted better by patients compared to prosthetic rehabilitation.40

The limitation of our study was that it was retrospective and radiographic in nature. In future, a prospective clinical–radiographic study with a large number of samples may be considered.

Knowledge of the pattern and prevalence of tooth agenesis is important for treatment planning. If done properly and timely, an interdisciplinary treatment might prevent the patient from esthetic and functional discrepancies that may interfere with adequate development and growth, which may cause functional, occlusal, and esthetic disharmony.

The prevalence rate of congenitally missing upper lateral incisors in orthodontic adolescent Odia population in Bhubaneswar is 3.77%. The females had a greater percentage of agenesis of the upper lateral incisor (2.8%) when compared to males (0.9%). This difference might be due to genetic variations or different environmental conditions. A multidisciplinary treatment protocol must be planned to manage missing maxillary lateral incisors and to restore the impaired esthetics and function.

The comparison of frequency of congenitally frequency of missing upper lateral incisors among skeletal class I, II, and III malocclusions is vital for diagnosis and treatment planning. A multidisciplinary treatment protocol must be planned to manage missing the maxillary lateral incisor and to restore the impaired esthetics and function.