Introduction: For the restoration of grossly decayed root canal treated teeth, posts are used frequently to retain core for the definitive restoration. Therefore, it is necessary to create adequate adhesion at the post–root-cement interface for long-term performance of a post retained restoration.

Aim: To establish the outcome of surface pretreatments such as silanization, sandblasting, and silanization followed by thermal activation of fiber posts on bonding with a dual-cured adhesive resin-based cement.

Materials and methods: Eighty radiopaque, No #2 glass fiber-reinforced epoxy resin posts (Hi-Rem Posts, Overfibers, Switzerland), posts were wiped with alcohol (surgical spirit, 90% alcohol) for 5 seconds in a single stroke. A cylindrical plastic cap of diameter 10 mm and length of 15 mm, which is closed on one side, was selected. This was duplicated to form molds and fiber posts embedded perpendicularly in the polyester resin, and samples were made. Samples were randomly distributed into four groups based on the pretreatment done and each group contains 20 samples, group I—(control), group II—(silanization), group III—(sandblasting), and group IV—(thermal treatment of silane). After surface treatment, exposed post surface was uniformly coated with dual-cured resin cement. Cement was cured for 40 seconds with a halogen lamp. The samples are subjected to load in a universal testing machine (UTM) at a crosshead speed of 1.0 mm/minutes to evaluate the bonding failure at the interface.

Clinical significance: The surface pretreatment, such as sandblasting, silanization, thermal activation of silane coupling agents significantly improved, the retention of the post within in the root canal system.

For the restoration of grossly decayed root canal treated teeth, posts are used frequently to retain coronal restoration.1 The fiber-reinforced posts are introduced by Duret et al.2 Fiber post is frequently used for restoring root canal treated teeth. Fiber posts, when compared to the time, tested metal counterparts provide aesthetics, absence of corrosive reactions, comparative ease of removal in retreatment, optimal stress distribution, and adhesion.3,4 In spite of these advantages, 4.4% failures of fiber post occur at the post-restoration junction, of which 55% failures take place at the post-adhesive junction.3 Failures occur due to lack of functional alkoxy groups on the surface of the fiber post, results in insufficient and ineffective bonding of post/dual-cure adhesive resin interface.

It mediates adhesion between inorganic and organic matrices by the formation of siloxane bonds, which makes the surface less polar and hence more compatible to bonding with adhesive resin.

Surface roughening treatment with sandblasting procedure improves the bond strength by 19%.5 Sandblasting roughens the surface of the fiber post, thereby promoting the larger surface area for bonding, which creates a mechanical interlock with the resin cement. Combination—surface treatment with sandblasting followed by silanization improved the bond strength by 50%.5 Hence, the aim of the present study is to investigate the outcome of surface treatment such as silanization, sandblasting, and silanization followed by thermal activation of fiber-reinforced posts on the adhesion with a dual-cured adhesive resin-based luting agent.

Eighty radiopaque, translucent glass fiber reinforced epoxy resin posts (Hi-Rem Posts, Overfibers, Switzerland) with dimensions (diameter 2.2 mm and length 15 mm) were used in the study (Table 1). Posts were wiped with alcohol (surgical spirit, 90% alcohol) for 5 seconds. The post surface was conditioned for 1-minute with Eco-Etch Etchant that contains 37% phosphoric acid (Ivoclar-Vivadent, Schaan, Liechtenstein, USA. Lot No. U28587) and rinsed with deionized water (5 mL) for 20 seconds. The post surface is gently air-dried with a three-way syringe. A cylindrical plastic cap of diameter 10 mm and length of 15 mm, which is closed on one side, was selected for preparation of resin block. This is duplicated, and molds were made with addition silicone impression material. Polyester resin was carried into the mold. Fiber posts held with a needle holder were embedded perpendicularly in the polyester resin. The setting time of each sample was 15 minutes samples were randomly distributed into four groups based on the pretreatment done, and each group contains 20 samples.

Group I (control)—Surface of fiber post was neither treated with silanization nor sandblasting.

Group II (silanization)—In this group, post surfaces were applied with a silane-coupling agent (Monobond-S, Ivoclar-Vivadent, Schaan, Liechtenstein, USA. Lot No. E26882). Silane was applied onto the post surface with a disposable applicator tip and leftover on post surface for 60 seconds; later the post surface is gently air-dried, with a three-way syringe.

Group III (sandblasting)—In this group, the post surface was treated by sandblasting with 50 μ aluminum oxide particles using a sandblasting device (S-U Austral, Schuler Dental Germany) at 0.28 MPa air pressure for 10 seconds using 110 μ alumina particles. Surface of the post was held parallel to the direction of the incoming particle stream at a distance of 10 mm. The sandblasted post was then gently cleaned with alcohol-soaked cotton to remove any loose alumina particles.

After surface treatment, post surfaces were coated with dual-cured resin cement (Multilink Speed, Ivoclar-Vivadent, Schaan, Liechtenstein, USA, Lot No. 642977AN). Customized stainless steel metal ring of inner diameter 2.2 mm and depth of 3 mm was used for standardizing the bonding area of cement to the surface of the post. Stainless steel ring positioned onto the post surface and first increment of resin cement were applied to the post surface with a plastic instrument and cured with LED light (Bluephase C8, Ivoclar-Vivadent, Schaan, Liechtenstein, USA), with intensity of 800 mW/cm2 at a distance of 2 mm for 40 seconds. For optimal curing, resin cement was cured for an additional 40 seconds using curing light.

Increasing concern of patients towards more biocompatible and tooth-colored restoration leads to the development of esthetic post and core systems.6 Prefabricated posts became popular as they save number clinical visits by reducing laboratory procedure, removal of post system made easy and were economical.7 Reduced catastrophic fractures were seen with fiber posts when they are bonded to dentin using resin cement due to formation of a homogeneous structure with root dentin.8 Fiber-reinforced posts composed of unidirectional glass fibers (61.5 wt%) are dispersed in a polymer matrix of trimethylene-glycol-dimethacrylate (16 wt%) and urethane dimethacrylate (12 wt%) and silicon-dioxide filler (10 in wt%).

Fiber posts improve retention and mechanical performance of the restored teeth. The elastic modulus of fiber post was close to dentin (18GB) that allows the flexure of post and root together, resulting in reduced fracture of root. Another advantage is that during endodontic retreatment, retrieval of fiber post system was more easy and predictable with less fracture. Most commonly, the failure of fiber post system was noticed at resin cement–fiber post interface of due to poor bonding.9

A major drawback with prefabricated fiber posts is that the polymer matrix between the post material fibers is highly cross-linked and therefore less reactive. This makes it difficult for these posts to bond to the resin luting agents and tooth structure.10,11 It has been estimated that 60% of the fiber post failures occurred between the fiber post and resin cement.12

The success of post and core restoration depends on the adhesion between post, resin cement, and dentin interface. The surface treatment procedures often result in improved adhesion at the post–cement interface by removing the matrix of epoxy resin from superficial part and exposes the internal glass fibers. This helps in improved bonding of fiber post to bis-GMA based cement using coupling agents. Sahafi et al.16 had categorized various treatment procedures of post surface into three categories that include (1) surface roughening, (2) chemical adhesive optimization, and (3) combination of surface roughening and chemical adhesive optimization.13 Rough surface produced mechanically by sandblasting or chemically using chemical agents such as HF (20% w/v) or H2O2 (6% w/v) allows better penetration of the resin cement onto the surface of post, thus increasing micromechanical retention. Treating the surface of post with silane and followed by application of resin cement increases bond at the post–cement interface. 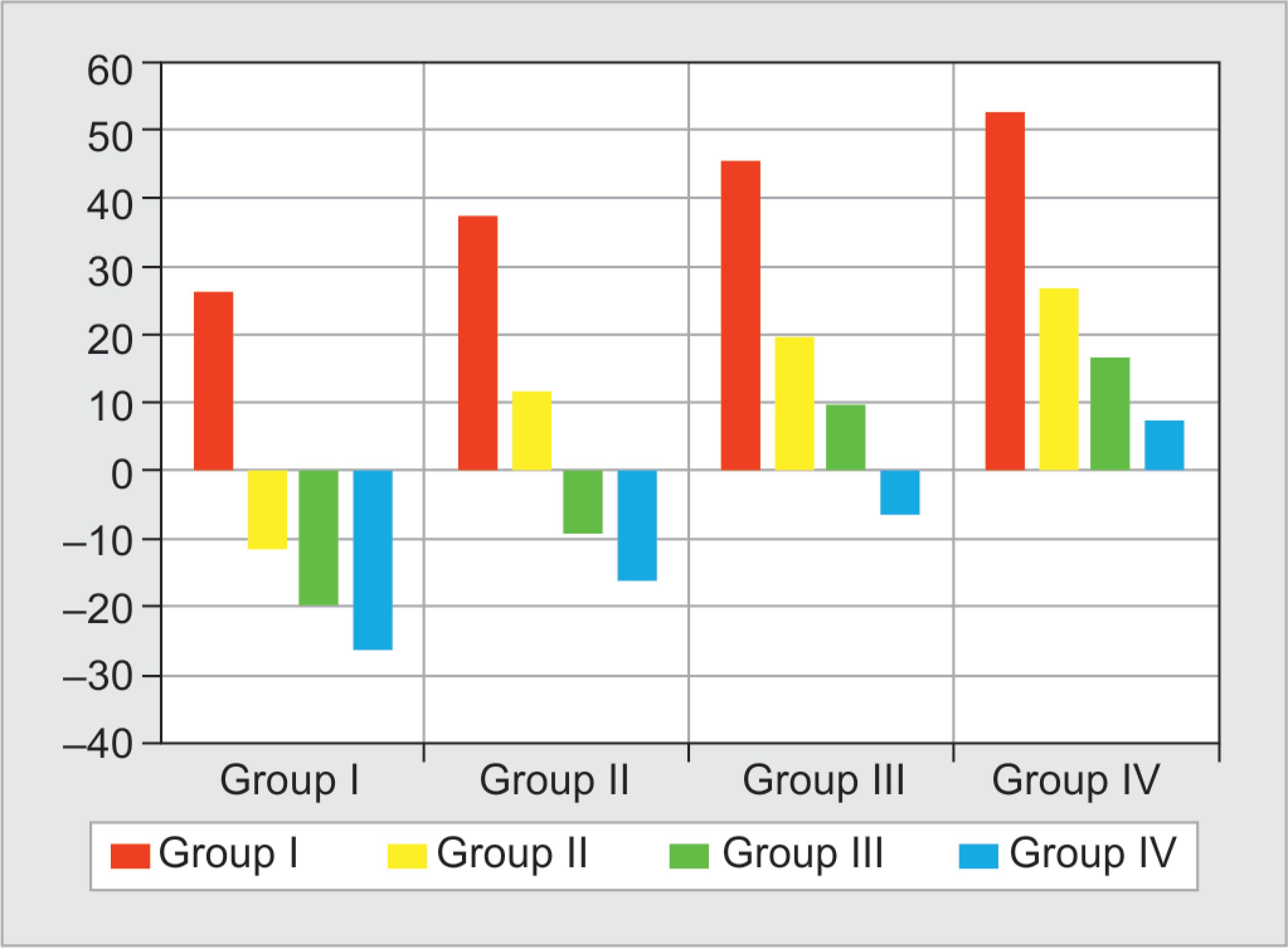 Although surface treatment with hydrofluoric acid enhances bond strength by 15%, it causes structural microscopic damage to the post. Hydrogen peroxide (6% w/v) treatment improves bond strength by 12%, but there is no standard protocol for application time and concentration of the solution.

Pretreatment with silane-coupling agent was is used frequently for ceramic prosthesis repair, all-ceramic crown cementation, bonding of ceramic brackets to tooth surfaces, and luting of fiber post to root dentin. Previous studies reported that significant improvements in bond strength after pretreatment with silane-coupling agents.16–18 However, Choi et al. reported that the application of silane to post surface results in an only minimal increase in the bonding capacity.1

Moraes et al. reported that significant improvement in the retention of post surface seen only when the surface of post is treated appropriately before silane application. Surface pretreatment of post surface removes overlying epoxy resin and exposes glass fibers, which allow the formation of siloxane bonds between silane and glass.19

Design of this study has limitation that in vitro shear bond strength values may not exactly correlate with in vivo conditions. Further clinical studies are warranted.