Aim: The purpose of this cross-sectional study is to signify malar bone anatomy and to obtain linear correlation with varied skeletal pattern by utilizing cone beam computed tomographic views.

Materials and methods: The experimental sample consisted of cone-beam computed tomography (CBCT) scans of 30 patients taken for the purpose of orthodontic treatment and peri implant planning (16 males and 14 females), 11–30 years of age (mean, 23.4 years). The sex and age were documented for all samples and nine landmarks were evaluated. The various CBCT were categorized into different malocclusions based on wits appraisal. Its prevalence was collated with age, sex and various malocclusion by Chi-square test.

Conclusion: Detailed evaluation of malar bone should be performed prior to any ortho-surgical procedure using CBCT.

Clinical significance: Our study signifies the importance of consideration of zygoma during any pre-treatment evaluation of skeletal malocclusion. It also marks the pivotal role of zygoma while considering gross facial esthetics. Precise assurance of zygomatic bone size may likewise aid the choice of fitting surgeries and determination of zygomatic implant area.

The zygomatic bone serves as a potential landmark in the assessment of facial aesthetics along with maxilla.1 It is a quadrangular shaped bone surrounded by facial bone, temporal bone and the maxilla. Zygoma anchorage system (ZAS) has lately been the area of interest among orthodontist as it has proven to be potential for securing skeletal anchorage devices that are utilized to assist various tooth movements like distalization of buccal segment in class II cases, intrusion of posterior segment for open bite correction.2 It does not have the disadvantage of anchorage loss. The zygomatic bone (ZB) is also of enormous importance in the field of trauma, reconstruction, and esthetic plastic surgery. There are many studies evaluating the stability of zygomatic skeletal anchorage system in orthodontics.3,4 However, studies limiting to morphological quantitative trait of malar bone are as yet scarce.5,6 Because of the peculiar shape of the malar bone, specific radiological landmarks or planes localization and evaluation on the bone becomes difficult. As the zygoma is used for skeletal anchorage system, its qualitative and quotative evaluation becomes overtly vital in orthodontics and dentofacial orthopedics. Till date cone-beam computed tomography (CBCT) is more routinely performed for the compendious imaging of orthodontic patients than the widely used lateral cephalograms and orthopantomograms. The CBCT scanners came into force about sixteen years ago as an adjunctive technology to meet this need, while decreasing the radiation hazards involved with full CT scans.

CBCT view permits anatomical structures to be properly represented in all three viewing planes. Landmark recognition is also vastly improved in CBCT views with magnification and adaptation in contrast. In 2016, Takamura et al.7 stated that the measurements on lateral skull films obtained from cone beam computed tomographic views were better reproducible than that obtained with lateral cephalogram views.

We hypothesized the anatomy of malar bone is correlated with the skeletal facial pattern; however, we were not able to find studies that estimated this condition in the experimented literature. Basing on our hypothesis and the clinical utility of malar bone and skeletal pattern, the objective of this cross-sectional study is to establish zygomatic bone anatomy and obtain linear co-relation with skeletal facial pattern using cone beam computed tomographic views.

After Institutional Research and Ethical Committee clearance the study was directed in conformance with the Helsinki declaration of 1975, as revised in 2000. The experimental sample consisted of CBCT scans of 30 patients taken for the purpose of orthodontic treatment and peri implant planning (16 males, 14 females), 11–30 years of age (mean, 23.4 years).

The scans were taken between 2015 and 2017. Scans taken for purpose for evaluation of trauma, pathology or surgical intervention were excluded from the study. Patients with involvement of any syndromes or cleft lip and palate were excluded in the study. 3D CBCT scans were acquired using (My ray, Hyperion X9). The landmark identification and measurement direction used in the study are given in Table 1 and Figures 1A to D. The following standardized measurement (as per Furst et al.8) were recorded 3 times under the supervision of a dentomaxillary radiology specialist.

The skeletal pattern of the skull was estimated using “Wits” estimation of jaw dysplasia. It is a simple strategy wherein the seriousness or level of anterioposterior jaw dysplasia might be estimated on a parallel lateral cephalogram. The technique involves dropping a right angle from point A on the maxilla and point B on the mandible, individually, to the occlusal plane (OP). The point of contact of the perpendiculars to OP is labeled as AO and BO, separately. BO would be situated behind AO in class II skeletal malocclusion, while in class III skeletal malocclusion, BO would be well ahead of AO (Fig. 1E). 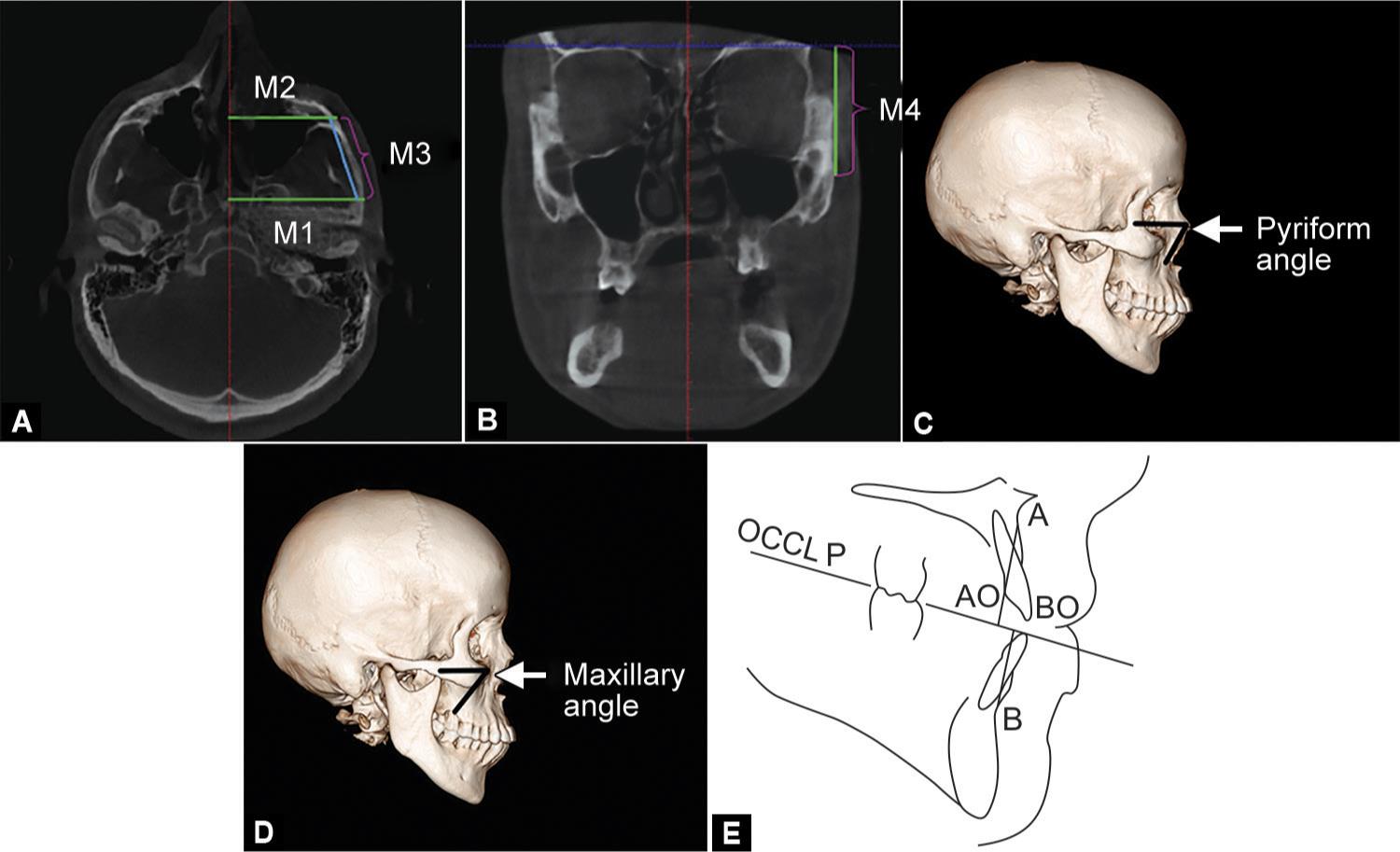 Statistical analysis was run utilizing statistical package of social sciences (SPSS Version 20; Chicago Inc., USA). The level of significance was fixed at p < 0.05. The Chi-squared test was used to analyze the variation in the mean between three groups of a variable with a normal distribution (Table 2). 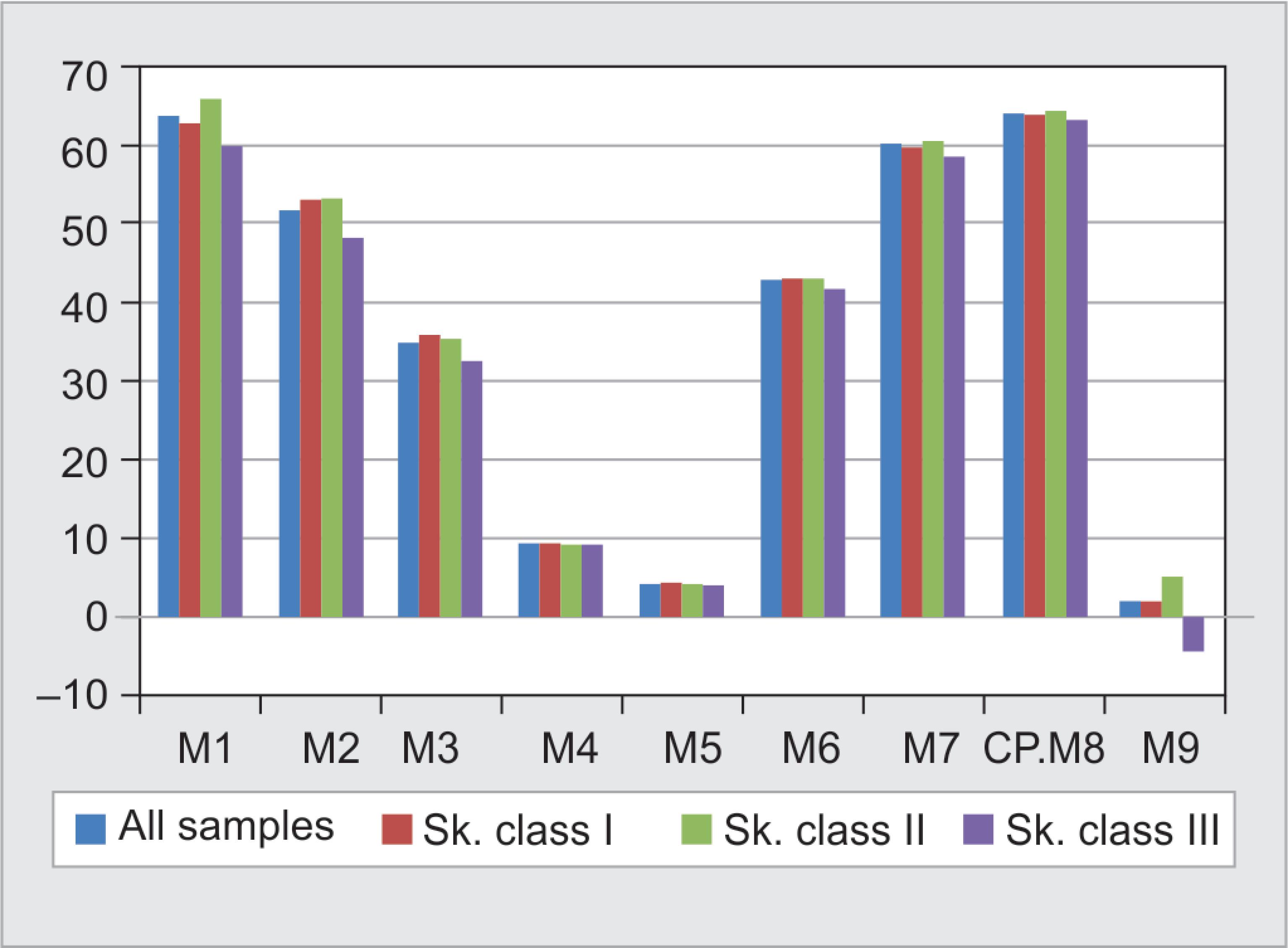 Fig. 2: CBCT values are given according to skeletal malocclusions

In the present study we evaluated the radiological parameters of zygomatic bone in correlation with skeletal malocclusion using CT scanned images. Pop culture shows people with increased malar prominence and angular faces are beautiful and fascinating. On the other hand, people with mid face hypoplasia tend to have a hollow mid face leading to greater show of the sclera inferior to the pupil.2,3 We measured the width, depth and pattern of malar bone of various skeletal pattern. Past studies conducted on zygomatic bone mainly evaluated the pneumatization, anatomy and implantation techniques and methods.4,5,9 No study attempted to coordinate the anatomy of zygomatic bone to its facial skeletal pattern. Accurate estimation of malar bone dimensions may aid in choosing suitable surgical interventions and estimating implant position during orthodontic and surgical treatment planning.10

Because of the vicinity between the malar bone and areas with the presence of air as maxillary sinus, ethmoidal sinus, and mastoid air cell framework, many studies were conducted to evaluate the presence of pneumatization of zygomatic bone.11,12 In a study conducted by Nascimento et al.13 ZB was assessed by means of CBCT views to regulate in the event that this bone can deliver attributes like pneumatizations and, in authenticating case to evaluate its dispension with respect to the laterality, age, sex and type. Another form similar to pneumatization in malar bone was observed; however, its commonness was less, i.e., 3.3% of the considered sample and was not clinically significant, therefore evaluation of pattern of pneumatization was not included in our study and we primarily focused on the variation of ZB based on skeletal pattern.

In our study, we opted employing cone beam computed tomography scan because of its accessibility as well as routine use in the center. CBCT computations on subjects at specific length were found to be highly precise and consistent.14 Zygoma has been proven to be a potential site to attain maximum skeletal anchorage. The prospective use of ZB in orthodontics, prosthodontics, oral surgery and plastic surgery is creditable. Here, we utilized the CBCT views in the planes vertical to the zygomatic bone to provide the anatomical data of the zygomatico maxillary complex. Based on the position of the maxillo mandibular jaw base, we divided the cases into three categories (as described in Results). The component of the bone alongside delicate tissues are among the fundamental variables influencing treatment protocol in the malar area.15 For accomplishing facial magnificence there must be balance among the facial promontories. The nose, lips, jaw, glabella, and malar noticeable quality identified with one another and they make a positive perspective inside the face.16,17

In a study conducted by Mendelson et al.18 comparative evaluation of hard and soft tissue midface dimensions of class I and class III individuals using CBCT was performed and he concluded class III males found to have a larger mid face deficiency than class I male. Anterior component of the class III male’s mid face showed posterior positioning. Class I and class III female sample showed similar size and position of the mid facial complex (statistically insignificant). Class III male’s mid facial deficiency was more, mid face complex positioned further laterally and elongated more anteriorly as compared to the class I male and female class III. Zygomatic bone projection was found to be less in class III compared to class I and class II as per our study, thus results of both the studies were in harmony.

The pyriform angle and the maxillary angle have been proven to be pivotal in aging of facial skeleton. Areas with a strong predilection to resorption include mainly the maxilla and the pyriform region of the nose, the superomedial and inferolateral parts of the orbital edge, and the depression in the front of jaws. These regions resorb in a unique and predictable way with maturing. The resultant shortcomings of the skeletal establishment add to the discredit of the maturing face. In patients having congenitally weak skeleton framework, the skeleton might be the primary etiology for the signs of untimely maturing.18 Our study being cross-sectional concluded insignificant changes in the two angles based on differences between facial skeletal pattern. Correlating the soft tissue along with hard tissue of facial skeleton was not included in our study marking as limitation to our project, which can be a subject of further research.

Detailed evaluation of malar bone should be performed prior to any ortho-surgical procedure using CBCT. As the treatment protocol varies for different skeletal malocclusions assessing the correlation between hard and soft tissues would become crucial for proper treatment planning.