Bromelain vs Papain Gel for Caries Removal in Primary Teeth

Aim: The aim of the study was to evaluate and compare bromelain with papain as the chemomechanical caries removal agent in relation to their efficacy.

Materials and methods: Thirty extracted primary molars with active carious lesion extending into dentin were selected. The samples were randomly divided into groups by sectioning the samples into two halves. Group I—cavity prepared using papain gel; group II—cavity prepared using bromelain gel. Time taken for caries removal in both the groups (I and II) was recorded with the help of a stopwatch. Following caries removal, the amount of remaining demineralized dentin was measured with the help of stereomicroscope and weld check (biological image analysis) software.

Results: t test is used to evaluate the significance of study parameters on continuous scale between two groups on metric parameters. The mean of residual carious dentin thickness obtained from the group II (bromelain) was 36.74 μm, which was much lower than that obtained from group I (papain) with a mean of 73.84 μm. The mean time taken in the group II (bromelain) was 335.30 seconds which was nearly equal to the mean time of group I (papain) of 352.33 seconds.

Conclusion: The amount of remaining demineralized dentin was found to be lower in bromelain group than the papain group and time taken for the carious dentin removal was almost found similar in both bromelain and papain groups. It may be concluded that bromelain was more effective in amount of caries removal than papain.

Clinical significance: Chemomechanical caries removal with the organic gels pose a great benefit as they are less invasive and has low side effects and cost-effective.

In children with dental anxiety, caries removal by means of traditional instruments, such as airotor and high-speed handpiece, is often challenging. There has been a substantial interest in developing alternative minimal invasive techniques for cavity preparation and caries removal due to the disadvantages of using conventional instruments, which results in heat, pressure, vibration, dentine desiccation, and pain.1

Chemomechanical caries removal is a minimal invasive technique removing infected dentin via a chemical agent. The objective of chemomechanical substances is to eliminate the most external portion (infected layer) where collagen is degraded, leaving the affected demineralized dentin which is proficient of being remineralized and repaired.2

Chemomechanical method of caries removal was first established in 1980 based on the studies by Goldman and Kronman with the introduction of GK-101, followed by GK-101E, which was marketed as a Caridex system. Caridex system was eventually deserted because of its lack of efficiency and convenience. Later in 1998, Carisolv system was introduced in Sweden (Mediteam). Carisolv system consists of two gels: one gel contains 0.95% sodium hypochlorite and the other gel contains three amino acids such as glutamic acid, lysine and leucine, sodium chloride, carboxy-methyl-cellulose, sodium hydroxide, and water. The Carisolv system was not that popularized because this system is expensive as well as it requires customized hand instruments for excavation.

A research project in Brazil in 2003 lead to the development of a new formula to universalize the use of a chemo-mechanical caries removal method. The new formula was commercially known as Papacarie which basically contains papain, chloramines, toludine blue, and salts and thickening vehicle making it a bacteriostatic, bactericidal, and anti-inflammatory agent.3

Bromelain is an extract derived from the stems of pineapples, although it exists in all parts of fresh plant and fruit. This bromelain has anti-inflammatory, bacteriostatic, and bactericidal properties similar to that of papain. Therefore, the aim of the study was to evaluate bromelain as the chemomechanical caries removal agent and to compare it with papain in relation to their efficacy.

Primary molars with occlusal carious lesions involving dentin and which are indicated for extraction.

Preparation of Bromelain and Papain Gels (Figs 1 and 2)

Storage and Shelf Life of Bromelain and Papain Gels

Both the gels can be stored at room temperature and they have a shelf life of 1 year.

Thirty primary molars with active carious lesion extending into dentin extracted due to normal physiological root resorption were collected and were stored in 10% formalin,4 for a period of 2 weeks according to guidelines for infection control of extracted teeth used for research and teaching given by the Centers for Disease Control and Prevention (CDC).5 Each tooth was subjected to radiographical evaluation [intra oral periapical radiograph (IOPA)] to check the extent of carious lesion. Primary teeth with active carious lesion extending to dentine without involvement of pulp were selected.1 Carious lesions on each primary molar tooth were sectioned into two halves. The sectioned halves were divided into two groups. Group I—cavity prepared using papain gel, group II—cavity prepared using bromelain gel. The teeth were decoronated at the level of cemento-enamel junction. Only the crown portion of teeth was selected, and it was further sectioned through the center of carious lesion in mesio-distal direction.3 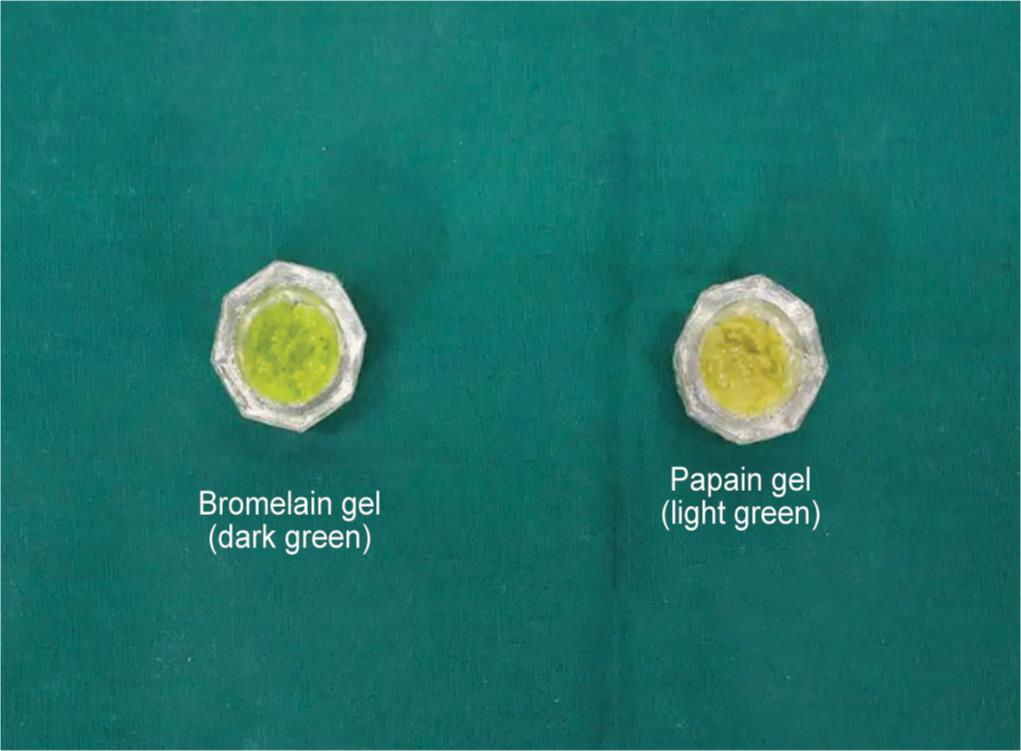 For both papain group (group I) and bromelain group (group II), respective gels were applied and left in the cavity for 60 seconds. When the gel was cloudy, it was removed gently by scraping with the spoon excavator without applying pressure, after which additional fresh gel was applied on the excavation site and carious dentin was removed with spoon excavator. Both the gels were reapplied until it presented a light coloring, indicative of non-existence of softened carious tissue. The gel in the cavity was flushed with water and cavity was wiped with a moistened cotton pellet. Complete carious tissue removal was confirmed using visual clinical criteria and by relying on tactile sensations. Complete caries removal was confirmed using a sharp dental explorer by passing it easily over hard sound dentin which did not catch or give a tug-back sensation.6 The time taken for carious dentin excavation using papain and bromelain gels in their respective groups was recorded with stopwatch and then compared.

Preparation of Specimen for Evaluation of Residual Carious Dentin (Fig. 3)

The specimens were mounted on wax bases. The wax bases were oriented on to the stereomicroscope and the images of the specimens focusing on the caries removed cavity were taken in 20× magnification. For all the samples, the thickness of the remaining demineralized dentin was measured in microns using weld check software. Three values were taken at different points from the cavity floor and the average was calculated for both group I (papain) and group II (bromelain) and comparison was done between two groups. Following these, to further confirm the remaining caries present, caries-detecting dye was used to know any amount of remaining caries. 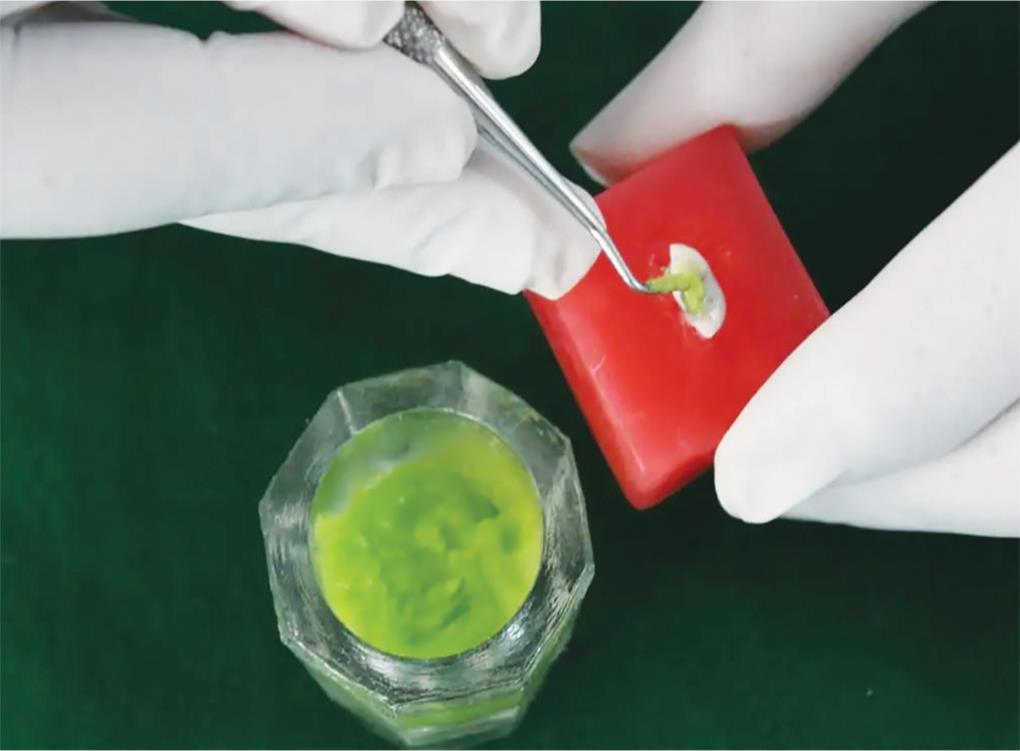 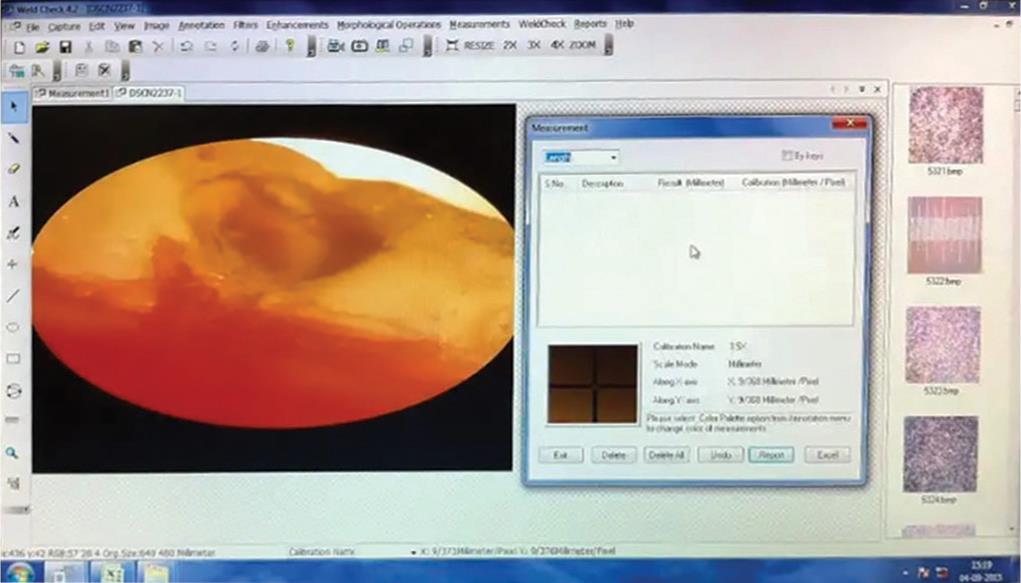 Data were recorded in excel sheets, and statistical analysis was performed using SPSS for Windows release 19.0 (SPSS Inc., Chicago, IL, USA). Student t test has been used to find the significance of study parameters on continuous scale between two groups on metric parameters.

Anxiety and fear are one of the main barriers which hamper the receptivity of dental treatment. The traditional drill and fill techniques can provoke anxiety, discomfort, and fear especially among children.7 In children, it is difficult to differentiate between fear- and anxiety-derived behavior problems.8 The chemo-mechanical caries removal method was developed to overcome these obstacles and to preserve as much dentin as possible. This method uses substance that softens pre-degraded collagen of the carious lesion and promotes its easy removal. Chemomechanical caries removal does not affect the adjoining healthy tissues and avoids pain stimuli. Chemomechanical caries removal can be used safely and efficiently in treating special healthcare needs patient.9 Papain and bromelain gels: the gels used in this study are natural products consisting of enzymes, papain, and bromelain which are extracted from raw papaya fruit and pineapple fruit/tree, respectively.

Papain is an enzyme similar to human pepsin. It has proteolytic, anti-inflammatory, anti-bacterial, and has whitening properties.10 Papain acts only on mutilated tissue due to the absence of the anti-plasmatic protease and α-1-antitripsine, which inhibits its proteolytic action on normal tissues.11 Guzman and Guzman performed clinical studies on patients with skin lesions caused by burns, perceiving that the enzymatic action of papain was considered excellent in areas with necrotic and purulent processes.12

Bromelain contains a complex mixture of different thiol-endopeptidases and other partially characterized components such as glucosidases, peroxidases, phosphates, glycoproteins, cellulases, and carbohydrates. It is made up of 212 amino acids and the molecular weight is 33 kDa.13,14 Bromelain is stable at pH 3.0–6.5 and once it has combined with its substrate, the activity is no longer susceptible to the effect of the pH. Bromelain also contains sulfhydryl group which is responsible for its proteolytic action. Bromelain when applied topically as a cream (35% bromelain in a lipid base) can be beneficial in the elimination of burn debris and in acceleration of healing. A nonproteolytic component of bromelain is responsible for this effect. This component, referred to as escharase, has no hydrolytic enzyme activity against normal protein substrates or various glycosaminoglycan substrates.15 Collagenase gets activated by bromelain in living tissue which acts on denatured collagen in the eschar. This produces a demarcation between living and dead tissue.16 Bromelain has been broadly used in food industry; for meat tenderization, protein hydrolysate production and as active element to provide gentle peeling effects in cosmetic industries.17 In textile industries, bromelain is used for decomposing or partially solubilizing protein fiber from silk and wool.18 The use of bromelain as hydrolyzing agent for the release of antimicrobial peptides of leather jacket’s insoluble proteins had been reported.19 Bromelain has very low toxicity, with an LD50 greater than 10 g/kg. Toxicity tests on dogs, with increasing levels of bromelain up to 750 mg/kg administered daily, showed no toxic effects after 6 months. Dosages of 1.5 g/kg/day administered to rats show no carcinogenic or teratogenic effects.20 In human clinical tests, side effects have not been observed. Bromelain supplementation up to 460 mg has been shown to have no effect on heart rate or blood pressure.21 In both the gels, an anti-oxidant, d-α-tocopherol acetate, was added to reduce the oxidative stress produced by the bacteria. In addition, a humectant (glycerine), an emulsifier (amylopectin), a thickener (carbopol), and a coloring agent (green apple) were included. Propyl p-hydroxybenzoate, a natural material found in many plants, was used as a preservative and distilled water was used as a vehicle.22

In the present study, the mean time taken to remove carious dentin in group I was 352.33 seconds (Table 2) which was similar to the study reported by Jawa et al. (340 seconds) and Divya et al. (359.60 seconds) which were done by Papacarie caries removing agent, containing papain as the main ingredient.23,24 The experimental group, i.e., group II where bromelain gel was used also showed similar results of mean time 335.30 seconds (Table 2). There were no previous studies reported in relation to the time taken for caries removal with bromelain enzyme. In the present study, the difference in time taken for caries removal in both the groups was not statistically significant with almost similar timings.

The main limitation of this chemomechanical caries removal agents was that time involved in removing carious dentine was more when compared to traditional high-speed handpiece.

Manuscript was prepared based on collaborative work of all the participating authors.