Aim: To test the hypothesis that skeletal and dentoalveolar effects are both important in skeletal class II malocclusion corrected with the Forsus fatigue-resistant device (FRD).

Materials and methods: A total of 35 patients (16 females and 19 males; age 12.0 ± 0.6 years) with skeletal class II malocclusion treated with the Forsus FRD were included. Lateral cephalometric radiographies before and after treatment were collected. Cephalometric analysis and superimpositions were applied. Pancherz’s analysis was performed to discover the skeletal and dentoalveolar effects on all patients and 60% contribution was set as a milestone to classify. Statistical comparisons were performed by paired t testing (p %3C; 0.05).

Clinical significance: The mechanism of skeletal class II correction with Forsus FRD may divide into mandibular growth, dentoalveolar effects, and both.

Forsus FRD (3M Unitek, Monrovia, California) was developed by Bill Vogt in 2001.3 Forsus FRD allows flexibility in the position of the mandible as compared to the Herbst appliance, which advances the mandible rigidly.2 Forsus FRD is a fairly effective fixed functional appliance. It can exert consistent force, the level of which can be adjusted by choosing the pushrod in five different sizes to satisfy varies clinical situation.4 A 226 g force can be delivered when the spring of the Forsus FRD is compressed to 12 mm.4 Class II correction with Forsus FRD can be achieved in 4–6 months, and stable mandibular advancement can be achieved in the following 24 months after the 6 months’ active treatment.5

A total of 35 subjects (age 12.0 ± 0.6 years) with skeletal class II malocclusions (16 females and 19 males) were included in the present study. Subjects were obtained from the Department of Orthodontics, West China Hospital of Stomatology, Sichuan University.

The inclusion criteria for present study are as follows: (1) skeletal class II malocclusion in the early permanent dentition, (2) a retrognathic mandible, (3) in or before the pubertal spurt (evaluated by cephalometric radiographs, stages 2 and 3 based on the method of an improved version of the cervical vertebral maturation method),8 (4) the MP-SN angle not exceeding 40° and the MP-FH angle not exceeding 33°, and (5) no signs of temporomandibular joint disease. The exclusion criteria include: (1) class II malocclusion due to a prognathic maxilla, (2) patients in the postpubertal period, (3) vertical growth pattern, (4) poor oral hygiene, and (5) temporomandibular joint disease.

Bands with a headgear tube and 0.022 × 0.028 inches slot preadjusted edgewise brackets were ligated with 0.019 × 0.025 inches stainless steel archwires in all patients. The entire upper and lower arches were laced tightly under the archwires. The wires were cinched back in both arches before the insertion of the Forsus FRD. The EX2 module of the Forsus FRD was selected and fixed according to the manufacturer’s instruction and removed after mean time 6.4 ± 0.2 months.

The effects of Forsus FRD were evaluated by lateral cephalometric radiographs before treatment (T1) and after treatment (T2). All the cephalometric radiographs were taken on the same X-ray equipment. All the cephalometric tracing, analysis, and superposition were done with Dolphin Imaging Software Version 11.7 (Dolphin Imaging and Management Solutions, Chatsworth, California). The skeletal and dentoalveolar contributions to skeletal class II correction were analyzed according to the method of Pancherz.9 Sixty percent was set as a milestone to classify differential contributions of skeletal and dentoalveolar effects. All measurements were evaluated three times, repeated after a 2-week interval by the same orthodontist (HG.L) and checked by another orthodontist (Y.H). Any disagreements were resolved to the satisfaction of both observers. Changes within each group between after (T2) and before (T1) measurements in skeletal, dentoalveolar, and soft tissue were evaluated by paired t testing with Statistical Package for Social Sciences (SPSS; Version 18.0; IBM, Armonk, NY). The 5% significance level was set to interpret all statistical tests in the present study.

This study was trying to discover the comprehensive effects of the Forsus FRD on skeletal class II malocclusion correction. Pancherz’s analysis combined with cephalometric superimposition were able to reveal the sagittal skeletal and dentoalveolar contribution to the correction. No consensus5 was reached in the skeletal effects of the Forsus FRD until now. Some researches5,10 have revealed that the Forsus FRD was effective in skeletal class II correction mainly by combination of maxilla growth restriction and mesial movement of mandibular incisors and first molars. It was reported that the Forsus FRD brought no statistically significant skeletal changes in some studies.11 Differential response was detected in the present study. No previous paper was focused on differential contributions of skeletal and dentoalveolar effects in class II correction with the Forsus FRD. In the present study, the proportion of skeletal effects varied from 92.9 to 2% in overjet correction and 86.2 to 2% in molar relationship correction. Correction of class II malocclusion was resulted from differential combinations of skeletal and dental effects. Therefore, the mechanism for skeletal class II malocclusion correction indeed varied with different cases. It is difficult to simply compare the skeletal and dentoalveolar contributions in the effects of Forsus FRD in different cases with different mechanisms. This can solve the existed controversy to some extent. Different investigated subject may lead to different results. Previous studies analyzed subjects as a whole group and thus missed some information.

The ANB angle and Wits values decreased significantly in four groups. This may result from the skeletal effect of Go-Pog increase in all four groups and maxilla restriction in SG. It is still difficult to distinguish the effects from growth and that of the Forsus FRD. Dentoalveolar changes can be detected in four groups. Significant correction of overjet and molar relationship was related to retroclination of upper incisors and more significant proclination of lower incisors in the present study. Mandibular molars moved mesially and extruded in four groups. Distal movements of maxillary molars have been reported after application of the Forsus FRD,3 while similar results can’t be detected in the present study.

The reason for different mechanisms in skeletal class II correction after Forsus FRD was unclear. Variations may be due to different inclusive criteria, study methodologies, and difference in anatomy.6,12 Facial growth pattern and the gonial angle might affect the extent of skeletal effects.1,9,12 Oztoprak et al.13 found that no significant skeletal changes can be detected and skeletal class II correction improved primarily from the dentoalveolar effect when the study sample was after the pubertal spurt. Certainly, it is difficult to exclude the influence of growth from the skeletal effect in the present study, especially that in the present study four groups showed mandibular body growth. And this is a long-lasting debate in functional appliances. It can be summarized that Forsus FRD can result in mesial dentoalveolar movement definitely and may induce mandibular growth. And the contributions of skeletal and dentoalveolar effects varied in different cases. It is hard to conclude the effects of the Forsus FRD in one pattern. Another possible reason for the different mechanism is the masticatory muscle force. Heavy masticatory force tends to move the mandible back. Force generated by the Forsus FRD move the arch in opposite direction and resulted in more dentoalveolar effects.

The effect of the Forsus FRD on the temporomandibular joint (TMJ) is the most concerned subject. The studies on this project were controversial.13,16,17 It has been revealed that functional appliances have no adverse effects on TMJ at various ages from puberty to adulthood.16 Forsus FRD displaces the mandible forward, translates the condyle out of the condylar fossa, and transmits forces to the dentition and the basal bone. In the present study, values related to the mandible (Co-Gn, Co-Go, and Go-Pog) increased significantly in AG, SG, and SDG patients. Temporomandibular joint modification can be one of the explanations for these changes. It has been revealed by previous studies.5,16,18 Karacay et al.18 found the adaptive growth in the condyle after a 5.2 months treatment period with Forsus FRD. Franchi5 found that the Forsus FRD induced a 1.5 mm increase in the mandibular ramus height (Co-Go) compared with untreated patients. Sex difference was not included in the present paper. Gomes and Lima17 found that there was no clear conclusion about the effects of sex differences on annual mandibular growth rates in adolescents. Another possible explanation for the mandibular increase might be the change in the pogonion location or the repositioning of the anterior mandible rather than its forward growth.13 Values related to the length of the mandibular body (Go-Pog) increased significantly in DG patients. It could be the contribution of the differential growth of the mandible.

Lower incisors proclined significantly in four groups. This rang a bell on the periodontal situation and torque assessment for lower incisors before the Forsus FRD application. Some authors19,20 claimed that the gingival recession or bone loss could be detected if incisor proclination happened in class II patients. The gingival recession rate in the male is higher than that in the female, is higher in the mandible than that in the maxilla, and is higher on the facial surfaces than that on the lingual surfaces.21 And the final alveolar bone thickness rather than the initial alveolar bone thickness is significantly associated with the change in inclination.22 Prevention of unnecessary lower incisors proclination should be taken. Lace the entire lower brackets under the archwire with cinch back was used in the present study. The proclination of the mandibular incisors was still observed. More methods to increase lower incisors anchorage can be taken, such as greater size of the rectangular archwire, negative crown torque on the lower incisors, bracket with high negative torque, and miniscrew anchorage. Miniscrew anchorage has been focused by many authors to control the proclination of the mandibular incisors.23,24 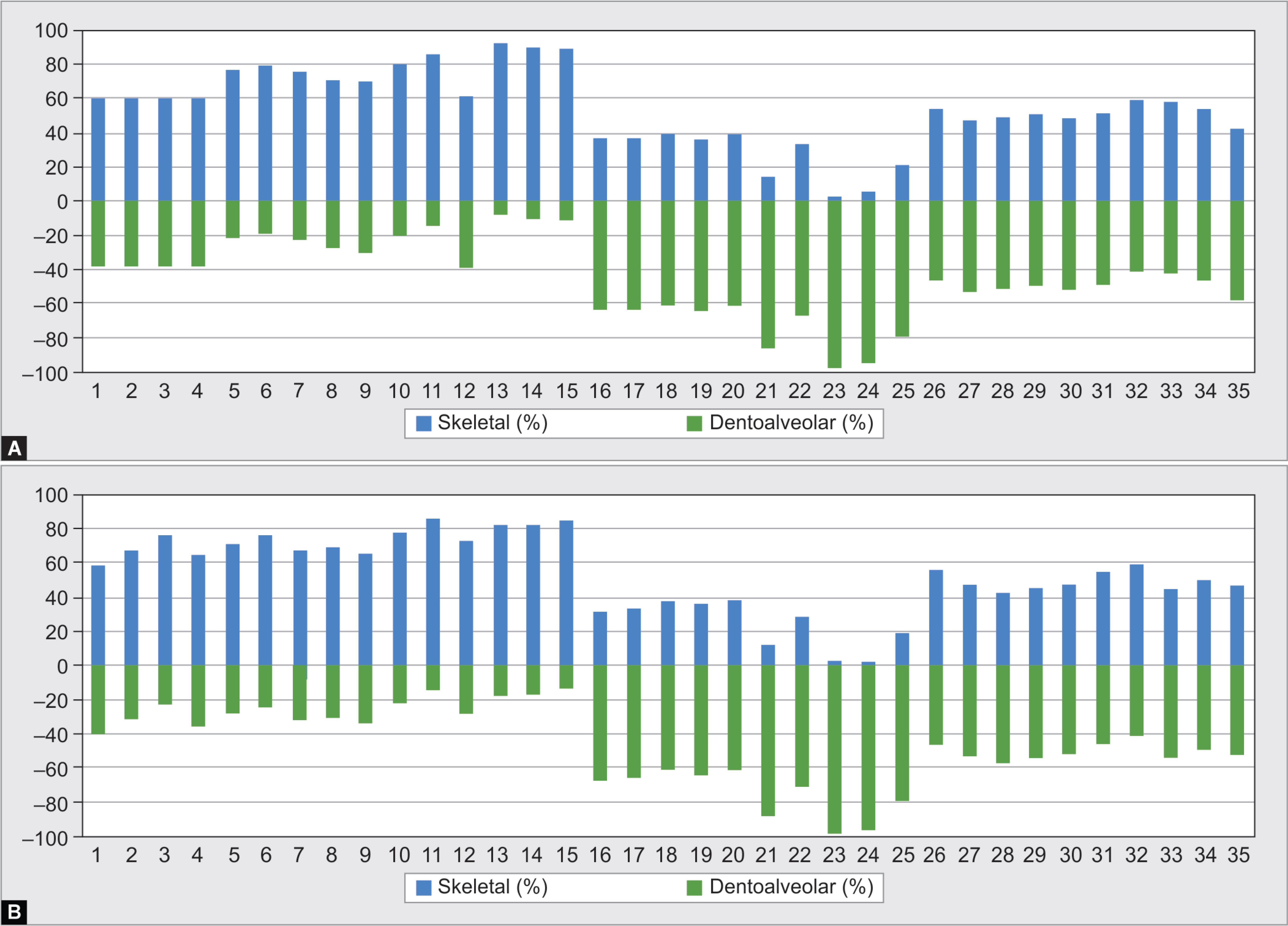 Hegang Li and Xun Ren are authors contributed equally to this work.