Materials and methods: Four 3-D finite element analysis (FEA) models of mandible having different implant systems with dimensions 8.0 mm × 5 mm in the second premolar and molar region were developed. In these models, abutment was tightened and 3-unit implant-supported Y-TZP FPD were cemented. A lateral force component of 100 N at 30° to the occlusal plane and a vertical intrusive force component of 250 N were applied to the central fossa of the FDP and the stress on bone around the implant was analyzed by FEA.

Clinical significance: From this study, it was found that out of all the implants used for the study, the Nobel Speedy Groovy implant system favored more equitable load distribution due to the platform switch design contrary to the other systems and at the cancellous bone the least load was transferred by the Nobel Active implants due to the reverse buttress thread design and larger thread pitch.

Edentulousness has been a problem to mankind since the ancient time. Historic solutions for edentulousness included transplantation of cadaveric and animal teeth and replacement with artificial teeth made of vulcanite or metal, which could be fixed to the adjacent teeth or removed by the user. With advancement and understanding of occlusion, better techniques of tooth replacement were introduced. The developments were done keeping in mind the three primary goals, i.e., comfort, function, and aesthetics.1

After placement of the fixed partial denture, the edentulous ridge in the region of pontic tends to resorb, thereby creating dark spaces between the pontic and ridge, which hamper aesthetics. Occlusal overload of abutment teeth is a common scenario that results in periodontal destruction and subsequent loss of abutment tooth and frequent fracture of the connector between pontic and retainer.

In view of all these problems, a third modality of tooth replacement called the dental implant was brought into existence, after the serendipitous discovery of the phenomenon of osseointegration by Professor Branemark in 1952.

Since the last 40 years, dental implants have become very popular for the treatment of fully or partially edentulous patients. With the better understanding of biocompatibility of titanium and effective osseointegration achieved by hydroxyapatite plasma-coated surface, implant therapy has reached new frontiers. The success and treatment outcome of the implant will depend on the biomechanical interaction between implant and osseous tissue. The value of stress in the bone will determine whether bone formation or bone resorption will take place. If stress value is low around the implant system, it will result in disuse atrophy, which is similar to the loss of bone in extraction of the natural teeth. High level of stress in the bone can lead to pressure necrosis and subsequently failure of the implant.

The finite element model (FEM) has been used in engineering for years to measure stress. It is used in dentistry to investigate the structure of teeth, biomaterials and restorations, dental implants, and root canals. Metal-free restorations are more popular compared to porcelain fused to metal (PFM) because of advances in material and fabrication technologies. The most recent metal-free material is yttrium-oxide partially stabilized (Y-TZP) zirconia. Y-TZP has superior mechanical properties like strength and high fracture resistance as compared to other metal-free systems. Oxide-containing ceramics have high biocompatibility, high abrasion resistance, improved color stability, and aesthetics.2 However, the comparison of stress distribution on the bone with different implant systems under different loading conditions has not been sufficiently assessed. Therefore, the purpose of this study was to compare stress distribution on the cortical and cancellous bone in a three-unit implant-supported yttrium tetragonal zirconia polycrystals (Y-TZP FPD) in four different widely used implant systems under different loading conditions by using FEA.

In the present in vitro study, four geometric models were created using computer-aided three-dimensional interactive application (CATIA) program (version 12) and then converted into 3-D FEMs by using the Hypermesh software 7.0 to represent an edentulous human mandible having four different commercially available implants. The model included mucosa, teeth with dentine, and periodontium. Two implants were placed over the second premolar to second molar region supported by the yttrium oxide partially stabilized tetragonal zirconia polycrystalline fixed partial denture. The models were then subjected to a 250 N vertical intrusive load and lateral load of 100 N at an angle of 30° representing the masticatory force applied to the fixed dental prosthesis. The ANSYS (analysis system) software (version 12) was used to evaluate the resultant von Mises stress induced on the crestal bone.

The geometric model of half of the mandible consisting from the central incisor to the second molar region, with missing second premolar, first and second molar, was developed using computed tomography (CT) scan (SIEMENS, DICOM, Syngo CT2006 C2 format) of a patient having cross-sections of 0.25 mm for improved resolution. Total 218 sections of 640 × 640 voxels each were taken. The DICOM data were then converted into the geometric model using the MIMICS software. This data were exported to RAPIDFORM (Geomagic, Asia Pacific) in the STL format to create the surface data. The surface data are converted to the IGES format using HYPERMESH. In HYPERMESH, the individual parts like enamel, cementum, compact bone, and periodontal ligaments (PDL) were then discretized and assembled.

Development of Various Components of the Model

Each component was designed separately and then assembled. The mandibular residual ridge of each model was represented by moderate resorption. The mandibular model consisted of three layers, the mucosa, the underlying cortical bone, and cancellous bone. This residual ridge supported the implants with the overlying attachments and the prosthesis. Two titanium implants from four major implant systems, i.e., ADIN Swell implants (Fig. 1A), Nobel Biocare—Nobel Active implants (Fig. 1B), ADIN—Touareg Closefit WP (Fig. 1C), Nobel Biocare—Nobel Speedy Groovy implants (Fig. 1D), implants having length and diameter of 8 mm and 5 mm, respectively, were modeled in the second premolar and second molar positions in the mandible. Abutments were modeled and fixed to the fixture with 25 N cm torque. A three-unit framework Y-TZP was modeled according to the manufacturer’s instruction. The Y-TZP fixed partial denture was cemented to the abutments with a dual-cure resin cement (RelyX ARC, 3M ESPE AG, Seefeld, Germany) having 0.025 mm thickness.

The creation of FEM was the next step. This is known as the meshing of the model and was done with the computer program—Hypermesh 7.0—in which the model was subdivided into elements whose apexes meet to form nodes. These elements remained in contact irrespective of the size and nature of stresses generated in a computer simulation. 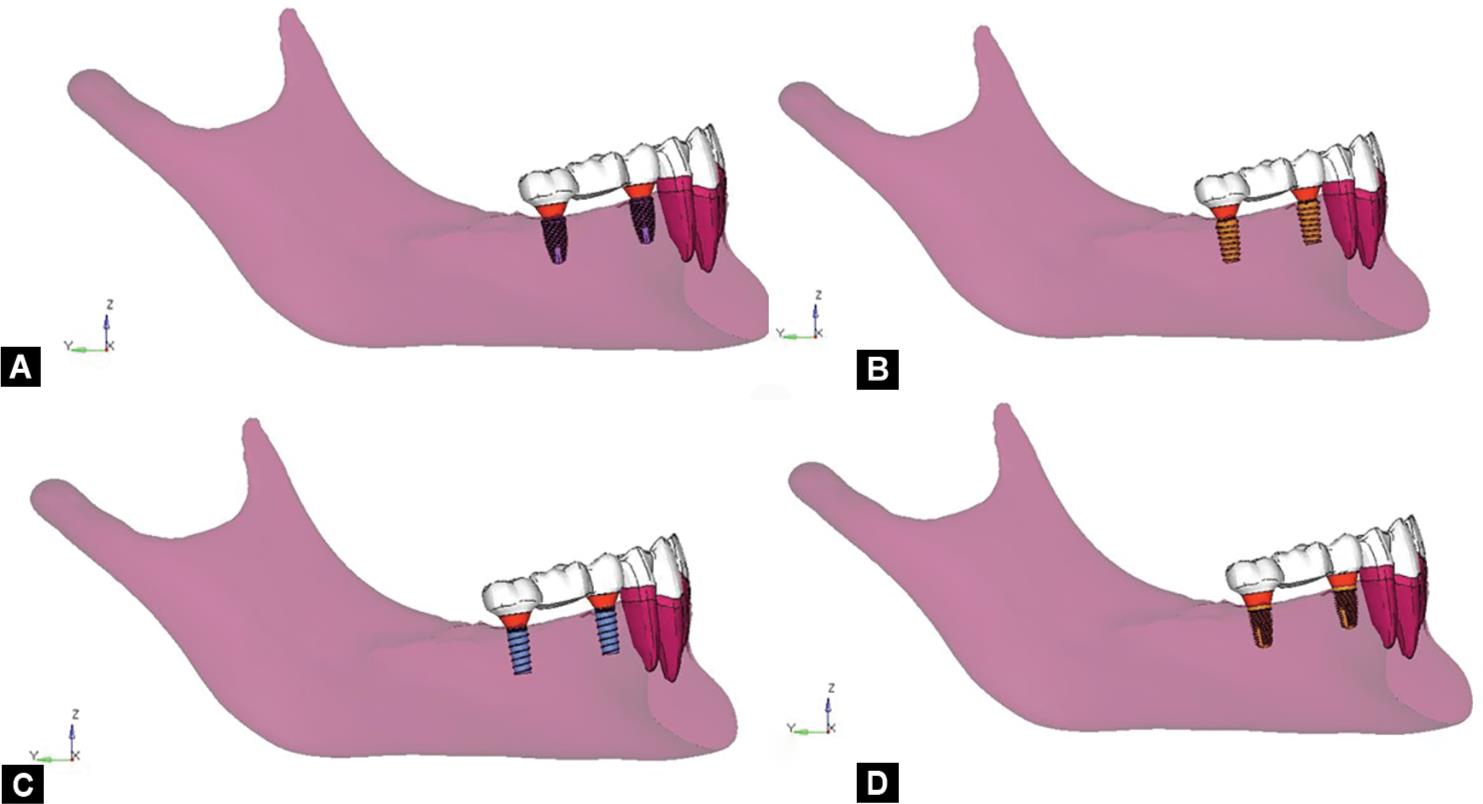 A functional force analogous to occlusal loading of 250 N was applied vertically and a 30° lateral buccolingual force of 100 N was projected at the central fossa of the three-unit FDP (center of mastication) and the stress patterns produced under such loading within the models were measured.

Following loading, the maximum von Mises stress at the implant–bone interface and along the different layers in all the models was assessed using the finite element program (ANSYS software, version 12).

Several implant concepts have been developed but bone loss and implant failure still remained concerns to the clinicians and the patients. Functional loading creates strain, resulting in bone remodeling around implants. Therefore, long-term survival of dental implants depends on proper biomechanical considerations.3–9 For this, stress analysis of the bone implant and mechanical interactions are important.10,11 To investigate stress distribution around the peri-implant bone, various methods have been currently explored. In this study, a 3-D FEA was conducted to find the stresses in four widely used implants systems and comparing the stresses they impart on the surrounding bone. Most FEA models show a state of complete osseointegration, which usually does not occur so exactly in clinical situations. The aim was to compare, by means of three-dimensional finite element simulations, load transmission on four commercially available osseointegrated implants in functioning conditions. Two types of loads were projected to the Y-TZP framework. All the materials were considered to be hemogeneous and isotropic, which is the limitation of the study. When applying FEA to the prosthesis, we should consider not only axial loads but horizontal and combined loads too. This physiological occlusal loading will result in localized stress at cervical area and at the implant neck.12,13 The nodal points of load application were on the buccal side of the framework in both types of loading conditions. 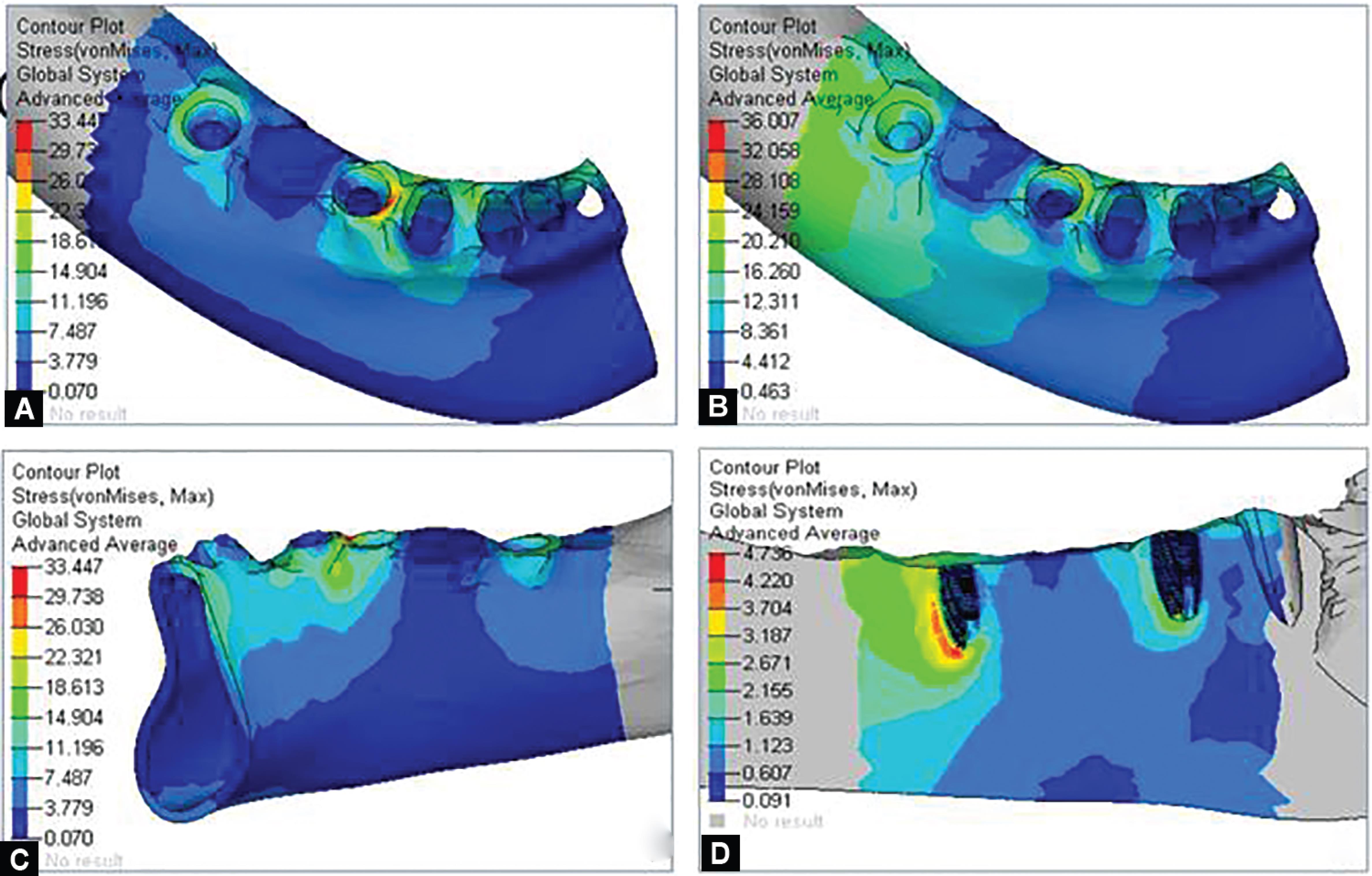 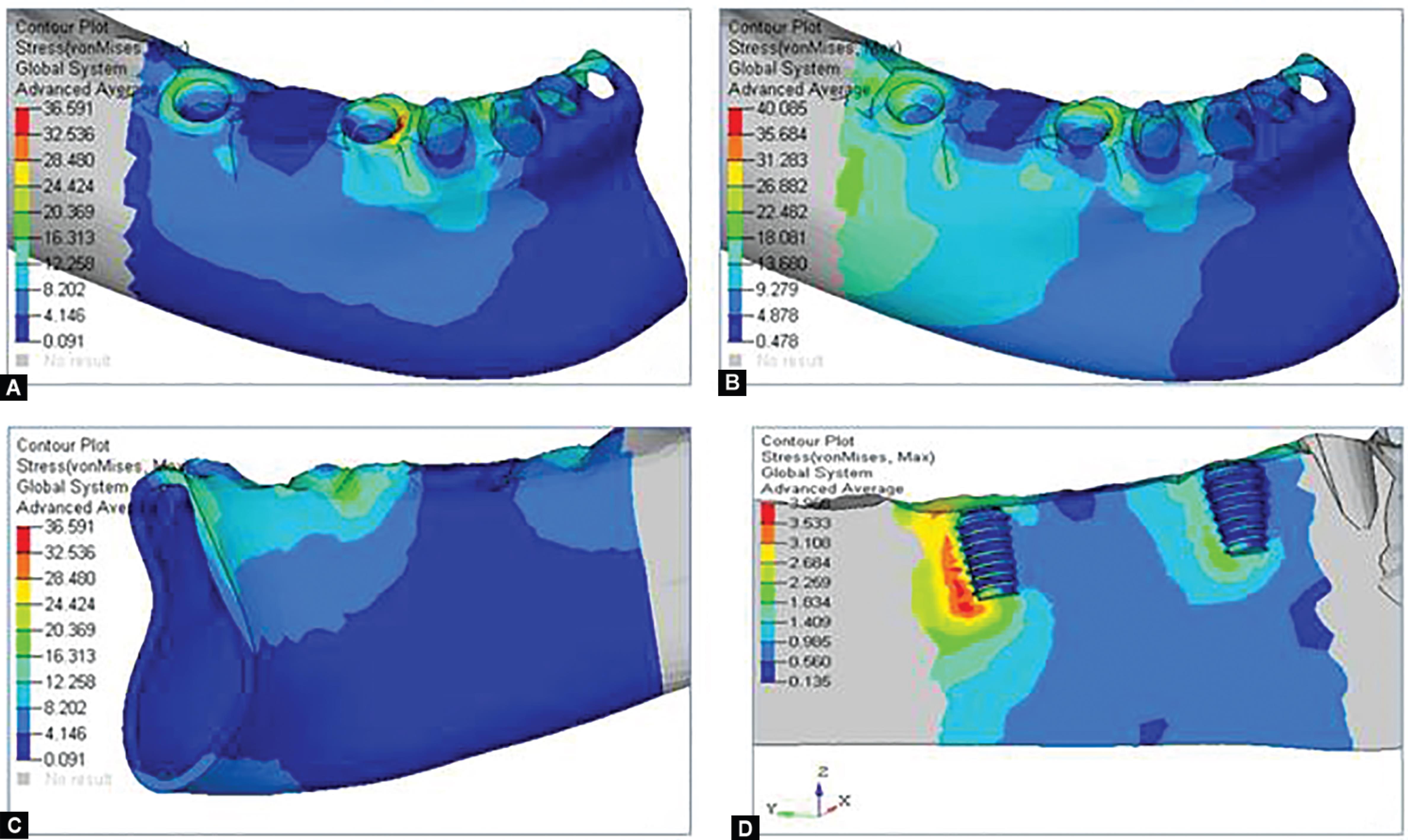 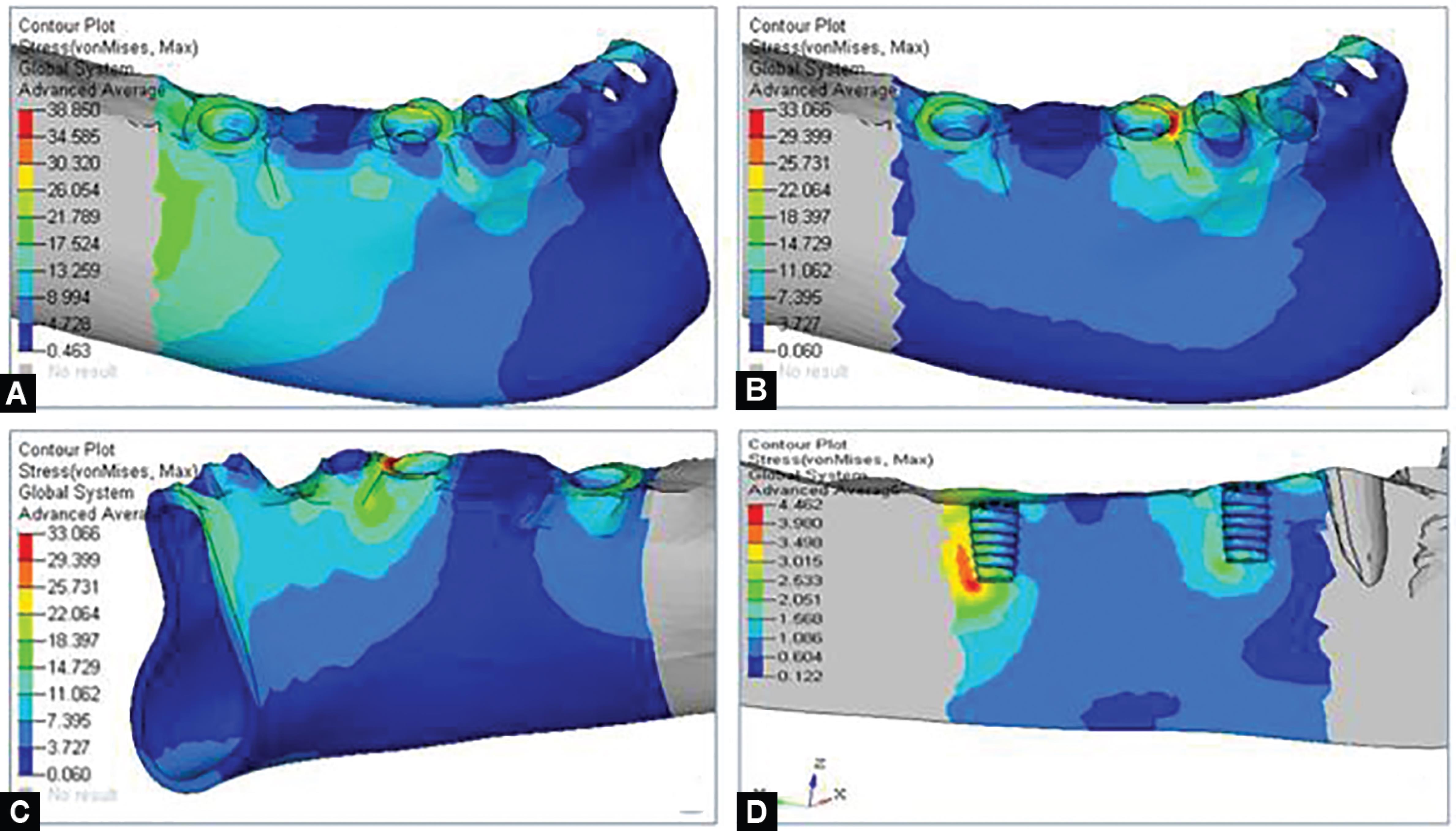 The results revealed that maximum stress values differ for the different implant systems under both types of loads (100 N and 250 N), because constraints and geometry were different for different analyzes. The structure response was the same, even though maximum stress values varied. The maximum stress values on the cortical bone under the same loading conditions were on ADIN Touareg Closefit WP, i.e., 40.1 MPa, followed by Nobel Active implants, i.e., 38.8 MPa, ADIN Swell, i.e., 36 MPa, and the least for Nobel Speedy Groovy, i.e., 32 MPa. A common finding from all the models was that maximum stress concentration at the bone–implant interface was at the level of the neck of implant. This is in agreement with the findings of Hoshaw et al.14 Bozkaya15 found overloading occurred near the superior region of the compact bone and concluded that the crestal module may play a role in minimizing stresses to bone. On the contrary to the study conducted by Bozkaya,15 the crest module of the ADIN Touareg Closefit WP implant system had a narrower crest module than the outer thread diameter and all the other three implant systems had a larger crest module. This led to the increased stresses on the compact bone, which ultimately will lead to more of the crestal bone resorption. These results are tabulated in Table 2. 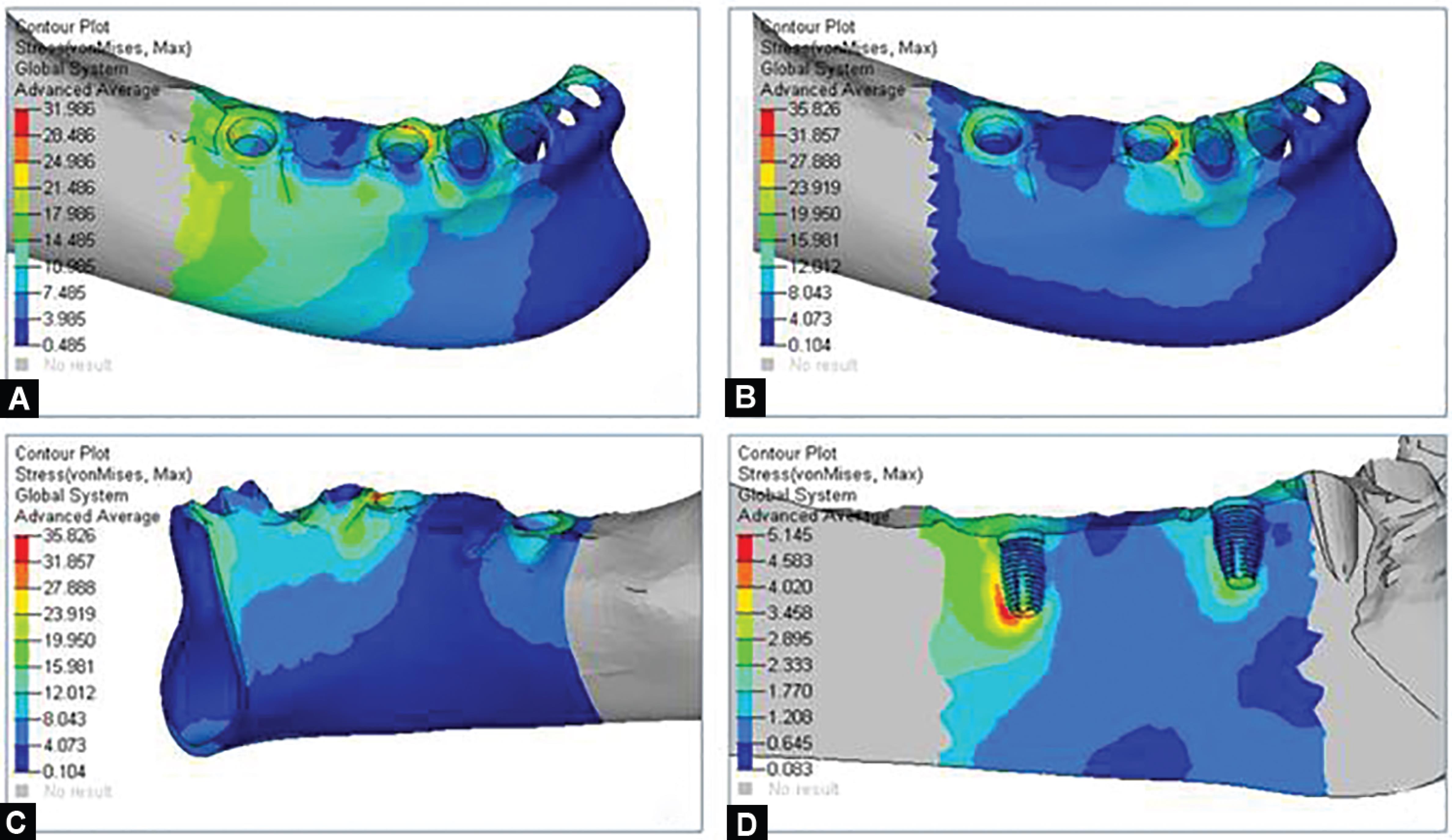 Thread pitch is the distance between adjacent threads of an implant. Distance between the center of two adjacent threads, measured parallel to the axis of an implant, is defined as thread pitch.17 Smaller the pitch, more threads on the implant body, thus the greater surface area per unit length of the implant body if all other factors are equal. The designs of the threads in dental implants include square, V-shaped, buttress, and reverse buttress. The square or power thread transmits better compressive loads due to more surface area. At the cancellous bone, maximum von Mises stress was seen at V-thread design, i.e., for the Nobel Speedy Groovy implants. Least von Mises stress at bone is with the reverse buttress thread, i.e., for the Nobel Active implants. This is in agreement with the findings of Oswal et al. who conducted a study on influence of three different implant thread designs on stress distribution.18 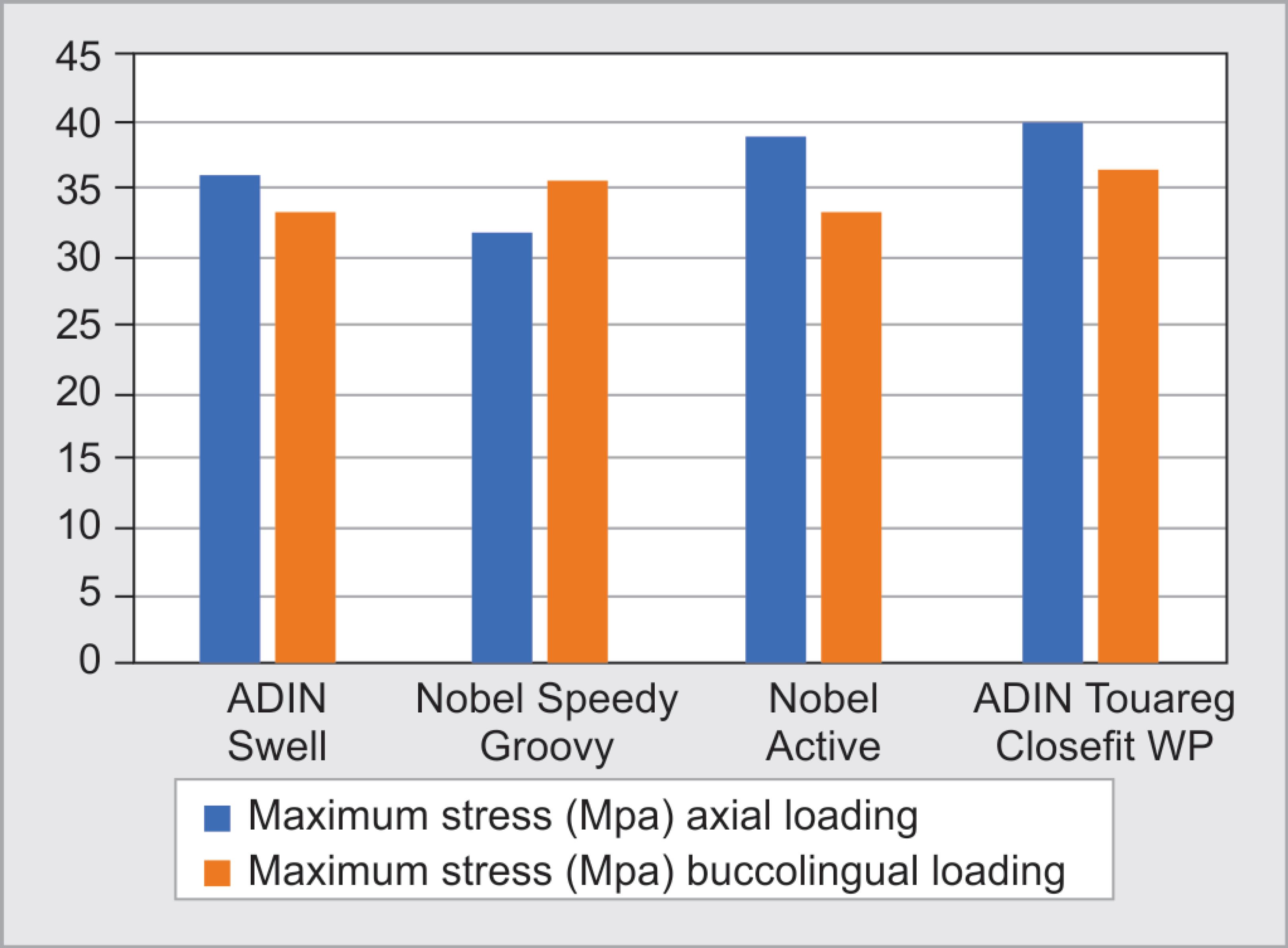 Fig. 6: Evaluation and comparison of stresses on cortical bone with implant systems under different loading conditions

The present study has certain limitations; first, all the vital tissues that are anisotropic were considered isotropic. The loads applied were static but there are always dynamic loads during function. Even though FEA provides a sound theoretical basis, it should not be considered alone for predicting the response of biological systems to applied loads. Actual experimental techniques and clinical trials should follow FEA to establish the influence of observed stress levels on the tissue and prosthesis function.19 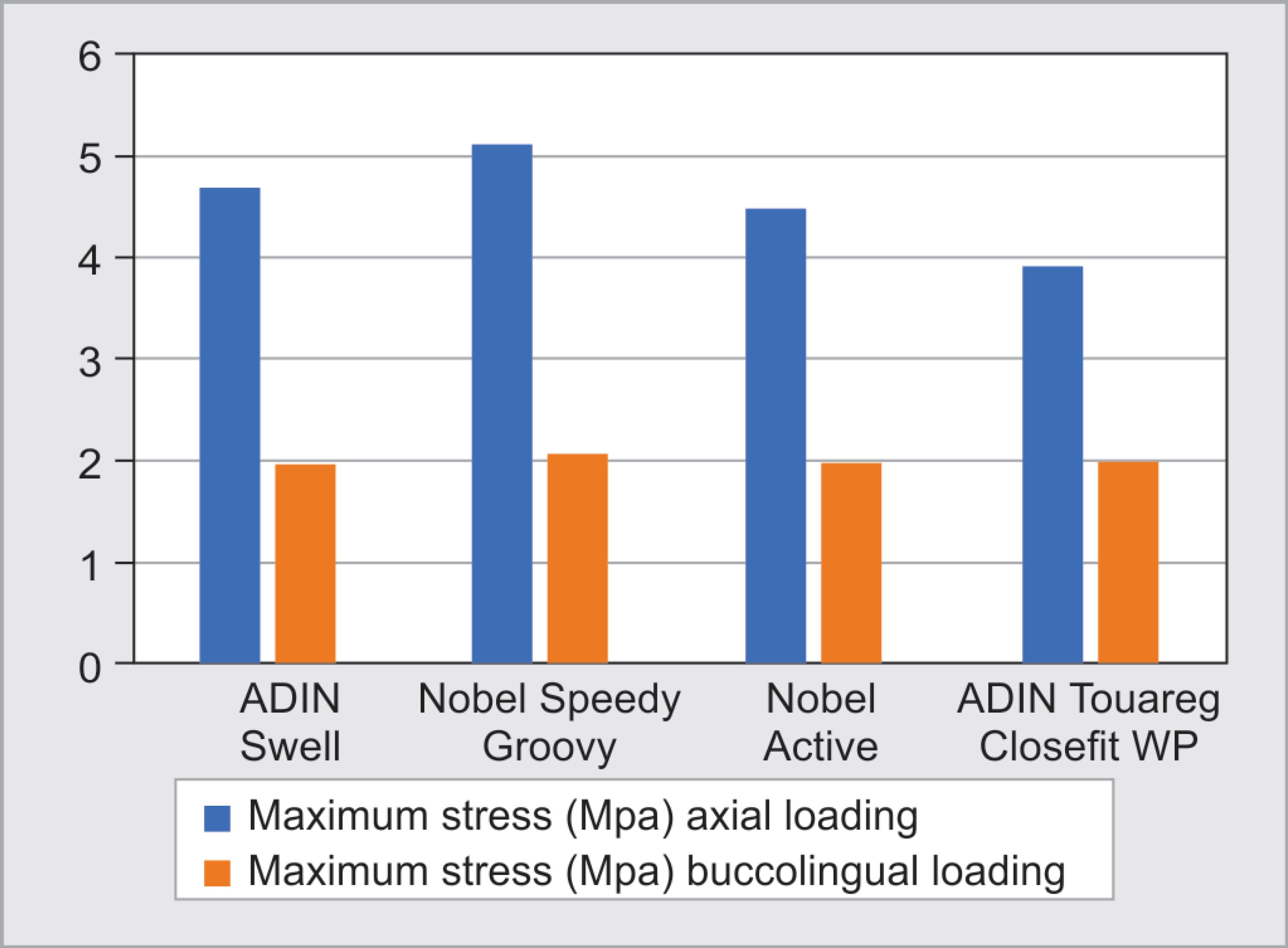 Fig. 7: Evaluation and comparison of stresses on cancellous bone with implant systems under different loading conditions

From the present study, it can be concluded that out of all the implants used for the study, the Nobel Speedy Groovy implant system favored more equitable load distribution due to the platform switch design contrary to the other systems and at the cancellous bone the least load was transferred by the Nobel Active implants due to the reverse buttress thread design and larger thread pitch.