Aim: The present study aimed to evaluate the effect of various root-conditioning agents on root surfaces that are periodontally affected.

Materials and methods: A total of 90 human teeth having single root that were extracted because of chronic periodontitis were chosen. The extracted teeth were cleaned of saliva and blood using a soft-bristled brush and distilled water. The investigational groups were categorized into group I—doxycycline HCl, group II—ethylenediaminetetraacetic acid, and group III—tetracycline HCl. Samples were readied for histological study by scanning electron microscope (SEM). The SEM was used to assess the effectiveness of smear layer removal, amount of patent dentinal tubules out of the totality of dentinal tubules present, and the appreciation of collagen fiber-like structures inside the intertubular area.

Clinical significance: The modification of the root surface of human teeth with the use of root conditioning agents leads to enhanced attachment by connective tissue resulting in improved reconstructive periodontal treatment goals.

Dental calculus and plaque colonization are one among the many periodontal disease determinates. The root surfaces that are diseased do not support cell attachment, and this could be due to adsorption of endotoxins.1

Periodontal diseases lead to loss of attachment and exposure of root surface of the teeth to the oral environment. Uncovered cementum shows many changes such as, deposition of plaque and calculus on the surface, unmineralized or hypermineralized surfaces, contamination with endotoxins and cytotoxin, and absence of collagen cross banding, which cause reduction in viability and cell growth of fibroblasts, thus interrupting the new attachment.2

The key purpose of periodontal therapy is the re-establishment of periodontium which is lost and alteration in root surfaces that are affected periodontally into a substrate that accepts connective tissue and epithelial cell attachment and adherence biologically. This purpose could be achieved by scaling and root planning and denuded root surfaces treatment with a range of antimicrobial agents and chemicals.3 It is not viable to completely disinfect a root surface that is affected by periodontitis solely by mechanical means because the bacterial toxins that are present on root surface do not get eliminated completely and the mechanically disinfected surface will unavoidably get enclosed by a smear layer composed of dental calculus remnants, subgingival plaque, and contaminated cementum. The smear layer acts as a barrier between root surfaces and periodontal tissues, physically, and, as a result, inhibits the new attachment formation.4

In order to promote new attachment, a variety of chemical root-conditioning agents (phosphoric acid, citric acid, doxycycline hydrochloride (HCl), tetracycline HCl, minocycline HCl, ethylenediaminetetraacetic acid (EDTA), fibronectin, sodium deoxycholate, hydrochloric acid, Cohn’s factor, etc.) and physical methods (laser) have been used subsequent to root instrumentation. These agents uncover proteins bound to cementum and dentin collagen and have been found to wash away the remaining toxins adhering the diseased root surfaces.5 Therefore, this study was performed with an aim to evaluate the efficacy of three root-conditioning agents on root surfaces that are periodontally involved.

The present in vitro study was conducted in the Department of Periodontics, Kalinga Institute of Dental Sciences, Bhubaneswar, India. Ninety single-rooted human teeth indicated for extraction due to chronic periodontitis were collected for the present study.

Criteria for Selection of the Teeth

No records of scaling, root planing, and prophylaxis in the past 6 months; no records of swelling or acute pain requiring their extraction; loss of proximal attachment by 5 mm or more; bleeding on gentle probing; and lack of proximal surface caries.

Preparation of the Specimen

The extracted teeth were cleaned of saliva and blood using a soft-bristled brush and distilled water. After cleaning, the root surfaces were carefully root planed using a Gracey curette (no. 1/2). A finishing bur (no. 102R) at a speed of about 400,000 rpm in high-speed hand piece was later used to eliminate the cementum and attain an even and hard surface like a glass. Experimental surface was obtained by removing the crown of each tooth at the level of cementoenamel junction (CEJ), and then a portion of root 5 mm from the CEJ was selected. A double-sided diamond disk mounted in a slow-speed hand piece under continuous and plentiful water irrigation was used to slice the specimen into two equal longitudinal halves along the pulp chamber. A straight bur was used to flatten the pulpal side, and a straight groove was made on the horizontal surface for recognition.

Preparation and Application of Root-conditioning Agents

Based on the type of root-conditioning agent used, the experimental groups were categorized into groups I, II, and III with 30 samples in each group.

A 100 mg/mL solution was prepared by mixing doxycycline HCl powder of 100 mg in 1 mL of sterile water. A pH meter showed a pH of 2.2 for this solution. Completely soaked cotton pellets with doxycycline HCl solution were placed on the root surfaces for the total time of 5 minutes to treat them. The soaked cotton pellets were replaced every 30 seconds.

A tetracycline solution of pH 1.3 was obtained by dissolving a tetracycline HCl capsule of 500 mg in sterile distilled H2O of 5 mL quantity with constant stirring for 10 minutes. Cotton pellets that were completely drenched with tetracycline HCI solution were used to treat the root surfaces for 5 minutes, and these pellets were changed every 30 seconds.

The samples were observed at 1,500× magnification of a SEM (Figs 1 to 3). The micrographs were recorded and were assessed for

0 = No removal or no apparent effect on the smear layer

1 = Greater than no effect, but less than one-half removal

3 = Greater than one-half but less than complete removal

4 = Complete removal of the smear layer with clean and open dentinal tubules. 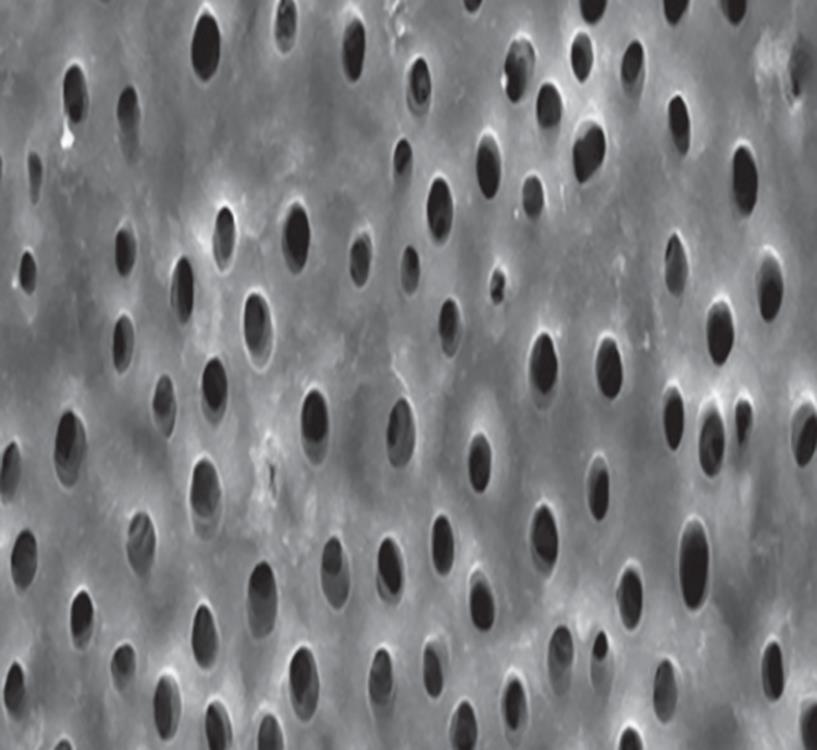 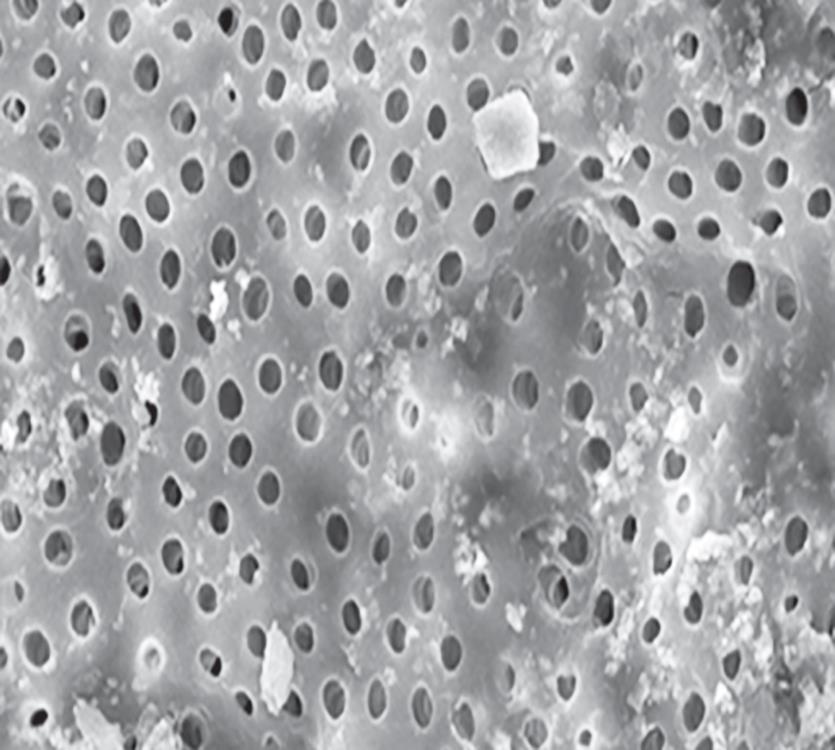 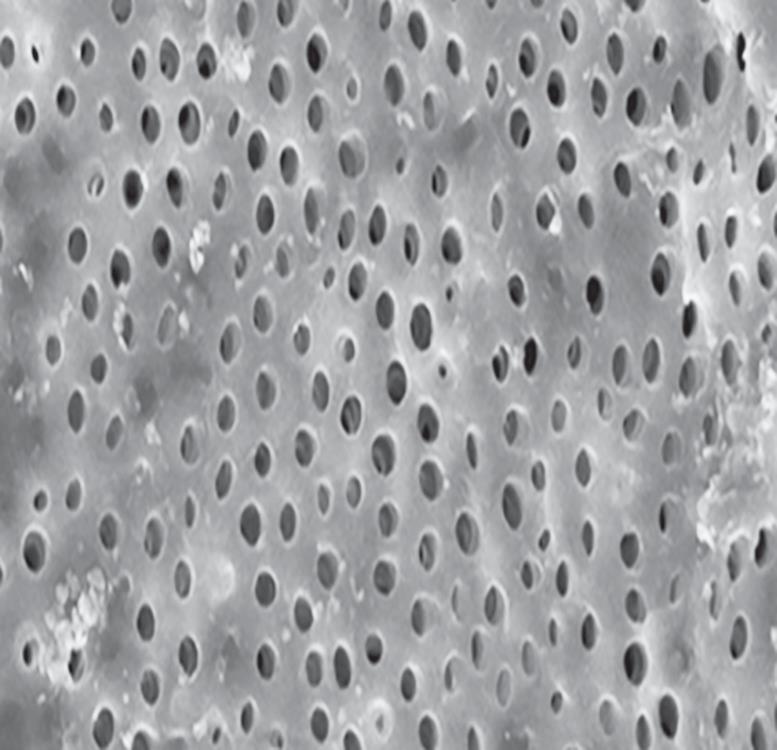 A Statistical Package for Social Sciences (SPSS) version 20 (SPSS Inc.Chicago, IL, USA) was used to analyze the collected data. The arithmetic mean and the standard deviations were used to perform the analysis. Comparison between groups was done using Student’s unpaired t test. A p value of <0.05 was considered as statistically significant.

On intergroup comparison of the mean efficacy of smear layer removal, a statistically significant difference (p value < 0.001) was noted between groups I and III and groups II and III as displayed in Table 2.

The intergroup comparison of presence of mean number of patent dentinal tubules in all the three groups were found to be statistically significant (p value < 0.001) between groups I and III as displayed in Table 4.

A statistically significant difference (p value < 0.001) was found between groups I and II, Groups I and III and groups II and III for the mean appreciation of collagen-like structures on inter-group comparison and is as displayed in Table 6.

The acidic solutions that are applied topically and used for root surface conditioning have been shown to eliminate smear layer of root instrumentation and residual contaminants on root surface. Root surface demineralization by root-conditioning agents have been associated with exposure and expansion of the dentinal tubules with dentin collagen exposure, thus providing an environment that aids in migration and division of cells involved in healing of periodontal wounds ensuing in increased attachment of connective tissue cells on to the root surfaces.7,8

In the present study, each root conditioner was applied passively using cotton pellets that were completely soaked with the conditioning agent for a total period of 5 minutes with the cotton pellet being changed every 30 seconds. The “Passive Burnishing Technique” for root conditioner application has been chosen over burnishing technique because the method of burnishing may result in development of smear layer that completely or partially occludes the dentinal tubule openings. The cotton pellets were changed every 30 seconds to maintain a continuous stable dose of application of root conditioner. This procedure has been suggested to boost a mechanical/chemical act that would chemically loosen surface debris and inorganic material, thus exposing subsurface dentin to demineralizing role of fresh acid.9

The mean total number of tubules was found to be highest in tetracycline HCl-treated samples followed next by EDTA-treated samples and doxycycline. The findings by Lafferty et al.11 showed comparable surface characteristics with tetracycline HCl conditioning when applied on human root surfaces affected by periodontal diseases. This could be due to more acidic pH of tetracycline HCl (pH 1.6) compared to less acidic pH of doxycycline (pH 2.2) which causes exposure of comparable and substantial number of dentinal tubules compared to the other agents. These findings are similar to those obtained by Shetty et al.12 and Madison et al.6

The highest number of patent tubules was seen in tetracycline-treated samples than EDTA and doxycycline. Of the three agents used, doxycycline-treated samples had the least number of patent tubules. These findings are in accordance with previous studies by Madison et al.6 and Ashok et al.13 This finding is unlike the findings by Garg et al.14 This could be ascribed to the fact that tetracycline have an increased substantivity on dentine surface.

The tetracycline use has been related to improve adhesion between dentin and glycoprotein; stimulation, adhesion, and increased number of fibroblasts; inhibition of osteoclast and neutrophil function; anticollagenase activity; and efficacious substantively. In our study, tetracycline HCl-treated samples demonstrated favorable results for all the parameters that were evaluated.15

In this study, the effectiveness of root-conditioning agents was assessed using a histological method of evaluation—the SEM. As all the analysis was dependent on the SEM, the present study used improved resolution, enhanced magnification along the interface, and better field depth. The possible usefulness of tetracycline on dentine has been demonstrated by an in vitro study of Terranova et al.3 Numerous studies including tetracycline have demonstrated its several effective properties such as superior anti-collagenase activity, improved growth and attachment of gingival fibroblasts, increased substantivity, and inhibition of parathyroid hormone that leads to bone resorption. A significant difference in mean number of patent dentinal tubules has been recorded for all three experimental groups.

In the present study, all the three experimental groups showed root-conditioning agents to be helpful in smear layer removal, dentinal tubule exposure, and appreciation of collagen fiber-like structures in vitro. However, the result of this study is restricted to physical finding of changes in root surface and does not demonstrate differences in an in vivo condition that may originate from the physiologic effect of these root-conditioning agents, and this is the limitation of the present study. Variables such as disease condition of the dentine specimens, type of demineralizing agent, or a combination of such variables accounts for dissimilarity between present study results and results of other studies. Additional studies have to be conducted in the future after considering other confounding factors.