Comparative Evaluation of Stress Distribution around Various Threaded Implants with and without Platform Switch: A 3-D Finite Element Analysis

Aim: The purpose of this study was to compare the stress distribution around various thread design implants with or without platform switching in the maxillary posterior region.

Materials and methods: Stress-based performances of four different thread design implants (single, double, triple, and asymmetric thread design each with or without platform switching) were analyzed by the three-dimensional finite element method under a static load of 100 N at 15° oblique direction buccolingually at the central portion of the abutment. A geometric model of the posterior maxillary segment (first molar region) with an implant and abutment was modeled using the CATIA V5R19 software. Type IV bone quality was approximated and complete osseous integration was assumed.

Conclusion: Implant surface design, platform switching, and site of placement affect load transmission mechanisms. Due to low crestal resorption, single thread design with platform switching is preferred. The success of an implant in the maxillary molar region is more challenging in terms of the density of bone and the worst load transfer mechanism. With the right kind of implant surface design selection, this can be reduced to a great extent by the preservation of crest of the ridge.

Clinical significance: Crestal bone resorption following implant placement is an important issue. An optimum implant design with a single thread having a platform switch could compensate for this issue to a great extent.

The continuous research in the field of dental implants has made them survivable and predictable.1–4 It can be attributed to modifications in implant design, materials, and surgical techniques.5 The incidence of dental implant failures is still a concern, particularly in the maxillary posterior region.1,6–15 Osseointegration failure in this region can be ascribed to poor oral health along with biomechanical factors like dental implant and quality of surrounding bone.1,16–23 Implant design favoring optimum dissipation force at the implant–bone junction is essential to make them predictable in the maxillary posterior region.

The thread of the implant is an important biomechanical factor that maximizes initial contact, improve initial stability, enlarge implant surface area, and favor dissipation of interfacial stress.24,25 Based on thread helix, single-thread, double-thread, triple-thread, and asymmetric thread type implants are available commercially.26,27 The double- and triple-threaded implants are presumed to thread faster into the osteotomy site and are primarily indicated in type IV cancellous bone.26,27 Asymmetric implants with micro threads in the coronal portion of the implant have been claimed to reduce marginal bone loss, maintain peri-implant soft tissues and increase the bone implant contact (BIC).25,28–30 However some studies defy this.31

Crestal bone loss due to high stress and strain in cortical bone, are further reduced when a narrow-diameter abutment with a wider-shift implant collar is used—a concept called platform switching.32–34 This relocates the implant–abutment junction toward the central axis.35 So stress distribution shifts from compact to the spongy bone under oblique load.36 The hemogeneous distribution of force along the length of the implant decreases the mean crestal bone loss to around 0.22 mm.37,38

Apart from implant design, bone quality has a vital role to play in the success of implant therapy.39 The literature suggests that only 3% of Brånemark System implants (Nobel Biocare, Göteborg, Sweden) placed in type I, II, and III bone were lost after 5 years, while in type IV bone, failure rates were 35% over the same period.40 This can be attributed to the small implant-to-bone contact area and the inferior bone quality.41 The posterior region of the maxilla is mostly made up of type IV bone.32,42,43 So implant design favoring optimum dissipation of force along the implant–abutment interface is required in this region for clinical success.44–47

The stress analysis of implant–bone mechanical interactions, around various thread design (single, double, triple, and asymmetric threaded) implants with or without platform switching, in the maxillary posterior region, can suggest the ideal implant design.48,49 This is better done with the finite element analysis (FEA), owing to the complex geometry of the bone-implant biomechanical system.50,51 The FEA is a numerical tool that analyzes very complex and irregular structures. It breaks the complex structures into many small simple interrelated blocks or elements using a mathematical technique. Hence, the stress and deflection of all parts of the structure are calculated precisely.52,53

The purpose of this three-dimensional (3-D) FEA study was to assess and compare the effect of various thread design (single, double, triple, and asymmetric threaded) implants with or without platform switching on stress on cortical bone and overall displacement of the implant–abutment complex in the maxillary posterior region. This will help in the selection of a proper design implant for the maxillary posterior region.

This observational descriptive research using a 3-D FEA was conducted in the Department of Prosthodontics, Institute of Dental Sciences and ITER, SOAU, Bhubaneswar, Odisha. For this study, eight 3-D geometric models were generated using the CATIA V5R19 software. A computer with a 19 inch widescreen monitor, 8 GB RAM, Intel 5 (i5) processor along with memory capacity of 1 TB hard disk was used for the purpose. Each model comprised an implant, abutment, and bone block. For standardization, parameters of all the models were kept identical except for the implant thread design. Data for the models were adapted from the literature.

Four different thread design single-piece implants (single, double, triple, and asymmetric thread), each with and without platform switching (n = 8), were used for the purpose (Figs 1 to 4). Single-piece implants were preferred for their simple design and better dissipation of force along with the fixture.54 Short- and wide-diameter implants, each having 7 mm length and 5 mm diameter, were used.55 The thread dimensions of implants used for the models are given in the tabular form (Table 1).56–59 All the abutments were having a height of 4 mm and 3-degree taper all around from the vertical axis.56–59 Data for implant models were taken from the Nobel Biocare catalog.

Once 3-D geometric models were created with CATIA V5R19 software (solidwork; Avions Marcel Dassault, France), they were exported to FEA software ANSYS (ANSYS 13.0, ANSYS Inc., Houston, TX, USA). Here, these models were meshed with Hypermesh v11.0 (ANSYS version 13 software), using 10-node tetrahedral elements, to generate the 3-D FEA models. Each node was assigned 4° of freedom. Care was taken to ensure that meshes on adjacent patches are compatible so that no node was isolated. The modulus of elasticity and Poisson’s ratio of each material were specified concerning their location in the finite element models. Elastic properties of various materials were adopted from the literature and the materials of all models were presumed to be isotropic, homogeneous, and linearly elastic (Table 2).62

In this study, the interface between the implant and bone in FEA models was assumed to be an immovable junction, indicating 100% osseointegration between the implant and the bone.54 This is also supported by Papavasiliou et al. who observed that different degrees of osseointegration do not affect the stress level or distribution of axial or oblique load.63 An oblique load of 100 N was applied in the buccopalatal direction, at the mid-center of the abutment of the one-piece implant system. It was at an angle of 15 degrees to the vertical.55 For loading, an oblique force was chosen, as it is more realistic during chewing and will result in localized stress in cortical bone.32

For 3-D FEA, descriptive statistics were computed to compare the results of von Mises stress distribution and total displacement between different thread design implants (single, double, triple, and asymmetric thread), each with and without platform switching.

Stress generated in the cortical bone (von Mises equivalent stress—MPa), around the various thread design implants each with or without platform switching, and the total displacement (micro-movement) were computed using the ANSYS version 13 software program. Stress distribution in the FE model is normally expressed in numerical values corresponding to the particular color coding. Algebraic maximum and minimum values of von Mises stresses are denoted by red and blue colors, respectively. The intermediate values are represented in the form of bluish-green, green, greenish-yellow, and yellowish red in the increasing order. 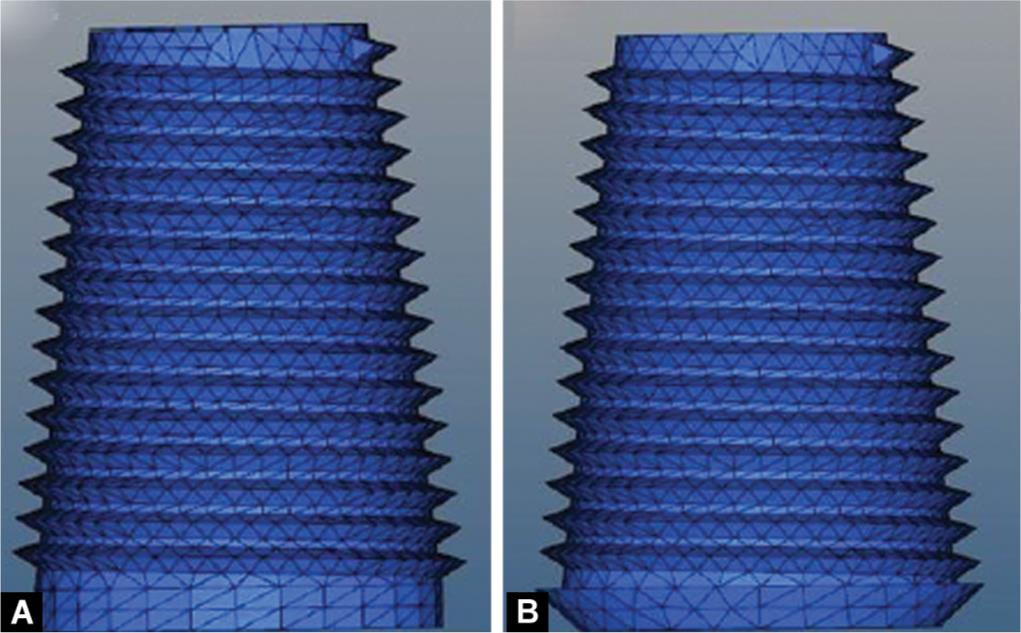 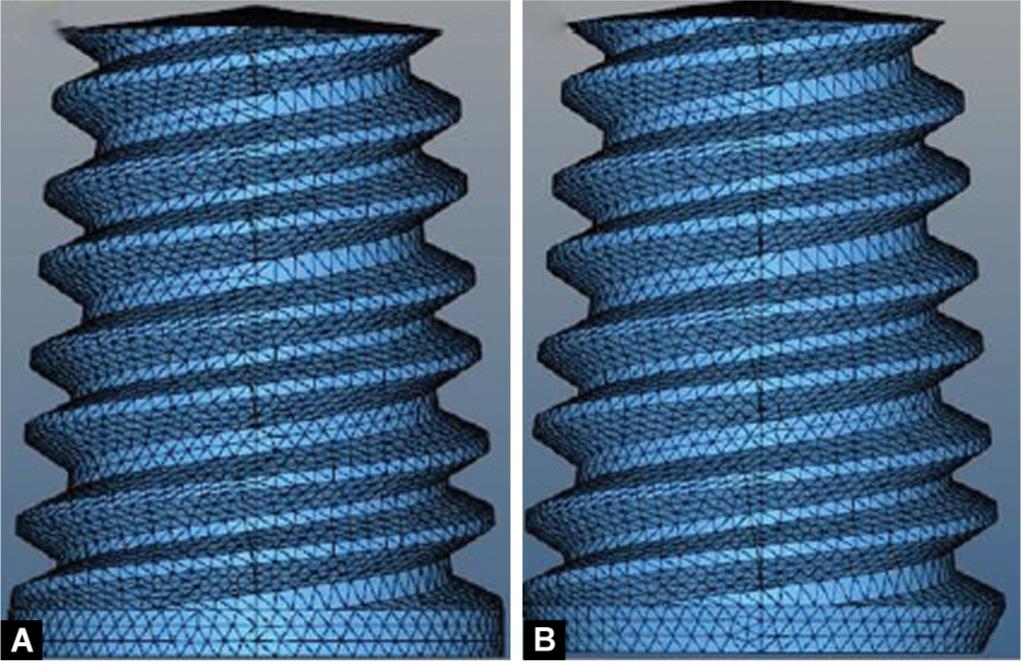 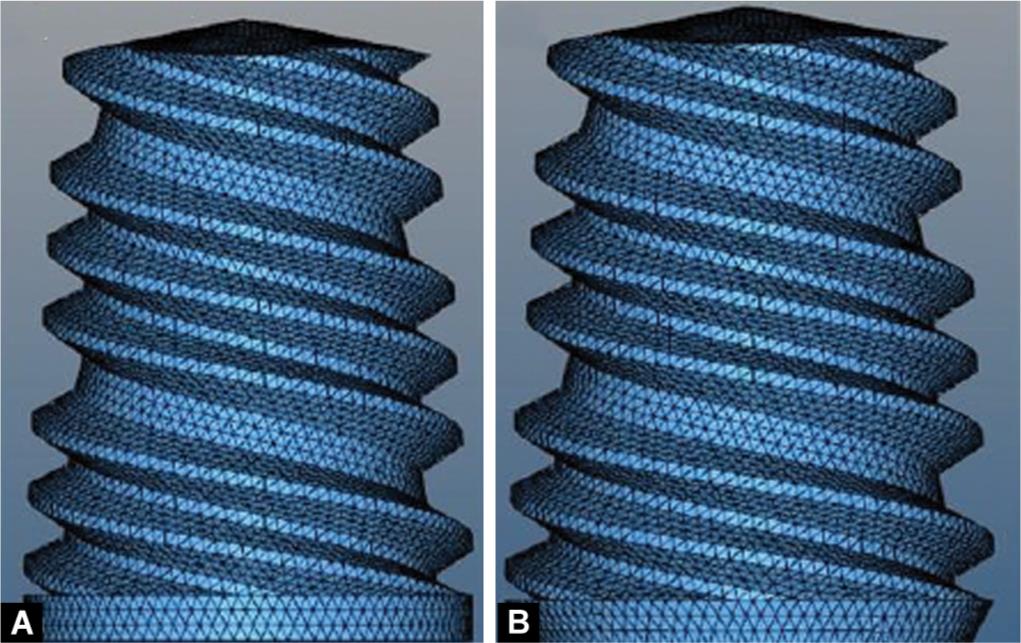 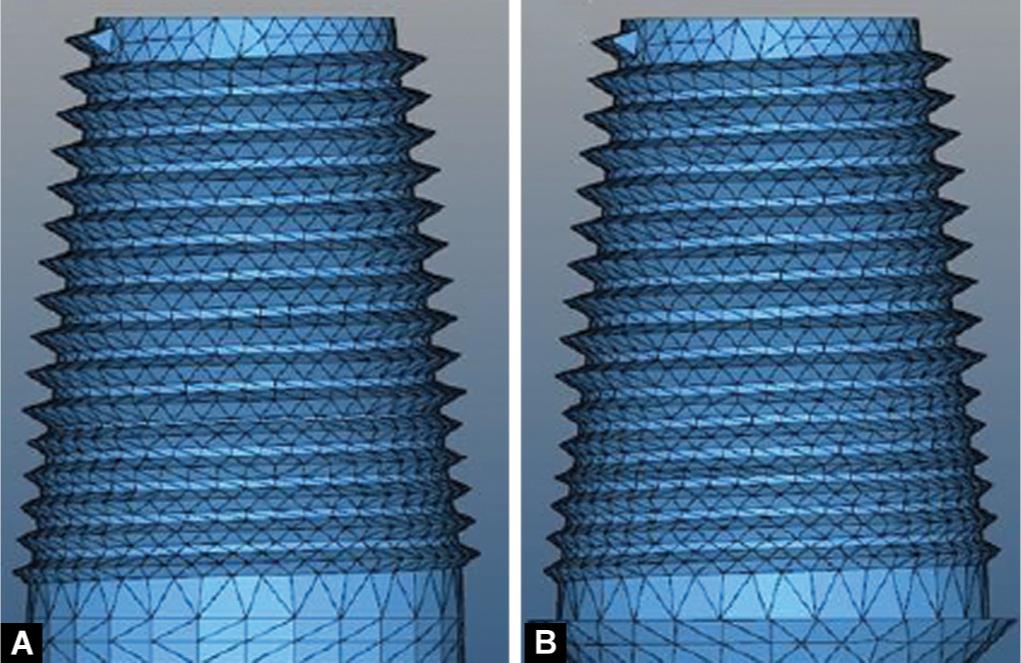 Stress distribution around the platform-switched, single-threaded implant is expressed in the form of colored patterns as shown in the figure (Fig. 5). Similar stress patterns were also found for the double-thread, triple-thread, and asymmetric thread implants with and without platform switching. The stress values obtained for all the implant designs were tabulated and compared in the following manner (Tables 3 and 4).

Out of four different thread designs, maximum von Mises stress was produced by the double-threaded implant (19.9–21.6 MPa), whereas single-threaded implant produced minimum von Mises stress (15.4–16.2 MPa) in the cortical plate. Again, implants with platform switching exert less stress (15.4–19.9 MPa) in the cortical bone around the implant than without platform switching.

In comparison to the double, triple, and asymmetric thread variety implants, minimum overall displacement was seen in a single-threaded implant with and without platform switching (0.011664–0.008524 mm). On the contrary, implants with platform switching showed more overall displacement (0.011664–0.013129 mm) in the surrounding bone.31 After analyzing the results, it can be presumed that out of all different implant designs, a single-threaded implant favors better stress distribution and minimum stress to the cortical bone around the implant. It also has a minimum overall displacement among all different designs.

In the present study, the 3-D FEA method is used to assess the effect of various thread design (single, double, triple, and asymmetric threaded) implants with or without platform switching on cortical bone stress and overall displacement of the implant–abutment complex in the maxillary posterior region.

Crestal bone loss is an important factor determining the long-term prognosis of the implant. This can be prevented when vertical bone loss around an implant is not exceeded by 2 mm for the first year and remain less than 0.2 mm annually. This will preserve the biologic width around the implant.64 The result of the study showed that maximum von Mises stress in the cortical plate was produced by the double-threaded implant, whereas minimum stress was produced by the single-threaded implant variety. This finding is in agreement with the study by Sun et al., who stated that the best stress transmission is shown by a single-threaded implant in comparison to other thread patterns.26

One of the limitations of this study is the use of a single-piece implant to overcome the complexity of implant internal design modeling in two-piece implants. Again, the geometry of the bone model was not only simplified but also assumed to be isotropic and homogeneous for the simulated structure. Despite similar strength of the bone block to that of the jaw bone, the strain patterns might vary with the bone geometry. This could also have created a small margin of errors in results.54 Further, the properties of leaving tissue in an actual biological system might not be isotropic and hemogeneous, which needs to be studied further.55 Although oblique loading has been suggested to symbolize a realistic occlusal load, chewing movement, specifically with dynamic loading simulations, needs to be considered in future investigations.50 Each individual has a unique biological condition in terms of bone quality, force distribution, and masticatory activity. So, the results of the study need to be further substantiated by randomized clinical trials for clinical application.64

Within the limitations of the 3-D FEA study, it can be concluded that implants can be successfully placed in the maxillary posterior region. Cortical stress concentration in D4 bone is more for the asymmetric implant in comparison to the single-threaded implant, whereas stresses are less in comparison to double- and triple-threaded designs. Again, implants with platform switching exert less stress in the cortical bone around the implant than without platform switching. A single-threaded implant with platform switching showed even distribution of stress and is the suitable design out of four different designs of implants for the maxillary posterior region.