Materials and methods: Seventy female subjects [140 temporomandibular joints (TMJs)] were divided into two groups. Group I included 35 subjects with normal facial profiles (NFPs) in which the soft tissue glabella, subnasal point, and the soft tissue chin are almost in the same straight line, while the 35 subjects in group II had abnormal facial profiles (AFPs) in which the same imaginary line is either convex or concave indicating variation from standard norms. Three-dimensional volume analyses were performed on CBCT images by digitizing all landmarks in three orthogonal planes to measure the dimensional and positional parameters of the condyle and GF. Then the Pearson’s correlation coefficient was used to identify associations between different condyle and GF parameters.

Results: Sagittal condylar surface area was significantly associated with all dimensional parameters of the GF (GF height, width, and surface area, condylar width, and the GF width and between the axial and coronal condylar surface area with GF height and GF width) on the right and left sides of both groups (p values ranging from 0.000 to 0.028). Positional associations were detected between the anteroposterior and mediolateral GF positions and the corresponding position of the mandibular condyles and between the anteroposterior condylar position and the vertical GF position on both sides of both groups (p values ranged from 0.000 to 0.015).

Conclusion: There is a strong association between the mandibular condyle and GF in both positional and dimensional measurements in patients with normal and abnormal facial profiles.

Clinical significance: Understanding the associations between the mandibular condyle and GF facilitates optimization of the treatment outcomes by increasing occlusal harmony and stability after orthodontic treatment, orthognathic surgery, or any prosthetic replacement.

The temporomandibular joint (TMJ) is one of the most important and complex structures in the maxillofacial region. It is composed of the mandibular condyle, glenoid fossa (GF) (mandibular fossa), articular tubercle, disc, masticatory muscles, and ligaments. The TMJ plays an important role in mandibular movement, occlusion harmony, and stable outcome after orthodontic procedures, orthognathic surgery, or any prosthetic replacement (fixed or removable prosthesis including dental implant).1–5 Moreover, any changes in TMJ morphology or its structural position can cause temporomandibular disorders (TMDs).6 Hence, a thorough understanding of the morphology, position, and associations between different TMJ structures will facilitate optimizing treatment outcomes.

Many imaging modalities have been used to evaluate the morphological and positional structures of soft and hard TMJ structures including conventional radiography, magnetic resonance imaging (MRI), multidetector computed tomography (MDCT), and cone-beam computed tomography (CBCT).7,8 Among them, MRI is considered the best imaging modality to assess the soft tissue structures of the TMJ,7,8 while MDCT and CBCT are used to precisely evaluate the hard tissue structures.9,10 However, CBCT’s low radiation dose and high spatial resolution render it the imaging modality of choice to assess TMJ hard structures.11

Many studies have investigated the morphology and position of different TMJ structures, while other research focused on dimensional and positional differences according to age and ethnic groups.12–16 Moreover, other studies have searched for associations between the mandibular condyle, GF, and TMDs; they found associations between morphological and positional changes to the mandibular condyle, GF, and TMDs.15,17,18 On the other hand, other studies found that differences in the dimensions and positions of the condylar head and GF correlated with skeletal class and vertical facial proportion.19,20

The sample size was calculated using the G*Power 3.0.10 software. The mean and standard deviation (SD) of Cl I and Cl II sagittal surface area measurements [29.82 (7.78) and 40.96 (15.6 mm2), respectively] from Alhammadi et al.20 were used to calculate the necessary sample size. Adopting a two-sided confidence level of 95%, power of 90%, and a ratio of 1:1 for the patients with normal and abnormal facial profiles indicated that the minimum required sample for each group was 27 subjects.

Seventy female subjects (140 TMJs) were selected from the CBCT database of the institute for this study between November 2018 and May 2019. The sample was divided into two groups according to the facial profile. Group I: 35 subjects with normal facial profiles (GI: NFP) in which the soft tissue glabella, subnasal point, and the soft tissue chin are almost in the same straight line; and group II: 35 subjects with abnormal facial profiles (GII: AFP) in which the same imaginary line is either convex or concave indicating variation from standard norms. Subjects displaying a convex or concave line were considered an abnormal facial profile and included in the study sample. Subjects were included in the present study if they fulfilled the following criteria: (1) aged between 18 and 25 years; (2) at least 20 remaining teeth with occlusal posterior stopper; (3) no history or signs of TMDs; (4) no history of serious disease, trauma, or operation in the craniofacial region; (5) no history of TMJ surgery and/or trauma; (6) no history of systemic diseases that could affect bone such as rheumatoid arthritis; (7) no history of medications that may affect the TMJ; and (8) no history of growth abnormalities. Additionally, all selected subjects had high-quality CBCT images. The selected sample was checked for the fulfillment of all criteria using the CBCT images and the R4 database, which contains the medical history, clinical examination results, and treatment procedures performed for all patients from the institute’s outpatient clinics.

All subjects were scanned using the 3D Accuitomo 170 (MORITA, Japan) using the same parameters: field of view 170 × 120 mm, 90 kV, 5–8 mA, 17.5 second exposure time, and voxel size 0.25 mm. The DICOM files from all subjects were reviewed using the Invivo Dental software, version 5.02 (Anatomage, San Jose, CA, USA). One oral and maxillofacial radiologist with 12 years of professional experience evaluated the CBCT images. Before starting the image analysis, intraexaminer reliability was conducted on 20 TMJs with a 2-week interval between the first and second analyzes. To determine the interexaminer reliability, an orthodontist with 10 years of professional experience in CBCT-based TMJ measurement evaluated 20 images and the results from both examiners were compared.

The image analysis was adopted from the 3-D analysis described by Alhammadi et al.20,24 and involved digitizing the different anatomical landmarks included in the analysis on the 3-D volume using slice allocators on the 2-D planes (sagittal, coronal, and axial) (Table 1 and Fig. 1). Three reference planes were used to take the positional measurements:

The following positional measurements were acquired; these measurements were selected as they provide 3-D comprehensive evaluations about the exact position of GF and mandibular condyles, which are affected by growth determinants in the craniofacial region:

The following dimensional measurements were recorded; these measurements were selected as they provide 3-D comprehensive evaluations about the exact dimensions of GF and mandibular condyles in the three planes, height, width, and length as well as surface area, which are changeable dimensions during craniofacial growth:

The raw data were imported into SPSS for Windows, version 20 (IBM, Armonk, NY, USA). The data were presented as mean and SD for each group. An independent t-test was used to compare the two groups (i.e., NFP vs. AFP). Significant positional and dimensional associations between the measurements of the condyle and GF were identified using the Pearson’s correlation coefficient test. The inter- and intraexaminer reliabilities were assessed using the interclass correlation coefficient (ICC) test. A p value below 0.05 was considered statistically significant. 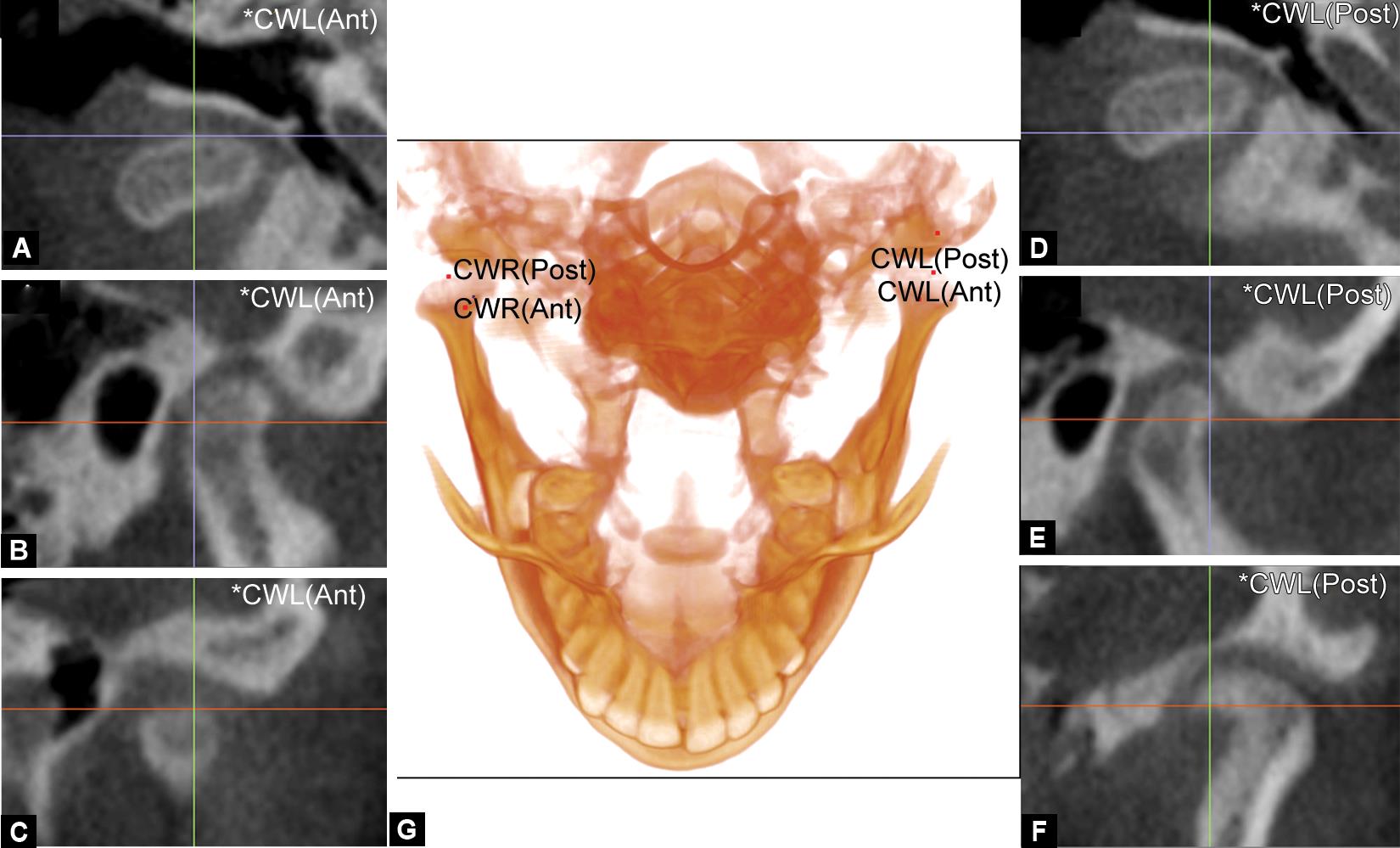 This comprehensive analysis revealed strong associations between the mandibular condyle and GF in most dimensional (height, width, length, and surface areas) and positional measurements (in anteroposterior, vertical, and mediolateral positions) of both patient groups, which might indicate mutual effect during craniofacial growth.

The side-based characteristics of the GF and the mandibular condyle tended to differ significantly between the two groups except for the mediolateral fossa and condylar positions, GFH, CCSA, and the anteroposterior joint condylar position. These findings are consistent with Alhammadi et al.20 who reported significant differences between normal (skeletal class I) and abnormal (skeletal class II and III) groups in GFW, GFSA, and all condylar dimensions. Moreover, a study conducted on different vertical facial patterns found significant differences between the average, short, and long face groups in two-dimensional parameters of the GF (GFW and GFSA) and most of the dimensional and positional parameters of the mandibular condyle.19 These differences are likely explained by the distinct pattern of craniofacial growth in the three types of skeletons, more horizontal growth in class III and more vertical growth in class II relative to class I skeletons.

Although this detailed dimensional association was not addressed before, other studies have reported similar findings. Ribeiro et al.15 assessed the geometry of the mandibular condyle and GF from different views and found that the distribution of condyle and fossa shapes favored a rounded shape in the lateral (57 and 66%, respectively) and posterior (53 and 83%, respectively) views. These geometry findings suggest strong and moderate associations between the lateral and posterior views, respectively. Although significant differences were detected between the NFP and AFP groups in most of the parameters, the positional and dimensional relationship between the mandibular condyle and GF could be ascribed to their strong association during growth periods, reflected in their positional and dimensional relativity.

Regarding positional associations, it was found between GFAP and GFML with its corresponding positions of the mandibular condyles and between the CAP and GFV within the craniofacial complex. This is potentially dictated by the direction of condylar growth, which grows downward, forward, and laterally resulting in increased vertical rami height and intercondylar distance.27 Subsequently, the GF follows the direction of these growth patterns, thus maintaining its 3-D relationship to the condylar fossa.

A common dimensional association was found between the CW and the GFSA and another positional association between the CV and GFV. Ejima et al.17 found a significant correlation between the GF’s roof thickness and sagittal condylar morphology. The association between the vertical condylar and GF positions was mostly due to the vertical load distribution during typical function, as reported by Tsuruta et al.28 and Maeda et al.29 who analyzed factors influencing stress distribution in the condyle region, and observed that morphological changes in the condylar head and the roof of the GF altered the stress distribution. Moreover, associations among these parameters were detected either in the NFP or AFP group, which might be due to the effect of different growth patterns on each group on the measured parameters.

In addition to its strengths, the present study also has some limitations. Despite being calculated in advance, the sample size should be larger with more subgrouping based on the anteroposterior (convex or concave) and vertical growth pattern (vertical or horizontal) in any future research. Another limitation is the cross-sectional study design; future studies should be longitudinal to enable determining whether the associations identified in the present study are maintained through different developmental stages and how these can be used to provide proper patient care decisions.

Based on the result of this study, it could be concluded that a great association between mandibular condyle and GF in both positional and dimensional measurements was found in the NFP and AFP groups with the highest association being between SCSA and all dimensional GF parameters. Further studies are warranted that take into consideration the limitations of the current study.

Ethical approval was obtained for this internship project from the Scientific Research Committee of the College of Dentistry, Jazan University (Reference No.: CODJU-18061).

I am very thankful to Dr Maged S. Alhammadi for his help with the interexaminer reliability assessment.