Comparative Evaluation of Bactericidal Effect of Silver Nanoparticle in Combination with Nd-YAG Laser against Enterococcus faecalis: An In Vitro Study

Results: The optical density and turbidity of groups I and II began to decrease in 2 hours in comparison with the control. There was a significant difference in mean optical density among the three groups after 1½ hours onward. The study also demonstrated the minimal bactericidal concentration (MBC) as 100 μg/mL of Ag nanoparticles with a size of 15 nm were effective against E. faecalis.

Conclusion: The study concluded that silver nanoparticles individually and in conjunction with Nd:YAG laser irradiation would be an effective protocol against E. faecalis.

Clinical significance: The combined effect of silver nanoparticles and laser disinfection against E. faecalis holds a promising treatment modality for eradicating resistant pathogens and biofilms embedded deep inside the dentinal tubules that are not amenable to conventional disinfection protocols in root canals.

Success of endodontic treatment depends on complete debridement and disinfection of the root canal space.1 Despite the use of many irrigants and intracanal medicaments, certain microbial species do survive and cause persistent infections.2Enterococcus faecalis has long been implicated in persistent root canal infections and posttreatment periapical diseases.3,4

New strategies for disinfection of the root canal system are being explored, of which the field of nanotechnology has gained significant attention in endodontics. Nanoparticles display unique and indispensable properties, representing an important class of material in the development of novel devices that can be used in field of endodontics, of which silver nanoparticles gaining popularity due to their strong bactericidal effects on many species of bacteria but have low toxicity toward human cells.5,6 Among the devices developed to aid in endodontics, lasers are the most sophisticated and effective. Nd:YAG (1,064 nm) lasers are gaining popularity and are widely being used in endodontics for disinfection. The antimicrobial effect of the Nd:YAG laser is mainly because of heating of the bacterial environment, resulting in increased temperature inside bacteria cell (through chromophores inside bacteria, which is sensitive to the laser light). The advantage of the Nd:YAG laser in root canal disinfection is its significant bactericidal effectiveness up to 1 mm into the dentine.7

Hence by combining these two approaches, the bactericidal effect of both silver nanoparticles and laser will enhance the root canal disinfection. This study is a preliminary step toward developing integrated nanomedicine, which combines nanotherapeutics with laser technology for treating endodontic infections in future.

Transmission electron microscopy (Hitachi HF-2000) was used for estimation of crystalline structure, mean size, and morphology with a resolution of 2–3 Å. Transmission electron micrograph of silver nanoparticles suspension at 30,000× magnification demonstrated agglomerated clusters and individually dispersed particles of spherical shape with an average diameter of 15 ± 0.3 nm (Fig. 1A).

Enterococcus faecalis (ATCC 29212) culture was streaked in sheep blood agar to check for its purity. The culture inoculated plate was incubated at 37°C for 24 hours. After incubation gram’s staining was done for the colonies, which showed gram+ve cocci in short chains. The plates were stored at 4°C under refrigeration till use. Followed by which the brain heart infusion (BHI) broth was prepared as per the manufacturer’s recommendation. The flask was closed and was stored at 4°C till use.

The isolated colonies of E. faecalis were collected using a sterile loop and suspended in the BHI broth in a centrifugation tube and mixed. It was harvested by centrifugation at 7,000 rpm for 4 minutes to obtain bacterial pellet. The pellet was again resuspended in the BHI broth to make a volume of approximately 10 mL. The bacterial pellet was dispersed by vortexing. Cell numbers were measured in a spectrophotometer in 1 mL cuvettes (666 nm, 0.1 mL optical density equals approximately 108 cells/mL). Serial dilutions were prepared by taking 1 mL solution containing 108 cells and diluted in 9 mL of sterile distilled water and the tube was marked as 10−1. The solution was thus serially diluted to a concentration of 10−7 dilution. The 10−4 dilution of the suspension was taken for further bacteriological study.

Aliquots of the bacterial culture were taken in three test tubes, each measuring 2 mL. The groups were designated as follows:

Group I: 2 mL of culture to which 2 mL of silver nanoparticle suspension was added to make a volume of 4 mL.

Group II: 2 mL of culture to which 2 mL of silver nanoparticles was added to make a volume of 4 mL, which was to be irradiated.

Group III: 2 mL of bacterial culture served as a control.

All the groups were kept in a rotor for binding; two samples were taken from each group and optical density as a function of time was measured periodically at half an hour intervals in a spectrophotometer in a 96-well plate.

Approximately after 2 hours, 2 mL solution from group II (silver nanoparticles + E. faecalis suspension) was pipetted and dispensed in an Eppendorf tube. The sample was irradiated by Nd:YAG laser (Fotana Fiddiles Plus) with the energy settings, 100 millijoules of current at a frequency of 15 Hz, an output power of 1.5 W. A fiber tip with a diameter of 200 nm was inserted into the solution. A spiral movement of optical fiber from the bottom to the top was performed manually to deliver the laser into the sample at six cycles with a time interval of 3 seconds between each cycle.

All the groups were serially diluted. The 10−3 and 10−4 dilutions from the three groups were taken and 100 μL was spread using a sterile loop in trypticase soy agar plates. All the samples that were incubated for 24 hours and the colony count was evaluated after 24 hours.

Data collected were statistically analyzed using one-way ANOVA. It was observed that initially there was an enhanced turbidity in all the three groups with increased absorption values (Table 1). The optical density and turbidity of groups I and II began to decrease in 2 hours in comparison with the control. It was assumed that this might be the time taken by the silver nanoparticles to bind to the bacterial cell and initiation of bactericidal activity. The results of the present study indicate AgNPs alone and in combination with Nd-YAG were effective when compared to the control group. There was a significant difference in mean optical density among the three groups after 1½ hour onward. The optical density of group III (control—bacterial culture) was significantly higher than other two groups (Table 2 and Fig. 2). This study also demonstrated the minimal bactericidal concentration (MBC) as 100 μg/mL of Ag nanoparticles with a size of 15 nm was effective against E. faecalis.

For transmission electron microscopic analysis, a drop of the suspension was placed on the carbon-coated copper grids and dried. Group I was evaluated for binding of nanoparticle with bacteria approximately after 2 hours, which showed bacteria were surrounded by large number of silver nanoparticles and nanoparticles were adhering to the cell surface and few particles were also present in the cytoplasm (Fig. 1B). Transmission electron microscopic observation of group II showed fragmentation of the cytoplasm and plasma membrane abrasions of the bacterial cells (Fig. 1C).

Bacteria in biofilms are 1,000–1,500 times resistant to antibiotics than planktonic forms of bacteria. Despite extensive irrigation, residual bacteria are still resides in approximately one half of the teeth at the time of obturation. Enterococcus faecalis is more frequently found in cases of endodontic retreatment than in primary root canal infections and has been shown to repeatedly resist chemomechanical procedures. Various irrigants and medicaments were proven to be ineffective against E. faecalis. Though NaOCl is a more effective antimicrobial agent against E. faecalis, its toxicity to periapical tissues is of principle concern.8 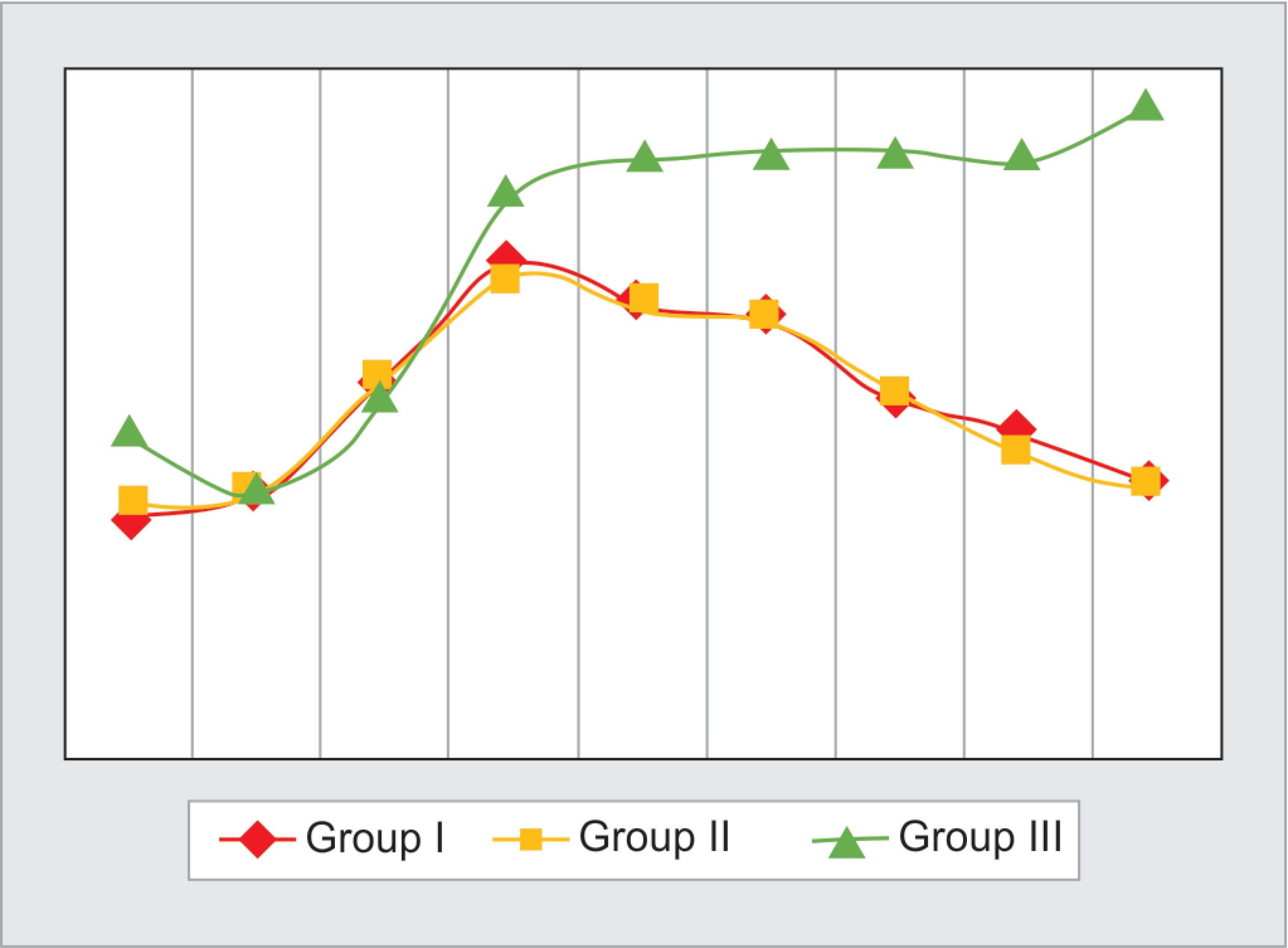 Fig. 2: Graphical representation of mean optical density in the groups over time

The growth of E. faecalis indexed by measuring optical density using a spectrophotometer revealed an initial increase in optical density values in all the three groups. This could be due to the exponential growth of bacteria in all the three samples. However, the optical density values in groups I and II started to decrease in 2 hours in comparison with group III, which might be attributable to the initiation of the bactericidal effect. Further transmission electron microscopic studies done to verify the binding of bacterial cells to the silver nanoparticles showed large number of nanoparticles were adhering to the cell wall and few were also seen localizing in the cytoplasm. This might have been attributable to the smaller size of nanoparticles, enhancing their penetration. Transmission electron microscopic studies done for group I in a time equivalent to irradiation of group II also demonstrated killing of E. faecalis.

Various possible mechanisms of killing of bacteria by silver nanoparticles cited in literature are cell proteins denaturation, inactivation of enzymes, disturbance in respiratory chains of bacteria, and degradation of the bacterial membrane.14 This study also demonstrated the minimal bactericidal concentration (MBC) as 100 μg/mL of Ag nanoparticle with a size of 15 nm was effective against E. faecalis at the end of 24 hours. The initial decrease in optical density values was observed at about 2 hours in both groups I and II. It was assumed that this might be the time taken by the silver nanoparticles to bind to the bacterial cell and initiate bactericidal activity. The time required for initiation and killing might be due to the difference in the structure of the cell wall between gram+ve and gram–ve bacteria, which affected the penetration of nanoparticles into the bacterial cell. However, the extent of inhibition was also dependent on the concentration of the nanoparticles.15

Among various modalities used to disinfect the root canal system, laser technology is at the leading edge. Lasers improve removal of dentinal smear layer, debris, and provide greater accessibility to formerly unreachable parts due to their enhanced penetration into dentinal tubules.16 RamsKold et al. reported that an unlimited number of Nd-YAG laser cycles do not damage the surrounding tissues because the temperature never increased more than 8°C. This laser has been found to reduce periapical inflammation and promote healing in addition to its bactericidal effects.17

Nanoparticle bacterial suspension that was irradiated with the pulsed Nd:YAG laser was analyzed using transmission electron microscopy and revealed disintegration of the bacterial cell wall with the complete fragmentation of bacteria. The suspension inoculated in trypticase soy agar for the bacteriological study revealed no growth of bacteria at the end of 24 hours. The literature states the following mechanisms likely to be involved in killing of bacteria using laser-activated disinfection using gold nanoparticles. An increase in laser energy led to bubble formation around the hot nanoparticles due to the overheating of the surrounding medium. High temperature rise by nanoparticles can cause physical damage to the bacteria cell.7,18 It has been demonstrated that the pattern of bacterial cell death and fragmentation observed in this study using Nd:YAG lasers in combination with silver nanoparticles might be in correlation with the previous study using gold nanoparticles.19–21

Various studies have suggested that silver/gold nanoparticles may act as an anchor point for light-activated disinfection. However, this study was a preliminary step in integrating nanosilver-based antibacterial effects to optimize thermal-based laser treatment. This study was an extension of the previous studies with gold nanoparticles whether the same could be applicable for silver nanoparticles. However, further studies are needed to explore the exact time of initiation of laser-activated nanothermolysis and also to verify whether the bacteria develop resistance toward the nanoparticles. Studies are also needed to probe into the cytotoxicity of nanoparticles toward human cells before proposing their therapeutic use.

The combined effect of silver nanoparticles and laser disinfection against E. faecalis holds a promising treatment modality for eradicating resistant pathogens and biofilms embedded deep inside the dentinal tubules that are not amenable to conventional disinfection protocols in root canals.