The developmental position and path of eruption of mandibular third molars are known to be very irregular and variable. The same kind of variability is also witnessed in the formation and timing of calcification of these teeth.1 Development of mandibular third molar is known to start between 5 years and 14 years of age.2 These teeth generally erupt into the oral cavity at around 18–24 years of age. Often, third molars are impacted or in certain cases are congenitally missing. The impaction rate of the third molars (with mandibular teeth more than the maxillary) is highest in the oral cavity with a range from 9.5 to 39%,3 with mesioangular impactions being most common.

A variety of biological factors have been known to contribute to mandibular third molar impaction or the lack of it. These factors include excessive interproximal attrition leading to mesial migration of the posterior segment, growth-related increase in mandibular length, direction of the growth of the condyle, variations in the pattern of ramal resorption, greater size of mandibular third molars, delayed development of facial structures, the pattern and eruptive path of mandibular dentition, and the available retromolar space.4 During the developmental stages, the third molars continue to change its angulation by undergoing important “preeruptive rotational movements”. Failure of these rotational movements leads to tooth impaction.5

As the literature has showed conflicting results regarding the improvement in mandibular third molars following extraction treatment, the evidence regarding an improvement of mandibular third molar angulation is relatively low. This may be due to the retrospective nature of the previous studies. It has been established that anchorage condition and type of biomechanics employed during treatment have a more significant bearing on the angulation of mandibular third molars over the actual extraction of premolars.6 Further, the effect of different types of anchorage has not been studied until recently.12 Previous studies conducted on adolescent age-groups carried “a risk of overdiagnosis,” as third molar eruption is possible in later stages of root development.13 Selection of nongrowing patients with a high anchorage requirement was able to provide an unbiased view regarding the exclusive effect of extractions on third molar angulation, as anchorage loss was minimal.

The aim of this study was to evaluate the changes in mandibular third molar angulation in high anchorage cases indicated for first premolar extraction vs those to be treated without extractions.

The total sample size of 56 nongrowing patients was divided into two different groups in this prospective study. Treatment plan was decided after careful analysis of pretreatment records, that is, clinical photographs, lateral cephalograms, panoramic radiographs, and study models, in the presence of experienced orthodontists. Group I consisted of 26 patients who underwent first premolar extractions, and group II had 30 patients who were treated without extractions. The study was approved by the ethical committee of Panjab University, Chandigarh (Ethical approval number: PUIEC/2018/89/A-1/09/01).

The assessment of the type of mandibular third molar impaction was done with the help of the Winter’s classification,14 and when the angle between the long axis of the second and third molar was lying between 11° to 79°, it was termed as mesioangular.15

To provide high anchorage in group I, lingual arch was placed prior to leveling and alignment in hyperdivergent patients, and second molar banding was done in normodivergent and hypodivergent patients (Fig. 1). Separate Canine retraction was done to minimize anchorage loss (Fig. 2). In patients with second molar banding, molar stops were made flush with mandibular first molar during separate canine retraction to prevent any loss of anchorage. A mid-treatment radiograph was taken after completion of canine retraction. Anterior retraction was done after making separate units (from canine to molars) in the posterior segment, thus preventing inadvertent anchorage loss (Fig. 3). Mandibular occlusal photographs and panoramic radiographs of a representative patient in group I are presented (Fig. 4).

All the panoramic radiographs were traced using matte acetate paper under adequate illumination. The nasal septum and anterior nasal spine were traced and bisected. Following this, a line was drawn perpendicular to the midline bisector passing through the palatal shadow bilaterally. This line served as a constructed plane, which was termed the “horizontal reference plane (HRP)”. The outlines of the mandibular third molars and mandibular second molars along with their long axes were traced. The long axis of the second molar and the third molar were defined “as the line traced passing from the mid-occlusal point through the midpoint of the root bifurcation and the midpoint between the mesial and distal root tips”8 (Fig. 5). 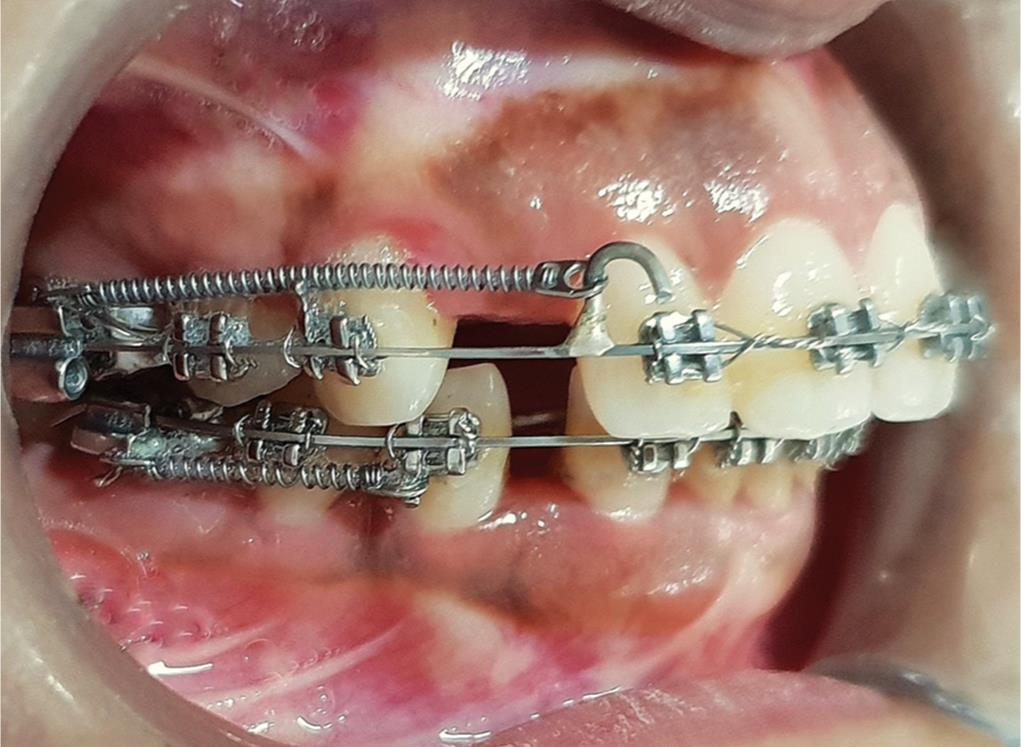 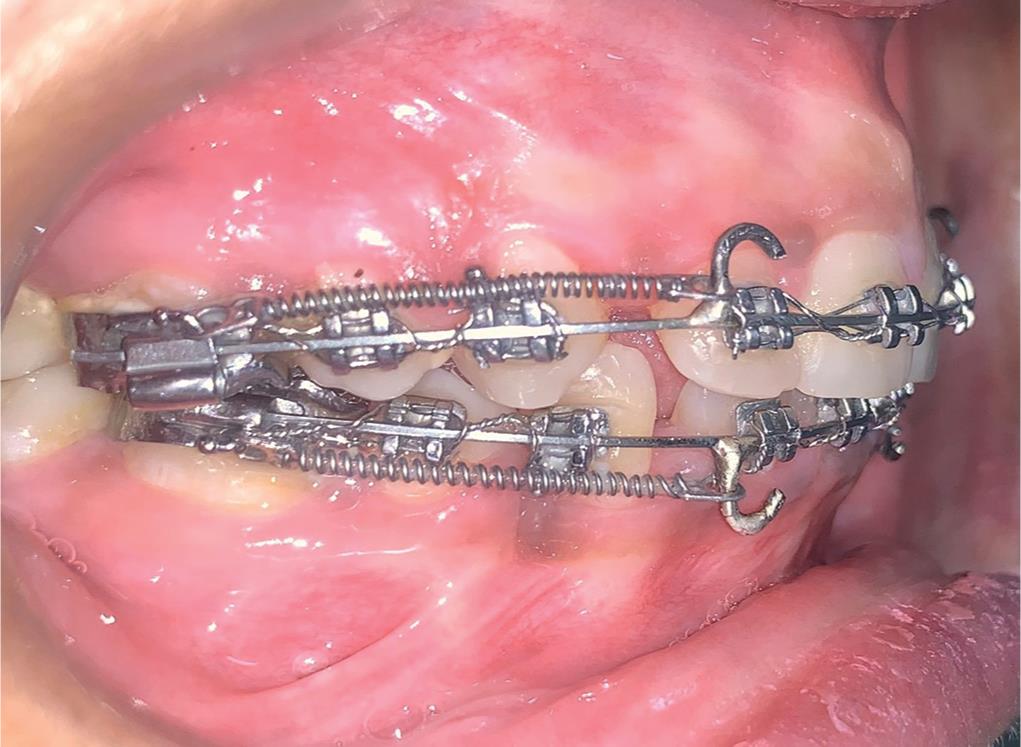 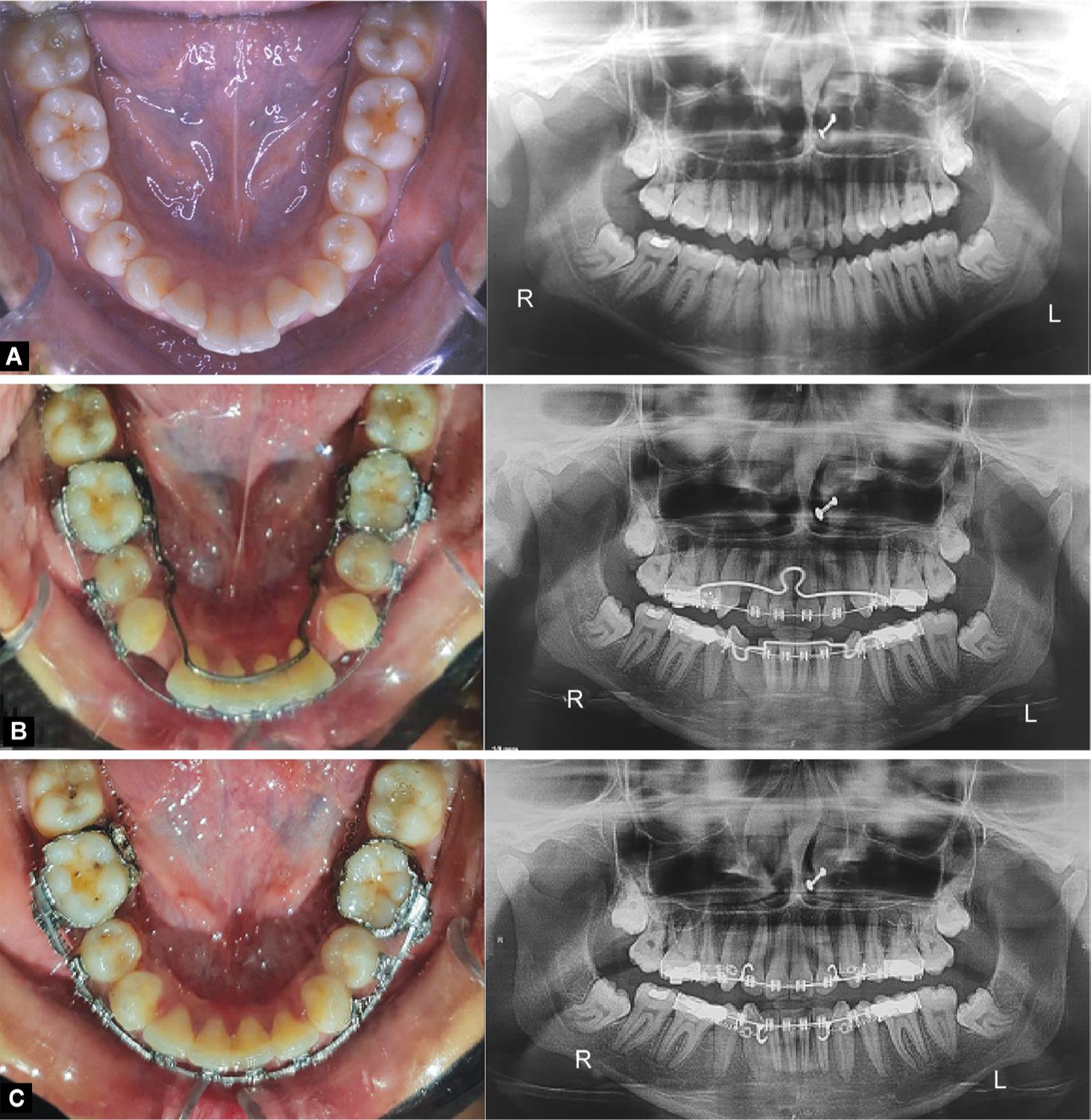 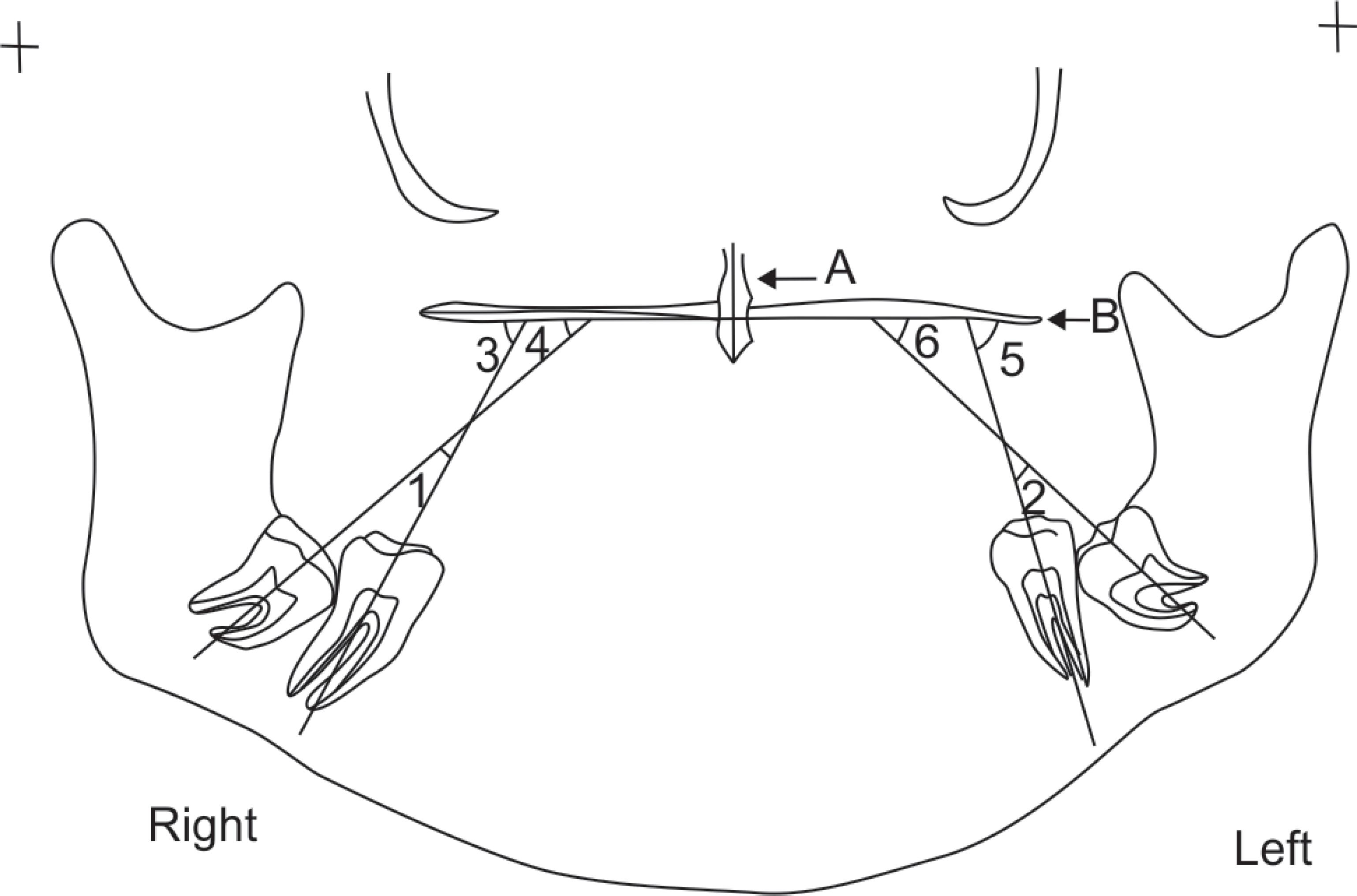 Intergroup comparisons revealed no significant pretreatment to posttreatment differences in the angulations of the M2-HRP, M3- HRP, and M2-M3 between the two groups (Table 5).

Orthodontics, much like other specialties of science, has its fair share of controversies. The present longitudinal study was designed to address the debate surrounding the changes in mandibular third molar angulations following extraction and non-extraction therapy. A large number of orthodontists firmly believe that extraction of premolars have a favorable influence on mandibular third molars,7–9 and ultimately leads to them erupting in good position, while a few others have found insignificant differences between extraction and non-extraction therapy.4,6,11,16 On the other hand, it has been suggested that orthodontic treatment that holds back or leads to a distal tipping of mandibular molars may result in unfavorable rotational movements of the mandibular third molars. This would in turn increase the risk of impaction.5 However, these studies were retrospective in nature, wherein the treatment methodology could not be efficiently controlled which could have further compromised the results in addition to the selection bias inherently associated with retrospective studies.

In the present study, the mechanics were closely monitored and only nongrowing patients having a high anchorage requirement were included in group I. The palatal plane was chosen as a plane of reference, as it is relatively a more stable landmark than the mandibular and occlusal plane as they undergo remodeling during orthodontic treatment.17

In the present study, no statistically significant intergroup difference was seen in the M2-HRP, M3-HRP, and M2-M3 between the two groups. As, M2-M3 values increased in both the groups, the intergroup comparisons revealed no statistically significant worsening of the third molar angulation relative to the second molar, but this result needs to be interpreted with caution as the uprighting of second molars in group II might have confounded this result, especially because in the intragroup comparison, group II did not reveal any considerable change in M3-HRP unlike group I. Moreover, although the M3-HRP angulation did not reveal statistically significant differences, but the third molar angulation worsened to a considerable amount in group I (a decrease of 7.6° on right and 7.16° on the left side) unlike group II (a decrease of 2.5° on right and −1.8° on the left side). This result is suggestive of a possibility of an increase in the severity of impaction in high anchorage cases treated with premolar extraction. The results of the present study also throw light on the fact that extraction offers no significant benefit over non-extraction therapy in improving the third molar angulation in nongrowing patients having a high anchorage requirement.

Similar to the present study, Miclotte et al.11 reported that no significant differences were found in the mandibular third molar angulation between extraction and non-extraction groups. They also stated that factors such as initial crowding, posttreatment position of incisors, and the mechanics involved along with anchorage could lead to such differences between studies. Staggers et al.6 reported insignificant changes in mandibular third found angulation after extraction of premolars and suggested that the third molar angulation is governed by factors other than premolar extractions. However, in the present study, third molar angulations worsened unlike their study where the angles had improved slightly. The reason for this could be attributed to the fact that majority of the patients in their study were adolescents and were undergoing preeruptive uprighting movements. Moreover, as the anchorage requirement was high in the present study, molar protraction was prevented by reinforcing anchorage with the help of lingual arch or second molar banding, and no additional space was available for molar uprighting. In a similar fashion, Artun et al.18 studied non-growing subjects having a mean age of 19 years and concluded that there was no significant difference in third molar angulation between the extraction and non-extraction groups. Further, the suggestions of Artun et al.18 were similar to those by Shiller,19 Hattab,20 and Kruger et al.,21 in stating that the third molars undergo considerable changes from one direction to another in the later stages of root development. They also suggested that the extent of uprighting achieved during treatment cannot form a predictive model for assessing impaction. Moreover, the mandibular third molars that remained impacted displayed a greater degree of mesial angulation at the end of orthodontic therapy over those that erupted.18

Further prospective studies having nongrowing patients with differing anchorage requirement can throw light on the influence of anchorage on mandibular third molar angulation.

In group II, angle between M2-M3 increased bilaterally, but the change was significant on the right side indicating that the third molar angulation worsened, although, statistically significant uprighting of second molars seen in group II could have confounded the results.

No statistically significant intergroup differences were found between the two groups indicating that extraction therapy in high anchorage cases does not improve the third molar angulation over and above the non-extraction therapy, rather it might deteriorate with time in nongrowing patients.