Materials and methods: A total of 40 nickel–titanium rotary instruments (n = 40): 20 WaveOne Gold Small (WOGS) and 20 EdgeOne Fire Small (EOFS) were divided into two groups. Each instrument was tested using a torsional resistance device already validated in previous studies to evaluate and compare torsional resistance. The static torsional test was implemented by blocking each instrument at 3 mm from the tip and rotating it until fracture with a reciprocating motion. Torque to fracture (TtF) and fragment length (FL) were measured and statistically analyzed.

Conclusion: According to the results of this study, it is reasonable to assert that EOFS instruments showed a higher torsional resistance if compared to the WOGS.

Clinical significance: As evidenced by this study, EOFS should be considered as a safer solution, in terms of torsional resistance, if compared to WOGS, reducing the risk of intracanal separation due to excessive torsional load.

The introduction of nickel–titanium (Ni–Ti) rotary (NTR) instruments in endodontics has significantly reduced the operative time of intracanal instrumentation.1 Moreover, NTR files improved the shaping and cleaning ability of the root canal during clinical procedures.2 Despite these superior qualities, the prolonged use of NTR instruments can lead to fracture during the root canal treatment (RCT).3 According to Sattapan et al., two main patterns of fracture can occur using Ni–Ti files: torsional and flexural.4,5 These two patterns of failure could be considered as the major drawback during RCTs. Flexural stresses could result in the formation of microcracks on the instrument surface and, after repetitive compression and tension, the instrument can be fractured due to cyclic fatigue.4 File failure due to torsional stress occurs when the tip or part of the file remains blocked between the canal walls while it continues to rotate.4,6 For this reason, in recent literature many studies focused their attention on Ni–Ti torsional behavior.7,8 Recent studies investigated the role of two prevailing factors affecting torsional resistance, that is, heat treatments and the metal mass of the instrument.7–9 According to the most recent literature, static torsional resistance tests have been evaluated as described by International Organization for Standardization (ISO) 3630-1. According to this, to evaluate torsional resistance, a stainless steel (SS) instrument is rotated at 2 rpm with its tip blocked at 3 mm until fracture and the torque generated is calculated by a torque meter. However, the ISO 3630-1 evaluation does not consider that during clinical practice, NTR instruments are rotated at a higher speed if compared to SS files. According to the authors, the above-mentioned ISO 3630-1 should be changed for a methodology that takes into account the clinical application of NTR files, since it has been demonstrated that rotational speed does not affect the torsional resistance of NTR instruments.10

In the last decades, new kinematics were introduced to minimize the influence of flexural and torsional stresses during instrumentation.11 Reciprocating motion was introduced to improve resistance to fracture since it reduces cyclic and torsional fatigue during root canal treatment.12,13 Reciprocating motion consists of development of a cutting angle and a releasing angle during the instrumentation. The subsequent alternating changes in the direction of rotation could reduce the cyclic fatigue of the NTR files if compared to rotating motion.14 WaveOne Gold (WOG) (Dentsply Maillefer, Ballaigues, Switzerland) is a recent single-file reciprocating instrument that replaced WaveOne (Dentsply Maillefer, Ballaigues, Switzerland). Concerning the cross-sectional design, the WOG is characterized by an uncentred parallelogram with two cutting edges along the instrument surface.15 Moreover, WOG presents the Gold Wire (Dentsply Maillefer, Ballaigues, Switzerland) heat treatment, which according to Zupanc et al. is characterized by a martensitic status with varying amounts of austenite and R-phase.16 These features enhance the instrument with a controlled memory effect and flexibility.16

EdgeOne Fire (EOF) (EdgeEndo, Albuquerque, NM, USA) is a new instrument with the same cross-section of the WOG. This instrument presents a proprietary heat treatment called FireWire™ (EdgeEndo, Albuquerque, NM, USA). According to the manufacturer’s declaration, this heating process provides high flexibility and superior resistance to cyclic fatigue tests. This instrument is developed to be used in reciprocating motion, with the same handpiece settings adopted for WaveOne Gold.17 To date, no studies in the literature have evaluated the torsional behavior of these NTR instruments yet. The present study aimed to evaluate the differences in terms of torsional resistance at fracture between WaveOne Gold and EdgeOne Fire with a previously validated torsional resistance testing device.

The study has been performed at the Department of Oral and Maxillo Facial Sciences of Sapienza University of Rome (Rome, Italy).

After calculating the sample size, and in agreement with the recently published literature on this subject, 40 NTR files (n = 40) were used in this study, divided into two groups using a simple randomization technique: 20 WaveOne Gold Small (Group A) and 20 EdgeOne Fire Small (Group B). All the tested instruments were evaluated with ×20 magnification (SMZ 745T; Nikon, Tokyo, Japan) before undergoing the tests. None of the analyzed NTR instruments were discarded due to manufacturing defects, such as microcracks and dented cutting edge.

The torsional test was performed using a torsional resistance testing device that was already validated in the literature.18,19 A torque recording endodontic motor (KaVo, Biberac, Germany) appropriately modified to perform reciprocating motion, was used in this study. This endodontic motor could register the variations of the torque generated by the instrument during the intracanal instrumentation every 0.1 seconds. According to ISO 3630-1, the tip of the file was blocked at 3 mm from the tip, stuck in a vise (Fig. 1). 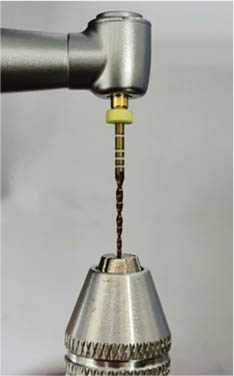 Using the same settings recommended for WaveOne Gold, each file was rotated using reciprocating motion, until fracture occurred. The torque limit was set at 5.5 N cm. Torque to fracture (TtF) was recorded and tips fragment length (FL) of the instrument was measured using a digital caliper. Moreover, the separated instruments of both groups were analyzed with a Zeiss Axio Microscope (Carl Zeiss MicroImaging, Göttingen, Germany) to visualize fracture patterns (Figs 2 and 3). 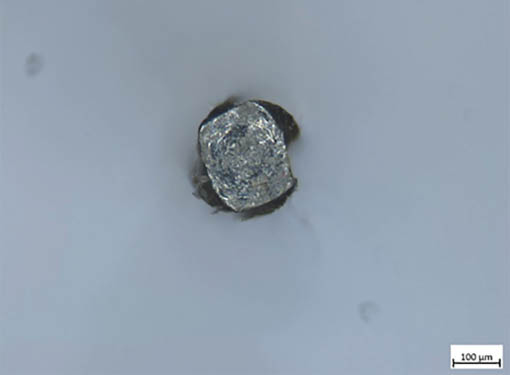 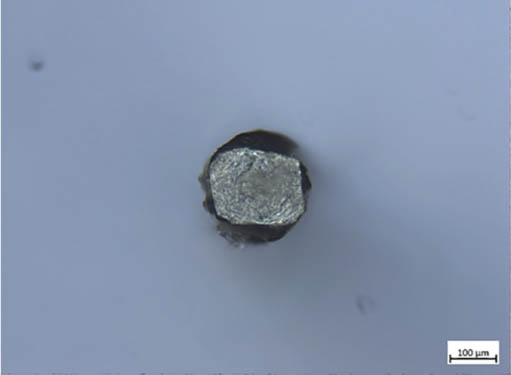 Data were collected and analyzed using the SPSS 17.0 software (SPSS Incorporated, Chicago, IL, USA). Moreover, the mean value and standard deviation were calculated and the student’s t test with the significance level set at p <0.05 was performed.

Table 1 shows the mean values for FL for both groups. Statistical analysis showed no significant differences (p >0.05) between the two instruments.

Table 2 shows the mean values of TtF for both groups. Group B showed higher TtF if compared to Group A.

Instrument failure during RCTs remains a serious drawback for the clinician.20,21 Root canal geometry may be considered as a leading factor influencing the stress applied to the instrument and the high fracture incidence in curved canals is a consequence of this.3 As described by Parashos and Messer, another important factor in determining fatigue resistance of NTR instruments is the number of uses and stress accumulated during previous RCTs.3,22 Furthermore, the first shaping file of a sequence can be subjected to a higher torsional load during instrumentation.23 A recently published study showed that the non-use of lubricants during intracanal instrumentation could increase the instrument fracture due to torsional stress.24 For the above-mentioned reasons, the reciprocating motion has been proposed to decrease the frequency of taper locks.25 The NTR instruments presented in these studies, WaveOne Gold and EdgeOne Fire, have been designed to be used with reciprocating motion. As described above, the alternating motion gives superior flexural resistance to the instruments during clinical usage.25

NTR instruments fracture usually occurs without any visual warnings and with only microscopical permanent deformations. In literature, many studies investigated the main features that could influence the torsional resistance of instruments: numerous variables, like presence of flexural stress, instrument manufacturing processes, taper, size, pitch, shaft length, cross-sectional design, and metal mass distributed along the instruments could influence the clinical performance of an endodontic file and its resistance to both cyclic and torsional stresses.3,26–30

Since multiple parameters can affect the torsional strength, during in vitro tests, it is necessary to consider only one feature to avoid bias. Indeed, the major problem in carrying out this type of research is the standardization of each of the above-mentioned factors. For these reasons, we selected WaveOne Gold and EdgeOne Fire, which present the same tip, taper, cross-sectional design, and pitch, and they differ only for the heat treatments provided by the manufacturers. Moreover, the manufacturers suggest the same clinical motion for the two files, with the same cutting and releasing angle.

It has been demonstrated that heat-treated Ni–Ti instruments have a better performance regarding the angular rotation and torsional resistance if compared to conventional similar Ni–Ti files. As described by Tabassum et al., the extreme ductility provided by some heat treatments could explain the superior flexibility and therefore the higher resistance to failure of such type of instruments.31

As showed in Table 2 fragment length (FL) mean values were calculated and no significant differences were found (p >0.05). This result demonstrates that there is no difference in the tip length of the files blocked for the test and, therefore, no differences in the portion of the instrument subjected to the stresses.

Results for TtF showed significant differences (p <0.05) for both tests. These results could be explained by the prevalent difference between the two tested instruments. WaveOne Gold presents an innovative heat treatment, the Gold Wire. To date, many studies investigated the role of Gold Wire alloy in torsional and flexural resistance. Gold treated instruments represent new technology in the field of endodontic instruments resistance.16 Therefore, in this study, the EdgeOne Fire instruments resulted to be more resistant to torsional stress when compared to identical instruments made with Gold Wire treatment. Even if the number of the instruments used in the present study is meager, the difference between the two tested instruments could be due to the innovative three-dimensional aspect of the crystalline matrix of the FireWire™ that confers to the alloy not only higher flexibility, as shown in previously published studies, but also superior resistance to torsional stress.17

Since we used the same motion and similar-in-shape instruments, differences could be related to the different heat treatments provided during the manufacturing process. Within the limitation of the present study, it can be assessed that the FireWire™ treatment could provide more torsional resistance to the instruments if compared to the Gold Wire. Further studies are needed to better evaluate the role of thermal treatments during torsional resistance tests.

As evidenced by the results of this study, the possibility of reaching a higher torsional resistance by performing proper heat treatments during the manufacturing process should be considered a very promising solution that could improve endodontic practice, reducing the clinical risk of intracanal separation and its consequent complication in reaching a proper RCT.