Conclusion: The aluminium chloride containing paste was found effective in almost all the variables considered.

Clinical Significance: The choice of particular gingival retraction system/technique is dependent upon the clinical variables and on operator’s preference.

In the era of modern dentistry, esthetics has become an integral component of treatment. Fixed prosthetic protocols in the esthetic areas unvaryingly encompass subgingival margins. Researches from the past literature have highlighted that subgingival margins are at higher risk of plaque accumulation in comparison to supragingival margins. Fixed partial dentures (FPDs) are routinely and effectively used for prosthetic rehabilitation of dentulous and partially edentulous patients. Synchronization between the prosthetic component and the periodontal tissue is vital. Technicality involved in framing of fixed prosthesis has continually been exaggerated in contrast to the clinical prospect.1–3

Oral cavity pretences many obstacles in the field of conservative dentistry from compelling impact of tongue and buccal mucosa to different hindrances of illumination, visual, and isolation while carrying out tooth preparatory procedures. The supposed “moisture control” is an indispensable component of any conservative dental procedure. It has been observed that the cavity contamination has a deleterious impact on the longevity of direct resin composite bond to tooth structure, specifically in patients in which there are persistent subgingival finish lines. Though by employing rubber dam delivers adequate control of the restoration part and access to the preparation, in most of the cases, its use is prohibited. Hence, substitute approaches of supervising moisture must be considered.4,5

Gingival displacement is a process which is done before making final impression. It reveals preparation’s finish margins adequately. The impression method employed in the procedure of framing fixed prostheses needs displacement of the gingival tissue for revealing the finish lines on final preparation of abutment.6–8 Hence, successful handling of the gingival tissue before impression making is a critical initial phase during fabricating restoration procedure.7,8 Knitted retraction cord is a rapid, simple, and cheaper technique but its utility is limited to supragingival preparation margins only. Expanding polyvinyl siloxane retraction system offers advantage of avoiding potentially traumatic and slower packing of retraction cord. However, its effectiveness has been reported to be lesser in comparison to different other retraction systems. Aluminium chloride falls under the category of hemostatic agent; hence, it prevents iatrogenic injury to gingival tissues. They also have astringent effect. However, their efficacy is limited in pockets which are deeper than 2 mm.7–9 There is paucity of data in the literature comparing the effectiveness of these three gingival retraction systems. This study aims at comparative evaluation of gingival displacement obtained using the following retraction systems: knitted retraction cord, expanding polyvinyl siloxane, and aluminium chloride containing paste, taking depth and width of gingival sulcus as the parameters.

In the present study, twenty patients were enrolled with age-group of more than 18 years and who required fixed prosthesis with minimum of two abutments. Abutment teeth with sound gingival and periodontal health were included. Subjects with the presence of gingival and periodontal diseases were excluded. Ethical approval was obtained from ethical committee of the institution. Informed consent was also obtained from all the patients before commencing the study. The sample size was calculated using the formula N = (Z1 − α/2 + Z1 − β)2, where Z − α/2 is the standard normal deviate at type 1 error α = 0.05.

A preliminary impression of the arch was made with a stock metal tray and irreversible hydrocolloid impression material. Dental stone models retrieved from these impressions were used to fabricate custom acrylic trays with a double sheet modeling wax spacer. On the tray, perforations were created. The tray included one tooth on either side of the abutment teeth. A total of four trays were made for each sample.

The abutment tooth was prepared for full coverage crown with an equigingival finish line. After few days—the baseline impression was made, impressions were made after displacement with one of the three displacement agents.

The time interval for displacing the gingival tissue and for making an impression followed a Latin block design.

On day 1, the baseline impression was made. On day 2, day 3, and day 4, impressions were taken after displacement with anyone of the three displacement agents.

In the control group, baseline impressions were taken. Afterward, a second impression was taken after taking away the spacer.

Isolation of the tooth with cotton rolls was done. Retraction cord was looped around the tooth. Packing was started from the mesial interproximal area by gently pushing it into the sulcus with the gingival cord packer instrument (Hu Friedy) using the single cord technique. Retraction cord was kept in place for 10 minutes. An impression using putty consistency PVS and cellophane sheet spacer was made, cord was removed, and impression relined with light-body consistency PVS.

Expanding polyvinyl siloxane was available in cartridges which were automixed using syringe tips and applied into the gingival sulcus using oral tips. Anatomic comprecaps preselected according to the size of the tooth were placed over it and patient was instructed to close mouth under bite pressure. Magic foam cord was left in place for 5 minutes according to the manufacturer’s instructions and impression was made similar to baseline impression.

Figs 1A and B: (A) No retraction and (B) Impression without retraction 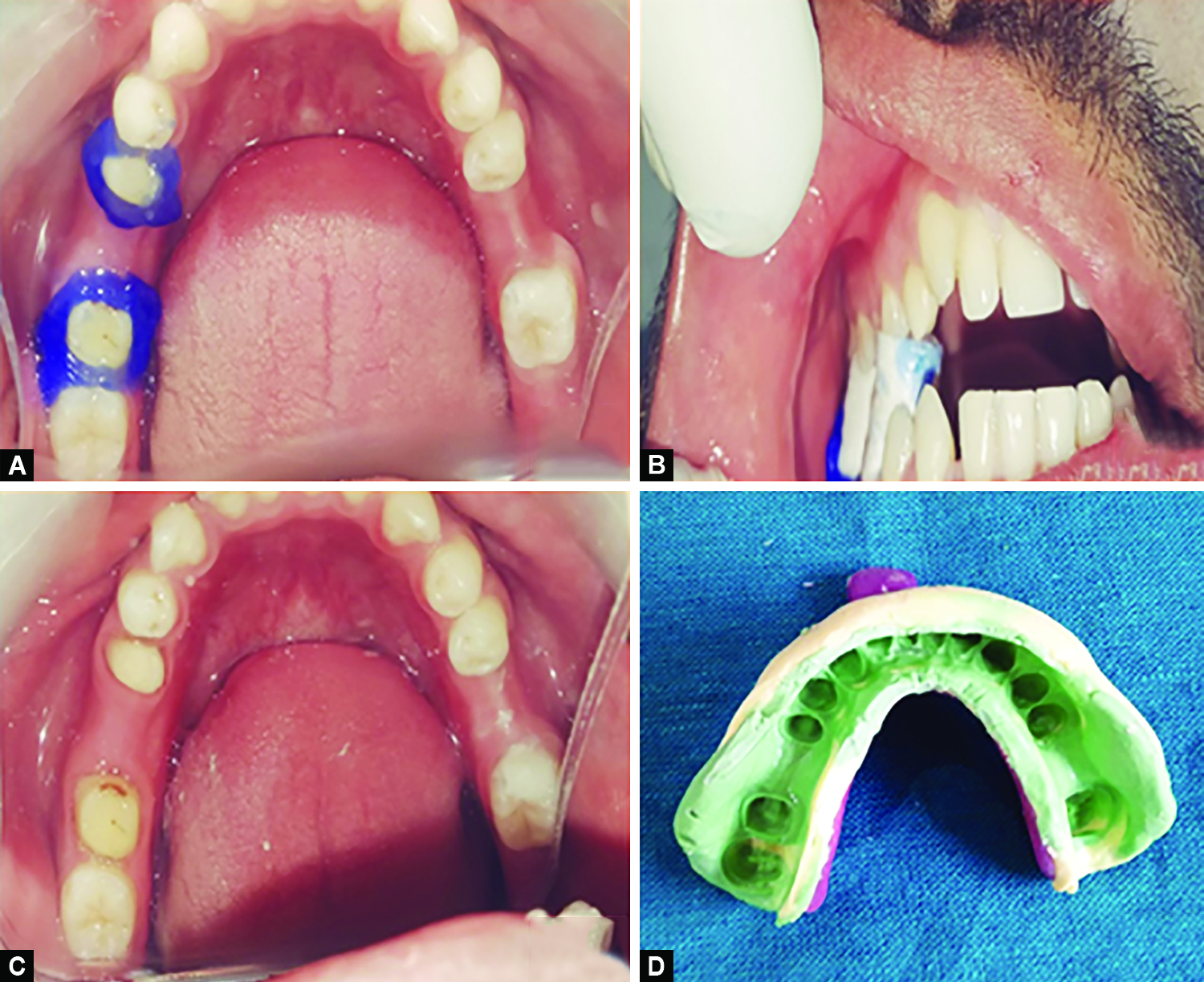 Evaluation of Samples for Gingival Retraction

The stereomicroscopic evaluation of abutment teeth singly on polyvinyl siloxane impressions made before retraction and after retraction was compared using image analysis software (Fig. 5). 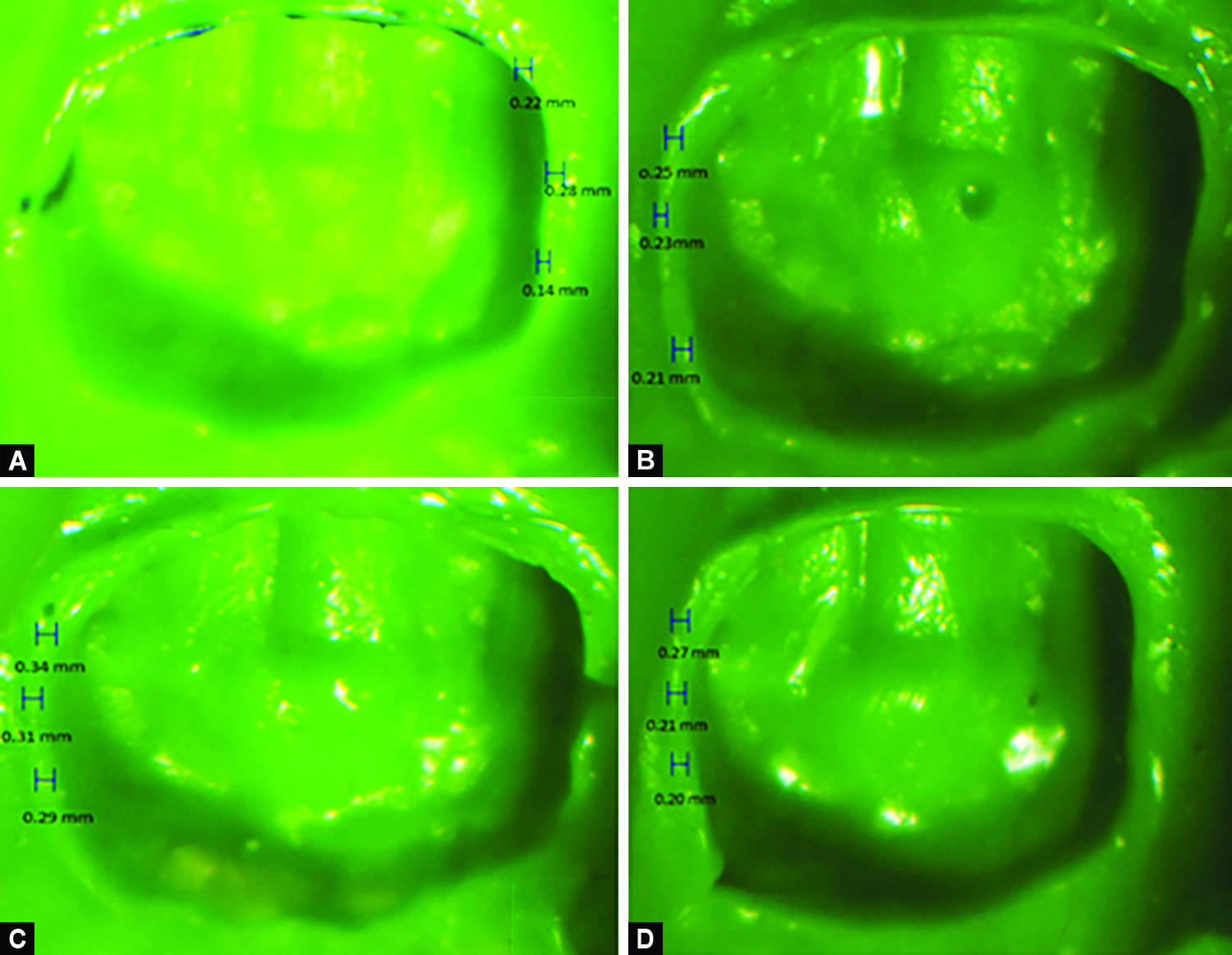 Time required from start of placement of gingival displacement agents till completion was recorded in seconds with the help of a stop clock. Each agent was placed after a few days interval. All the results were recorded in Microsoft excel sheet and were subjected to statistical analysis using SPSS software version 16.0. Tukey’s test and one-way ANOVA were used for the evaluation of level of significance. 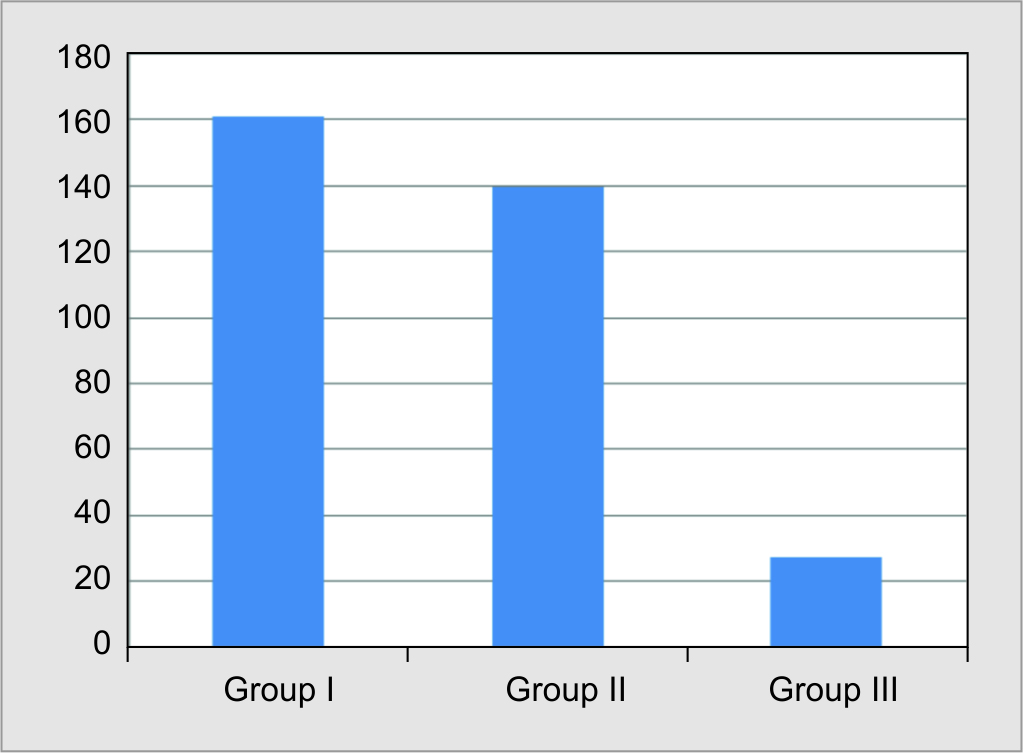 There is paucity of data in literature in relation to the clinical effectiveness with gingival retraction materials. Ultrapak retraction cord has chain-like construction of interlocking loops. Reliability of the cod whether it is twined or knitted is more significant in comparison to the type of medicament used.6,7 Along with this, the cord’s saturation with the solutions is highly dependent upon the wetting of the cords.7–9 In the current research, cord was soaked in saline solution to enhance the mechanical effect and 20 minutes of soaking time was necessary for the saturation of the cords before use, provided that air trapped within the cords was removed.

Adequate handling and supervision of the gingival sulcus are required for successful subgingival impression. It encompasses two key variables: the amount of force to which gingival tissues are subjects; and contaminants that might exist in that vicinity.7–10 The accomplishment and marginal integrity of any prosthetic component are largely dependent upon precision of their margins. Precise adaptation of prosthetic component to finish line is must for diminishing the cement dissolution and for preserving the periodontium in FPD cases. This is likely to occur only when abutment particulars are taken accurately in the impression and precisely transferred to the cast. Because of these causes, gingival displacement is must to capture subgingival preparation specifics.10–12

In the present study, the mean gingival retraction was found to be the highest for subjects of Group C followed by Group A, Group B, and Group WR. This difference was found to be statistically significant. Both the retraction materials produced sulcus width of >0.2 mm, but the amount of retraction produced by both of these materials was almost similar. Our results were in concordance with the results obtained by Mehta et al., who also observed similar findings. In their research, authors assessed and compared the effectiveness of three gingival retraction systems in root canal-treated teeth. They analyzed 45 subjects and broadly divided into three study groups depending upon the type of retraction cord used. Their results did not demonstrated significant effectiveness of that the new retraction systems in comparison to the usual retraction cords.14

In the present study, mean time required for application among Group A, Group B, and Group C was 160.8, 139.45, and 27.5 seconds, respectively. In a previous study conducted by Gupta et al., authors compared the clinical effectiveness of three new gingival retraction systems: stay-put, magic foam cord, and expasyl. The authors concluded that the magic foam cord retraction system could be regarded as more effective gingival retraction system in comparison to others.15 Studies have evaluated the clinical success of “Expasyl” as an alternative to conventional retraction cord using the matrix impression system (MIS) with the aid of a stereomicroscope.14–16

In the present study, Latin block design was employed in sequence of gingival displacement to overcome the tissue fatigue. Normally, the amount of displacement produced during the first retraction would be expected to be the least when compared to the last retraction or vice versa. This would mean that the first agent and the last agent may give results that are not true to their chemistry but by virtue of the amount of tissue fatigue that occurs during the procedure of displacement. Latin block design delivers equivalent probability for each agent to be placed at a differential order of treatment; hence, it is employed in this study. In another study conducted by Qureshi et al., authors compared the effectiveness of different gingival displacement materials in achieving gingival tissue displacement. From the results, they concluded that the astringent gingival retraction paste demonstrated maximum gingival displacement.16,17

The aluminium chloride containing paste was found to be efficacious in all the parameters included in the current research. Also, the optimal gingival retraction apparatus is still determined by clinical environment and on clinician’s preference.

LIMITATION OF THE STUDY

Same patients were called for the impression procedure four times, which was quite cumbersome and could have caused alteration of the results. We could not find any other method to circumvent this.