How to cite this article: Koul A, Lanka HB, Krishna R, et al. A Digital Chairside Technique for an Accurate Evaluation of the Taper of the Prepared Teeth for the Restoration of Crowns and Fixed Partial Dentures. J Contemp Dent Pract 2021;22(8):969–972.

Aim: The aim of the article was to provide a digital chairside method for the objective evaluation of the taper of prepared abutment teeth retaining a fixed partial denture (FPD).

Technique: The proposed technique utilized an intraoral camera with an on-the-go (OTG) connection, and a silicone dental bite block. The images of the prepared teeth were captured using this camera from the facial aspect. An indigenous program was developed using the MATLAB (Matrix Laboratory 2013) software for the analysis of the images and the taper of each abutment tooth was calculated in degrees using the software.

Conclusion: The novel, chairside, digital technique utilizes an intraoral camera and a computer-generated software package to quantify and evaluate the taper of abutment teeth efficiently. This, in turn, can help minimize the errors in the treatment of FPD and improve the retention of the prosthesis.

Clinical significance: The current technique enables the clinician to avoid over-preparation of the abutment teeth by assessing its taper chairside. This digital technique can be a beneficial alternative to the existing procedures for an accurate assessment of taper, especially for the inexperienced operator. Hence, the quality of retention, and thereby the long-term success of the crowns and FPDs, can be enhanced.

Tooth-supported fixed partial denture (FPD) has been one of the predominant treatment modalities in the partially edentulous for several decades. The design of an FPD is influenced by many factors like esthetics, contact points, and pontics. In every design, a property of prime importance is retention.1–3 By virtue of retention, a restoration like a crown is prevented from getting dislodged from the tooth by forces acting opposite to its path of placement.2 Retention of a crown is generally influenced by the preparation height, diameter, surface area, and luting cement. A predominant operator-controlled factor is the convergence angle or taper.4

Most of the techniques described in the literature for the evaluation of taper of the prepared abutment teeth are subjective in nature and do not quantify it.1,14–16 This article describes an easy chairside method to objectively evaluate the taper of the prepared teeth using digital technique. The proposed technique makes use of an intraoral camera and an indigenously developed program through a computer-generated software package.

The suggested technique utilized an intraoral camera (Waldent Intraoral Camera USB Model, Waldent Innovations Pvt. Ltd.) with an OTG connection and a silicone dental bite block. A MATLAB (Matrix Laboratory, 2013) software package was used to develop a program for the analysis of the images of the prepared tooth. The procedure for evaluating the taper of a single prepared tooth to receive a crown has been described as follows: 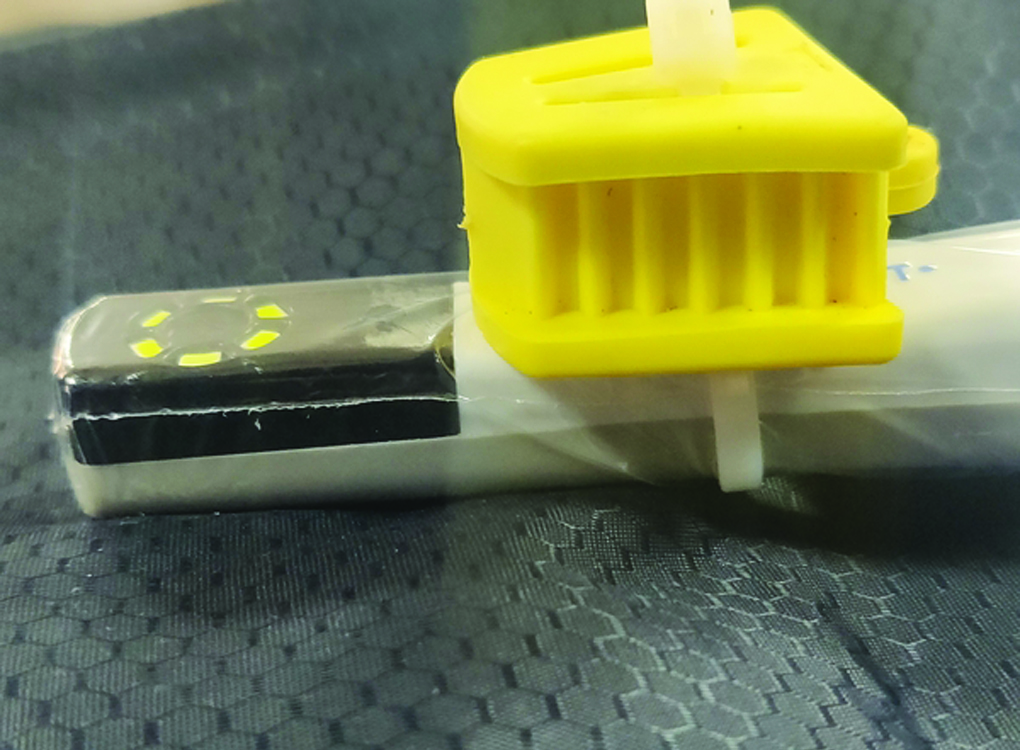 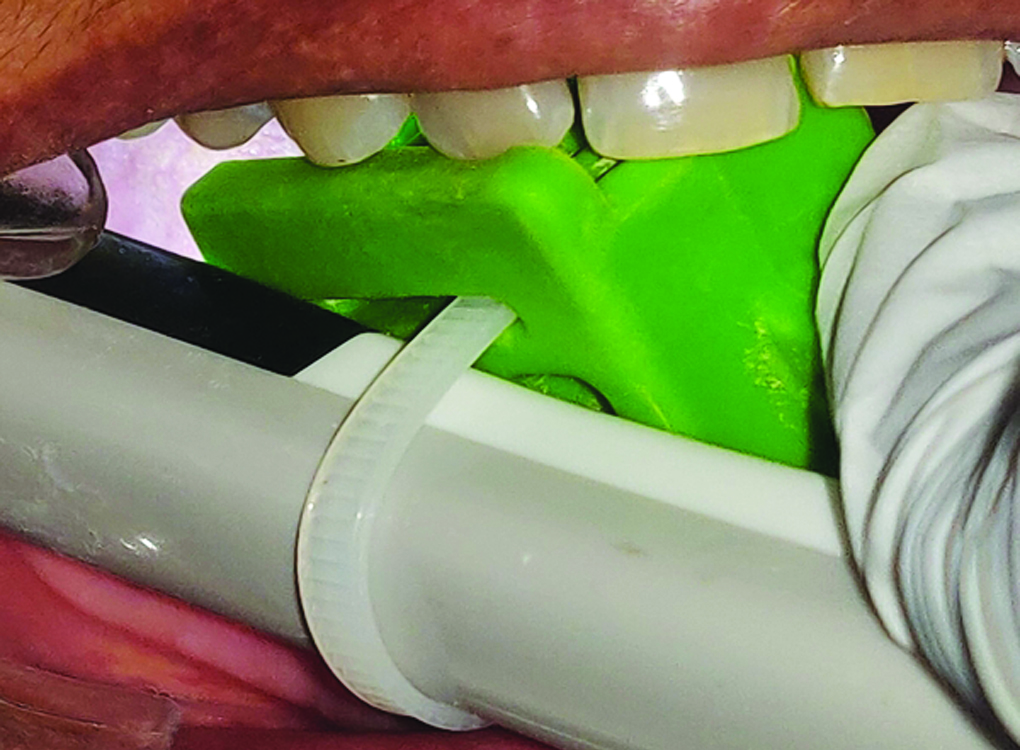 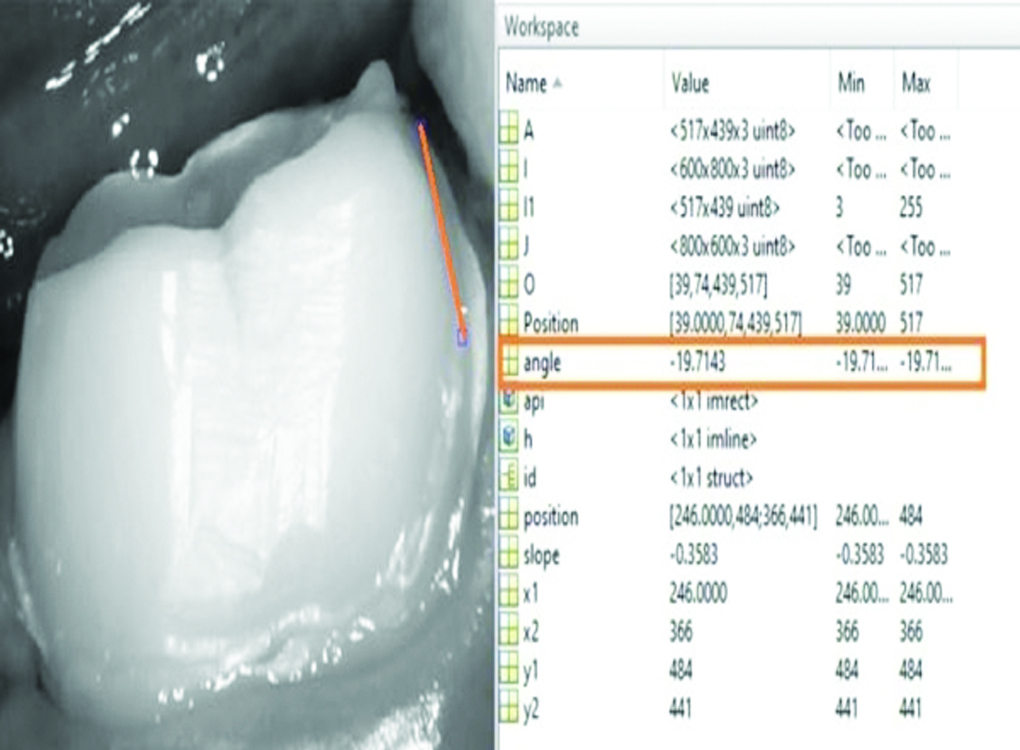 Fig. 3: Initial assessment of taper of the mesial wall of the prepared abutment 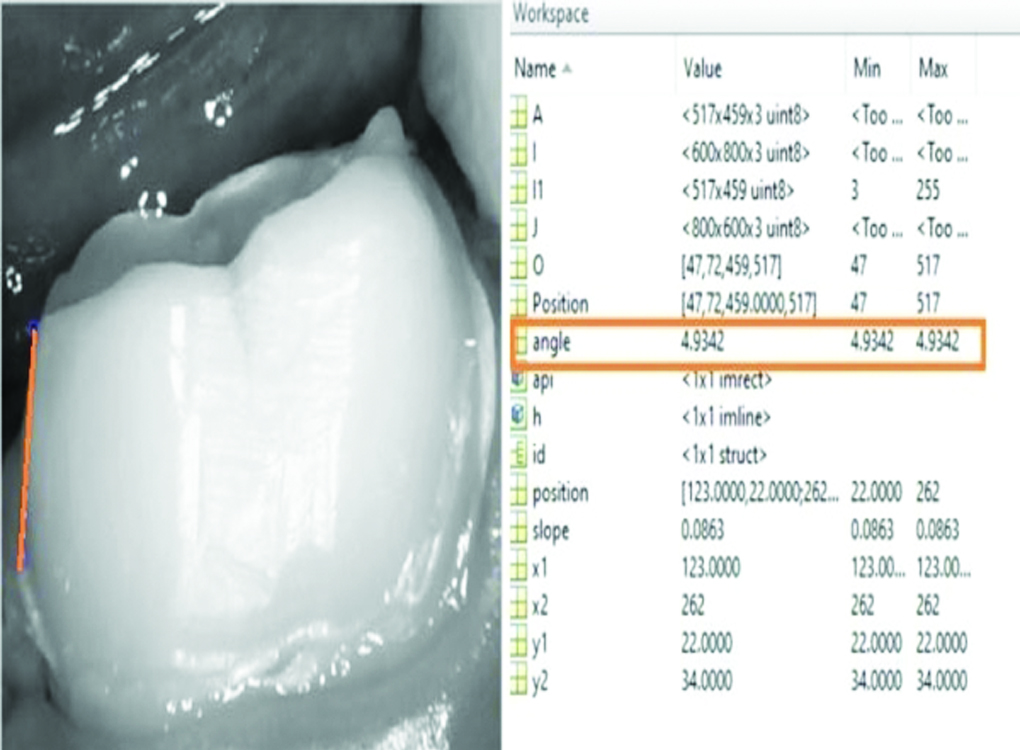 Fig. 4: Initial assessment of taper of the distal wall of the prepared abutment 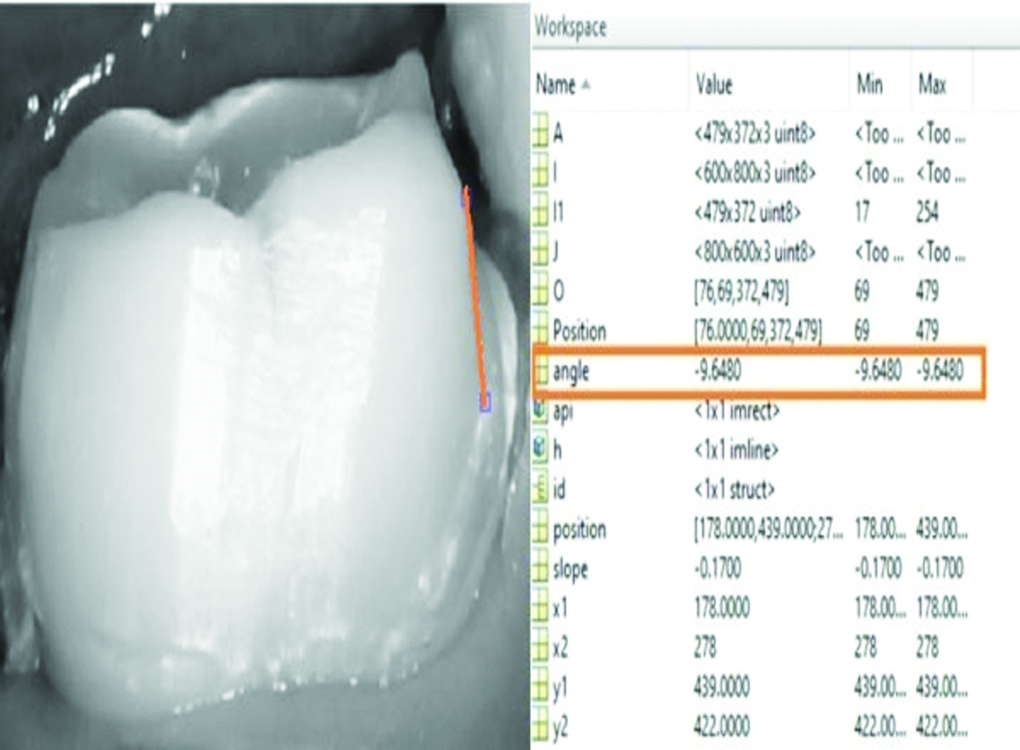 Fig. 5: Final taper of the mesial wall of the prepared abutment after modification 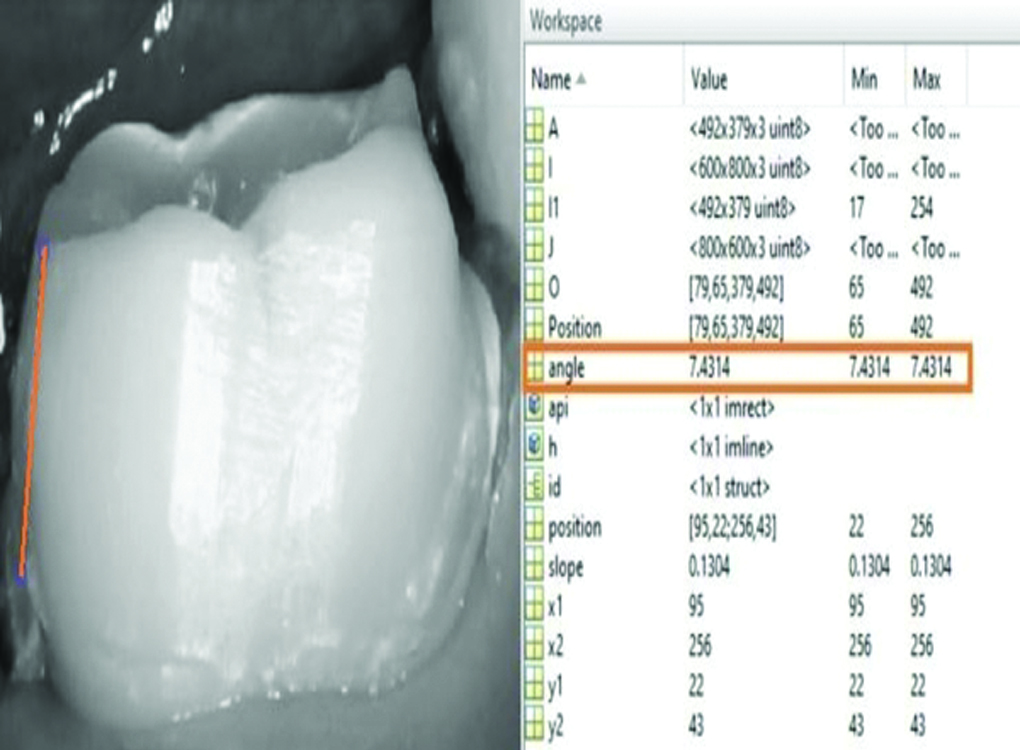 Fig. 6: Final taper of the distal wall of the prepared abutment after modification

According to Glossary of Prosthodontic Terms-9, taper is defined as the angle measured in degrees as viewed in a given plane, formed between an external wall and the path of placement of tooth preparation or machined surfaces on a metal or ceramic material when prepared for fixed dental prosthesis.11 Parallel opposing walls of a preparation increase the retention of the prosthesis.12 However, it is challenging to create parallel walls in the mouth without producing preparation undercuts. Therefore, preparation walls are tapered for easy visualization, prevention of undercuts, compensation for inaccuracies in the fabrication process, and permitting accurate seating of restorations during cementation.13 During the preparation of multiple teeth, it is a common practice to increase the taper of the teeth to achieve a common path of placement. This leads to a greater convergence angle for abutments of FPDs than individual crowns. These over-tapered abutments sacrifice the retentive form, which can jeopardize the long-term success of the prosthesis.4

The proposed technique was made to use of a commonly available intraoral camera which was used to capture the image of the prepared tooth. The camera was stabilized in the patient’s mouth with a silicone bite block using a disposable zip tie. These images were converted to grayscale images and then run through the indigenously developed MATLAB programming software for the evaluation of taper of the prepared abutment tooth. This technique enables the clinician to accurately judge the taper of the prepared teeth chairside. This technique is not only objective but also user-friendly which can help minimize the errors in the restoration of crowns and FPDs. It can thus improve the clinical outcomes and thereby increase the long-term success of crowns and FPDs.

Researchers have proposed various methods over the years to evaluate the convergence angle of the prepared teeth. A commonly used technique is to view the preparation from the occlusal aspect through a mouth mirror. The mouth mirror is held at a suitable angle and centered over a prepared tooth. The taper of the tooth is evaluated with one eye closed. For an FPD, the taper is assessed in a similar way by moving the mouth mirror from one preparation to the adjacent one without altering its angulation.1 However, as the number of abutments and the space between them increases, it becomes difficult to use this method. This technique may have the limitation of being subjective in nature. The proposed digital technique may provide an easy, precise way of subjectively analyzing the taper of the prepared teeth chairside.

The use of a dental periscope has been suggested by Patil et al.14 This involves the use of three plain mirrors attached to a metal framework at a specific angle. The apparatus is bulky and may also be unstable in the patient’s mouth. The present technique is patient-friendly and makes use of a silicone bite block for stabilization in the patient’s mouth.

The use of an overhead projector was advocated by Nordlander et al.15 The projected images of the abutment walls from a stone model were measured for the convergence angle using a protractor. The process is time-consuming and cannot be used as a chairside technique. The proposed technique can enable the clinician to objectively evaluate the taper of the prepared teeth chairside and can be a time-efficient technique.

Farah16 described a laser module technique that requires chairside pouring of the impressions using light body and putty polyvinyl siloxane material. The preparation was then analyzed using a laser module that is attached to a surveyor. This technique may be laborious as it requires frequent pouring of the elastomeric cast until a continuous laser line is obtained on all the abutments. It is also not cost-effective. The present technique being proposed is both cost-effective and time–efficient as it eliminated the need for multiple impressions during tooth preparation.

The limitation of the proposed technique may be the initial learning time required for using the software to analyze the taper. Also, adequate moisture control is required to obtain clear images of the abutments for their software assessment. Moreover, it may be difficult to stabilize the bite block if the opposing arch is edentulous and not restored. Further, clinical studies are required to validate the proposed technique with regard to its clinical efficiency and also the influence on the long-term success of crowns and FPDs.

The present technique can enable the clinician to avoid over-tapering of the tooth preparation by an objective evaluation of the taper of the prepared teeth chairside. This technique can be a useful alternative to the existing techniques by assisting in improved judgment of preparation of the taper that can enhance the quality of retention and therefore increase the long-term success of crowns and FPDs. It may also be utilized in training programs for operators with less clinical experience.