Source of support: Study supported completely by the International Medical University under the Special Study Module. Project ID: BDS I-01-2018 (09).

Aim: The aim of this study was to evaluate initial peri-implant crestal bone level changes when the allografts and xenografts were placed simultaneously during the implant placement.

Materials and methods: This retrospective study was planned with the convenient sampling total of 77 implant sites that were bone grafted either with allografts (group I) or xenografts (group II). Using the periapical radiographs obtained after placement of bone grafts as baseline, the changes in the alveolar crestal bone around the implants were evaluated by comparing periapical radiographs taken at 3 months and 6 or 8 months after the surgery.

The outcome of the implant therapy significantly depends on the availability of a sufficient bone volume to support the implants in their optimum position. Alveolar bone atrophy and dimensional changes following dental extraction usually present a compromised clinical situation for the dental implants.1,2 Overall healing process after the tooth extraction leads to decrease in the alveolar ridge dimensions almost up to an average of 50% of its original size.3 This resorption pattern is particularly rapid in the first 3–6 months, followed by gradual reduction thereafter, throughout life. This bone resorption significantly reduces the possibility of dental implant therapy and creates both functional and esthetic issues during prosthetic rehabilitation. Based on the understanding of inevitable physiological bone resorption, alveolar ridge preservation procedures (ARP) with the application of various bone-grafting materials were developed to control the crestal bone resorption. The bone graft types include autograft, allograft, xenograft, and alloplastic grafts. Numerous studies have been performed to determine the clinical behavior of different graft materials with the allografts and xenografts being commonly used in implant therapy.3–7 The allografts are tissue grafts derived from another person other than person receiving the graft and are harvested from cadavers.8 They are classically referred to as having osteoinductive capabilities as well as quick resorption.3 The xenografts are taken from a species other than the human, for instance bovine.8 They are used as a natural calcified matrix by complete removal of the organic components to avoid any transmission of pathogens as well as immunological reactions. The remaining inorganic components have the capability for osteoconduction to maintain the tissue volume.3 If the bone loss measured from baseline to 6 or 8 months is less than 2 mm, the graft material is considered satisfactory and suitable for grafting at the implant sites.

Performance of different bone-grafting materials in terms of initial crestal bone level changes is not studied extensively, even though it is one of the most critical elements in overall implant treatment success. Comparison between xenografts and allografts in ARP procedure may provide useful information to clinicians and researchers. The aim of this study was to evaluate initial peri-implant crestal bone level changes when the allografts and xenografts were placed simultaneously during the implant placement.

This retrospective study examined the intraoral periapical (IOPA) radiographs of the patients undergone the bone-grafting procedure followed by the dental implant placement in the clinic of authors’ institution. The institutional ethical committee clearance has been obtained [Project ID: BDS I-01-2018 (09)]. The radiographic records of the patients treated between January 2015 and June 2018 were selected with age more than 18 years who undergone bone-grafting procedure for dental implants either with the allograft (Puros® Cortico-Cancellous Particulate Allograft; Zimmer Biomet) or the xenograft (Cerabone, Biotiss Dental). All implants evaluated in the study were of Nobel Active (Nobel Biocare).

Medically compromised patients or patients who undergone additional grafting procedure or delayed implant placement were excluded from the study. The patients with distorted or blurred IOPA radiographs or absence of either of the required IOPA radiographs were also excluded from the study. The radiographs showing more than 1.5 mm of discrepancy in overall length of the implant appearing in the IOPA radiograph at different time points were also excluded to avoid significant measurement errors. Patients fulfilling the aforementioned criteria were divided and tabled based on the bone grafts they received—alloplastic, autogenous, allografts, and xenografts. Only allografts and xenografts were included in this study. Sample size (n = 77) was calculated based upon a pool of patients visiting the oral health center with 5% margin of error and 95% confidence interval and at the power of 80% by using an online sample size calculator (Raosoft Inc).

The IOPA radiographs were evaluated at four time intervals: (1) preoperative IOPA before surgery to evaluate the preoperative host bone level (Fig. 1A); (2) postoperative IOPA obtained immediately after surgery, which acts as the baseline (Fig. 1B); (3) after 3 months of surgery (Fig. 1C); and (4) after 6 or 8 months after surgery (Fig. 1D). The IOPA radiographs of the third recall visit were found to be either after 6 or 8 months after surgery, which were included in the study and divided into two subgroups. The measurements were carried out by taking the average level of the mesial and distal alveolar crestal bone from the neck of the implants to the topmost part of the bone graft material using the computer software program (Eigentool; Henry Ford) (Figs 1B to D). To calculate the alveolar crestal bone level changes around the implants, the extent of bone resorption was measured by comparing radiographs obtained immediately after the surgery (baseline) to the IOPA acquired after 3 months and 6 or 8 months. 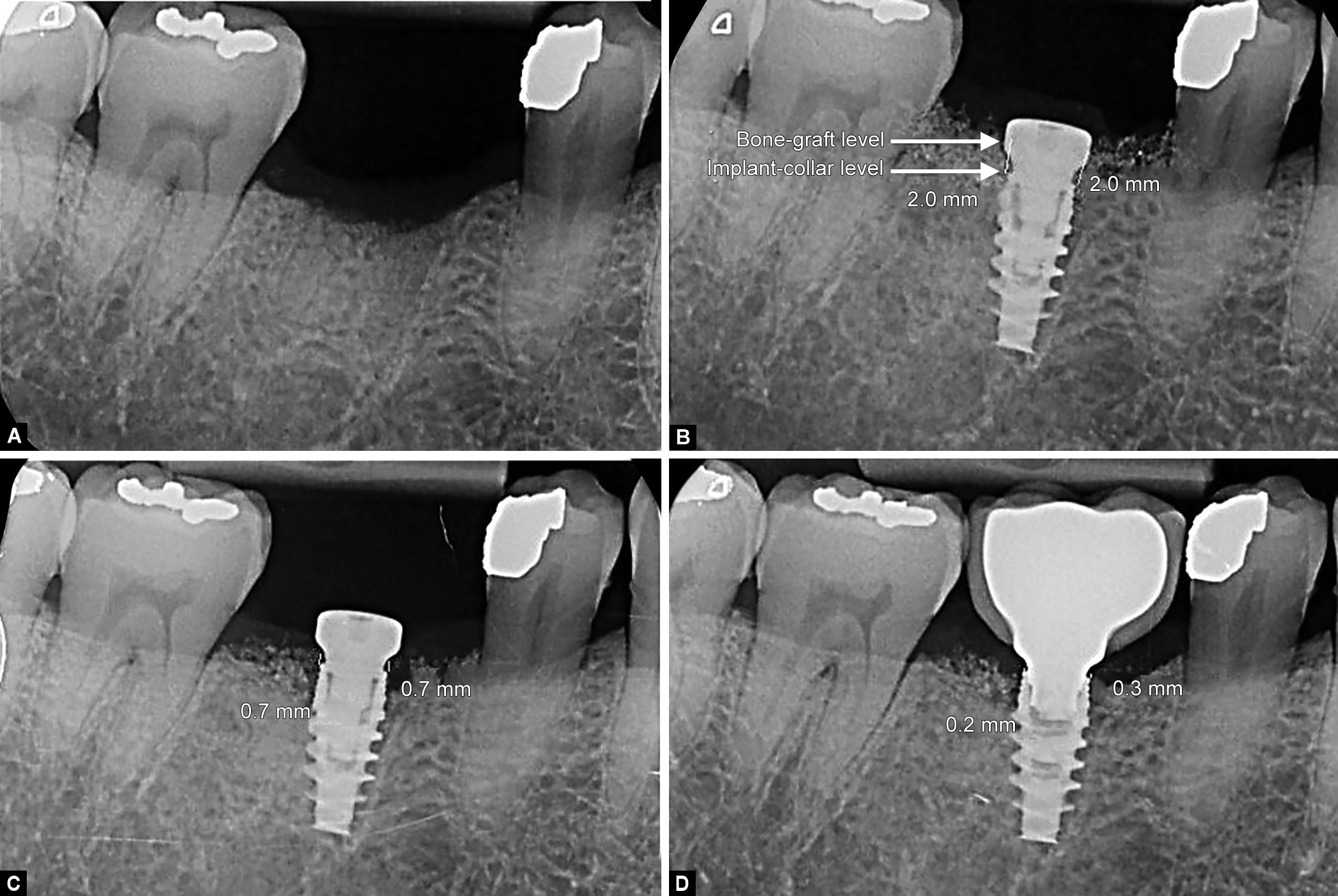 Figs 1A to D: (A) Preoperative IOPA; (B) Immediate postoperative IOPA. Note the level of measurements taken from crestal bone level to implant collar on both sides of implant; (C) After 3 months IOPA; (D) After 6 months IOPA

The SPSS software version 23.0 (SPSS Inc; IBM) was used for data analysis. The changes in the marginal bone resorption and residual alveolar crestal bone height among both the groups were evaluated using a one-way analysis of variance (ANOVA), followed by post hoc Tukey Honestly Significant Difference (HSD) test with a significance level of 5%.

The objective of ridge preservation procedures using bone grafts is to prevent the atrophy of alveolar ridge as well as to preserve sufficient bone volume in order to promote the dental implant placement in prosthetically acceptable site or to preserve an admissible ridge contour for the purpose of esthetic concerns. This retrospective study evaluates the effectiveness of bone graft materials used in implant dentistry namely allograft and xenograft. Crestal bone level changes are one of the important parameters to evaluate the efficiency of any graft material used in dental implant treatment. The result of the present study showed bone loss even after the use of allograft or xenograft materials, which was predicted and consistent with several studies.3,9–12 The measurements were done with digital software with 0.1 mm of the least count to minimize the measurement errors.

Several studies showed a positive result of ARP for limiting both horizontal and vertical bone dimensional loss compared to a spontaneous socket healing of the alveolar ridge.3 In a recent study, ARP performed in the posterior maxilla with a combination of allograft and collagen membrane resulted in 1.0 mm crestal height reduction and in approximately 2.5 mm loss of alveolar ridge width. This volumetric contraction was lower than the one observed in extraction sites of the same area after spontaneous healing.15 Iasella et al. showed that preservation of alveolar ridge using freeze-dried bone allograft and collagen membrane resulted in less alveolar ridge loss compared to extraction alone (1.2 ± 0.9 vs 2.6 ± 2.3 mm). Both allografts and xenografts partially preserved the width and the interproximal bone height of the alveolar ridge.12

Although a decrease in the alveolar ridge height was observed in both groups, both bone graft materials were considered satisfactory in terms of allowing the placement of dental implants. From baseline up to 6 and 8 months interval, the loss of bone was within the normal range of 1–2 mm for the sites treated with both xenografts and allografts, which were in agreement with Ten Heggeler et al.16 In a clinical study by Mendez et al, healing of allografts and xenografts for alveolar ridge preservation was compared by measuring the vertical and horizontal bone dimensions at baseline and 6 months later.3 The results at the allografts sites (−0.6−0.5 mm) appeared to have less resorption compared to that at the xenograft sites (−1.1−(−0.4) mm). This has corroborated the results of the present study when the measurement was taken after 6 months: allograft sites (0.42−1.38 mm) and xenograft sites (0.90−1.61 mm). However, at 8 months interval, allograft sites (1.55−2.11 mm) showed higher resorption than xenograft sites (0.91−1.83 mm).

However, the study had limitations. There were only 77 implant-grafted sites finally included under the inclusion/exclusion criteria. There was also a bias toward the number of patients receiving xenografts than allografts. As the follow-up times for the patients were different, the final time intervals had to be divided further into 6 and 8 months postoperative recall period, which could have influenced the results of this study. Radiographs taken may be of different angulations and positions at different time intervals, which would also affect the results of this study. Future direction of research should include a larger sample size with a more uniform number of sites for each group. The follow-up time for each patient should be standardized as well to provide more conclusive evidence. As autografts and alloplastic grafts were not included in this study and future studies should compare the efficacy of these bone-grafting materials as well. The radiographs showing more than 1.5 mm of discrepancy in overall length of the implant appearing in the IOPA radiograph were not included in the research to minimize the measurement errors in this retrospective study. Measurements can be normalized with the formula given by Patil et al.18 Clinical point of view, both allografts and xenografts are suitable for the preservation of the alveolar ridge in regard to crestal bone level changes. Selection of allografts and xenografts may not be carried out based upon the crestal bone level changes. Other parameters like quality and speed of the tissue healing, bone density of the healed sites, and implant stability can be evaluated to evaluate efficacy/outcome of graft materials in future.

Within the limitations of this study, following conclusion can be drawn. The crestal bone level changes are comparable with both allografts and xenografts, as no statistically significant differences were found. Hence, from a clinical standpoint, both allografts and xenografts are suitable for the preservation of the alveolar ridge regarding the crestal bone level changes.