Aim and objective: In this study, we quantified the color of brackets and archwire appliances for an objective evaluation and investigated its relationship with subjective esthetic evaluation.

Materials and methods: Five types of commercially available brackets (ceramic brackets C1, C2, and C3; plastic brackets P1 and P2) and three types of archwires (coated nickel-titanium archwires W1, W2, and W3) were used. The reflectance (%) and color (lightness: L*, hue: a*, b*) of each sample were quantified using a spectrophotometer (n = 5). Fifteen combinations of brackets and archwires were used. The esthetic evaluation was performed using the visual analog scale (VAS) method, and responses were obtained from 30 laypersons and 15 orthodontists. The mean VAS score was calculated, and the relationship between the reflectance and color of the bracket and archwire was discussed.

Conclusion: Our results showed that as the lightness and reflectance of the brackets and archwires increased, the subjective evaluation concerning their esthetic value was higher.

Clinical significance: It is extremely difficult to evaluate esthetics despite the fact that patients’ demands for esthetics have been increasing in recent years. If a method for evaluating esthetics is established, it should help in the development and selection of esthetic devices. The results of this study will facilitate the development of future study designs.

Concerning bracket appliances, esthetic brackets have been commonly used since the 1980s.3 Esthetic brackets have since been produced from ceramics and plastics and have been widely used in orthodontic practice.4,5 The introduction of esthetic orthodontic brackets may have partially solved the esthetics issue facing multibracket devices worn on the labial surfaces of the teeth. During the 1990s, silicone-reinforced nylon-based archwires with silica cores became commercially available to improve esthetics and attracted attention. However, these appliances failed to demonstrate sufficient mechanical properties clinically, and metal archwires incorporating materials such as nickel-titanium and titanium-molybdenum alloys and stainless steel remain the most widespread products in use. Coated metal archwires and fiber-reinforced archwires have recently been introduced to resolve esthetic concerns associated with archwire appliances.6 The most common coatings are plastic resins, such as epoxy, and synthetic resins, or rhodium.7 Fiber-reinforced archwires are experimental and not a universal solution, but this technology holds promise for the future.8

However, the assessment of esthetic value is based on human sensibilities. It is difficult to evaluate esthetics directly and quantitatively as this quality depends largely on the evaluator’s subjective preferences. The visual analog scale (VAS) is a tool used to measure subjective characteristics and attitudes that cannot be measured directly. Although it can be used to evaluate the esthetics of orthodontic appliances, it does not reveal which factors influence the esthetic perception of brackets and archwires. Therefore, this study focused on the color of bracket and archwire appliances; from an esthetic point of view, the color of the archwire should ideally match the color of the tooth and bracket. One of the three tools, a spectrophotometer, a colorimeter, digital photographic analysis, or a combination of these tools, is commonly used to examine the color.9 Color analysis in dentistry is generally defined by the CIELAB color space proposed by the Commission Internationale de l’Eclairage.10 This system is one of the most common and universally used systems in dentistry, and many authors have used it to assess the perceptibility of color differences.11,12 If a relationship is found between the evaluation of color using this color space and the subjective evaluation of esthetics using the VAS method, this relationship is likely to have value in informing the future development of esthetic orthodontic appliances.

The color of each sample product was measured using a UV–visible spectrophotometer (UV-2600, Shimadzu Corporation, Kyoto, Japan) and an integrating sphere (ISR-2600 Plus, Shimadzu Corporation, Kyoto, Japan). The powder sample holder of the integrating sphere was filled with barium sulfate, and the sample was placed in the center of the holder for measurement. Diffuse reflectance was measured in 1 nm steps over a wavelength range of 350–800 nm, and the average value in the visible light range (450–750 nm) was used in subsequent comparisons. Colors were measured according to the CIELAB color system13 with a lightness scale (L*) and two opposing color axes (a* and b*) (n = 5). Reddish and greenish tones are represented by a* values, whereas yellow and blue tones are represented by b* values.

Each bracket was bonded to the anterior teeth (16th from the upper right canine to the upper left canine) of an epoxy jaw model (D16FE-500A; Nissin Dental Products Inc., Kyoto, Japan). Ortho Solo (Ormco, Brea, California, USA) and BeautiOrtho Bond II Flowable Paste (Shofu Inc., Kyoto, Japan) were used for bonding according to the clinical bonding process. Each archwire was ligated with a transparent elastomeric ligature (Elastic Ligature Tie Clear, Shofu Inc., Kyoto, Japan) and photographed (D7000 + AF-S Micro NIKKOR 85 mm 1:3.5G ED, Nikon Corporation, Tokyo, Japan). The imaging parameters, ambient light, and lighting remained constant. There were 15 bracket and archwire combinations (Fig. 1). The photographs were randomly presented to the evaluators that a total of 30 laypersons and 15 orthodontists, and the esthetic evaluation using the VAS method was performed using an iPad (Apple, Cupertino, California, USA) with the VasQ Clinical application for iPad (BottleCube, Tokyo, Japan). Each image was displayed for 10 seconds, followed by a 5-second evaluation period, after which the system automatically proceeded to the following image. The scale for evaluation ranged from “not good at all” to “extremely good” on a scoring scale of 0–10.

Fig. 1: Fifteen pictures for the bracket/wire combination were prepared. Identifiable information such as letters of pictures was excluded from the actual survey

IBM SPSS Statistics 26 (IBM, Chicago, Illinois, USA) was used for all statistical analyses. A one-way analysis of variance and Tukey’s test (p <0.05) were used to compare the VAS scores within the layperson and orthodontist groups. The t-test (p <0.05) was used to compare the VAS scores between the layperson and orthodontist groups. Pearson’s product–moment correlation coefficient was used to examine potential correlations between all parameters used in this study. As the VAS score was assessed by the combination of the archwire and bracket appliance used, all questions pertaining to the applicable archwire and bracket appliances were included in the test. 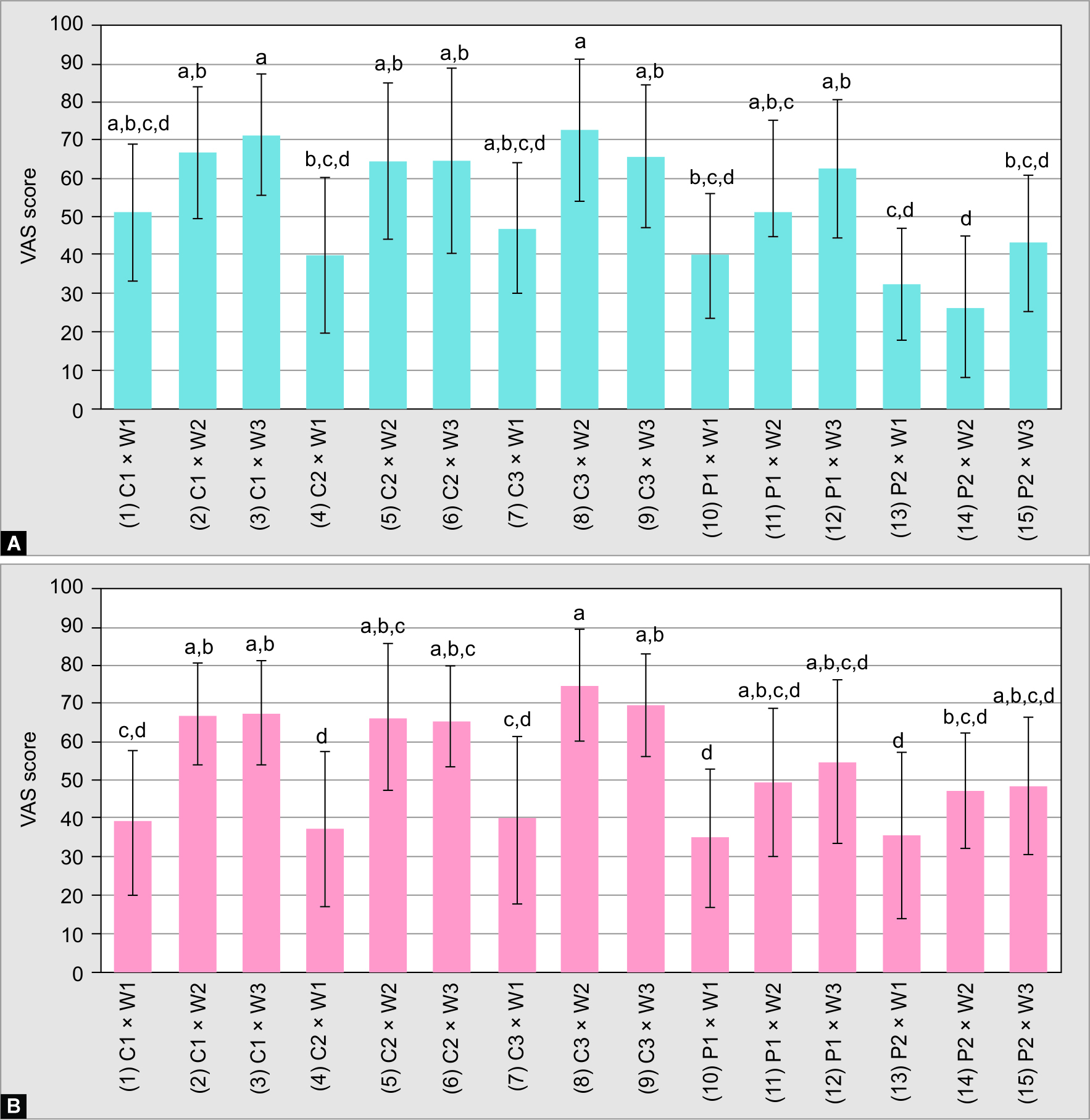 Figs 2A and B: VAS score results by a survey of: (A) Layperson group; (B) Orthodontist group. Identical letters indicate that mean values are not significantly different (p <0.05, Tukey’s test) 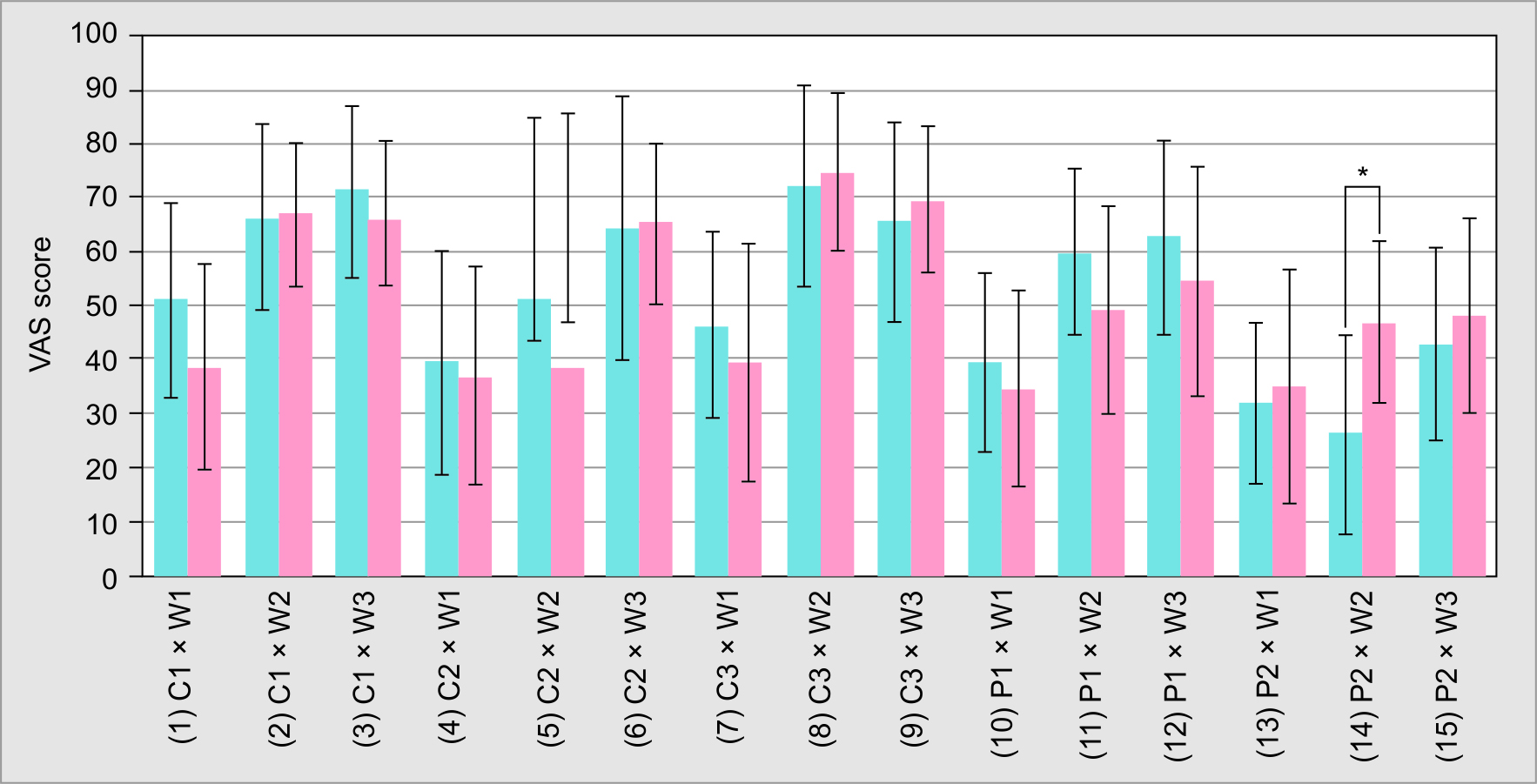 The VAS scores varied depending on the combination of appliances. However, as a result of comparing the ratings between the layperson and orthodontist groups, there was no significant difference with respect to the majority of combinations. In addition, there was a significant positive correlation at the 1% level between the VAS scores of the layperson and orthodontist groups (r = 0.853), suggesting that the trends in esthetic rating were similar between the two groups. Only combination (14) showed a predominantly lower VAS score for the layperson group evaluation than for the orthodontist group evaluation. This may be attributed to the specialized knowledge possessed only by orthodontists regarding the metal slot built into the esthetic bracket. The P2 bracket incorporates a stainless steel slot reinforcement to reduce friction in the archwire and ensure that the archwire’s torque is fully transmitted to the teeth, even as the polymer degrades due to water absorption. The orthodontists understood why this stainless steel component was incorporated into the appliance and were familiar with it in daily clinical use, so they may not have appreciated its potential perception as esthetically unpleasing.

Additionally, the W2 archwire had the highest L* and reflectance. The archwire with the highest lightness combined with the stainless steel slots with the lowest lightness may have resulted in the greatest contrast in lightness and, therefore, a lower rating by the layperson group. The orthodontists were familiar with the structure and configuration of the brackets, and as such, even if the contrast in lightness was high, the orthodontists would not have rated such appliances as less esthetic.

In discussing the results of this study, it is necessary to address the limitations of the study’s design. In this study, brackets and archwires were placed on the maxilla on an oral model for clinical use, and sample photographs were prepared by applying standardized photography methods. This study design aimed to provide more uniform and standardized photographs using multiple bracket and archwire sample combinations. However, other factors that affect esthetics (e.g., lips, saliva, mandibular teeth, tooth coloration, and mucosal coloration) must be compared using the actual oral cavity for accurate reproduction. Replacing the bracket samples in the actual oral cavity imposes a great burden on the patient and causes concerns regarding damage to the teeth and perioral tissues. Although preparing as many subjects as the number of sample combinations would reduce the burden on the patient, differences in the morphology, coloration, and occlusion of the teeth and surrounding tissues are also thought to directly affect the esthetic evaluation.

Furthermore, comparisons regarding esthetic evaluations between studies are very difficult to perform due to variations in the natural color of tooth enamel according to race, age, and gender, and the color parameters vary depending on the colorimetric protocol used.15 In addition, because the orthodontic appliances are implanted in the oral cavity for long periods due to their characteristics, differences in materials and structures should result in different changes over the implantation period. Akyalcin et al. stated that when comparing plastic and ceramic brackets, plastic brackets were the most affected by color changes.16 Therefore, it can be readily inferred that the difference in esthetic evaluation results between ceramic and plastic brackets increases over time.

Up to now, no research has been done to quantitatively evaluate the esthetic properties of brackets and archwires in combination in the laboratory. As mentioned previously, a suitable study design for the comparative evaluation of the esthetic quality of orthodontic appliances is a subject for future research. In this study, the morphology and color tone of the teeth and surrounding tissues were standardized, and only the combination of archwire and brackets was changed in the photographs. This allowed for comparisons to be made under standardized conditions. These findings will provide useful information for the development of future orthodontic appliance study designs.

The results of the esthetic evaluation of orthodontic appliances using photographs revealed that the higher the lightness and reflectance of the brackets and archwire, the higher the subjective evaluation.