Evaluation of Free Available Chlorine of Sodium Hypochlorite When Admixed with 0.2% Chitosan: A Preliminary Study

Aim and objective: The aim of the study was to evaluate the changes in free available chlorine (FAC) when 6% sodium hypochlorite (NaOCl) is admixed with irrigants 17% ethylenediaminetetraacetic acid (EDTA), 2% chlorhexidine (CHX), and 0.2% chitosan in varying proportions of 90:10, 80:20, and 50:50.

Conclusion: Combination of NaOCl and chitosan did not lead to a reduction in FAC and the pH of the solution remained unaltered, suggesting that tissue-dissolving property of NaOCl might be preserved.

Clinical significance: The combination of chitosan with NaOCl is advantageous in two ways. Firstly, FAC remained unaltered and the pH of the solution was also maintained at 11.05 indicating that the tissue-dissolving property of NaOCl prevailed. Secondly, chitosan is known for its chelating property and is effective in smear layer removal. With further in vivo and in vitro studies, a combination of chitosan and NaOCl can be proposed as a novel irrigant.

Sodium hypochlorite (NaOCl) has a better tissue-dissolving potential and antibacterial properties, so it is one of the most widely used irrigants.1 pH of the NaOCl solution determines the active form, i.e., hypochlorous acid (HOCl) or hypochlorite ion (OCl−) that is available, as a whole account for the free available chlorine (FAC) content of NaOCl. The FAC of the NaOCl is responsible for protein degradation action and antibacterial property.2 The available chlorine of hypochlorite solutions appears to influence the caustic potential. Despite the good tissue-dissolving property of NaOCl, it is ineffective against certain microorganisms and smear layer. Ethylenediaminetetraacetic acid (EDTA) is a chelating agent which is effective in removing smear layer from root canals.3 No single solution is able to fulfill these actions completely; therefore, their combination is required. Hence, the suggested clinical protocol is the usage of irrigants such as EDTA and chlorhexidine (CHX) in conjunction with NaOCl.4 Unfortunately, such a combination of irrigants may lead to a decrease in the efficacy of NaOCl and also lead to the formation of precipitate that is considered to be toxic. Previous studies have shown that the FAC drastically reduced when EDTA was used in conjunction with NaOCl.2,5

The use of CHX with NaOCl has been advocated to enhance the antimicrobial properties. But the combination of CHX with NaOCl leads to the formation of a colored undesired precipitate and causes a drop in FAC of the solution.5

Over the past years, a new biopolymer, chitosan derived by the partial deacetylation of chitin obtained from crustacean shells has been introduced for root canal irrigation.6,7 It has been reported to remove the smear layer and inhibit bacterial recolonization when used as a final irrigant during disinfection of the canal system.8

The effect of some secondary irrigants such as EDTA and CHX on FAC of NaOCl has been investigated. Interaction of NaOCl and chitosan on the FAC remains unknown.

On that account, a preliminary study was carried out with the aim to evaluate the changes in FAC when 6% NaOCl is admixed with irrigants 17% EDTA, 2% CHX, and 0.2% chitosan.

The study was conducted at the Department of Biochemistry, KLE Society’s Institute of Dental Sciences, Bengaluru, Karnataka, India.

The secondary solutions were as follows:

The test sample solutions were made according to the previous study by Krishnan et al.2 Baseline FAC of the primary solution was first established from a mean of three iodometric titrations independently. Then immediately after mixing, FAC content of the mixtures was established. A 25 mL fraction of experimental test group solution in all three different ratios was assessed by iodometric titration and the average of three titrations was considered.

Steps in Iodometric titration were as follows:

During iodometric titration, a starch solution was used as an indicator since it can absorb the iodine that was released. This absorption caused the solution to change its color, from dark blue to a colorless state when titrated with a standardized thiosulfate solution. This indicated the end point of the titration. The amount of Iodine liberated is directly equal to the amount of FAC.

pH estimation: A digital pH meter (Systronics) was used to record the pH of the experimental solutions. Test solutions were admixed in 50:50 concentration and the pH was estimated soon after mixing before the start of iodometric titration.

The baseline FAC of the primary solution (NaOCl) of 1.99 g% was obtained. There was a statistically significant decrease in FAC when NaOCl was admixed with the secondary solutions even at varying proportions.

There was a drastic drop in FAC at all the different proportions immediately after mixing.

The 50:50 proportion of CHX with NaOCl resulted in a drastic drop in FAC.

In our current experiment, the pH of the test solutions at 50:50 concentration was measured to simulate the clinical method of 50:50 admixtures of irrigants. This was measured using a digital pH meter (Systronics) and the values recorded were as follows:

FAC is defined as a measurement of oxidizing capacity. Sum of the HOCl and OCl− concentrations in the NaOCl solution constitutes the FAC. HOCl, a stronger oxidant than the (OCl−), is accountable for the strong chlorinating and oxidizing action on tissue and microorganism.8,9

In spite of the fact that NaOCl appears to be the most desirable single endodontic irrigant, it cannot dissolve inorganic dentin particles and is not efficacious in smear layer removal.10 Therefore, the use of other irrigants in conjunction with NaOCl has been proposed, but such a combination leads to a reduction in FAC.

The effect of dilution and a chemical reaction between the irrigants could be the reason for a reduction in FAC in these admixtures.2,11 For this reason, FAC of independent 6% NaOCl solution was measured prior to mixing with secondary solutions and then the effect of dilution of NaOCl with distilled water was recorded (Fig. 2A). Thus, any further loss in FAC of these admixtures would probably indicates a chemical reaction occurred between the primary and secondary irrigant solutions.2,11 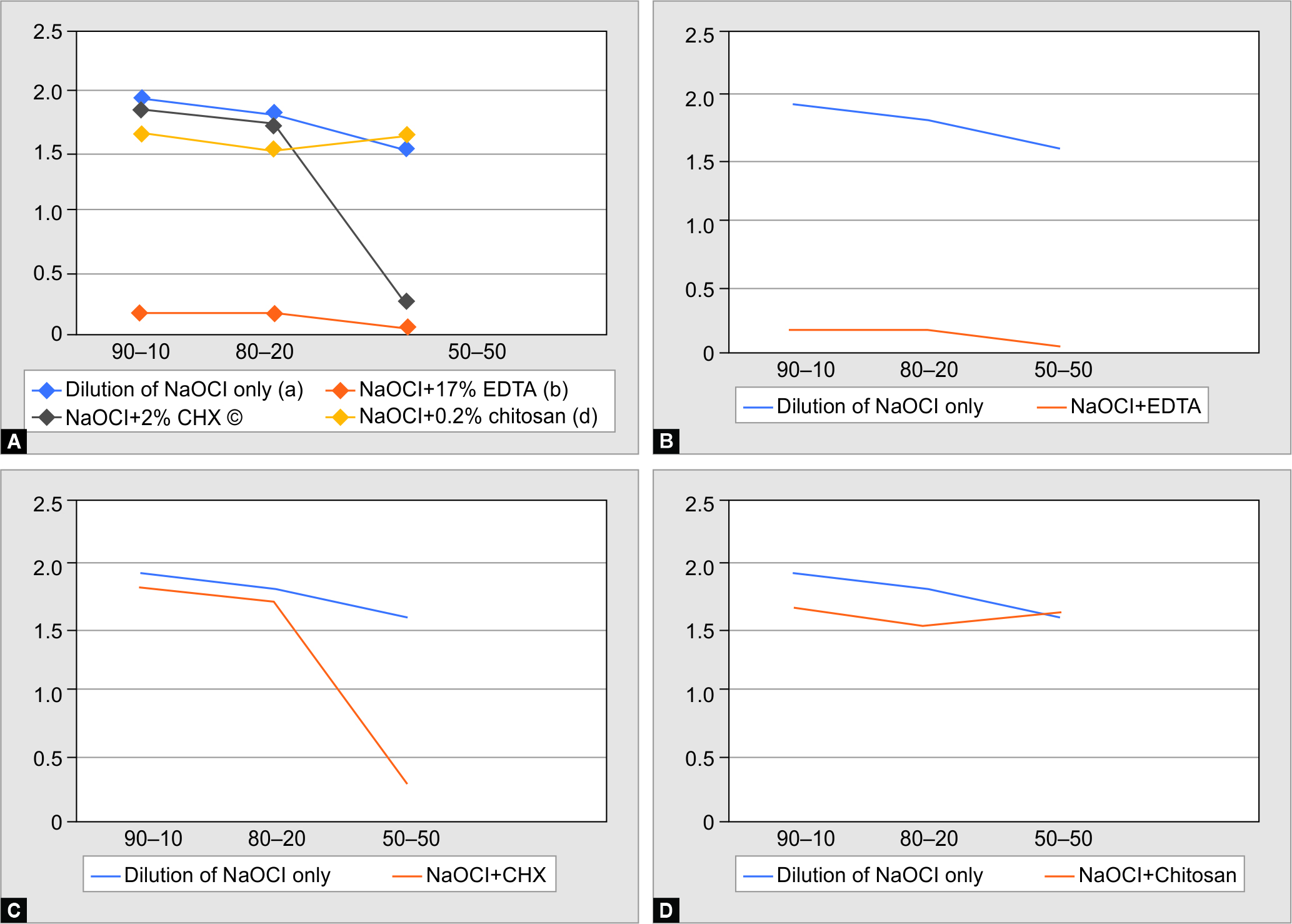 When NaOCl was combined with EDTA, an exothermic reaction took place with a rapid gas formation (Fig. 1A). The results of the present study showed that there was a rapid and dramatic decrease in FAC in all the experimental proportions (Fig. 2B). The results obtained are congruent with the previous research by Krishnan et al. and Clarkson et al.2,12 Due to this rapid loss in FAC, these irrigants must not be used concomitantly.12 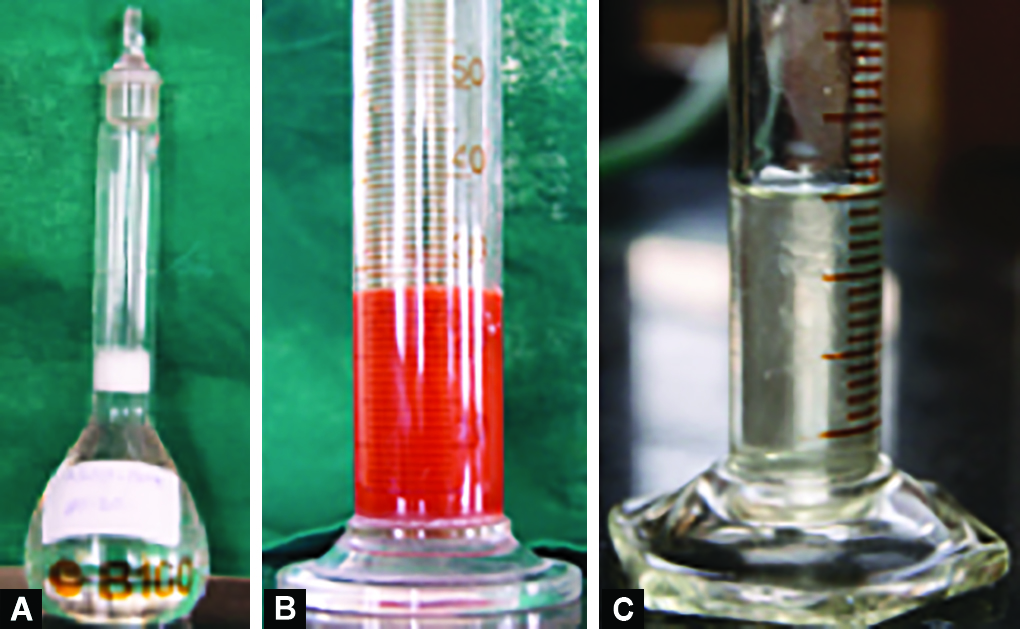 The combined use of NaOCl and CHX has been advocated to enhance their antimicrobial properties and is shown to provide substantivity.4 When these two irrigants were mixed, it resulted in an orange–red precipitate (Fig. 1B) as observed, Zehnder. Rossi-Fedele et al. have identified the precipitate as parachloroaniline, whereas Orhan et al. suggested that the obtained precipitate is chlorophenylurea based on spectroscopy studies.5,13 Concentration and admixture ratio had an effect on FAC and resulted in a significant drop in FAC at 50:50 proportion (Fig. 2C). The combination of NaOCl and CHX caused color changes and the formation of a neutral and insoluble precipitate, which may interfere with the seal of the root filling. Therefore, drying the canal with paper points before the final CHX rinse is suggested.14

Chitosan, a nontoxic cationic biopolymer, is obtained by alkaline deacetylation from chitin.6,7 Chitosan used in endodontics presents with the advantage of biocompatibility, chelating capacity, and also antimicrobial effects against a broad range of gram-positive and gram-negative bacteria as well as fungi.15 The rate of active chlorine loss that occurs when solutions of NaOCl and chitosan are mixed and the effect of different proportions of the admixture on active chlorine have not previously been reported. When chitosan was admixed with NaOCl, initial white turbidity was observed in the solution that disappeared soon (Fig. 1C). The mean difference in FAC after mixing chitosan was close to FAC obtained when NaOCl was mixed with distilled water (Fig. 2D). Reduction in FAC was not statistically significant in all three different proportions. Chitosan is a chelating agent with actions similar to EDTA. There was no undesirable precipitate formation with this admixture unlike that observed in a combination with CHX.

The properties of NaOCl are dependent on the pH of the solution. The pH varies significantly and ranges between 10.9 and 12.0. At pH values of 9 and above, OCl− predominates and tissue dissolution is maximized. HOCl is mostly present at the neutral pH and antibacterial ability is maximized,12 whereas pH of the primary solution (group I) was 11.27. In combination with EDTA (group II) and CHX (group III), the pH of the solution dropped to 9.55 and 10.87, respectively, which results in reduced efficacy of NaOCl. In contrast, with 0.2% chitosan, the pH of the solution was 11.05 indicating that the pH of NaOCl was not altered. This suggests that the tissue-dissolving property will prevail when NaOCl is used in conjunction with chitosan. Also, this combination might be advantageous than EDTA as properties of NaOCl remain unaltered because the FAC remained constant. Additionally, chitosan helps in effective smear layer removal. Further investigations can be carried out to evaluate the chemical reaction between NaOCl and chitosan and the antibacterial efficacy of this admixture and evaluation of change in pH with different proportions.

Within the limitations of the present study, it can be concluded that:

Limitations of the Study

This is a preliminary study; thus, the sample size was less. Quantitative methods such as fourier-transform infrared spectroscopy (FTIR) can be used to accurately measure the chlorine levels. pH at different concentrations could have been evaluated.

The combination of chitosan with NaOCl is advantageous in two ways. Firstly, FAC remained unaltered and the pH of the solution was also maintained at 11.05 indicating that the tissue-dissolving property of NaOCl prevailed. Secondly, chitosan is known for its chelating property and is effective in smear layer removal. With further in vivo and in vitro studies, the combination of chitosan and NaOCl can be proposed as a novel irrigant.