Long-term Management of a Patient with Apert Syndrome

Background: Apert syndrome is expressed as a severe and irregular craniosynostosis, midfacial hypoplasia, and symmetric syndactyly in the fingers and toes. For craniosynostosis syndromes, treatment planning is complex due to the disharmony between facial profile and occlusion.

Case description: A 4-year-and-5-month-old boy, diagnosed with Apert syndrome, showed a concave profile accompanied with midfacial hypoplasia, moderate exorbitism, a reversed occlusion of −10.0 mm, an anterior open bite of −5.0 mm, and skeletal class III jaw-base relationship. The patient, aged 15 years and 4 months, underwent a Le Fort III osteotomy, and subsequent osteodistraction was performed via a rigid external distraction (RED) device. His midfacial bone was advanced by approximately 7.0 mm. One year after the distraction, preoperative treatment with 0.018-in preadjusted edgewise appliances was initiated. Two-jaw surgery with a Le Fort I osteotomy and bilateral sagittal split ramus osteotomy was performed after 42 months of preoperative orthodontic treatment. At the age of 20 years and 9 months, his facial profile dramatically changed to a straight profile, and an acceptable occlusion with an adequate interincisal relationship was obtained. A functional occlusion with an excellent facial profile was maintained throughout the 2-year retention period, although the upper dental arch width was slightly decreased, resulting in the recurrence of the left posterior crossbite.

Conclusion: Our report indicates the necessity of long-term follow-up in patients with craniosynostosis because of syndrome-specific growth and methodologically induced relapse.

For craniosynostosis syndromes, treatment planning is complex due to the disharmony between the facial profile and occlusion. A single osteotomy is sometimes inappropriate for improving complicated skeletal discrepancies. Nowadays, distraction osteogenesis for maxillary advancement has been a common surgical technique for patients with skeletal mandibular protrusion caused by severe maxillary growth deficiency.6–9 The rigid external distraction (RED) system is comprised of the external distraction devices reported by Polley and Figueroa for the first time.7 This approach allows the management of these patients with promising functional and esthetic outcomes.7,9,10 Previously, we reported a 9-year follow-up of Le Fort III distraction osteogenesis via the RED device in a patient with Crouzon syndrome in which less or minimal relapse was found for long-term retention, implying a long-term stability of midfacial advancement with distraction osteogenesis.11

The purpose of this article is to present an Apert syndrome patient with midfacial growth deficiency treated with Le Fort III distraction osteogenesis and subsequent two-jaw surgery.

A 4-year-and-5-month-old boy visited the Department of Orthodontics, Tokushima University Hospital, with an introduction from the Department of Plastic Surgery. The patient complained mainly of masticatory disturbances associated with an anterior crossbite. He was prenatally diagnosed with Apert syndrome with a germline mutation of S252W in the FGFR2 gene, and no other family members showed a similar condition.12,13 He showed a concave facial profile with severe midfacial hypoplasia, and moderate exorbitism was noted (Fig. 1A). A reversed occlusion of −10.0 mm and anterior open bite of −5.0 mm were observed, and the terminal plane was mesial step type bilaterally (Fig. 1B). At birth, he had syndactyly of the hands and feet and underwent surgery several times to correct the deformed fingers.14 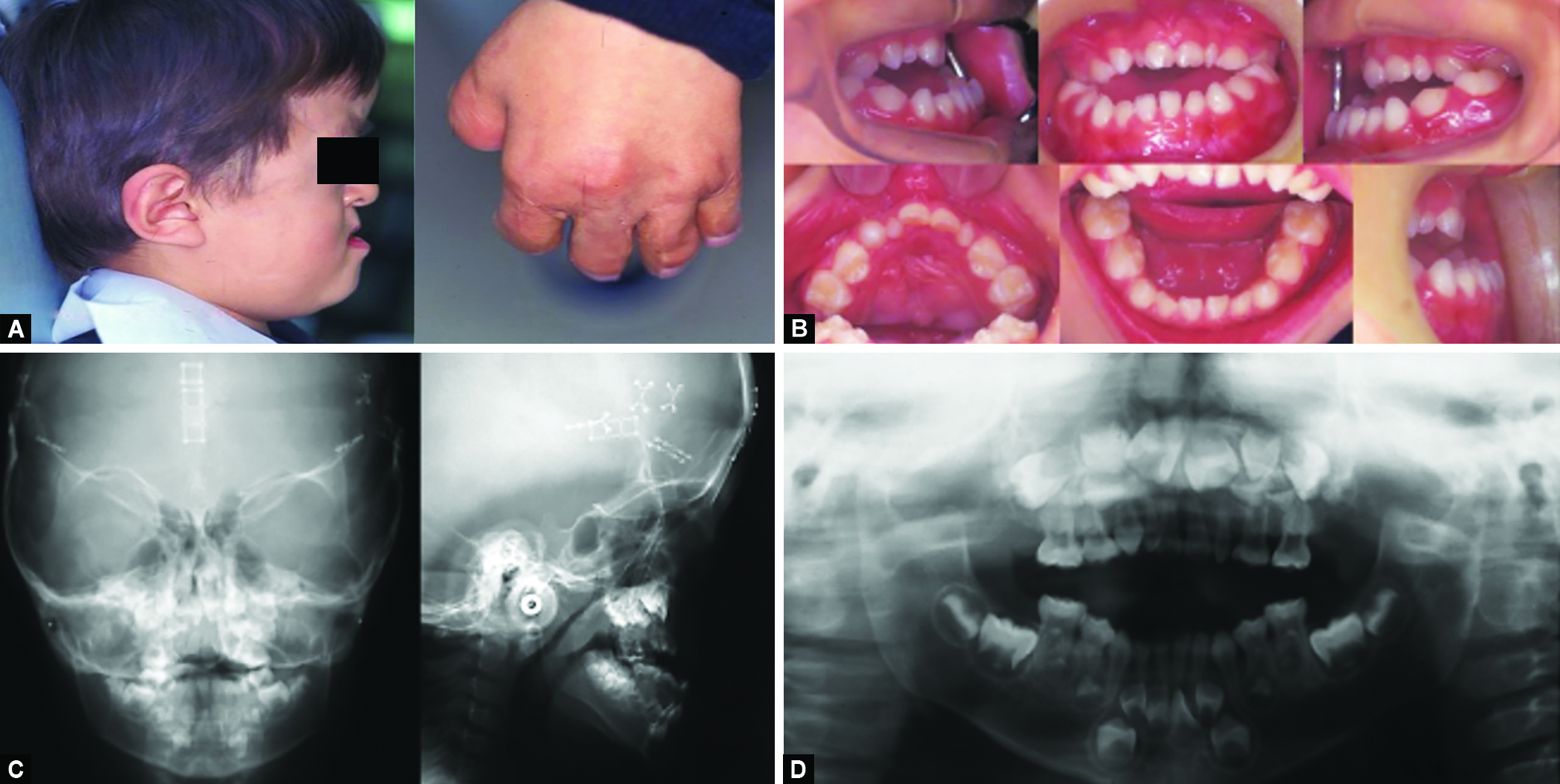 The patient was diagnosed with skeletal mandibular prognathism involving severe midfacial hypoplasia, a skeletal class III relationship, and a high mandibular plane angle tendency. The objectives of the treatment were (1) to improve a concave facial profile, (2) to correct the reversed occlusion and anterior open bite, (3) to accomplish an adequate interincisal relationship, and (4) to achieve an acceptable occlusion with good function. We then attempted to advance the midface with Le Fort III distraction osteogenesis after growth spurt, followed by maxillary and/or mandibular osteotomy after the end of growth.

Several surgical procedures have been developed to accomplish a functional and acceptable occlusion with a proper facial profile. Although early orthopedic treatment of a growth-deficient maxilla with reverse-pull headgear and chin cap may be considered an effective remedy to treat skeletal class III without surgical invasion, the nonsurgical procedure could not correct the severe skeletal discrepancy caused by midfacial hypoplasia associated with an Apert syndrome.

In this regard, a surgical orthodontic treatment was applied to improve skeletal discrepancy and obtain informed consent from the patient and his parents. For midfacial advancement, we chose either simple Le Fort III osteotomy or osteodistraction. Although traditional surgical orthodontic treatments may provide a good prognosis in growing patients with craniosynostosis; however, we selected distraction osteogenesis following Le Fort III osteotomy after his growth spurt for the following reasons: (1) the vertical discrepancy was significantly larger even at the initial stage, (2) obstructive sleep apnea and exorbitism were not so severe, and (3) the midfacial advancement was more expected in adolescence than in childhood. For the distraction device, we adopted a RED system because of its several advantages in comparison with the internal device: easy and secure placement of the device, feasibility of the protraction direction control, and no necessity for a second operation to remove the device.

Until the end of his active growth, we followed him with plaque and caries control. The patient, aged 15 years and 4 months, underwent a Le Fort III osteotomy, and the RED II system (KLS Martin, Tuttlingen, Germany) was fixed to the cranial bones simultaneously (Fig. 3). Midfacial advancement was initiated from 5 days after surgery and lasted for 18 days, resulting in approximately 7.0 mm advancement (Fig. 2). After completion of the midfacial advancement, the external device was kept in place for 4 weeks with rigid retention, and the facemask was worn for a further 7 months while sleeping. 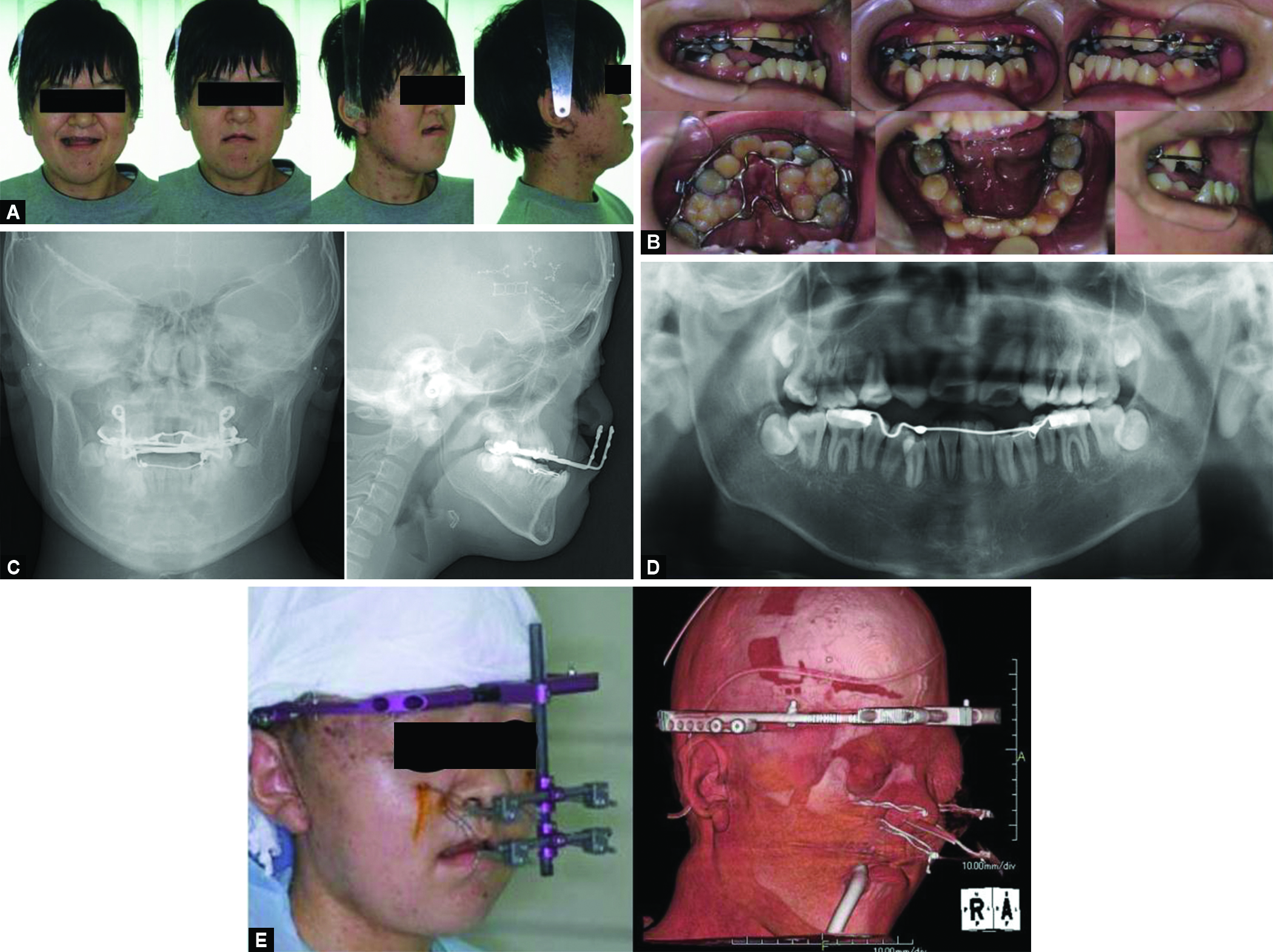 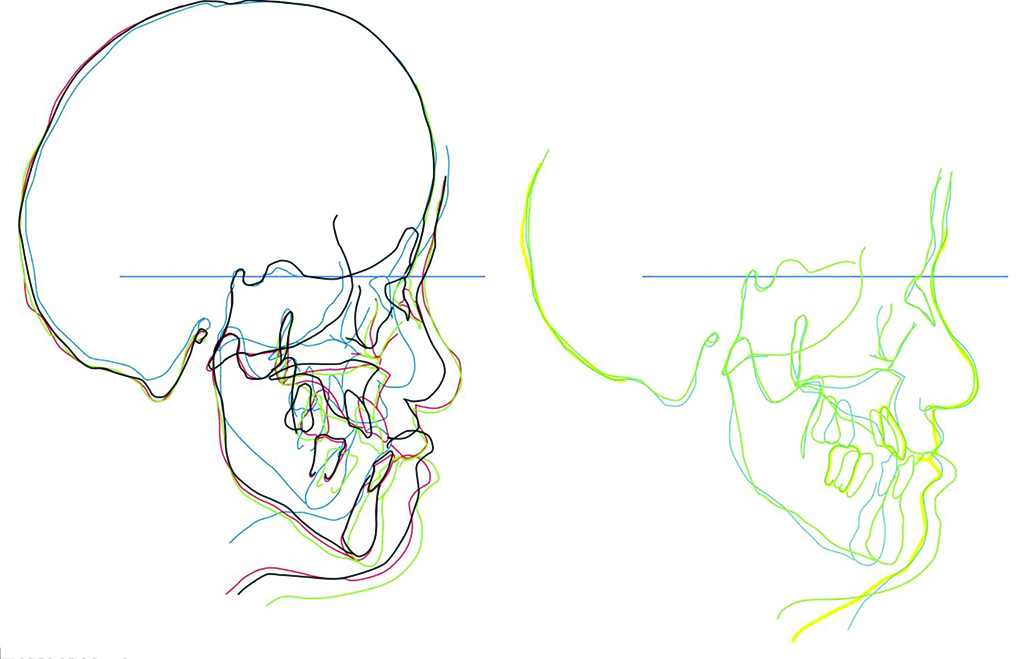 At the age of 16 years and 4 months, 0.018-in-slot preadjusted edgewise appliances were placed in both the maxillary and mandibular arches, and preoperative treatment was started (Fig. 4). Two-jaw surgery including a Le Fort I osteotomy and bilateral sagittal split ramus osteotomy was performed after 42 months of preoperative orthodontic treatment. At the age of 20 years and 9 months, postoperative treatment was completed and a functional and acceptable occlusion was achieved. Then, all the appliances were removed, and the metal retainer and circumferential retainer were applied to the maxillary and mandibular arches, respectively. The total active treatment period was 66 months.

After the Le Fort III distraction osteogenesis, the midfacial hypoplasia was drastically improved although the reverse occlusion still remained (Figs 4A and B). Cephalometric analysis after distraction osteogenesis revealed a nasal advancement of 6.5 mm at the nasion, maxillary advancement of 7.0 mm at the anterior nasal spine, and 7.5 mm at the posterior nasal spine against the reference line, which was defined as a line perpendicular to the sella-nasion plane through the sella (Figs 2 and 4C, Table 1). The value of the ANB angle increased from −11.6° to −5.3° (Table 1). However, during the preoperative treatment period, the distracted maxilla moved 1.0 mm backward and the late growth of the mandible was observed, resulting in the ANB value decreasing to −8.3° at the age of 19 years and 9 months.

As a result of active treatment, a functional and acceptable occlusion with an adequate interincisal relationship was achieved (Figs 5A and B). The mandibular protrusion was dramatically improved. Overjet and overbite increased to 3.0 and 2.5 mm, respectively. Panoramic radiograph revealed mild root resorption of the maxillary and mandibular anterior teeth (Fig. 5D). Cephalometric analysis revealed a maxillary advancement of 2.0 mm at the anterior nasal spine and a mandibular setback of 7.0 mm at the B-point to the aforementioned reference line (Figs 2 and 5C, Table 1). Since the mandible moved backward and upward, the value of the ANB angle improved from −8.3° to −2.3°. As a result, his midfacial hypoplasia and the resultant protrusive mandible were corrected.

After a 2-year retention, at 3.0 and 7.6 years after two-jaw surgery and maxillary distraction osteogenesis, respectively, the maxilla and mandible were anteroposteriorly stable relative to the reference line. Facial profile was acceptable and a functional occlusion with a proper interincisal relationship (overjet, 3.0 mm; overbite, 2.0 mm) was well maintained (Figs 6A and B); however, the maxillary dental arch width was decreased by 0.5 mm, resulting in the recurrence of the left posterior crossbite. Panoramic radiograph showed minimal changes in all teeth (Fig. 6D). Cephalometric analysis revealed a skeletal class I jaw-base relationship (ANB, 0.5°), and minimal changes in skeletal measurements were observed during the retention period (Figs 2 and 6C, Table 1).

Due to the large variation of surgical procedures available and the phenotypical variability of the syndrome, there are a wide variety of treatment outcomes and protocols for the management of the craniomaxillofacial deformity in Apert syndrome.16 At present, although the midfacial advancement with distraction osteogenesis following Le Fort II or Le Fort III osteotomy has been utilized in the current treatment algorithm of Apert syndrome, the optimal timing of surgical maxillary advancement for midfacial hypoplasia has been controversial. Posnick et al.17 demonstrated that early midfacial advancement is suitable for patients with craniodysostosis with obstructive sleep apnea and/or severe exorbitism. Oberoi et al.18 recommended midfacial advancement using standard Le Fort III with bone grafts or distraction osteogenesis at the age of 9–12 years if the individual’s cooperation allows. In addition, second-phase orthodontic treatment including orthognathic surgery after the end of the growth can be performed at the age of 12–21 years, if need be.18

The differences in the timing of midfacial advancement are discussed not only in terms of functional emergencies such as intraocular pressure and/or breathing, but also in terms of how the surgery affects the growth of the maxillary complex.18–20 When taking the individual growth and development into consideration to the maximum extent, the later the midfacial advancement is more beneficial, and the easier to predict the surgical outcome. Meanwhile, the early midfacial distraction is thought to have some advantages to reconstruct a large pharyngeal cavity, enlarge the airway, improve obstructive respiratory disorders, and to avoid tracheostomy.21 The decision of when to undergo surgery depends on a balance between the benefits of delaying surgery and the need to minimize any potential opposite effects on individual development from impaired ventilation, psychosocial disturbance, and severe exorbitism.22 The present patient, a classic case of Apert syndrome, underwent Le Fort III distraction osteogenesis at the age of 15 years and 4 months, followed by the two-jaw surgery at the age of 19 years and 10 months. Judging from previous studies,17,18 although the implementation time of the distraction osteogenesis was later, it would have been suitable for correcting the delayed mandibular growth that was unique to patients with craniodysostosis.23

It is generally essential to retain the vertical height of the midface during Le Fort III distraction osteogenesis as much as possible, because a downward movement of the maxillofacial complex accelerates the clockwise rotation of the mandible, resulting in the onset and impairment of the anterior open bite. In our patient, the mandible slightly rotated clockwise; however, it contributed to improving his deep overbite.

We report the long-term follow-up and surgical orthodontic treatment of a patient with Apert syndrome with midfacial hypoplasia and Le Fort III distraction osteogenesis before multibracket treatment and with two-jaw surgery including Le Fort I osteotomy and mandibular sagittal split ramus osteotomy after preoperative treatment. As a result of the two-stage operation, the facial profile was dramatically changed to the balanced profile, and a functional and acceptable occlusion with an ideal interincisal relationship was achieved. The functional occlusion with a balanced profile was well maintained throughout the 2-year retention period, although the maxillary dental arch width decreased, resulting in the recurrence of the left posterior crossbite. In conclusion, our results indicate the necessity of a long-term follow-up in patients with craniosynostosis.

Written informed consent was obtained from the patient for publication of this case report and any accompanying images.