Morphometric Assessment of Third and Fourth Cervical Vertebra Based on Hassel and Farman Method: A Radiographic Study

How to cite this article: Kulkarni NB, Dave BH. Morphometric Assessment of Third and Fourth Cervical Vertebra Based on Hassel and Farman Method: A Radiographic Study. J Contemp Dent Pract 2021;22(12):1457–1461.

Materials and methods: A cross-sectional radiographic study was conducted on 264 participants within an age-group of 7–18 years who were further categorized into six subgroups having an interval of 1 year and 11 months chronologic age. The maturation stage and morphometric evaluation of the cervical vertebra were assessed for the same patient. The maturation stage was assessed as per the morphologic classification given by Hassel and Farman. The morphometric evaluation was assessed by measuring the anterior (AH3 and AH4), vertebral body (H3 and H4), posterior heights, and anteroposterior width (APW3 and APW4) of third and fourth cervical vertebra in millimeters which was carried out with the help of “IC measure software.” One-way analysis of variance (ANOVA), Tukey’s multiple comparison, and Spearman’s correlation coefficient were utilized to determine the significance and correlation between the vertebral maturation and millimetric measurement between age-groups. The multiple comparison levels were set at 0.05 level of significance.

Clinical significance: The dimensions of anterior, vertebral, and posterior height of the third and fourth cervical vertebra can supplement in identifying the precise morphologic classification whenever there is an overlap in the opinion of staging cervical vertebral maturation based on Hassel and Farman.

Carnal maturation traits, stature, weight, and skeletal maturation are routinely used to recognize and scrutinize the stages of growth of an individual. Skeletal development is totally dependent on the form and shape of cervical vertebrae. Assessment of skeletal age is done by analyzing cephalogram rather than hand wrist radiograph in a routine clinical procedure to avoid excess radiation exposure.1–6

McNamara and Franchi pooled their understanding after staging many lateral cephalograms, a more detailed narration of portraying individual six stages of cervical vertebral maturation is required.8

Therefore, the aim of this study was to determine the interrelationship of the anterior, vertebral, posterior height, and anteroposterior width of the third and fourth cervical vertebra to the maturational stages of the cervical vertebra as per Hassel and Farman among 7–18 years individuals.

The guidelines of Hassel Farman’s method were carried out for assessing the maturational stage. Both the third and fourth cervical vertebra of all the patients were traced and matched to the most nearing stage of maturation (Fig. 1) for 30 lateral cephalograms, selected randomly. The millimetric measurement of both the vertebrae was measured using the digital software (“IC measure,” “Germany”) (Fig. 2). Before subjecting it to the maturational staging as per the Hassel and Farman’s method, Cohen’s kappa statistical test was carried out to assess the interobserver agreement between two judges. A value of 0.81–1.00 suggested an almost perfect agreement according to Cohen. A value of 0.85 was obtained. 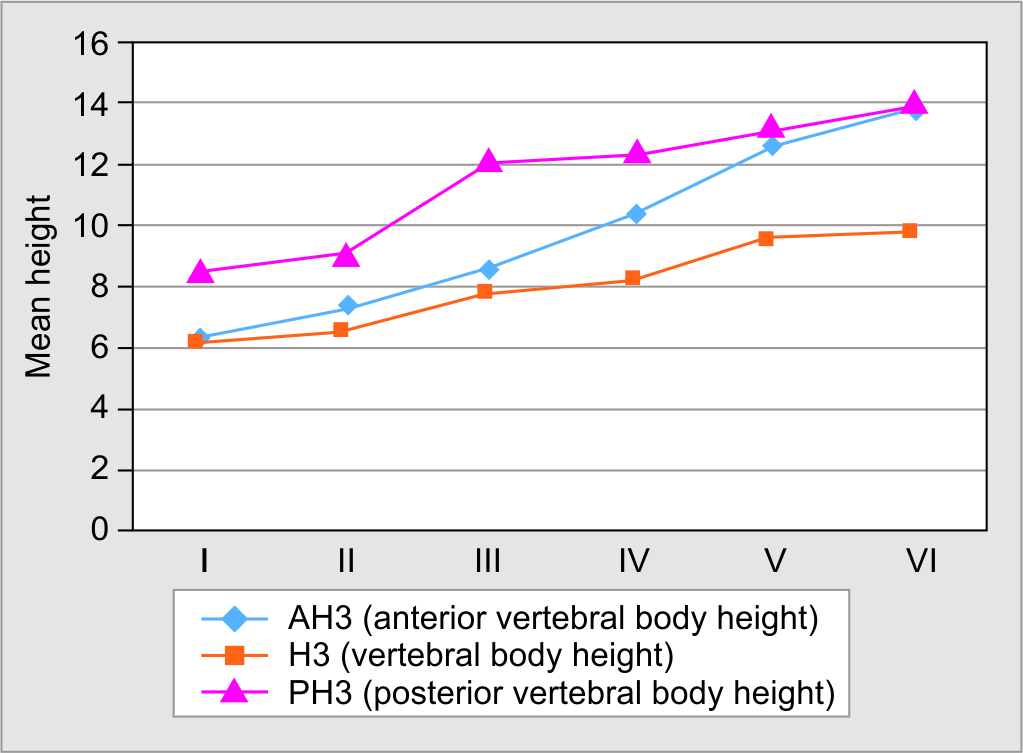 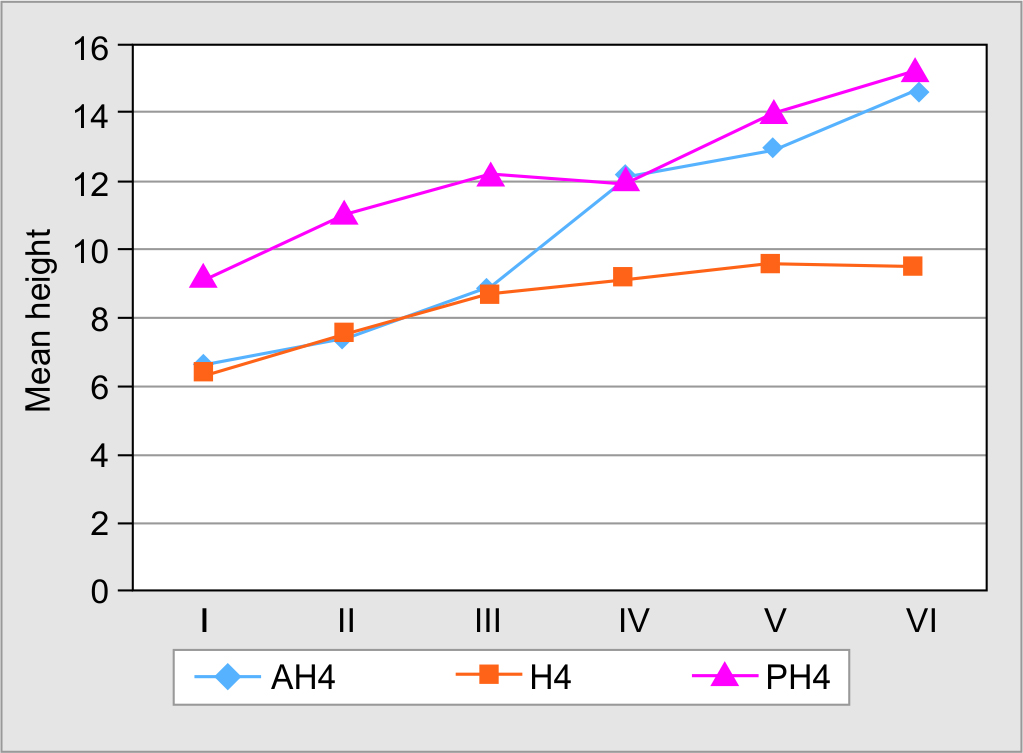 Mean and standard deviation were calculated for the third and fourth cervical vertebra in terms of the anteroposterior width (APW3, 4), anterior (AH3, 4), middle (H3, 4), and posterior height (PH3, 4), respectively. One-way ANOVA and Tukey’s post-hoc test were used to determine the significance. Mean plot was utilized to determine the variations of the sizes of the third and fourth cervical vertebra.

The analysis of the transition, maturation, and completion stage revealed that no moderate-to-high significant correlation was observed among all the parameters. 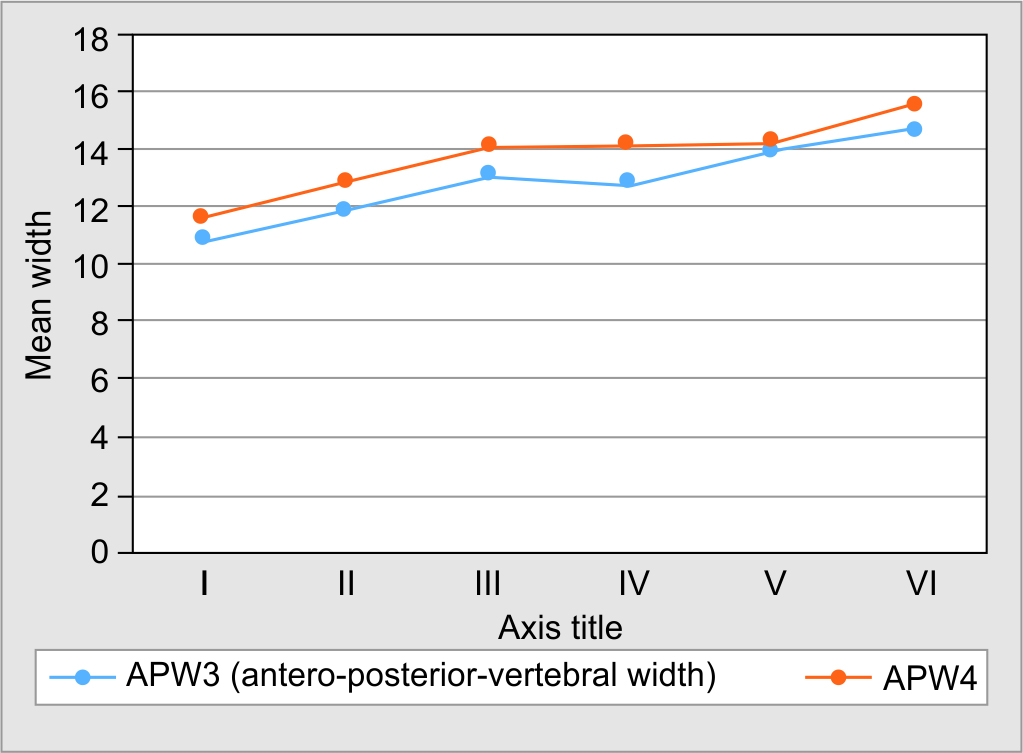 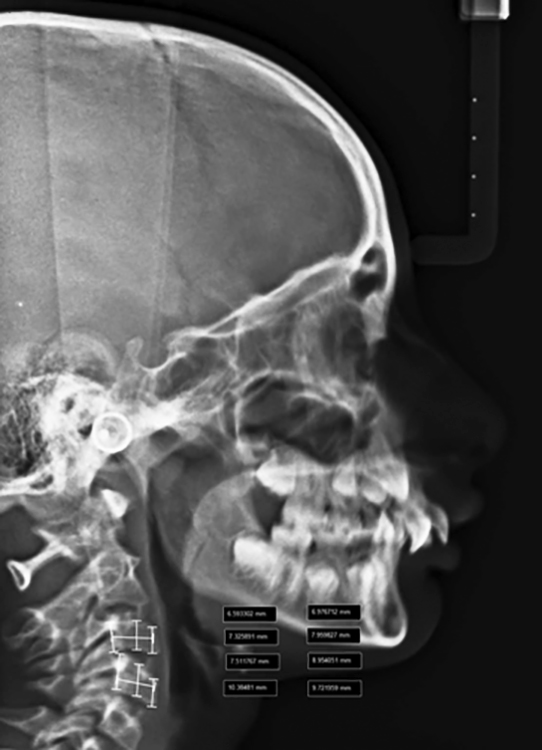 The growth of an individual is a consequence of the metamorphosis of a given bone according to his/her own rhythm of growth.11 Literature suggested that the metamorphosis of the cervical vertebra is subjected to the change in the shape and size from birth till maturity.2

As advocated by Baccetti et al., the morphologic changes of second, third, and fourth cervical vertebrae were adequate to assess skeletal maturation.5 For obtaining high diagnostic accuracy and intrarater repeatability in the visual assignment of the CVMI stages, it is important to get trained regularly.10

Skeletal maturity assessment plays a significant role in determining the treatment timing for correcting the skeletal relation utilizing the inherent growth potential of an individual. Tanner et al. depicted that the peak height velocity take place, on average, around 12 years in girls and 14 years in boys. Literature suggests that the maximum skeletal changes were observed during the maturation stages of transition and deceleration indicating the maximum amount of growth potential of an individual.14,15 Observations of this study were in harmony with the above-mentioned results.

The majority of the parameters revealed a positive moderately significant correlation in the stages of initiation, acceleration, and deceleration. In the initiation stage, a highly significant correlation was observed between posterior height and the anteroposterior width of the third cervical vertebra. Although a negative moderately significant correlation was seen between the anterior and posterior height for the fourth cervical vertebra in the deceleration stage, we could not find any literature to appraise the observations made in this study. A probable reason attributed for such an observation could be differential growth occurring in the vertebra as per the morphologic stages of maturation.3

An increase in dimension was observed with AH3, H3, and AH4 as the vertebrae maturation progressed from initiation to completion (Figs 3 and 4). The dimensions PH3 during the transition to deceleration stages and APW4 from the transition to maturation stages were observed to be relatively stable (Figs 3 and 5). The dimensions APW3 and PH4 decreased in the transition to deceleration stages (Figs 4 and 5); H4 in the maturation to completion stage (Fig. 4). We could not find any literature on this pretext to compare and correlate. Based on the observation of this study, it can be inferred that AH3, AH4, and H3 denoted a harmonious relation to morphologic classification as given by Hassel and Farman. Hence when any overlap of opinion exists while assessing the morphologic vertebral maturation, additional weightage should be given to the anterior dimensions of the third and fourth cervical vertebra.

The results of the present study should be interpreted cautiously as the design of the study involved analyzes of the data collected at a given point of time across a sample population or a predefined subset that limits investigating the growth of an individual. Further studies are required to determine the role of individual dimension in the individual maturational stages of morphologic classification employed for cervical vertebra.