Endodontic Treatment of a Molar with Peculiar Anatomy: Case Study with CBCT and 3D Printed Model

Aim: The aim of the study was to achieve the endodontic treatment of a second maxillary molar with abnormal anatomy through cone-beam computed tomography (CBCT) analysis and three-dimensional (3D) printing.

Background: A patient arrived referring recurrent abscesses, spontaneous pain, and the difficulty to eat properly; a diagnosis of tooth necrosis was made. The periapical X-ray showed an abnormal anatomy of the tooth.

Case description: The preoperative analysis of the tooth morphology was performed through CBCT analysis. The 3D scans were reconstructed through a dedicated software application (Mimics) to visualize the abnormal anatomy and detect the root canal morphology. Moreover, a 3D printed model was created to plan the clinical stage. Canal shaping was achieved with ProGlider and ProTaper Next techniques, and the root canal filling was performed with a carrier-based technique.

Conclusion: The limits of this case were the low definition of the CBCT owned by the patient and the difficulties during the scouting of the canals due to the abnormal endodontic space complicated by narrow and flat canals. The software reconstruction allowed a 3D high-definition preclinical analysis of the tooth anatomy.

In endodontics, it is important to determine a correct diagnosis and perform a precise evaluation of the case, in order to achieve an appropriate treatment and predictable outcome.1,2 Tooth morphological studies have demonstrated that many anatomic variations may occur during practice.3 A wide knowledge of root canal anatomy and its variations is very important to approach difficult cases and to succeed in endodontic treatment.4 Some anatomical aberration may result in great difficulties even when access the root canal system.5 Knowing the endodontic anatomy in advance may allow the clinician to choose the best shaping and irrigation technique; moreover, it gives the capability to recognize and deal with possible curvature, ramification, or calcification. Usually, the second maxillary molar conformation expects three roots in 90% of the cases, two roots in 9% of the cases, and one root in less than 1% of the tooth. The three-canal morphology is the most common one, more than 65% of the tooth on average; the four-canal conformation, 30% on average; and the c-shaped morphology, less than 5% of cases. Three-dimensional (3D) radiographic examination such as cone-beam computed tomography (CBCT) could help the clinicians in the treatment of these cases.6–9 It may be suggested to understand the complex endodontic anatomies reducing the risk of iatrogenic errors.10 By using CBCT, it is possible to study the root canal anatomy of the tooth with specific software, and the correct interpretation could be implemented with the use of 3D models. Resin-printed models have provided new possibilities to the clinicians to prepare and study difficult cases by prototyping the tooth anatomy. In endodontics, physical dental models have been used in several cases such as the diagnosis of atypical root morphology, the localization of root resorptions, the surgical planning for autotransplantation and endodontic surgery, and the manufacturing of dental guide to localize calcified canals.11–13 In the present case report, an anomalous diatoric tooth has been treated with the aid of CBCT software analysis and a physical tooth model obtained from radiographic 3D scans.14–17 In literature, there are not many studies that use physical resin model to plan in advance the treatment. Both the reproduction and the software segmentation demonstrated a great impact on the case planning and clinical treatment.

A 31-year-old man was referred to the endodontic department for the treatment of the second left maxillary molar. The patient required an emergency treatment as he referred recurrent abscesses, spontaneous pain, and difficulty to eat properly. The patient’s medical and dental statuses were collected: he referred neither previous treatment on the tooth nor trauma.

Pulpal and periradicular statuses of the maxillary molar were assessed through vitality, thermal and electric pulp tests (Diagnostic Unit; Sybron, Orange, California, United States), palpation, and percussion. Periodontal chart was recorded. Preoperative periapical X-ray examination was performed with XCP Rinn film holder (Dentsply Maillefer, Ballaigues, Switzerland) (Fig. 1). According to the recorded parameters of the vitality tests and the evidence of periapical radiolucency associated with pain at the percussion, a diagnosis of tooth necrosis was made. The periapical X-ray showed an abnormal anatomy of the tooth. The patient was already in possession of a CBCT examination prescribed less than 6 months before, which was studied to better visualize the complexity of the anomalous tooth. It was possible to appreciate a wide pulp chamber and the tooth could be divided into two “portions”: distal one presenting a big c-shaped canal and a peculiar radio-opacity similar to enamel among the c-shape and mesial one with two narrow canals linked with an isthmus (Fig. 2A). The CBCT was discussed and analyzed by experienced operators that followed a postgraduate course in endodontics and have more than 10 years of experience.

Figs 1A to F: X-rays before, during, and after treatment. (A) Preoperative X-ray; (B) Postoperative X-ray after composite reconstruction of the tooth; (C) Six-month control; and (D, E and F) Intraoperative working length X-rays 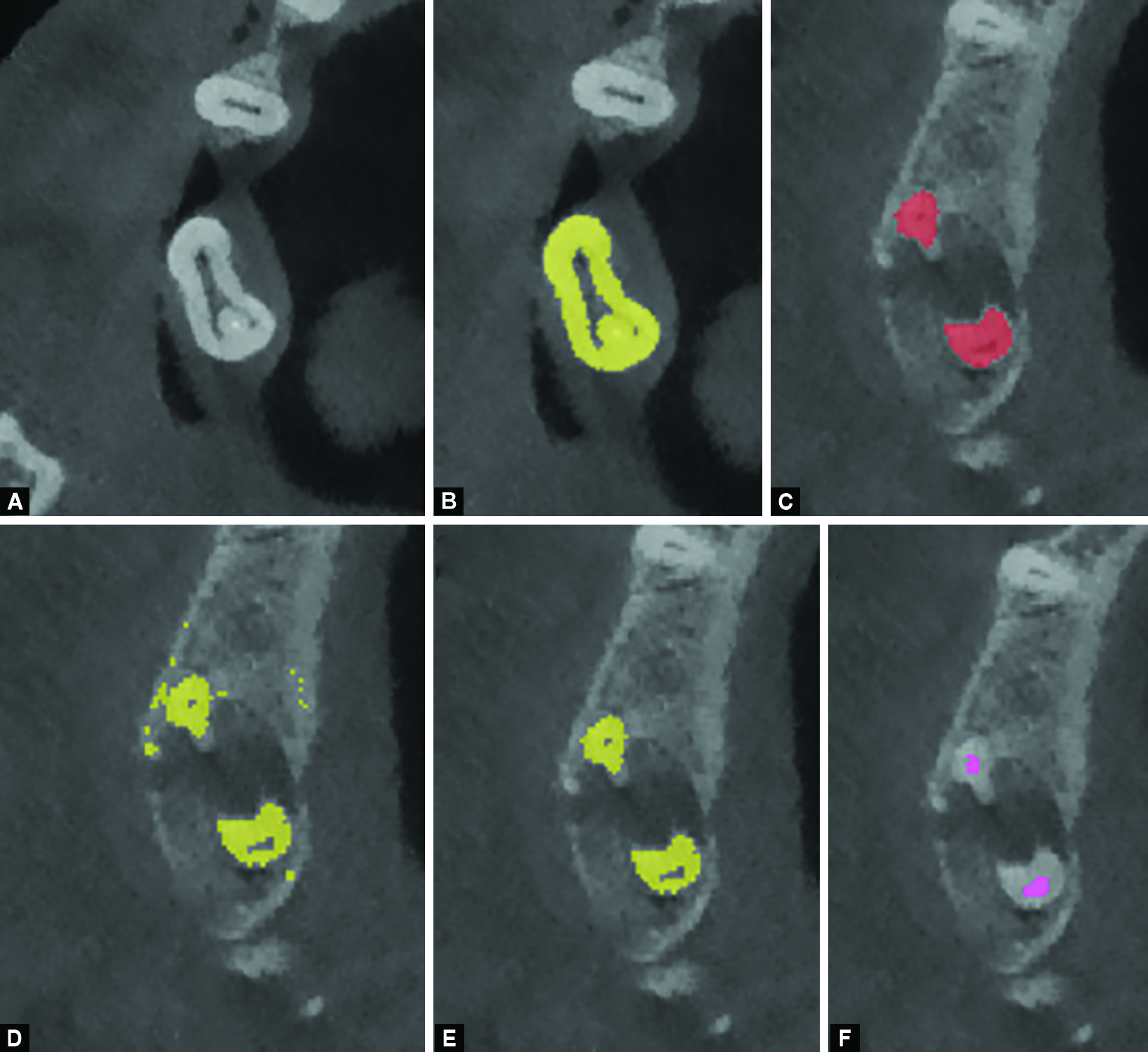 To better understand and analyze the complexity of the case, the digital imaging and communications in medicine (DICOM) files from CBCT were imported in a dedicated software application for segmentation (Mimics Medical 20.0 trial, Materialise; Leuven, Belgium). First, using thresholding function (range 1050/15383) dental tissues were separated from the bone. Remaining pixel noise was managed by selecting a proper ROI and through region growing function. Afterward, the tooth volume was filled with the close function to define a new ROI. Inside this second ROI, thresholding was performed again with a wide range (range 1,024/1,072) to segment the root canal system, which was not clearly visible in some slices. In order to better visualize and print the root canal anatomy, a calibrated expansion of the respective mask was performed (dilate = 1 pixel, 9-bit connection) (Figs 2A to F). After that, masks were converted into two separated volumes representing the root canal system and the tooth structure (Figs 3A and B). 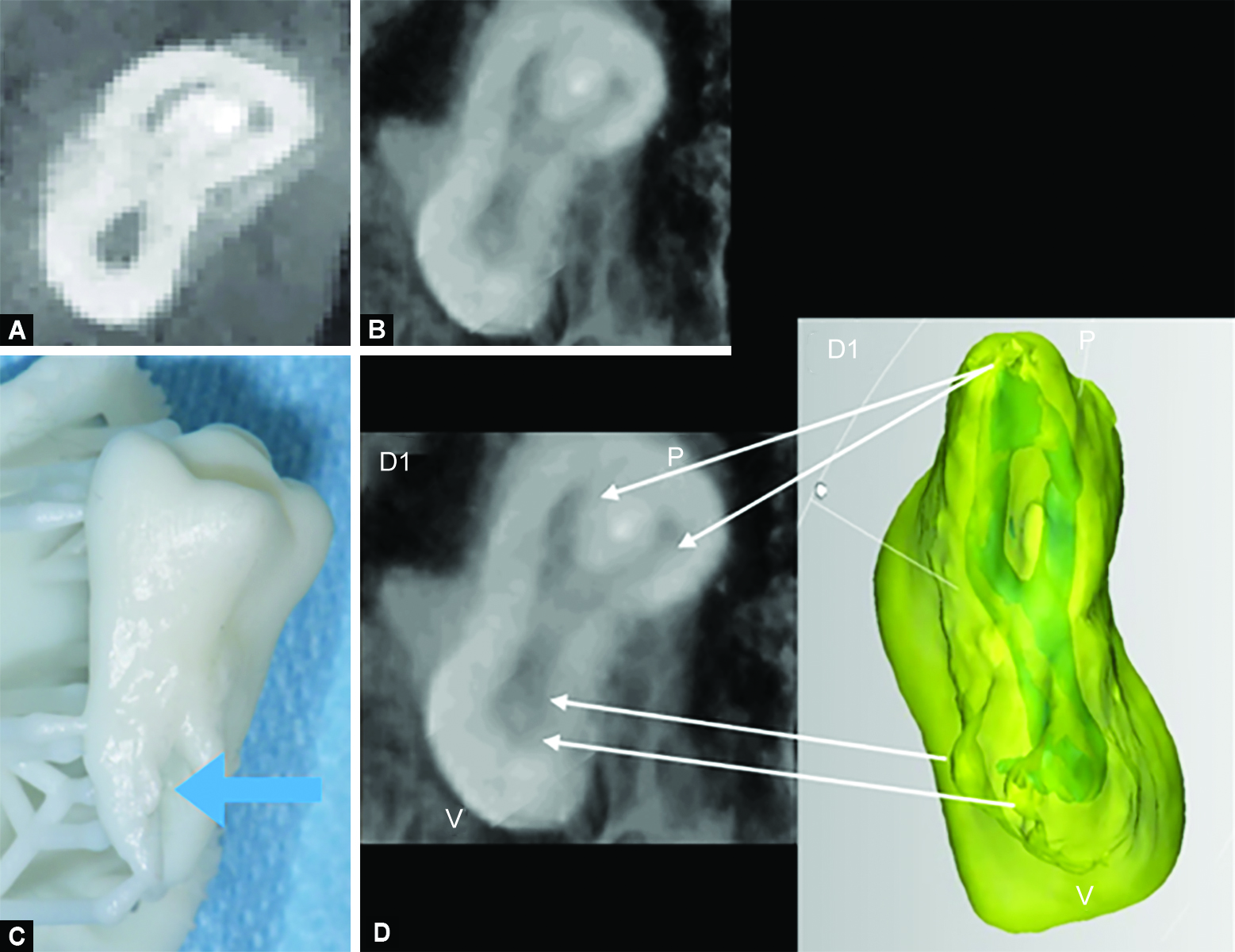 Figs 3A to D: CBCT analysis. (A) CBCT own by the patients, with low resolution; (B) CBCT after processing it with mimics medical; and (C and D) Preliminary treatment plan. The blue arrow identifies the “ledge” suspected to be the third canal

During the software manipulation, and by observing the shapes and the numbers of the roots, it was possible to detect an anatomical protrusion on the apical surface of the mesio-buccal root that could be an apical orifice of a hidden third canal. It was also possible to understand the anatomy behind the enamel-like structure in the distal portion of the tooth. Moreover, a deep furcation was located just behind the radio-opacity (Figs 3C and D).

After explaining to the patient, the treatment options and collecting the informed consent, a non-surgical endodontic treatment was planned. After the local anesthesia and rubber dam placement, the access cavity was performed under a surgical microscope (Carl Zeiss Meditec, Inc., Jena, Germany). The cavity was carefully prepared using dental diamond burs and ultrasonic tip Start-X #1 (Dentsply Sirona) guided by the information taken from the resin and digital models. The preparation began from the distal side, where the operator decided not to touch the simil-enamel structure to avoid iatrogenic perforation due to its thin thickness . The c-shape was scouted with a K-File #10, glide path was performed with ProGlider (Dentsply), and shaping was achieved with ProTaper Next NiTi rotary system X1-X2 up to WL (Dentsply Maillefer). On the mesial portion, the first two canals studied in the CBCT were easily reached, while to find the third canal, it was necessary to bend the tip of a K-File #10 in the direction of the protrusion detected during the digital volume analysis and the practice on the 3D printed model, as it resulted to be very narrow and curved (Figs 5A to C). The classic ProTaper Next shaping technique was used for the two bigger mesial canals while for the third canal, the shaping was assessed with a modified technique: ProTaper Next X1 was used up to WL and apical finishing was achieved with a NiTiflex #25 to enhance irrigation. Intermediate periapical X-rays were performed to confirm the working length and the anatomy of the canals (Figs 1D to F). Irrigation was carried out by using buffered 5% NaOCl solution (Niclor 5; OGNA) and 10% EDTA activated with sonic device EndoActivator (Dentsply Maillefer). The canals were dried with sterile paper points (Dentsply Maillefer Ballaigues, Switzerland). A carrier-based system was adopted as obturation technique (THERMAFIL, Dentsply Maillefer). The access cavity was filled and sealed permanently with a direct composite restoration using a self-etch bonding agent (“SE Bond 2”; Kuraray Noritake, Tokyo, Japan) and composite (CLEARFIL, Kuraray Noritake; shade A3). Follow-up at 1 and 6 months showed healing of the periapical radiolucency and the patient did not report any signs or symptoms (Figs 1B and C).

Figs 5A to C: Comparison of the real anatomy after opening the pulp chamber vs CBCT images. (A) Palatal canals; (B) CBCT section; and (C) Vestibular canals

The 3D model allowed the clinicians to locate and manage the unusual anatomy of the tooth. The entire treatment was performed in three appointments: the first for the access to the pulp chamber and the canal scouting, the second for the shaping and preparation of the root canal system, and the third for the sealing of canals and for the restoration. Every appointment took about 1 hour each. Between the first and the second appointments, it was possible to find a way to clinically reach the third narrow and hidden canal in the mesial portion. The preoperative planning procedure simplified the root canal treatment and decreased the risk of iatrogenic mistakes such as perforations, deviations of excessive dentin removal. CBCT imaging has proved to be a valuable tool in endodontics as it was useful to prepare the operative sequences and to study the 3D anatomy of the tooth, which are the primary steps for the treatment of complex cases.9 The knowledge of the number, the position, and the orientation of the canals, and the dimension of the roots is highly important to achieve a minimally invasive treatment. Printing a real model of the element allowed the operator to better understand the complex anatomy and prepare a correct approach. The 3D models (digital and printed) helped the clinician to plan the access of the pulp chamber and to find the hidden canal, thanks to the irregular surface of the apical portion of the mesial root. ProTaper Next was chosen as a shaping system due to their reduced contact against the canal walls, the better flexibility in narrow canals, and their capability to remain centered and their lower dentin removal compared to the original canal.18–24 The obturation system chosen in this case report was the carrier-based. This system has been chosen for its versatility for both narrow and curved canals, for the ability of thermoplastic gutta-percha to both fill every isthmus in the c-shape25 and seal both the apical and the coronal part of the canal to guarantee a better prognosis through time.26 The major issues were the research and the scouting of the third mesial canal. The use of a microscope was significant during all the steps of the treatment, especially for the coaxial illumination system for the buccal portion of the tooth. Another issue was the irrigation of the wide-open canals in the palatal portion of the tooth that was jointed with an isthmus that leads to an extension of the disinfection time assisted with sonic activation. The limit of this case report was the quality of the CBCT owned by the patient. The low resolution made the conversion of the DICOM files in CAD files more difficult to reproduce the complete root canal system. By implementing the studies about similar procedures, it may be allowed for less experienced operators to approach difficult cases.27 The 3D model allows to improve diagnosis and treatment plan allowing the clinician a complete preclinical simulation of the treatment saving time and sound tooth structure.