Conventionally, clinicians have used resistance form as a basis for determining guidelines for preparation design, which ensures the clinical success of cemented cast restorations. Resistance form is defined as the features of a tooth preparation that enhance the stability of a restoration and resist dislodgment along an axis other than the path of placement.1,2 While retention form counteracts tensile stress, resistance form counteracts shearing stress. All tooth preparations require the incorporation of the certain design features, such as parallelism, length, and surface area that are mainly associated with retention and resistance along with other factors, such as axial surface, groove, box, and pinholes to prevent the dislodgment of the restoration by functional stresses.3

The most retentive preparation is theoretically represented as the one with parallel walls (zero taper). Nevertheless, some of the earlier studies found that some degree of axial wall taper is inevitable and necessary to ensure complete seating of casting, though retention and resistance decreased. Although 6° is widely accepted as the gold standard and criterion of taper for full veneer crown preparation, studies show the actual taper of most preparations to be <12°.4-8 Tylman said that to develop frictional resistance, the near parallelism of axial walls in tooth preparations is necessary, which meant a 2 to 5° taper, an arbitrary figure advocated earlier for cast inlay preparation.9,10 J⊘rgensen's11 study on the relationship between retention and convergence angle in cemented veneer crowns related taper to retention and determined maximum retention with a 5° taper.8 A subsequent study on factors influencing the retention of cemented gold castings by Kaufman et al9 identified that the 5° taper is the point at which the most significant increase in retention occurs.12 However, Smith et al8 found that the overall mean taper for full veneer crown preparation in preclinical prosthodontics exceeded his targeted criterion of 12°; however, he stated that a 12° criterion is more realistic than a 6° criterion for full veneer crown preparations.

Retention and resistance forms are the characteristics of a preparation that prevent castings from becoming uncemented, debonded, or cement failures, which are one of the top three reasons for the replacement of castings.13,14 Tier et al's12 study on dislodged crowns and retainers revealed that there was a fundamental relation between clinical success or failure and the all-or-none nature of resistance form. They proved dislodged crowns came almost exclusively from preparations with tapers that did not provide resistance form and over 95% of all castings that failed by becoming uncemented lacked resistance form.13,15,16 Furthermore, Walton13 evaluated the modes of failure and the influence of various clinical characteristics on the outcome of the metal—ceramic fixed dental prosthesis and observed that 13% of them failed due to loss of retention.17

Scanned digital impressions of die preparations used for all ceramic restorations were collected from a dental laboratory. Images included die preparations of all ceramic single crowns (79 preparations) and bridge (35 preparations) restorations only. All the available images (n = 114) from the laboratory were included in the study sample (Graph 1). Samples were grouped into maxillary and mandibular, and again subgrouped, based on tooth type, for making intergroup as well as intragroup comparisons (Table 1).

All the available images were analyzed with the help of Adobe Photoshop CS6® photo editing software. To find out the degree of taper of each image, two straight lines extended from base of the preparation in a coronal direction along the mesial and distal margins of the preparation until they meet at a common point (Fig. 1). The resultant angle was measured for each preparation and recorded as the “degree of taper” or “degree of convergence” (Tables 2 and 3).

Distribution of samples into subgroups 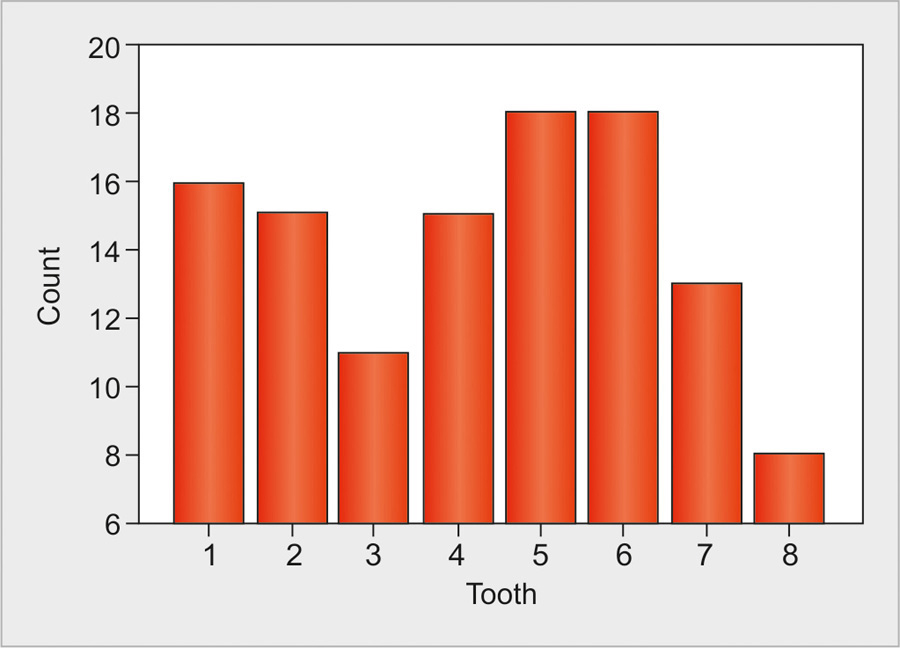 Analysis of the degree of taper and resistance using Adobe Photoshop 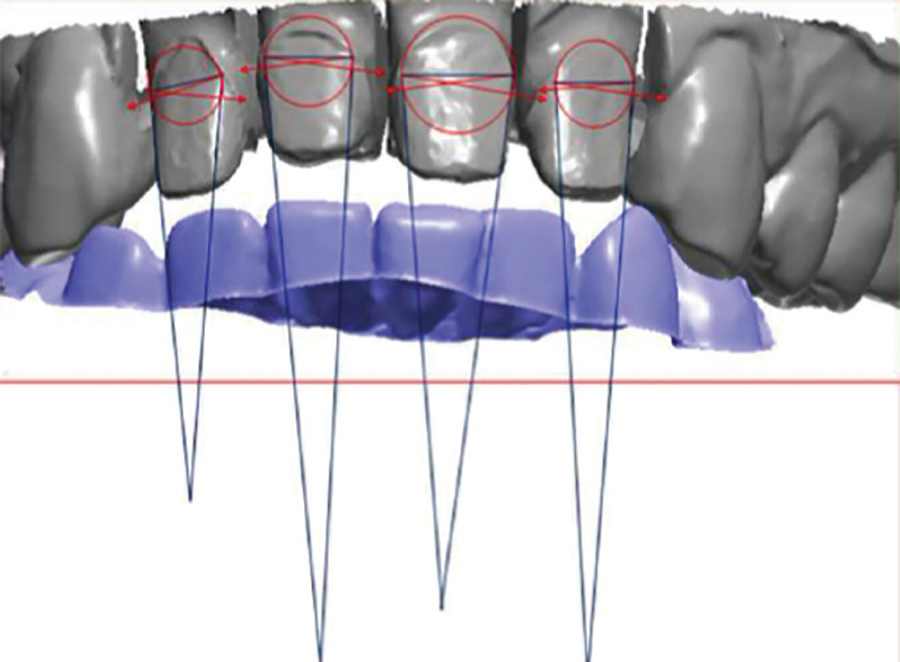 In the Lewis perpendicular method,16,18 the dividing point between the resistive and nonresistive sections of a preparation wall is taken as the point of intersection with the perpendicular line from the center of rotation on the opposing margin (Graphs 2 and 3). All points occlusal to the point of the intersection have resistance form, and all points gingival to it. Both the methods provide the same point of intersection and, thereby, the same results. Based on these measurements, preparations were recorded as preparations with or without resistance form (Tables 2 and 3).

Degree of taper comparisons of upper and lower teeth 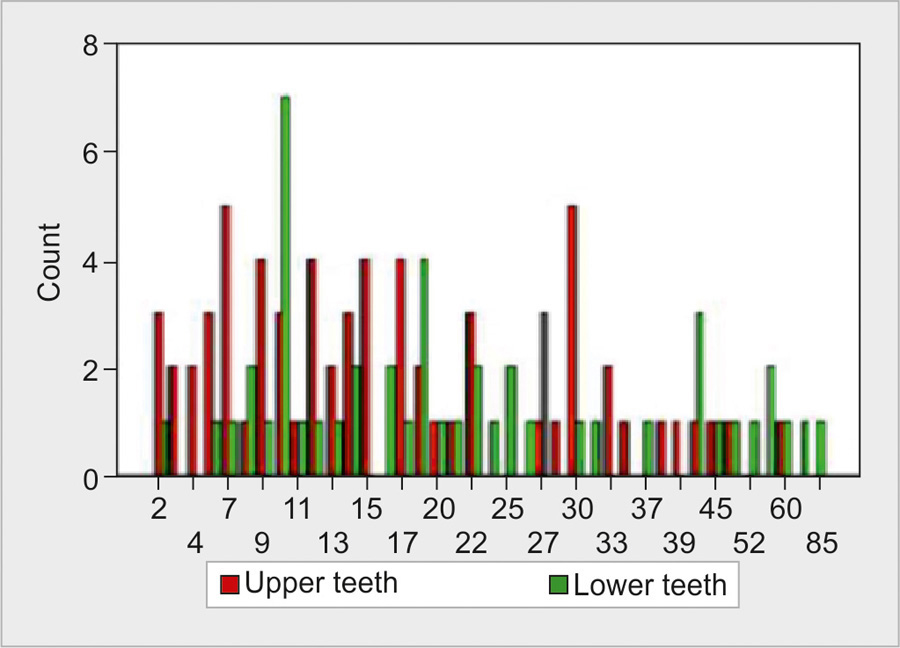 Degree of taper comparisons of anterior and posterior teeth 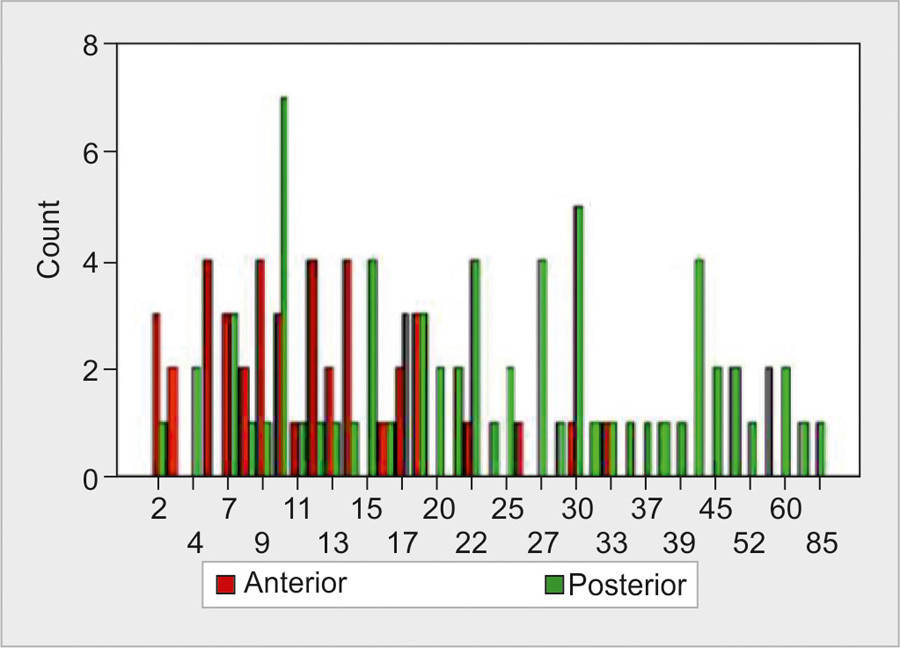 Collected data were analyzed using Statistical Package for the Social Sciences for Windows 7, and descriptive tables and cross-tabs were prepared. A variance ratio test carried out (F-test) before comparing the degree of taper between maxillary and mandibular teeth as the standard deviations for these groups were unequal.

For the present study, the overall average (mean) degree of taper is 20.9° (range, 2—80°; Graph 4). The mean degree of taper for maxillary was 17.56° (anterior—10.50°, posterior—23.7°) (Graph 3). For mandibular teeth, the mean degree of taper was 25.22° (anterior—15°, posterior—28.45°). Chi-squared test used for comparing resistance form showed highly significant differences between maxillary and mandibular teeth (p = –0.007) and also between anterior and posterior teeth (p = –0.001; Graph 2 and 3). Out of the 64 analyzed images of tooth preparations of maxillary teeth, 60 preparations (93.8%) were found to have sufficient resistance form, and 4 were found to be without it. Tooth preparations without resistance and retention form were from the posterior teeth group (Tables 2 and 3).

Distribution of degree of taper 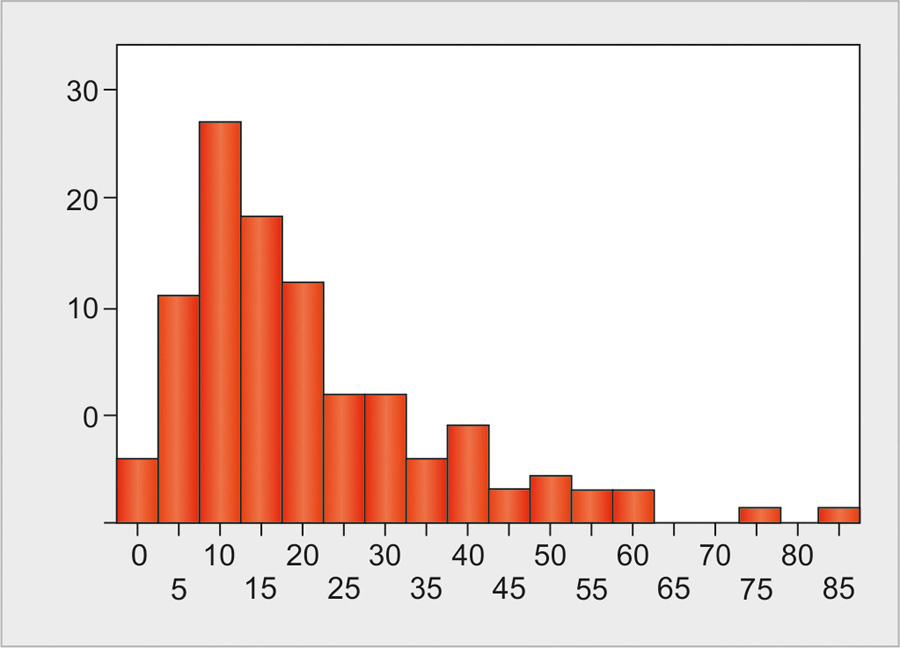 Mean degree of taper (20.9°) observed in the present study is more than what was recommended by most previous studies and also greater than the textbook ideal of 3 to 6°.8 All the anterior teeth showed resistance form irrespective of the arch, which may be attributed to reasons, such as increased accessibility and greater preparation height to base width ratio.

Trier et al12 described about the concept of limiting taper, as it has been described as a boundary between tapers that do and those that do not provide resistance form for preparation. Their study revealed a relationship between clinical success or failure and the all-or-none nature of resistance form as the dislodged crowns come almost exclusively from preparations with tapers that did not provide resistance form. Ayad et al17 confirmed through his study that tooth preparation taper and type of luting cement had a direct effect on the bond strength of complete metal crowns.19 In a computer-aided evaluation of preparations for CAD/CAM-fabricated all-ceramic crowns done by Güth et al,20 they concluded that mean convergence angle was determined to be 26.7°, which was much higher than the recommended taper and similar to the results of the present study.

In an interesting study by Tiu et al,21 they presented a coordinate geometry method of capturing and evaluating crown preparation geometry in which they used limiting taper theory based on the mathematical formula described by Parker et al.22,23 If H is the occlusion cervical dimension, B is the base of preparation, and T1 is the average taper, then the limiting taper is T (H/B) = ½/sin (H/B). If T1 is greater than this value, the preparation has no resistance form. However, none of the preparations had total occlusal convergence values close to 12°, which are the current manufacturer guidelines.22,23

Criteria related to the permissible degree of taper of preparations in current Prosthodontic Textbooks, such as Rosenstiel et al,19 and Shillingburg et al24 recommend that the taper should be within the range of 2 to 6°. However, various studies conducted by different authors, such as Olm and Silness,3 Weed and Baez,25 Noonan and Goldfogel,4 Güth et al,20 and Tiu et al21 show that in a clinical setting, the degree of taper ranges from 12 to 26.7°.6,8,9,18,26 This also justifies the mean degree of taper observed in the present study, which is 20.9°.

Even though as a foundation principle of fixed prosthodontics, 2 to 6° has been taught for years as a standard for preparation taper, unfortunately, it is not consistent with reality. Owen states, “Most teeth are prepared with tapers in excess of 12° and still function adequately.”21 It is not known what retentive figure is the minimum required clinically. An explanation for the inability of retention to provide a minimum standard is that it is a continuous function of taper. There is no exact demarcation to separate acceptable taper from unacceptable taper as it differs in different clinical situations. The most that can be deduced is that less taper gives better retention.21

The diameter for every preparation is controlled somewhat by tooth size. However, length and occlusal convergence are subject to modification.25 Before crown preparations are made, factors, such as length, diameter, and occlusal convergence angle must be evaluated. In general, these factors have been considered in relation to retention form only. It has been reported that an occlusal convergence angle of 16° or less provides adequate resistance form for a complete cast crown 3.5 mm long.25 Hence, further studies are necessitated to conclusively decide on how to develop a guideline, which is more reliable and more efficient to assess the resistance and retention form.

One limitation of the assessment methods used in the present study is that it can only be used in straight-walled preparations and also that the resistance and retention form are assessed from point-to-point rather than from any one aspect of the tooth. However, this study has been able to establish that the morphological factors of individual teeth and tooth position in the arch have an overall bearing on the retention and resistance form as evaluated by Zuckerman's and Lewis perpendicular methods. Indication for the next study is to extend the analysis to the entire preparation, to determine an average taper value that guarantees that the entire preparation is resistive and, therefore, clinically sound. For the average dimensions of each tooth, molars to incisors, values can be calculated as guidelines for preparation taper.

Within a few mentioned limitations, the study can conclude that: