The oral diseases most frequently occurring in humankind are dental caries and periodontal disease, and the causative factor of both is dental plaque. Personal and professional oral hygiene practices are the procedures directed at the removal of dental plaque. Toothbrush is one of the most commonly used adjuncts for maintaining oral hygiene.1

During orthodontic treatment, oral hygiene measures that are directed toward the removal of dental plaque around the brackets and orthodontic appliances need to become more effective. Plaque accumulation around the fixed orthodontic appliances can be challenging for effective toothbrushing and can interfere with the mechanical cleaning action of mastication. As the duration of orthodontic treatment is long, routine oral hygiene measures for the orthodontic patient including professional tooth cleaning and home care instructions must be given with a lot of consideration.2

Effective home-plaque-control measures are very conducive for maintaining a functional dentition throughout life. These include toothbrushing by manual or electric toothbrush combined with interdental cleaning. It is well known that there is a positive correlation between the degree of plaque accumulation and gingival disease. The role of plaque as a causative factor in the development of chronic inflammatory disease has been routinely confirmed in the scientific literature.3 Dental plaque causes inflammatory process in the supporting structures of the teeth, which, if progressed, results in tooth loss.4

The most effective method of achieving good oral health in most of the population is the daily usage of manual toothbrush.5 Since their first use by the Chinese in the late 16th century, toothbrushes have gone through changes in their basic structure. Various aspects, such as size, shape, bristle arrangement, texture and stiffness, head design, angulations between head, shaft and handle along with other features, as well as many other modifications have been made.

In the present day, a very wide variety of toothbrushes are available in the market. This has led to a dilemma in the consumer's mind with respect to efficacy of each toothbrush. In addition, factors such as cost, availability, advertising claims, family tradition, or personal habits decide the type of toothbrush going to be used by a particular person.6 Thus, the aim of the present study was to evaluate the effectiveness of different bristle designs of toothbrushes and the periodontal status among fixed orthodontic patients.

This RCT was conducted on 45 adolescent participants (20 males and 25 females) undergoing fixed orthodontic treatment, whose ages varied between 15 and 18 years. Ethical approval along with informed consent was obtained from the participants before the study. Detailed information about the study design and procedure was explained to the participants.

Patients with fully bonded fixed orthodontic appliances and without any systemic diseases, patients who had not taken any antibiotics or antiseptic mouthwashes for 1 month before the study were included in the study. The participants using chemical plaque control measures and those taking drugs that could affect the state of gingival tissues, including corticosteroids and nonsteroidal antiinflammatory drugs, were excluded from the study.

The formula used to calculate sample size was: 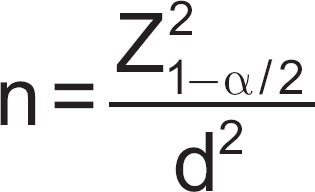 As calculated from the above formula, 45 participants were randomly allocated to three different types of locally available toothbrushes with varied toothbrush bristle designs groups (Flow Chart 1). 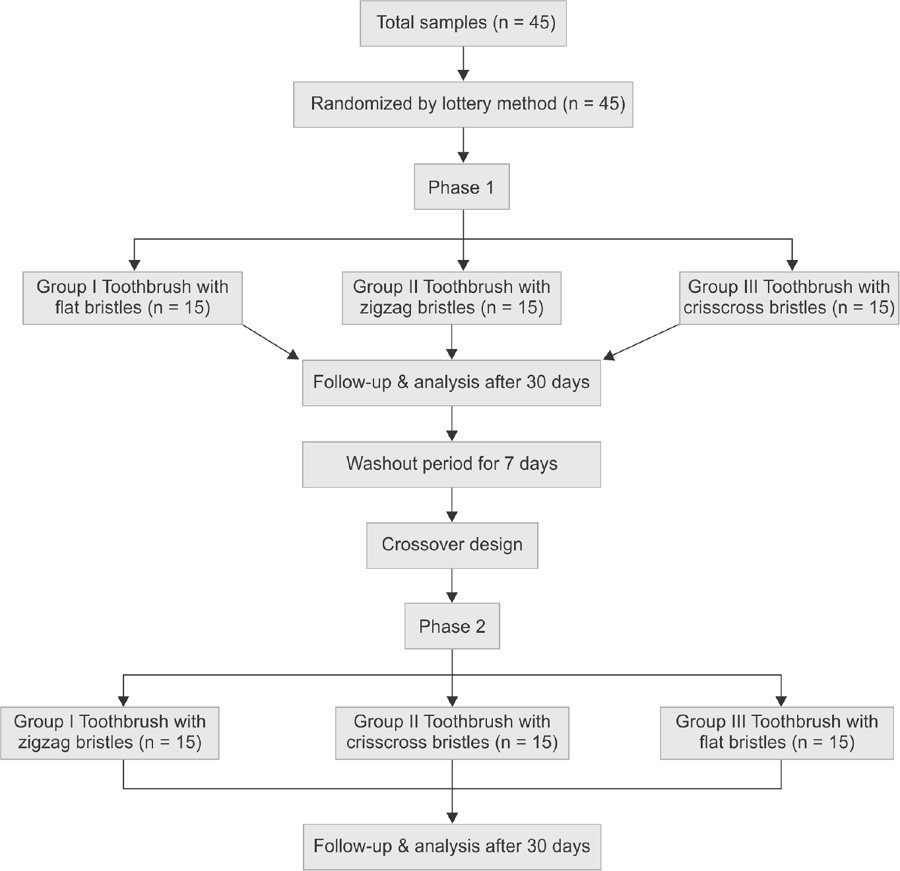 This was a double-blind crossover study, where a 1-week washout period was given between the crossover phases to evaluate the effectiveness of the three bristle designs of toothbrushes among patients undergoing fixed orthodontic treatment.

The examiner was trained and calibrated before the start of the study. Intraexaminer agreement for PI was calculated by repeat measurements that were done on 10 patients not participating in the study, within an interval of 1 hour. The Kappa coefficient for PI was found to be 0.7. All the participants were given a similar type of toothpaste. Toothbrushing technique instructions were given to the participants for the purpose of standardization. Furthermore, instructions to brush twice daily for 2 minutes (morning just after waking up and in the night before going to bed) were given to the participants, along with directions to use the same toothbrush and toothpaste given to them.

Lottery method was used to randomly allocate all the patients to the study groups according to the different bristle designs of toothbrushes. Coding was done for each one of the toothbrushes. It was only at the end of the study that the codes were decoded. In the first test phase, the toothbrushes that were allocated were in the order:

Front view of all the three toothbrushes 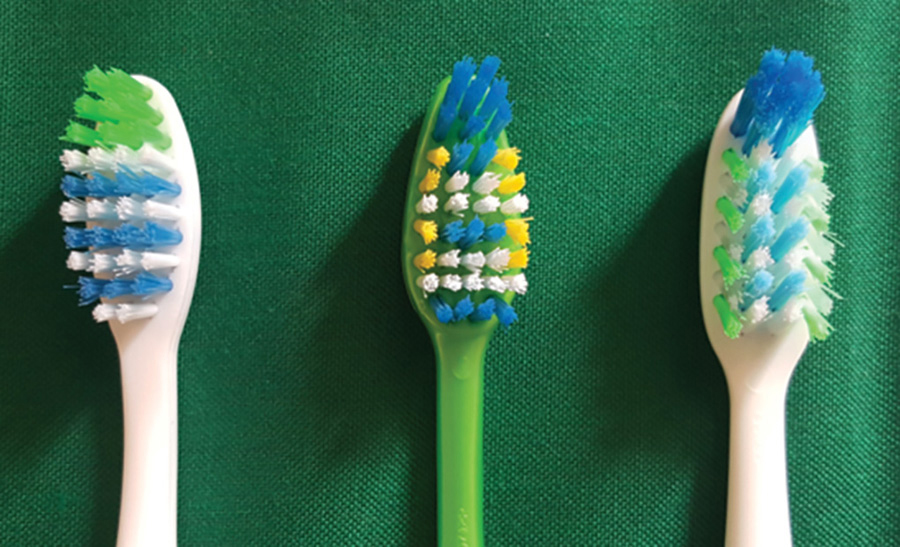 Side view of all the three toothbrushes 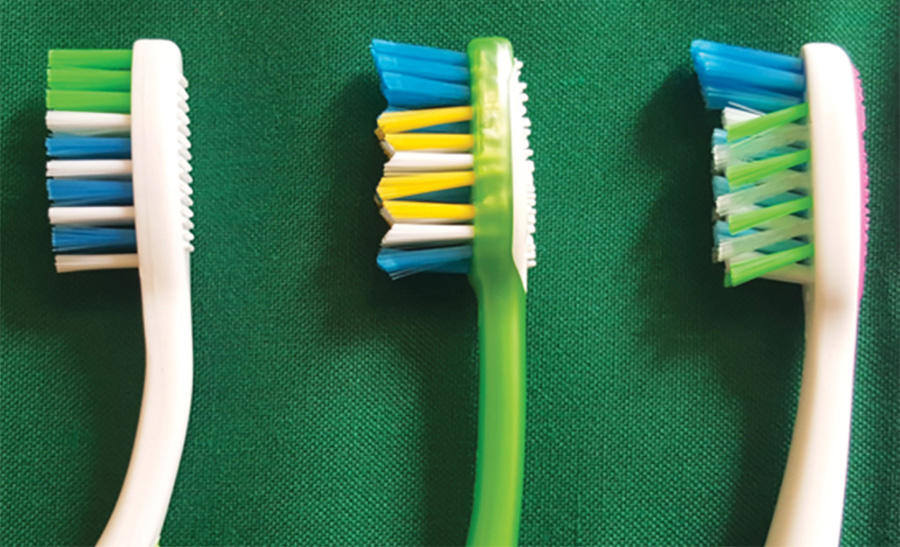 On the first day of each phase, all the patients were asked to refrain from any oral hygiene practices for 24 hours. Data regarding plaque scores were collected by assessing plaque using Turesky—Gilmore—Glickman Modification of Quigley-Hein PI.7 Two-tone disclosing solution was used to evaluate plaque on the buccal and lingual surfaces of all teeth except the third molars. The participants were recalled following 4 weeks to assess the effectiveness of the toothbrushes allocated to the three study groups.

The second test phase was carried out in a similar way, after a 1-week washout period to negate the carryover effects of the different bristle designs. Toothbrush bristle designs were alternated in the order:

Statistical analysis was done using the Statistical Package for the Social Sciences software (version 20.0). Mean and standard deviations (SDs) of the clinically examined scores were calculated. Analysis of variance and post hoc paired t-tests were applied to analyze differences between the three different bristle designs. A p = 5% significance level was maintained for all the analysis.

Table 3 depicts Scheffe post hoc analysis, which indicated that the average number of plaque removed is significantly higher in group III than in groups II and I.

In phase 2, the post hoc analysis shows that the average number of plaque removed is higher in group II than in groups I and III, as observed from Table 4.

Comparison of pre- and postbrushing PI scores in phase 1

Comparison of pre- and postbrushing PI scores in phase 2

This was a double-blind crossover trial with a washout period, conducted to evaluate the effectiveness of different toothbrush bristle designs in patients undergoing fixed orthodontic treatment. It is well known that the presence of orthodontic brackets and appliances makes the patients vulnerable to plaque accumulation around these sites. The advantages of using the crossover design are many; here the effects of the different types of toothbrushes were measured in the same person. The other advantages included lower number of participants required for the study and confounding factors within the participants (e.g., age, gender, and hand skills). However, to minimize the carryover effect, which is the main concern during the use of a crossover design, we allowed for a 7 days washout period, during which the patients went back to using their normal toothbrushes.8,9

The manual toothbrush that we use in our daily life was introduced in the 1920s; it has since then become an affordable oral hygiene device for the population at large. The most common oral hygiene habit in the last decade is toothbrushing using toothbrush and toothpaste. Numerous innovative design improvements have facilitated to increase the efficacy of a toothbrush. Most of the variations/innovations that have been observed are majorly pertaining to the design of the brush head and configuration of the filaments.4

The present study was conducted for 30 days (4 weeks) for each of the test phases. According to a study by Cohen,10 trial periods of 3 weeks are advisable if a toothbrush needs to be tested accurately. We found that the findings of this study were in accordance with Cohen10 depicting the trend toward progressive reduction in plaque scores among all the types of study brushes used during the 4 weeks of the trial. In a trial conducted by Scopp et al,11 the experimental toothbrush was found to produce lowest plaque scores in the 1st week, which was in contrast with our findings. One possible explanation could be that patients tend to revert to the same old technique they are most comfortable with.

At baseline, the plaque scores were almost similar in all the groups during each test phase. The results showed statistically significant differences between the three toothbrushes. This is in contrast to the findings of the study done by Bergenholtz et al,12 who compared a flat-trim toothbrush with V-shaped bristles and found no significant differences between the toothbrushes. In another study, Staudt et al13 compared the efficacy of three different toothbrushes, which were convex bristle, multilevel bristle, and flat-trim bristle. This study used a computer-based planimetric PI, which is considered to be superior in terms of sensitivity, objectivity, and reliability. Our study was found to be in accordance with the study conducted by Keiser and Groeneveld,14 where all the toothbrushes showed reduction in plaque scores.

In the present study, all the three toothbrushes showed significant reduction of plaque scores, to a greater or lesser degree (p < 0.05). This is in accordance with most of the studies, such as Claydon et al,15 Ashri et al,16 and Versteg et al.17 However, the difference between the pre- and postbrushing plaque scores among toothbrush with crisscross bristles was more as compared with the other two toothbrushes.

In a single-blind crossover study conducted by Stroski et al,18 the performance of various toothbrush models for controlling plaque was compared. The three toothbrushes were capable of efficiently removing plaque. The arrangement of the bristles had little effect over plaque removal. Interestingly enough, the findings of our study demonstrated that all the bristle designs were almost effective in removing dental plaque and that a slight superiority was shown by crisscross design in reducing plaque scores.

Compared with most dental procedures, a good toothbrush is relatively very economical. Appropriately choosing the best toothbrush requires choosing the right bristle designs. In general, individual preference governs the selection of bristle design. The result of our study is in contrast to that of Rustogi et al,19 where Navy index was used to quantify the plaque. The study conducted by Sharma et al20 compared five toothbrushes having flat-trimmed bristles, multilevel straight bristles with three advanced crisscross bristles, concluding that crisscross bristles were superior, which was similar to our results. Another study conducted by Kakar et al21 revealed that zigzag bristles showed increase in percentage reduction of PI scores, which are in contradiction to the present study results.

However, the efficacy and relative effectiveness of various types and designs of toothbrushes should be confirmed through long-term studies with larger sample size, with the further assessment of the plaque removal efficacy along with a long-term follow-up throughout the orthodontic treatment.

Fixed orthodontic treatment makes the patients vulnerable to plaque accumulation around the orthodontic brackets and gingival margins, complicating maintenance of good oral hygiene. Hence, it is suggested to use specially designed toothbrushes for easy and effective toothbrushing.

All the three designs of toothbrush bristles were effective in removing plaque among the patients undergoing fixed orthodontic treatment. Out of the three different toothbrushes, toothbrush with crisscross bristles showed the highest mean plaque reduction.