Periodontitis is a chronic inflammatory disease of supporting tissues of teeth caused by specific microorganisms or groups of specific microorganisms, resulting in progressive destruction of the periodontal ligament and alveolar bone mediated by proinflammatory mediators.1 Periodontal pathogens alter the host immunity-related responses against the bacterial antigens and stimulate specific cytokines.2

Type II diabetes is said to be a multifactorial disease, with lowered insulin sensitivity. The prevalence of T2DM is growing rapidly worldwide. Patients with T2DM have greater incidence and severity of periodontal diseases than those without diabetes. The National Health and Nutrition Examination Survey data also validates that poor glycemic control in diabetic patients is associated with severity of periodontitis. Various proinflammatory cytokines like TNF-α, produced from adipose tissues in obese subjects, are known to play a predominant role in inducing insulin resistance.3,4 Both periodontitis and T2DM have influence of cytokines in their pathogenesis and thus may also influence each other.5,6

Cytokines are the proinflammatory proteins, discharged by cells and specifically affect the cell-to-cell interactions. They are produced by activated macrophages and are associated with the upregulation of inflammatory reactions. The TNF-α (cachexin or cachectin) is an important proinflammatory mediator that causes destruction of periodontal tissues. It is the most extensively studied cytokine and is active in two forms: TNF-α and TNF-β. The former is produced by the activated macrophages, neutrophils, keratinocytes, monocytes, and mast cells in response to lipopolysaccharides. It has a role in pathogenesis of both periodontitis and T2DM.7

Interleukin 6 may show both destructive or protective functions in chronic disease.8,9 Interleukin 4, another cytokine, is said to decrease the production of both TNF-α and IL-6, and thus may be anti-inflammatory.10

In recent times, more attention has been given to understanding the influences of these inflammatory cytokines, which are considered a main part of oral chronic inflammation on systemic health of the individuals. Successful periodontal treatment appears to have beneficial effects on the metabolic control of T2DM.

The study population in this study comprised a total sample size of 60 patients which were selected from the outpatient department of the institution. A detailed history along with preinformed consent was taken from the patients before including them as subjects in this study. Ethical clearance for this research study was also obtained from the Institutional Ethical Committee. These patients were subdivided into four study groups with 15 subjects (n = 15) in each group:

The participants of the study aged between 30 and 60 years. Complete periodontal examinations which included plaque index (PI), gingival index (GI), bleeding on probing (BoP), pockets, and clinical attachment loss (CAL) were done for each person using a Williams periodontal probe. Group I subjects had a healthy periodontium with no gingival inflammation (GI = 0; pocket depth ≤3 mm, and CAL = 0). Patients categorized under group II (generalized chronic periodontitis) were those subjects who presented with pocket probing depth (PPD) of ≥5 mm and generalized CAL of ≥2 mm supported by bone loss on radiographs as well. Groups III and IV included subjects who were diagnosed with T2DM from at least past 6 months. Exclusion criteria included smokers, pregnant and lactating women, individuals who underwent periodontal treatment within past 3 months, human immunodeficiency virus infected, or subjects on chemotherapy. After the salivary sample collection, PI, GI, periodontal pocket depth, and loss of attachment were measured by using Williams periodontal probe.

All the obtained data were recorded and tabulated and then evaluated statistically. Means and standard deviations (SDs) for each group were calculated; p ≤ 0.05 was considered as statistically significant. Relationships between the study groups were calculated by nonparametric tests, such as Mann—Whitney U-test and Wilcoxon signed-rank tests. In detection of correlations between different groups, Spearman's rank correlation test was used.

Mean clinical periodontal measurements among all the four groups

Mean clinical periodontal measurements among all the four groups 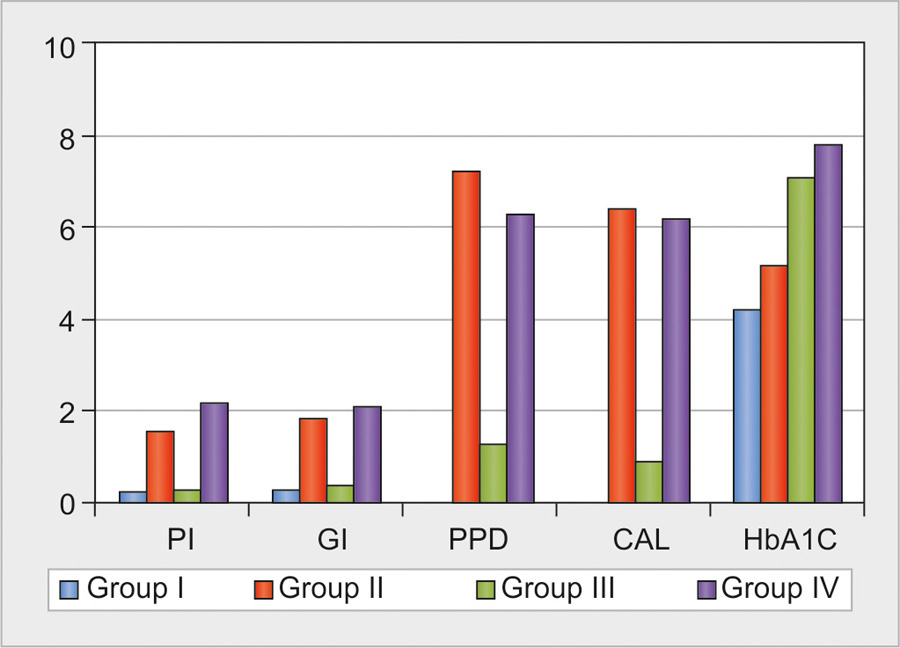 Means of the serum cytokines TNF-α, IL-6, and IL-4 in all the groups 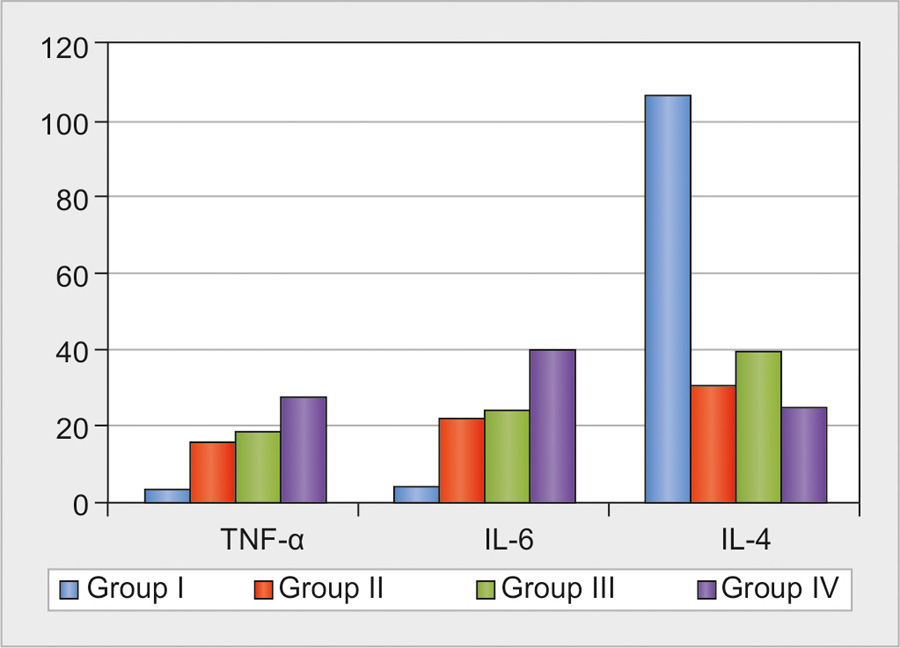 Means of the serum cytokines TNF-α, IL-6, and IL-4 in all the groups

When intergroup relationships were compared, it was observed that the difference between almost all the results showed statistical significance. Not much of a difference was seen when TNF-α and IL-6 findings of group II were compared with group III. Furthermore, IL-4 also did not differ when group II was compared with group IV. When all the groups collectively were compared, all the cytokines showed a significant correlation with the periodontal clinical parameters observed. No statistically significant correlation was seen except for TNF-α with CAL in group IV and TNF-α with IL-4 in group III.

It is known that T2DM is one of the major risk factors in patients for developing periodontitis and this risk is much higher as compared with the healthy subjects. Poorly controlled glycemic status in T2DM subjects not only affects the periodontal status but also is associated with altered immune response, thereby accentuating the inflammatory condition. Thus, a two-way relationship is shared between periodontitis and T2DM.11

Although in many earlier studies saliva has been used, being easily available and a noninvasive specimen to detect the various cytokines associated with periodontal diseases, in our study, we used plasma sample because markers, such as TNF-α and IL-6 are reported to be present in less amount in saliva.12-14

Further, in the study when clinical parameters, such as GI, PPD, and CAL were compared with the glycemic variable, a significant difference (p < 0.005) was found among these variables between groups II and III and also between groups II and IV. Out of all the studied groups, group IV subjects presented with the highest values for all the periodontal clinical variables and hereby showed a direct positive correlation between the clinical and glycemic parameters. Thus, glycemic control as per our study was found to be related to the severity of periodontitis, which is in accordance with previous studies published.15

Among the studied cytokines, TNF-α and IL-6 presented with elevated levels, while IL-4 did not show such results in the diseased groups. Among all the diseased groups, group IV showed the highest values for both TNF-α and IL-6 and the difference was also clinically significant (p < 0.005). These results were in accordance with previous studies out of which one was of Taylor et al.16 When intergroup relationships were compared, it was observed that the difference between almost all the results showed statistical significance. Not much of a difference was seen when TNF-α and IL-6 findings of group II were compared with group III. Furthermore, apart from CAL and TNF-α in group IV, no other clinical variable showed a positive correlation, which is also in accordance with a study done by Saxlin et al,17 whereas, on the contrary, lower levels of IL-4 were seen in group IV, and no significant difference was observed between groups II and III, which is in accordance with the results reported by Ribeiro et al.18

Thus, our results present elevated TNF-α and IL-6 in diabetic patients, whereas IL-4 did not show much of an important role in these patients. This is justified by a study done by Taylor et al16 who also quoted that periodontitis is caused by bacterial infection, which initiates the inflammatory process and caused the tissue destruction and attachment loss. In diabetes mellitus, this inflammatory response is modified by elevating the cytokines, especially the IL-6, IL-1β, and TNF-α, which further progresses the disease and leads to bone destruction by affecting the bone metabolism.

With few limitations, such as less sample size and more detailed history and categorization of the diabetic patients, this study highlights the role of TNF-α and IL-6 in maintenance of periodontal health in diabetic patients.

The inflammatory cytokines together control the inflammation process and a balance is maintained. However, in patients with diabetes mellitus, this balance is interrupted which affects the final development and progression of the disease. Thus, hyperglycemia may be partly associated with the severity of the periodontal status in diabetic patients. Further studies with more sample size should be done to validate this correlation.

Hyperglycemia plays a significant role in increasing the severity of the periodontal status in diabetic patients. Such interrelationships should be kept in mind while providing treatment to the patients.