One of the debilitating states of the oral environment is edentulism. It is often considered as the ultimate marker for predicting the pressure and burden on oral health. Especially among geriatric patients, it remains a common problem affecting a significant population across the world.1,2 Various vital functions and processes are running continuously through the human body, and one of it is respiration. It involves the exchange of carbon dioxide and oxygen with the purpose of meeting the metabolic demands of the human body.3,4

Spirometry is widely used for the assessment of the functioning of the respiratory system and its mechanical properties, by evaluating the lung volumes and capacities. Even in chronic pulmonary disorders, spirometry is routinely used. Spirometry offers numerous advantages in comparison with the other lung functional tests including its ability to evaluate through the noninvasive route.5-7 In the light of above-mentioned data, we planned the present study to assess the impact of complete dentures on the functioning of the respiratory system.

The present study was conducted in the Department of Prosthodontics of the dental institute and included spirometric assessment of the effect of complete dentures on respiratory performance. Ethical approval was obtained from the Institutional Ethical Committee, and written consent was obtained from all the subjects after explaining in detail the entire research protocol.

A total of 100 subjects were included in the present study. Inclusion Criteria

Two hours before the start of the spirometric test, the patients were instructed not to perform any type of concentrated physical activity, including walking, running, or even climbing of the staircase. Patients were instructed to wear loose-fitting clothes so that unrestrained natural movement of the chest and abdomen could occur during the physiologic respiratory mechanism. Before the starting of the test, the height and the weight of all the subjects were noted. Experienced technicians were hired for performing the spirometry procedure. The diagnostic spirometer (Technocare Medisystems, India) was used for carrying out the spirometric test at different stages of each subject. Spirometric test was carried out at following stages:

Measurement of the following spirometric parameters was done in all the patients:

All the results were compiled and noted on the Excel sheet. Comparison in between the values obtained at different stages was done using SPSS software. Chi-square test, Fisher t-test, and one-way analysis of variance were used for assessment of the level of significance; p < 0.05 was considered as statistically significant.

Demographic details of all the subjects 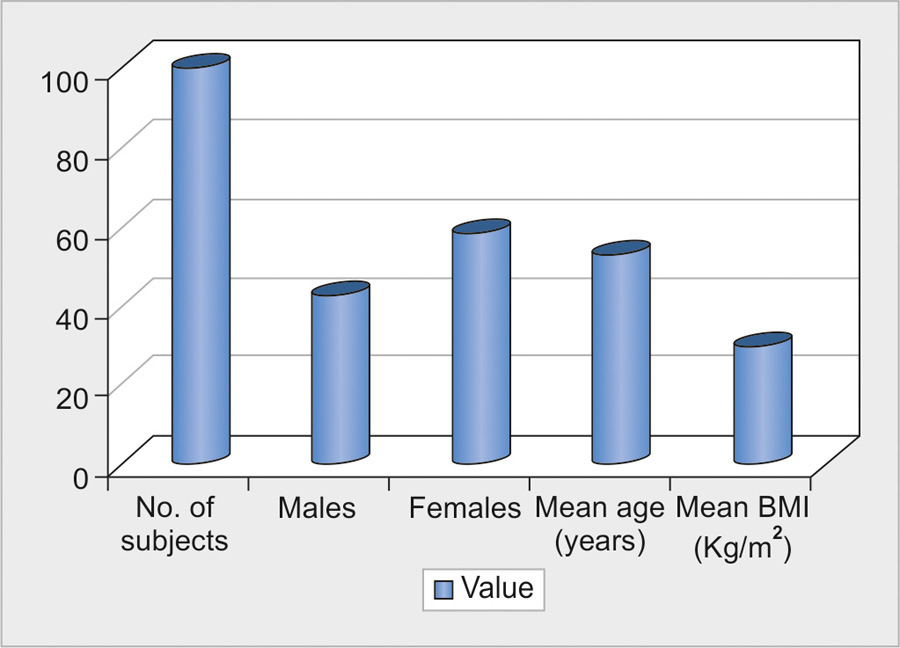 Comparative evaluation of spirometric values with and without dentures

Ever since the evolution of modern dentistry, dentists have had a keen interest in the effect of skeletal soft tissue changes on the facial soft-tissue profile of an individual. Correlation between various cephalometric variables and morphology of face along with the relationship of cervical and orofacial areas have been a topic of current research for the past few decades.8-10 Hence, we planned the present study to assess the impact of complete dentures on the functioning of the respiratory system.

In the present study, we analyzed a total of 100 subjects and evaluated the effect of various oral conditions [with and without dentures (WODs)] on the respiratory performance (Graph 1). Spirometric values were highest in the edentulous condition in the absence of denture (Table 1). Furthermore, we observed significant effect of denture wearing on spirometric values in edentulous patients (p < 0.05; Table 2). As demonstrated by various past studies, a strict relationship exists between orofacial conditions and the upper airway.11,12 Oral cavity is narrowed by wearing of large prosthesis like complete dentures. Further, posterior positioning of the tongue occurs by wearing of complete denture due to its high thickness, which further results in collapsing of pharyngeal airspace.8 It was intended by Carossa et al13 to evaluate whether edentulism may affect spirometric measurements. In a total of 58 edentulous subjects, they recorded spirometric values in with denture and WOD conditions. They also assessed 36 asymptomatic normal subjects (N) and 22 patients with COPD. They used the cephalometry technique for assessment of the retropharyngeal space with denture and WOD in 10 subjects. Removing denture in the N group created a noteworthy decline in lung volumes and airflow rates, whereas it was unsuccessful in COPD patients. Furthermore, it showed retropharyngeal space, which was meaningfully reduced by removing dentures in both the groups. It was also observed that by decreasing extrathoracic airway caliber, edentulism influences significantly the spirometric measurements in normal subjects, but not in those with COPD.

In another study, immediate daily and weekly variations in respiratory resistance (Rrs) measured by means of the forced oscillation technique (FOT) to spirometric indices were compared in pediatric patients with chronic respiratory symptoms. They made investigations in relation to lung functioning measurements on 19 children in 4 days, i.e., two consecutive days during two consecutive weeks. During the entire study period, the measurements were conducted at the same time of the day and every time repeating three times. Further, in 12 children, they observed that intrasubject factors of deviation (coefficient of variation, CoVs) for Rrs and FOT were more than those for spirometric indices. However, in the instantly repetitive measurements, the CoV was of maximal expiratory flow at 25% vital capacity larger than that of Rrs, FOT.14 Bucca et al15 noted the alterations in values of FVC, FEV1, PEF rate, FEF (50%), FIV1, and FIF (50%) recorded with denture and WOD in three gatherings of edentulous subjects: 36 asymptomatic subjects with typical spirometry (N), 22 patients with unending obstructive aspiratory illness (COPD), and 18 with interstitial lung disease (ILD). They used cephalometry for evaluation of retropharyngeal space in patients with denture and WOD. Subjects with N and ILD had fundamentally had air movement rates brought down WOD, while subjects with COPD had no noteworthy contrast in spirometric values recorded with denture or WOD. The retropharyngeal space was fundamentally diminished by eradicating dentures. These conclusions demonstrate that in edentulous subjects with a usual or preventive configuration, the account of stream volume arcs with denture or WOD delivers little, yet noteworthy alterations. Although such contrasts do not seem to have clinical essentialness, the point that when dentures are utilized, some respiratory streams are higher would support the utilization of dentures in edentulous subjects throughout spirometric assessment.

In 46 edentulous subjects, in another study, spirometric performance was analyzed. Respiratory utilities of the subjects were assessed by spirometric tests that were performed in four diverse oral conditions: WOD, with dentures, bring down denture just, and upper denture as it were. The FVC, top expiratory stream, constrained expiratory volume in 1 second, and constrained expiratory stream in the vicinity of 25 and 75% were assessed. Important variations were found between spirometric parameters in various oral conditions. In all spirometric parameters, the most imperative noteworthy variation was found between conditions WOD, FVC, and with lower dentures FVC and WOD and with upper dentures. It was noticed that entire dentures may adversely influence spirometric estimations of edentulous subjects. Nonetheless, existing conclusions should be affirmed with progressive respiratory utility.16

The FCV, PEF, FEV1, and FEF25—75 spirometric parameters are affected by wearing of complete dentures in edentulous patients. Since there are numerous respiratory functional tests available these days with added advantages, testing of these results with more advanced tests is required for the establishment of above-obtained data.

Dentures may adversely influence spirometric estimations of edentulous subjects. Protocols for respiratory exercise should be carried in denture-wearing edentulous patients for increasing the performance of the respiratory system.