Tooth bleaching has become very popular over the past few decades, and it is currently one of the esthetic dental treatments most commonly delivered. As it is a simple, conservative, effective procedure for the removal of intrinsic stains present on teeth, bleaching is widely performed by both general and specialist dental practitioners.1,2 At present, tooth bleaching techniques are basically limited to the application of two types of bleaching gels: Carbamide peroxide and hydrogen peroxide. In vital teeth, both peroxides may be used either in the office, applied by the dentist (in-office bleaching), or at the patient’s home (at-home bleaching)—the latter also requires supervision by a dentist.3

When the bleaching agent is applied on the tooth surface, it penetrates the enamel layer, through interprismatic spaces, and also the dentin, through dentinal tubules.4-6 Carbamide or hydrogen peroxide act through a complex oxidation reaction, according to Fick’s second diffusion law,7 releasing oxygen with extremely low molecular weight. This oxygen reacts and chemically degrades chromogens, making them soluble and expelling them by diffusion.2,8 As a result, the tooth becomes free from pigments and consequently lighter in color.9-11

If, on the one hand, bleaching gels are in contact with tooth structures, on the contrary, they also act on restorative materials and their adhesive interface. Several studies have been performed to investigate the possible deleterious effects of peroxides on restorative materials,12-14 especially on the bonding of the composite resin to the tooth structure, which could affect marginal sealing.15-22 Some of those studies have demonstrated that bleaching gels negatively affect bond strength in restored teeth.23,24 Poor sealing and decreased bond strength lead to marginal microleakage, causing the penetration of bacteria, liquids, molecules, and ions into the tooth/restoration interface.25 Therefore, some authors advocate the use of total-etch adhesive systems in teeth that will be restored and later subjected to bleaching.17,20,21

The aim of this study was to assess, using confocal laser scanning microscopy, marginal microleakage in bovine teeth with cervical cavities restored with composite resins, and two different adhesive techniques and subjected to at-home and in-office bleaching.

Cavities were restored using the incremental technique with Filtek Z250 shade A2 (3M ESPE, Saint Paul, Minnesota, USA), at a total of 3 equal increments, each one light-cured for 20 seconds (Coltolux II, Coltene, St. Gallen, Switzerland). All restorations were finished and polished using polishing disks (Soflex; 3M ESPE). Then, all restored teeth were subjected to thermocycling (MpBased, KARA 1000, Tehran, Iran) for 500 cycles between 5 ± 2 and 55 ± 2°C, with hold times of 30 seconds at each temperature and 10 seconds at each temperature change. Six groups with 10 teeth each were formed, as shown in Table 2.

After this stage, the apical foramina of the teeth were sealed with wax and gutta-percha, and the tooth surfaces, including the foramina, were covered with two layers of nail polish, except for the restoration areas, as of 1 mm from the margins. Specimens were then immersed in 0.1 M rhodamine B solution (Aldrich Chem. Co., Milwaukee, Wisconsin, USA) for 48 hours, not alternating with water. Then, teeth were stored in water and longitudinally sectioned in buccal-lingual direction using a diamond disk sander (Denta rapid, Krupp Dental 759 DR 2, Hilzingen, Germany), grounded with 500, 1000, 1500, and 2000 grit sandpaper (3M ESPE), and washed in an ultrasonic cleaner (L100, Schuster, Santa Maria, Rio Grande do Sul, Brazil).

Specimens were analyzed under confocal laser scanning microscopy (Fluoview™ 1000; OLYMPUS Corporation, Japan), using argon laser at an excitation wavelength of 635 nm. The areas were scanned between 10 and 50 μm below the treated surface to reduce the influence of the smear layer created during the sectioning and polishing process. The area of fluorescence was quantified using an image analysis system (Fluoview viewer; University of Minnesota, Minnesota, USA).

All groups presented marginal microleakage. The scores obtained in each group are shown in Table 3 and Graph 1. There were no significant differences in the microleakage scores obtained between the two control groups or between the four groups subjected to bleaching (regardless of the type of bleaching agent or adhesive system employed). Conversely, differences were found when the control groups were compared with the experimental groups, with the former showing lower microleakage scores than the latter.

Marginal microleakage tests are widely used to assess the quality of adhesion in composite resin restorations,27,28 and they are extremely important to identify negative consequences of polymerization contraction in composite resins and to evaluate marginal sealing. When aging is present, marginal microleakage tests also allow to evaluate the long-term quality of the bond, provided the applicable cavity standardization and preparation norms are followed.29 For the scope of this study, bovine teeth were used because they have an enamel and dentin structure very similar to that of human teeth, in addition to being easily obtainable and handled.27-29 In the present study, all experimental stages, from tooth selection, through cavity preparation, restorative technique, and bleaching technique up to specimen preparation, were performed by a single trained, experienced operator. This one-operator approach allowed to eliminate any bias that could influence final results, as the outcomes of restorative techniques are known to be extremely dependent on operator ability and experience.

Microleakagea scores (median and interquartile range) obtained in each group 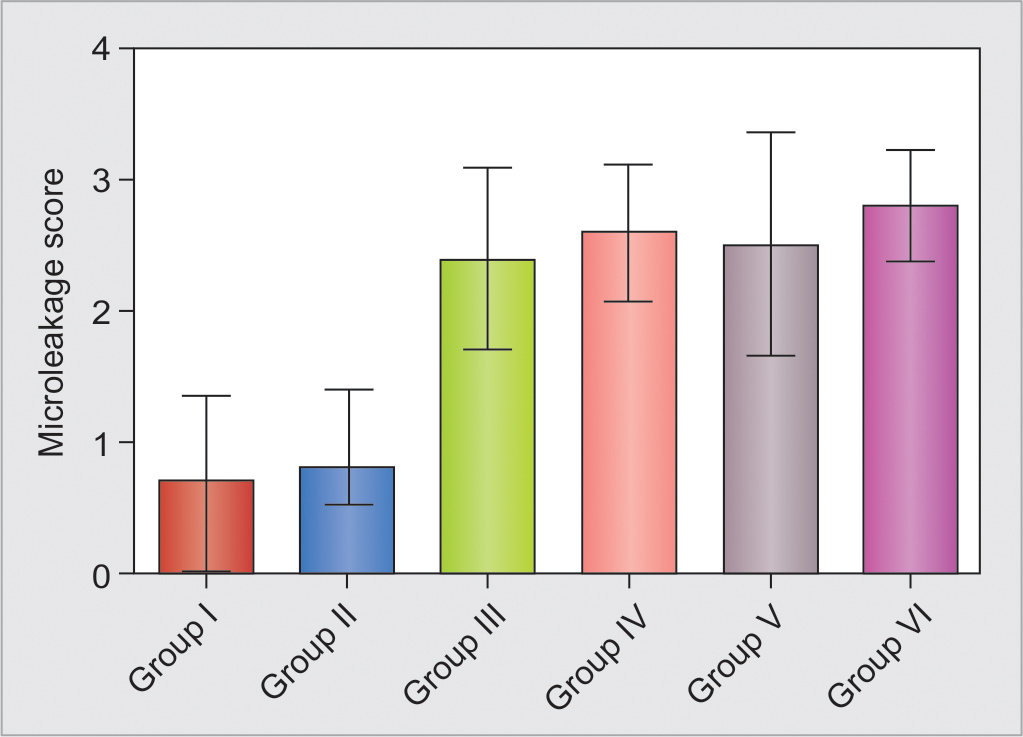 Microleakage scores obtained in each group and median score

All groups subjected to bleaching scored 3 for microleakage, meaning that the dye penetrated into the axial wall. One possible explanation for this finding is that, as bleaching products penetrated into the axial wall, they opened a gap for pigments to penetrate as well. Therefore, the oxygen released in the peroxide oxidation reaction may not only chemically degrade the chromogens2 but also slightly degrade the dentin/adhesive interface, causing spaces to increase in the interface. We believe that the occurrence of nanoleakage into the adhesive interface causes the released oxygen to penetrate and slowly expand, gradually increasing in size, from a nanofailure to a microfailure, thus resulting in microleakage. In this scenario, a clinical speculation could be that the diffusion of H2O2 to the axial wall may be one of the factors responsible for postoperative sensitivity or pain caused by the toxic effects of this chemical on pulp cells.14 This fact may be correlated with the literature, which shows that 70% of the patients subjected to bleaching complain of postoperative sensitivity.30

When the effects of bleaching agents were compared with regard to the adhesive system employed (self-etch vs total-etch), no significant differences were found, i.e., marginal microleakage with penetration into the axial walls was observed in all groups subjected to bleaching. This finding suggests that bleaching agents and their byproducts are able to penetrate and perhaps modify the hybrid layer of the restoration area, affecting the quality of adhesion. The literature on this topic is scarce, and some authors17 advocate the use of the traditional adhesive system, i.e., total-etch, due to the increased resin–enamel bond strength of this system, consequently improving marginal sealing against bleaching agents. For instance, Mortazavi et al31 concluded that bleaching agents affected marginal sealing in composite resin restorations made with self-etch adhesive systems. Those authors emphasized on the importance of using total-etch adhesion in restorations that will later be subjected to bleaching with carbamide peroxide products. However, this was not confirmed in our study: Rather, all groups showed marginal microleakage after exposure to bleaching agents.

Penetration of hydrogen peroxide bleaching gels toward and into the pulp is also dependent on enamel and dentin thickness,6 as thin layers (e.g., in mandibular incisors vs premolars) make it easier for bleaching gels to reach the pulp. In the present study, all the teeth subjected to bleaching gels, even those with thick enamel and dentin layers, showed dye penetration into the axial wall, suggesting that bleaching gels are aggressive to the dentin/adhesive interface. Therefore, it is extremely important to conduct a detailed assessment of the clinical status of previous restorations so as to prevent future sensitivity.

Crim,15 in turn, using human teeth with cervical cavities restored with composite resin and total-etch adhesives, found that carbamide peroxide bleaching gels applied 2 hours daily for 9 days negatively affected marginal sealing, inducing microleakage. In the present study, carbamide peroxide gel was applied 3 hours daily. The literature presents conflicting findings about the effects of bleaching agents on the marginal seal of composite resin restorations, regardless of the type of adhesive employed (total-etch vs self-etch) and composite resin composition (silorane based vs methacrylate based).32 We believe that application time and bleaching agent concentration are the determinants of marginal microleakage. More studies are warranted to assess different application times.

Finally, when comparing the use of at-home vs in-office bleaching agents, no differences were found, i.e., marginal sealing was affected regardless of the type of gel employed. Again, we believe that the release of oxygen is the factor responsible for inducing marginal microleakage, regardless of the type of bleaching system employed. Therefore, microleakage seems more likely related with application time and product concentration.

In sum, the present findings underscore the important role of dental practitioners in warning patients with restored teeth about the possible sensitivity issues that may result from the use of bleaching agents, regardless of the technique used during restoration. In this sense, tooth bleaching seems to be dependent on several important factors, related to both the patient and the dental practitioner, rather than exclusively dependent on the type of adhesive system employed in the restoration, or the type of bleaching gel used previously.

Marginal microleakage in composite resin restorations is influenced by the action of bleaching gels applied both at home and in the office, regardless of the adhesive system employed (total-etch or self-etch).

Both at-home and in-office bleaching agents have an influence on the adhesive interface of resin restorations, producing changes and inducing marginal leakage.