Smoking is one of the common practices observed in many parts of the world. Tobacco, the most common constituent of smoking, is burned and inhaled.1 Smoking is classified by the World Health Organization as a chronic and progressive pathology which is “contagious”; also every body part is prone to damage by smoking.2 Cigarettes are the most common form of smoking employed by a majority of smokers. The other commonly used forms of smoking include pipe smoking, cigar smoking, bidis, and bongs.3 Tobacco is the most widespread substance present in smoking. Tobacco is the plant belonging to genus Nicotiana of the Solanaceae family.4 Literature supports the fact that relaxation and calmness feelings are provided by smoking. It is also hypothesized to reduce the appetite and increase the metabolism of the body. As a result, there is also sometimes weight loss seen in smokers. α-Amylase is heterogeneous enzyme which requires calcium and chloride ions for its action. It plays an important role in the physiologic digestion of starches.5,6

Protection against free radicals is provided by antioxidants in the body. Antioxidants in the saliva are chiefly composed of uric acid, CAT, peroxidase, and some other important enzymes. Antioxidant system of the body is attached by the cigarette smoking.7-9 Literature quotes paucity in data, highlighting the changes occurring in antioxidative levels in smokers. Hence, we planned the present study to evaluate the impact of cigarette smoke on salivary antioxidant levels and cotinine levels in smokers and nonsmokers.

The present study was conducted in the Department of Oral Pathology and Oral Medicine of the dental institution and included assessment of salivary parameters of smokers and nonsmokers. Ethical approval was taken from the Institutional Ethical Committee, and written consent was obtained after explaining in detail the entire research protocol. A total of 400 subjects were analyzed, of which 200 were active smokers and 200 were nonsmokers. All the patients belonged to the age group of 25 to 50 years with approximately similar mean age. For avoiding discrepancy in the results, only male smokers were included in the present study. Smokers were categorized as subjects having five or more cigarettes per day for a minimum of 5 years.10 Subjects that had never smoked even a single cigarette were categorized as nonsmokers. Exclusion criteria for the present study included as follows:

Drool (resting) technique was used for the collection of unstimulated whole saliva. Any kind of oral stimulation was prohibited in all the subjects 2 hours before the collection of saliva. In patients belonging to the smoker group, they were given institution of smoking 1 hour before the starting of the experiment. In the floor of the oral cavity, salivary pooling was allowed, of which a collection of 5 mL of saliva (unstimulated) was done in a sterile tube. For the elimination of the effect of dietary supplements, a collection of salivary sample was done after 1 hour of fasting. Centrifugation of the salivary sample was done immediately at 4°C for removing of squamous cells and other remaining cellular debris. Isolation of the resultant supernatant solution was done. Until collection of all the samples was done, all the samples were stored at –80°C.

For the determination of cotinine levels, Bioassay Technology Laboratory kit was used using ELISA technique. After assessment of levels of all the salivary parameters, all the data were recorded and compiled. All the results were analyzed by Statistical Package for the Social Sciences software. Chi-square test and one-way analysis of variance was used for the assessment of the level of significance; p < 0.05 was considered as statistically significant.

Correlation of salivary parameters between smokers and nonsmokers

Descriptive values for salivary parameters in smokers and nonsmokers 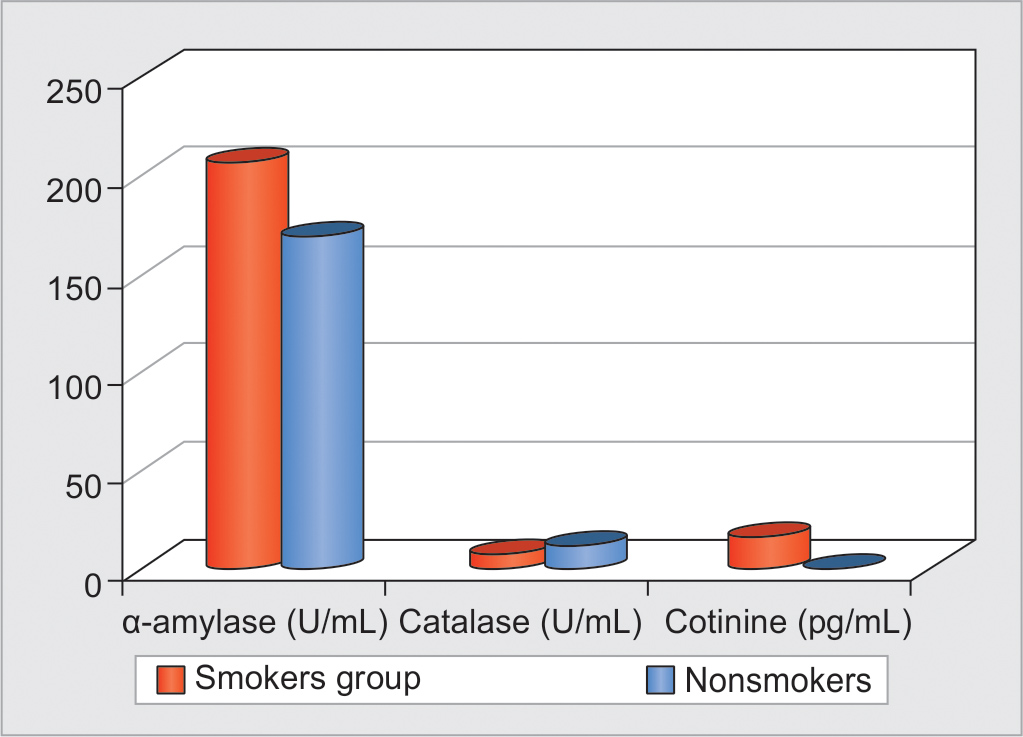 By 2020, it has been hypothesized that smoking alone would cause deaths up to 10 million per year throughout the world.12 Due to a higher prevalence of smoking habit among developing countries individuals, higher number of deaths is expected due to smoking habit in developing countries in comparison to developed countries. In fighting against smoking habit and pathologies caused by smoking, a huge amount of money and resources are used by countries.13 In comparison to other body fluids, saliva is coming up as a significant alternate for diagnostic purpose.14 Hence, we planned the present study to evaluate the impact of cigarette smoke on salivary antioxidant levels and cotinine levels in smokers and nonsmokers.

In the present study, we did not observe any significant difference in the levels of salivary α-amylase and CAT between smokers and nonsmokers group (p < 0.05) (Table 1). In relation to salivary cotinine levels between smokers and nonsmokers group, we observed statistically significant difference (p > 0.05) (Table 1 and Graph 1). These results highlighted the effect of smoking on the salivary antioxidants and salivary cotinine levels. Our results were in correlation with the results obtained by Nosratzehi et al15 and Ahmadi-Motamayel et al,16 who also reported similar findings in their respective studies. Ahmadi-Motamayel et al16 evaluated the impact of cigarette smoking on salivary levels of CAT, vitamin C, and α-amylase. This research was done in Hamadan on 510 patients, of which 259 were smokers and 251 were nonsmokers. Spitting method was used for collection of 5 µL of unstimulated salivation. Spectrophotometric assays were used for the measurement of salivary CAT, vitamin C, and α-amylase levels. In comparison to nonsmokers, vitamin C level in smokers was fundamentally lower. In smokers, the salivary CAT levels were decreased and α-amylase levels were elevated, yet the distinctions were not factually critical. Smokers were more youthful than nonsmokers. Smoking brought about a change in salivary cell reinforcement levels. Changes in cancer prevention agent levels can impact the malicious impacts of smoking on oral mucosa; it may likewise show systemic changes and changes in the serum levels of oxidative operators. Etter et al17 gathered through mail self-detailed information on smoking propensities and saliva tests that were investigated for cotinine focus in smokers and nonsmokers. Members were individuals from the University of Geneva. The 207 participants who smoked only cigarettes smoke on average 10.7 cigarettes/day and had a median concentration of cotinine of 113 ng/mL. The cotinine focus was tolerably connected with the quantity of cigarettes smoked every day and was 54 ng/mL higher in men than in women after alteration for cigarettes every day and for the Fagerström test for nicotine dependence. The cotinine level was not related with the nicotine yield of cigarettes. In nonsmokers, the middle grouping of cotinine was 2.4 ng/mL. The cotinine fixation was 1.5 times higher in nonsmokers whose dear companions/life partners were smokers than in nonsmokers whose dear companions/life partners were nonsmokers. This investigation gave proof to the build legitimacy of both surveys and salivation cotinine for the appraisal of dynamic and latent presentation to tobacco smoke.

Ahmadi-Motamayel et al16 assessed vitamin C and CAT level in the saliva of human immunodeficiency virus (HIV)-positive patients and compared them with the findings obtained in healthy individuals. They evaluated 49 healthy subjects and 49 smokers. Sterilized Falcon tube was used for collection of 5 mL of unstimulated salivary sample utilizing the Navazesh method. Spectrophotometric assays were used for the assessment of salivary CAT and vitamin C levels. In subject group and control group, the level of salivary CAT was found to be 7.99 and 8.37 respectively. Nonsignificant results were obtained while comparing CAT levels in subject group and control group. From the results, they concluded that salivary antioxidant capacity could be altered by HIV.18 Nosratzehi et al15 assessed and compared the cotinine levels in the saliva of hookah smokers, nonsmokers, and passive smokers. They analyzed a total of 150 subjects, of which 50 were passive smokers, 50 were nonsmokers, and remaining 50 were hookah smokers. For the determination of salivary cotinine levels, ELISA kit was used by the authors. They observed that hookah users had maximum value of cotinine in the saliva in comparison with passive smokers and nonsmokers and further highlighted the importance of salivary cotinine levels in pathophysiology of smoking lesions.

Cotinine levels of saliva are altered by smoking. Harmful effects of smoking on the oral mucous membrane are influenced by an alteration in the antioxidant levels. Therefore, future studies are recommended for better exploration of this field of medicine.