That women in sex work are more prone to sexually transmitted diseases and psychological problems1,2 is a well-known fact. The overall rehabilitation of women in sex work is unfortunately limited most of the time only to move them to another profession, but focus should be on including health as an important factor.3 The focus in terms of health has always been on human immunodeficiency virus (HIV) and sexually transmitted infections (STIs),4 while oral health fails to find even a mention. For example, an estimate indicates 57% of all men and 11% of women between 15 and 49 years of age use some form of tobacco,5 leading to morbidity as well as mortality; still, it has managed to grab only attention, but no productive action. Oral diseases are preventable and even if this is a known fact, still, the burden of oral diseases keeps increasing worldwide. Educational level, income, occupation, socioeconomic status, and the community index are significantly associated with a greater occurrence of dental caries6 People with low income have the most limited access to education, prevention, and treatment. Factors that restrict regular dental care include misconceptions, dental fear and expense of dental care, unpleasant dental experiences, and socioeconomic factors,7 but such a direct correlation cannot be made in the case of such women under study. Until now, no study has been conducted related to the complete dentition status and treatment needs among the women in sex work. The aim of our survey was to evaluate the same among the brothel-based women engaged in sex work and the risk factors associated with it and fulfill the need for baseline data to further assist in the policy formulations and training of personnel for the provision of dental treatment resources.

The study was cross-sectional in nature. Ethical clearance was obtained from the Institutional Ethical Committee of Navodaya Dental College and Hospital, Raichur, Karnataka, and from Saheli HIV/AIDS Karyakarta Sangh, Pune, India. Women above 18 years of age in sex work in the red light district of Pune and who agreed to give voluntary consent for participating in the study irrespective of their medical ailments, such as HIV and other STIs were included in the study. The underaged girls/minors and those women who did not give a voluntary consent for participating in the study were excluded. The dentition status and the treatment needs of the women in sex work were assessed according to the World Health Organization Oral Health Assessment Form 1997.8 A pilot study was conducted on 30 women in sex work, to assess the feasibility of the study.

Based on the findings of the pilot study, the final sample size was calculated using the formula:

The calculated sample was 323, which was rounded off to 350. Systematic sampling technique was followed after line listing of the brothels at Budhwar Peth, Pune, Maharashtra, India. A total of 700 brothels were identified and sampling frame was prepared. We had planned to examine one woman from each house. To select the houses, a random number of 1 and 2 was selected using lottery method. The even numbered brothels were included in the study using the formula:

Of the 350 houses, 286 houses were covered. Others declined to cooperate due to their clients, police raids, and other issues. For the remaining 64, the odd numbered houses were also examined and the survey was completed. A written consent was taken from each of the participants, based on the Indian Council of Medical Research rules. Throughout the study, the examinations were carried out in front of the member of the Ethical Committee and staff from the Saheli HIV/AIDS Karyakarta Sangh. The data collected were subjected to statistical analysis done using SPSS version 16.0. Chi-squared test was done and p-value was decided at 0.05.

The majority of the women in our study were between 20 and 29 years of age (42.3%) (Graph 1). A total of 267 women were Hindus (76.3%), 82 (23.4%) were Muslims, and 1 (0.3%) was a Christian. Table 1 summarizes the prevalence of dental caries in these women in sex work as 272 (77.7%), and that 78 (22.3%) were caries-free. The mean number of decayed teeth per person was 5.05 (±4.81), missing teeth per person was 0.96 (±2.71), filled teeth per person was 0.04 (±0.34), and the mean of decayed missing filled permanent teeth per person was 6.05 (±5.84). We tried to assess if there was any form of statistical correlation between the dentition status and factors, such as age, marital status, diet, sweet score, presence or absence of a medical history, visit to the dentist, and substance abuse. As the age increased, there was an increase seen in dental caries experience (χ2 = 6.426, df = 1, p = 0.011). The prevalence of dental caries was higher among those women who had not visited a dentist before for their dental problems (χ2 = 22.886, df = 1, p < 0.001). The percentage of women with caries was higher among those who used finger to clean their teeth than those who used a toothbrush (χ2 = 4.524, df = 1, p = 0.033). There was no association between deleterious habits, substance abuse, the material used to clean teeth, frequency of cleaning, and time of cleaning as well as the type of cleaning with dental caries. There was no significant association between the types of diet, sweet consumption, such as amount, frequency, time, and type of sweet consumed with dental caries. There was also a neglect of the oral health among the women in sex work, with respect to dental visits and availing of preventive treatments from time to time.

Distribution of women based on the DMFT score and treatment needs

Distribution of women based on age group 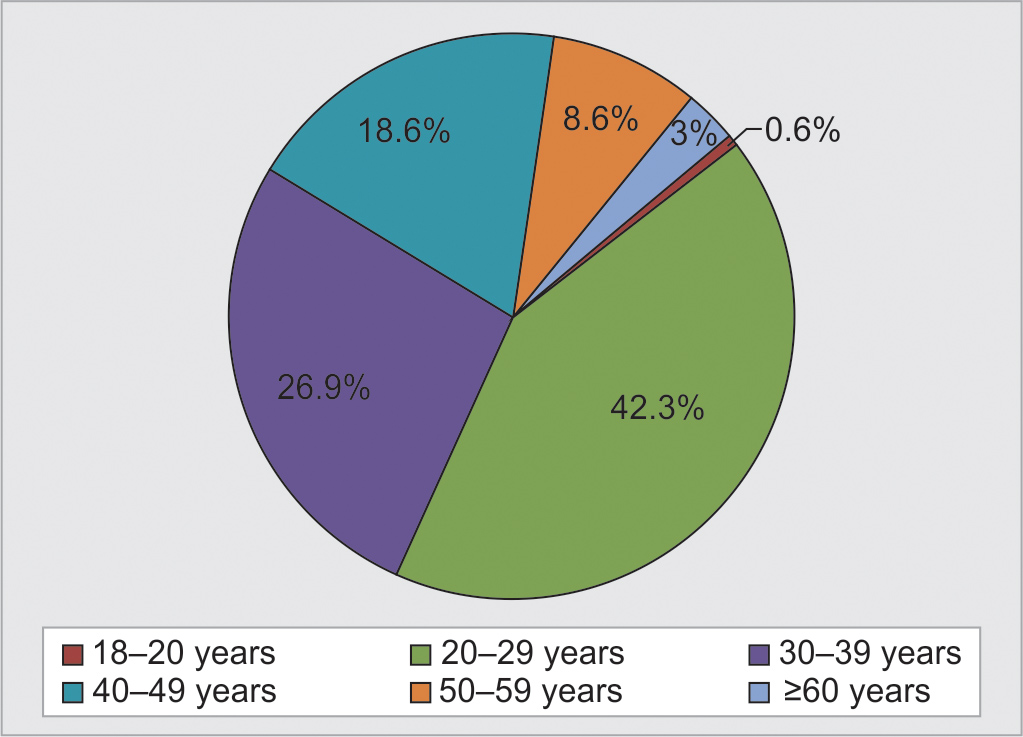 The present study consisted of 350 women engaged in sex work from Budhwar Peth, the red light district of Pune. All the women in sex work were establishment-based or brothel-based, similar to the study in Mumbai.9 However, it was unlike the studies in Andhra Pradesh, India,2 in Sonagachi, West Bengal, India;3 and in the study, in China,10 where even street-based sex workers were a part of the study population. Only a few women in our study (19.1%) were educated, while the rest were (80.9%) illiterate. The need for education as a medium of raising awareness and sensitizing these women in sex work not just for an optimum oral health, but also to help rehabilitate them with the rest of the society is a felt need in itself and its negligence is a hindrance to any form of developmental activity carried out targeting this special and neglected population. Although data on multiple live-in partners and regular live-in partners were not recorded since the women were unresponsive toward certain sensitive issues regarding their personal lives, nevertheless, these women do have unprotected sex with these partners, or lovers, which could be a reason for the spread of HIV and other STIs among these women. These women worked not just to feed themselves, but also their family far away from the brothels or for the education and future of their children, similar to studies from China10 and Mumbai (India).11 Studies have thus documented the fact that the women in sex work are vulnerable to a number of diseases apart from HIV and this results in complicated situations since affordability of medical services tends to be difficult.9,12,13 In the present study, the prevalence of dental caries was 77.7%. Women who used their finger to clean their teeth had more caries than those using a toothbrush. As age advanced, the women could possibly neglect their oral health, due to greater problems, such as losing clients to young girls and the growing financial and emotional insecurity in the future. This could possible pave the way for not just a risky behavior to attract more men, but also contribute to depression and neglect toward general and oral health. The use of charcoal, mishri, and toothpowder further compromise the oral health greatly. These materials do not possess the ability of aiding in cleaning the teeth; they instead add on to the local irritating factors and also lead to plaque accumulation due to improper cleaning, which can contribute to a greater number of caries. The workplace, stress, and the diet of these women coupled with lack of awareness, financial constraints, and disinterest toward oral health could also be contributing factors. These women are at a greater risk of suffering from various systemic illnesses that not just have their oral manifestations. Also, negligence toward oral health, excess medications that alter the oral flora, and negligence on the part of the general physician to insist on good oral health maintenance also contribute to oral problems.

Given the many problems that these women face, oral health-related issues also seem to be a concern, and hence, there is a need for sensitizing them with regard to the same. Due to different risk factors, such as diet, improper oral hygiene maintenance, and substance abuse, the overall dental health was found to be compromised in this population. Economic burden is an important factor that influences their attitude toward oral health, and is likely to be inherited by their next generation also. These factors need to be taken into account and a separate, comprehensive intervention be applied concentrating on such a key population facing increased risks of poor dental hygiene; assistance to these women in whichever way possible to help them achieve optimum oral health should be essentially practiced.